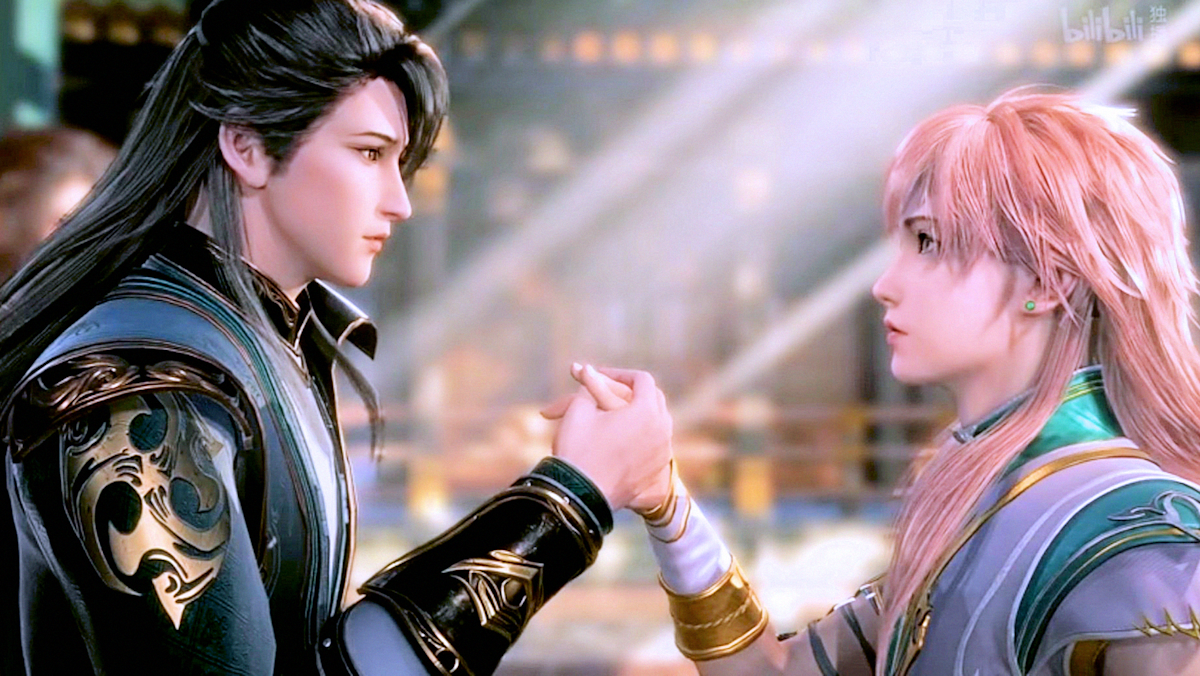 Psycho-milk is proud to publish our first critical look at an Anime. This on-air Donghua (Chinese anime) is new and has gorgeous CGI. Check out our review of Episode 1

Legend of Exorcism is an ongoing fantasy anime series based on the adaptation of Fei Tian Ye Xiang’s (非天夜翔) Chinese web novel of the same name. Produced by Sparkly Key Animation Studio, this donghua airs every Sunday on the 哔哩哔哩动画 Anime Made by Bilibili YouTube Channel.

The series follows the journey of Kong Hongjun after he leaves the Yaojin Palace on the Taihang Mountain. He has been assigned three important tasks and arrives in Chang’an, a city full of prosperity, and is a major attraction for demons. Kong Hongjun enters the Datang Exorcism Division, and along with Long Wuhan General Li Jinglong, they battle the demons to maintain the peace and prosperity in Chang’an. The show also majorly focuses on the budding romance between Hongjun and Jinglong.

Kong Hongjun has been raised as the Young Master of the Yaojin Palace. His biological father, Kongxuan, was a mixed breed of God and Demon. As with that, Hongjun has inherited his birth father’s magical abilities.

Chongming is the Demon King and also the Head of the Three Lords of Yaojin Palace. He was Kongxuan’s best friend and bought up Hongjun as his own son after Hongjun’s father’s death.

Zhao Zilong is Hongjun’s pet, as well as his closest friend. Although a carp demon, Zilong is kind, cares about Hongjun, and is his guide in the human world.

In the Tianbao Period, Kong Hongjun, a young man who was ignorant of worldly affairs, came to Chang’an with three important tasks and entered the Great Tang’s Exorcist Department. Inside the department, he led a ragtag group of Yao-vanquishing experts together with Li Jinglong, commander of the Longwu Army. Legend of Exorcism is the story of how they wrote out the Great Tang’s Yao-vanquishing Records.

The Manhua adaptation begins with an untold historic battle between Kongxuan and King Stillness. The King condemns him for choosing to live in the mortal realm, despite his demon blood. The battle is of equals, and King Stillness is unable to overcome Kongxuan’s fly cutter’s magic. In a bid to win, the King targets Kongxuan’s family. To save them from King Stillness, Kongxuan sacrifices his own life.

Twelve years later, Qing Xiong receives a mysterious letter and seems worried. Meanwhile, we are introduced to Hongjun and his pet demon Zhao Zilong. Hongjun is the Young Master of the Yaojin Palace and has a cheerful demeanor. Zilong worriedly asks Hongjun to get down from the rooftop, as he sits there churning some medicine for his father in a pestle.
He jumps down, swirls, and alights into the main courtyard, where Chongming sits majestically on his throne. Hongjun blows the medical cure, and the wind carries it to Chongming. However, Chongming sneezes, and the entire courtyard catches fire. It is quite clear that Chongming is a very powerful demon.

Later, Qing Xiong arrives with the mysterious letter and notifies Chongming that it is from the Court of Exorcism. They are recruiting young men to prepare them for the arrival of the Holy Demon. Chongming refuses to say that Hongjun isn’t ready yet. Xiong urges him to rethink his decision because demons are at large. Chongming asserts that they themselves are demons. Xiong is surprised and reminds him that 200 years have passed since their battle with the Black Dragon, where the Dragon was defeated. His return must be stopped, or the entire mortal realm could be destroyed.

Chongming loses his calm and calls mortals ungrateful. In a fit of anger, he reveals that they lost their third brother because of the mortals. His son, Hongjun, born to a mortal, was left in his care. Unfortunately, Hongjun enters the courtyard just then and hears the conversation. Further, Chongming insists that he won’t send Hongjun to assist the mortals. Xiong reveals that Kongxuan, their third brother, was a mixed breed of God and Demon, and as such, Hongjun has inherited his capabilities and can stop the Black Dragon.

Both of them finally notice Hongjun as he runs away from the courtyard. Xiong follows him to the fields, and Hongjun cautiously asks the truth behind his birth. Xiong explains that his birth father Kongxuan was the reincarnation of the Peacock King, and his mother was a mortal. Xiong himself is the Golden-Winged Roc, and together they both served Chongming the Phoenix, who is the Demon King. Xiong understands that Hongjun wants to visit the mortal realm. He further reveals that the Black Dragon stabbed Chongming with Fire Toxins and took his place as the Demon King. Hongjun’s parents were killed, and Xiong bought him to the Demon Realm. Chongming has since raised him as his own son.

They are back in the courtyard where Chongming resolutely confirms the story that Xiong shared and asks Hongjun to return to the mortal realm. Hongjin refuses to leave his Father’s side, but Xiong assigns him three tasks. Xiong explains that Di Huaiying, Kongxuan’s old friend, had set up the Court of Exorcism before his death. He hands over the letter to Hongjun and instructs him to join the Court. His first task, however, is to seek out the murderer of Kongxuan. Next, he hands him the peacock feather left by Kongxuan and assures him that he can kill the unruly demons in Chang’an. Thirdly he hands over the Heart Light given by Dark Citadel’s King Kun to Hongjun and orders him to find the Chen Shiyi or his descendants. Xiong asks him to become friends with the bearer of the Heart Light and use his assistance to find the truth.

As Hongjun starts on his journey to Chang’an, Zhao Zilong accompanies him. They reach a village and find it entirely demolished. As they search around, they are attacked by a Turtle Fish Demon. A battle ensues, and Hongjun uses his wind and thunder fly cutters to injure the Demon. His fly cutters heavily injure the Demon, who escapes and seeks refuge in the city of Chang’an.

My Opinion About This Anime Series

As my first time watching an anime series based on manhua adaptation, I must say it’s pretty intriguing. The only reason that I picked up this series was its similarity to the Untamed series storyline. The novel Tian bao Fuyao Lu is quite popular, and fantasy is my favorite genre. The similarities are discernible when it comes to the actual magic wielded by the main leads. Unlike Lan Wanji and Wex Wuxian, who are cultivators, here we have Hongjun, who is a mixed breed while General Li Jinglong is mortal. I’m really interested in understanding the mystery surrounding Kongxuan’s death. Why did he retire to the mortal realm and marry a mortal? Was the offense so unforgivable that the Heavens decided to punish him with death?

Chongming is certainly overprotective of Hongjun, and he’s been sheltered his entire life. How will the Demon Prince survive in a new environment? I’m surprised by their dynamics because watching Hongjun address the bare-chested hottie Chongming as “Daddy” is pretty shocking. He is still a child at heart, and I’m afraid of how he will be able to fight the demons plaguing the city of Chang’an. Overall, I’m enjoying this anime because of the invariably handsome characters and the thriller elements that come at you out of nowhere. The Sparkly Key Animation Studio has orchestrated stunning CGI effects into the anime series, which leaves you breathless. It keeps you on edge, and you are hooked up on this adaptation in no time. Keep watching this space for further updates on this ongoing fantasy saga!