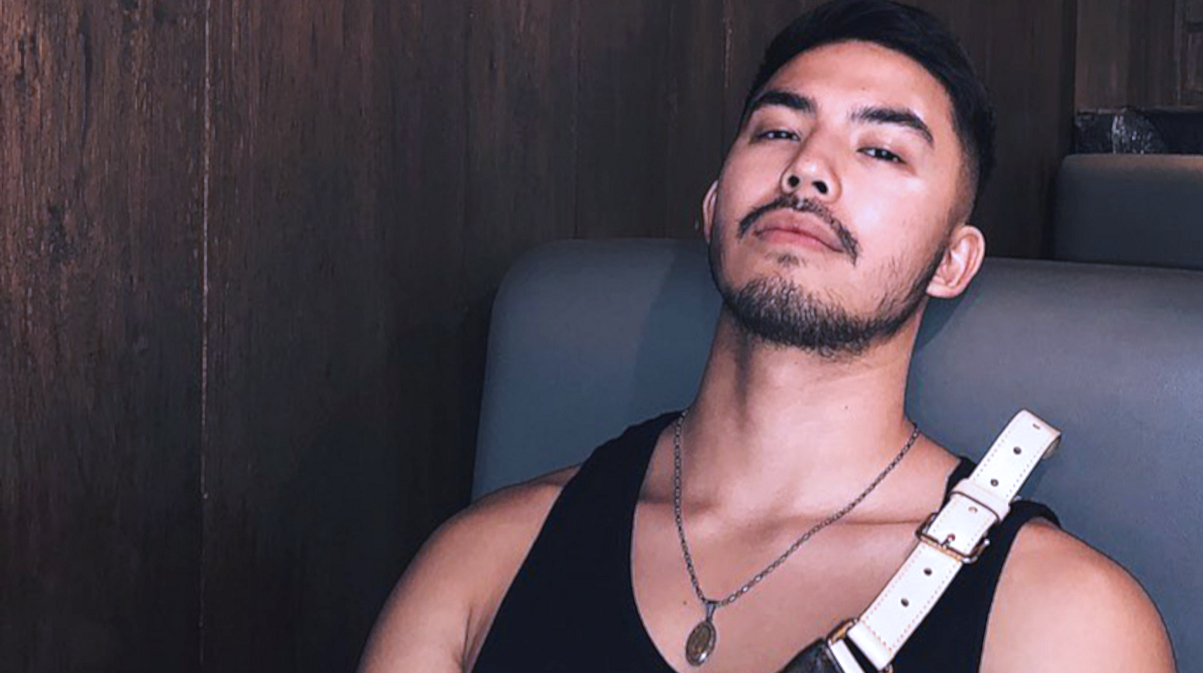 Anthony Angel Jones Labrusca, Jr. or Tony Labrusca was born August 7th, 1995, in Houston, Texas, United States, and is a Filipino-American actor, recording artist and commercial model based in the Philippines. Labrusca gained his popularity via a McDonald’s Philippines TV ad in 2016, Tuloy Pa Rin. He is the current heartthrob in the erstwhile Filipino circuit for his portrayal of Xavier de Guzman in popular Pinoy BL sitcom “Hello Stranger.”

Tony as an Actor

Tony isn’t a newcomer when it comes to his proficient acting or singing talents. Before auditioning for Pinoy Boyband Superstar, Tony had already stamped his presence in the advertisement world. But he gained widespread popularity when he became viral with the McDonald’s TV ad entitled Tuloy Pa Rin in 2016.

His charming looks coupled with his soulful singing propelled Tony into the top contender’s position, and he proceeded to the Top 7 slot for the Grand Finale. However, he did not make it to the Top 5 of BoybandPH. He made his acting debut in 2017 with TV5’s Wattpad Presents with Louise Delos Reyes and later played significant roles in La Luna Sangre, Sino Ang May Sala, Ipaglaban Mo: Saltik.

Tony recently shot to fame with his poignant portrayal of Xavier’s in Pinoy BL drama “Hello Stranger.” When the pilot episode premiered, Xavier was largely depicted as Basketball Player who gets paired with the nerdy student Mico. The pairing was underrated, and there wasn’t much scope for romantic sojourns. Despite that, both Tony and his onscreen partner JC Alcantara broke through the mold and rewrote history. Their journey begins as frenemies, where the disciplined Mico fights his attraction to Xavier while trying hard to school him about their joint project.

Tony, as Xavier, belies the old school charm and arrogance that most jocks broadcast. It is already assumed that Xavier’s assigned partner will be doing most of the work on the project, and Xavier is just in it for the passing grade. But Mico is not to be trifled with and is well-prepared to handle this pompous jock. As their relationship changes lanes and they settle into an odd friendship, “out of the blue” Xavier’s girlfriend Crystal breaks up with him.

The storyline then moves into the pair’s more-than-friendship entanglements as Mico becomes the emotional support that Xavier needs. I was pretty amazed by Tony’s acting chops. The transformation is so discerning. From an individual who finds nerdy interactions boring to finally becoming someone responsible, Tony shoulders the entire act with ease and makes Xavier entirely believable. However, things go wrong in their paradise when Xavier expresses his feelings, and Mico uncharacteristically brushes them off. It’s Mico’s inherent insecurity at play, but it stops Xavier’s confidence in an instant. With “straight man’s bravado” running rampant between the two of them, Xavier jokingly agrees with Mico’s assessment that the song was for Crystal.

They then both go through an extended period of separation where Mico stops talking to him, and Xavier is in pain because he doesn’t know the reason for the apparent dismissal. We must appreciate how Tony embodies Xavier’s pain and how effortlessly he makes us feel the anxiety as well. My favorite scene will always be the one where they both perform their skit, and later, Mico decides that there is no need for them to talk anymore. Xavier finally breaks down, and although he wants to beg for a second chance, he quietly demurs. Xavier’s tears make you realize how much Mico means to him, and he doesn’t want to give up on their relationship.

We must understand that their romance was hugely limited to online interactions, so shooting for the show wasn’t an easy feat. Coupled with an ingenious mind like Director Petersen Vargas, Tony and JC drew up a storyline that transcended continents and is now dominating the international BL circuit. The finale of this show is one of the most anticipated ever as we delve deeper into their issues and hope that they would clear their misunderstandings. Tony has managed to infuse Xavier with a breath of fresh air. His performance highlights the contrast between Xavier’s arrogant old self and the gentle new one and is very well executed.

His Chemistry with JC Alcantara

Hello Stranger was an ambitious project steamrolled by the ABS-CBN network. The anticipation about the pending chemistry between the main leads was the talk of the town. Tony and JC didn’t fail in creating enthusiastic chemistry between Mico’s shy exterior and Xavier’s sweet interior. Xavier is a largely misunderstood character, not just the fandom but also by his own girlfriend. When Xavier is paired with the nerdy Mico, he is drawn towards Mico’s honesty. Xavier admires him and tries hard to emulate Mico. Going through a difficult break up can push you into depression, and Xavier wears his heart on his sleeve.

Although their lack of intimate scenes characterizes initial Pinoy BL as compared to Thai BL dramas, Tony and JC’s chemistry speaks volumes. The tiny details like Xavier wanting to be a part of Mico’s social circle or writing for a song symbolize their love story. It’s believed that Xavier always identified himself on the straight side of the spectrum of sexuality, but that doesn’t stop him from expressing his feelings of affection to Mico. Although they are both going through a denial phase, it doesn’t change the fact that Xavier always looks at Mico like he hung the moon. So much so, that even getting back with ex-girlfriend Crystal doesn’t make him happy. I’m enjoying the sheer honesty with which Tony plays the character role. He displays Xavier’s nonchalant attitude as well as his romantic side effortlessly. Xavier experiences pain as well as confusion like any normal individual, and Tony’s realistic approach is praiseworthy.

In various online interviews, JC has admitted that Tony is extremely sweet and caring. While JC had problems trying to style his hair, Tony was the one who would help him out because he has worked as a barber. Tony might be a star, but he is extremely proud of his humble background. JC reminisces that working with Tony was an enjoyable experience. Both have affable chemistry onscreen and a good friendship offscreen.

Tony as a Person

Tony is the son of popular Filipino actor Boom Labrusca and Filipina singer Angel Jones. He was born in Houston, Texas, United States, and grew up in Los Angeles, California, with his mother, step-father Boom Dayupay (ex-Kulay member), and sister. He barely knew this biological father and is said to be reunited with Boom during his Pinoy Boyband auditions. When he was 9, his family moved to Vancouver, Canada. Tony had very humble beginnings and earned a living by being a cook, a shoe salesman, and a cashier simultaneously, and then working as a barber. He attended Saint Anthony School in Las Pinas and International Christian Academy in Paranaque.

Just a few years ago, Tony decided to move to the Philippines and pursue a career in the entertainment industry. Tony is a self-made talent, which is characterized by his pride in his achievements. Tony was quoted in an interview with Rappler Entertainment

I felt proud of myself when I made an active decision to move here to the Philippines and be independent. When I started booking work and was able to provide for myself, I think that’s when I realized that this time, I can really be proud of myself because I didn’t have to ask for my parents’ help.

Tony is extremely enthusiastic when it comes to challenging himself as well as his acting talents. He is also the brand ambassador of Lee Jeans, along with several other endorsement deals. He often talks about his determination to make a name for himself in acting and to continually test his own limits.

In another interview with Garage Interview, Tony was quoted as saying:

I have so much drive. I feel like a jack of all trades but a master of none, so I just want to be really good at acting. I want to know that I am really good, that I can compete and beat other people before I give up.

Tony Labrusca is surely an enigma because, despite his handsome looks, he has a gentle demeanor. He is known to be extremely respectful and prefers to maintain his natural looks overall. He is also known to be quite thoughtful and doesn’t display the normal air of a celebrity. His sweet nature is apparent from his online interactions with his fans and colleagues.
Despite being born and bought up in the US as well as Canada, Tony is a true blue Pinoy at heart. He has often mentioned his emotional attachment to his motherland Philippines and ardently loves the Filipino culture as well as his people. It’s part of his heart and soul. Tony was always into schooling and driven by an urge to create. He reckons that this was one of the main reasons for his return to the Philippines.

Psychomilk salutes his limitless efforts to create a name for himself in the Pinoy industry, and here’s hoping that we get to watch him play more mature and varied BL roles in the near future!