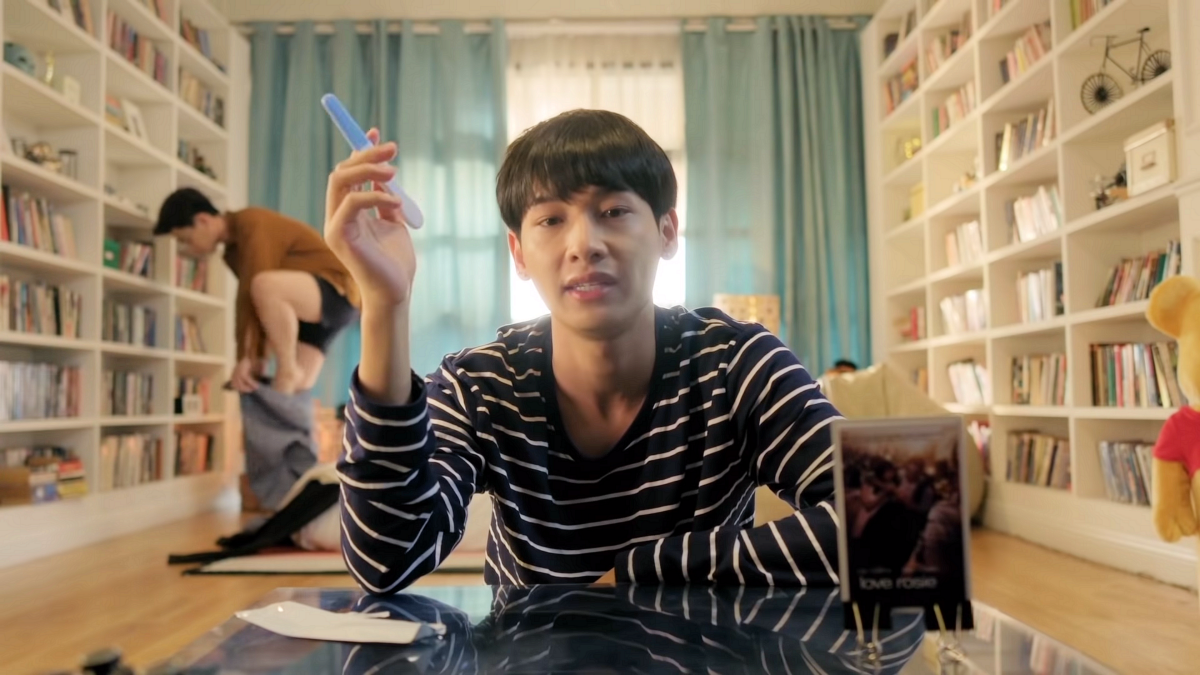 Love. Such a strong emotion and this is the main drive and attraction that keeps viewers glued to each and every episode of Theory of Love. The series stars Off Jumpol and Gun Atthaphan playing the now iconic parts of Khai and Third; both are film majors in the university and are conflicted because of the emotion that acts as an invisible member of their cast.

The series is based on the Thai novel of the same title by JittiRain. Since the initial showing of the teaser by GMMtv late 2018, there had been a build-up of excitement leading up to the airing of this series.

The main couple, actors Gun Atthaphan and Off Jumpol, are formerly known by their characters in the two series Senior Secret Love: Puppy Honey Seasons 1 and 2, and one of the featured couples in the 5 episode anthology Our Skyy. The characters they originally played in Puppy Honey, Rome and Pick, spawned countless fan demands that the pair have their own series. Hence, Theory of Love was born. Apart from the obvious chemistry between the two actors, just what makes Theory of Love click despite the fact that viewers need a healthy reserve of tissues for each of the episodes? As for playing film students in the series, it was a brilliant conceit to incorporate references to well-known romantic comedy movies the script into each of the individual episodes. These references are for movies that have made a significant impact on romantic film enthusiasts everywhere.

You can watch the series via official GMM-tv channel and here is the playlist. References are available on Twitter.

Episode 1 – Titled ‘Best Friends’ was a great introduction to the character of Third and how his life revolves around his hidden feelings for his best friend, Khai. While it was a painful eye opener for viewers, it also allowed us to invest not only our time but our emotions in each of the succeeding episodes. And with each tear that falls from Third’s eyes, we await with bated breath for what comes next.

Episode 2 – was the series’ salute to the Hollywood film, Love Actually. A great follow-up to the introduction as like the Western Film, Theory of Love Episode 2 shows the intricacies of the different characters and how their stories and relationships connect and are dependent on the result of each of their moves. Its like a chessboard where a move prompts a different move from each of the individual player.

Episode 3 – dissects more of the complex relationship that Third and Khai have. This is painful to see while we view Khai being indifferent to what Third feels. It’s only because we are witness to the struggles that Third goes through. In fact, we know his thoughts. But if we really look at it, at this point, Khai does value Third in his own weird way.

Episode 4 – Crazy Stupid Love. What can I say, Love certainly is a crazy and stupid feeling. No matter how we try to stop our emotions, they tend to push us to do things that we normally wouldn’t do. It defies reason, it stops us from using our heads and instead propels us to do things for people even though sometimes it hurts us in ways that we don’t really understand.

Episode 5 – 10 Things I Hate about you. This was a really special episode. For me especially since the movie where it got its inspiration is one of my all time favorites. Even the sequence when Third did the reenactment of one scene from the movie was spot on. But what really tugged at my heart was in how I remember the feeling it gave me as I thought back on the words of the poem written by Julia Stile’s character Kat. This poem exactly describes how Third is feeling and the conflict that he has with his own thoughts.

Episode 6 – Eternal Sunshine of the Spotless Mind is a 2004 American film written by Charlie Kauffman and directed by Michael Gondry. It follows an estranged couple who have erased each other from their memories, then re-met and started dating again. In the series, the element of forgetting painful memories as a way to erase pain and move on is tested. But then by this time, halfway through the season, we are all so invested in Third’s pain, we know how hurting it is for him and while we are not numbed but we see ourselves at one time in our lives when we loved and our love was just not enough.

There are certain films that make up the theme of various episodes. Some of them are:

10 Things I Hate About You is a 1999 American romantic comedy film directed by Gil Junger and starring Julia Stiles, Heath Ledger, Joseph Gordon-Levitt, and Larisa Oleynik. The screenplay, written by Karen McCullah Lutz and Kirsten Smith, is a modernization of William Shakespeare’s late-16th-century comedy The Taming of the Shrew, retold in a late-1990s American high school setting. In the story, new student Cameron (Gordon-Levitt) is smitten with Bianca (Oleynik) and, in order to get around her father’s strict rules on dating, attempts to get bad boy Patrick (Ledger) to date Bianca’s ill-tempered sister, Kat (Stiles).

Crazy, Stupid, Love. is a 2011 American romantic comedy film directed by Glenn Ficarra and John Requa, written by Dan Fogelman, and starring Steve Carell, Ryan Gosling, Julianne Moore, Emma Stone, Marisa Tomei, and Kevin Bacon. It follows a recently divorced man who seeks to rediscover his manhood and is taught how to pick up women at bars.