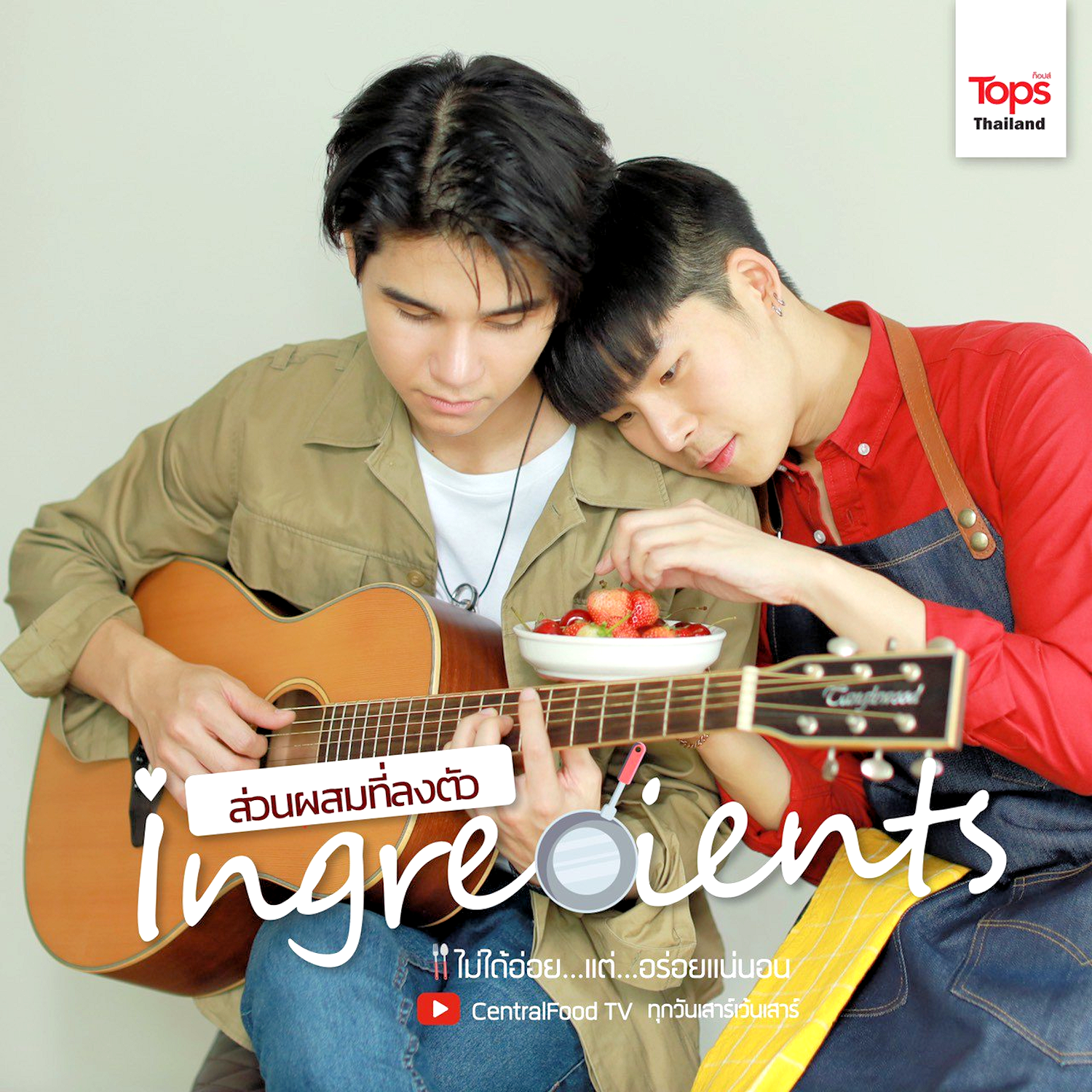 Jeff Satur and Gameplay Garnphapon’s adorable romance in Ingredients is stealing everyone’s heart. While their sensual chemistry in HeSheIt was much appreciated, this gourmet love saga is miles apart, yet enviable. Top & Marwin’s loving gazes and shy expressions make your heart flutter, and you wish they would get together.

Let’s travel further into the kitchen and see what is happening in our cute couple’s lives.

This episode was so fulfilling; I still get goosebumps thinking about it. It’s Marwin’s birthday, and his friend invites him out for a party. He totally forgets about inviting Tops for the same, and I almost feel bad for him. But that doesn’t deter our Chef, who has heard the entire conversation. He starts preparing a delicious “Dome Cake” for Marwin. I actually found the picture of the cake on Ingredients’ official Instagram. The message accompanying it is so sweet, “Whatever you wish may it be fulfilled” because this is exactly what Tops would want for Marwin from the bottom of his heart!

As Marwin walks down the staircase, the entire house is dark. Tops calls him to the kitchen and asks Win to hold the plate while he is icing the cake. Win obviously doesn’t have any idea of what Tops has planned and is impatient to leave. Tops then asks him to close his eyes and lights a candle. When Marwin opens his eyes, he realizes the cake is his gift and is overwhelmed. The way they look at each other itself describes their relationship. Marwin, at last, realizes that he never asked Tops to join the party. The episode ends with a happy Tops rushing off to change while Win reassures him that he will always wait for him.

I really loved the meaning behind this episode. At times, we take the important people in our life for granted, despite everything they do for us. Marwin’s realization of this is actually a message to the audience, “We should make time for our loved ones and nurture the relationship as much as they do.”

Although Gameplay is good, it’s Jeff who steals the limelight. His expressions are so honest as he realizes how much effort and thought has been put into the cake. The guilt is manifested, but Win makes up for his mistake. Also, Jeff, with spectacles, is damn hot! This is by far my favorite episode in this series.

This episode, I discovered that I have a major crush on a jealous Marwin because he is impertinent and also entirely hilarious. Tops and Win play Rock, Paper, and Scissors to decide who will clean all the bathrooms. Win loses miserably and throws such a big tantrum about it. I’m honestly surprised that Tops didn’t give in to his demands as usual.

Win is totally whining while cleaning up the bathroom, and Tops can’t help smiling at his adorable antics. He walks to throw the garbage when he bumps into their new handsome neighbor. Their neighbor seems to have injured his hand, and Tops goes to help him. The neighborhood-friendly guy immediately shares a basket of fruits with Tops. As soon as he gets back home, Tops starts cooking. Today’s menu is “Spicy Mackerel Salad with Quinoa.” Win rushes in, realizing that Tops has cooked something new. But he is shocked when instead of feeding him, Tops gives with the plate to the neighbor.

Win is such a drama queen. He literally hangs his arm in a cloth sling and cries out about getting hurt while cleaning the bathroom. Tops can clearly see through the act and gets him a plate of the salad. When Tops indirectly asks him about his behavior, Win readily accepts, “I was afraid that you wouldn’t cook for me anymore” But of course, his jealous tone makes his feelings quite visible. Tops calms him down, saying, “I will always cook for you, no matter what.” They share a long lingering gaze full of love!

I love their chemistry. Gameplay is such an excellent actor; I’m continually surprised by him. His acting skills in both “Ingredients” and “HeSheIt” are so widely varied, yet so subtle. On the other hand, Jeff Satur’s “Marwin” has a childlike exuberance, which always makes me smile. I am enjoying watching him act like a spoiled kid with Tops, just because he can. They haven’t confessed yet, but the feelings are close to the surface.

Keep watching this space for more updates on our Gourmet Couple as we follow their journey through food and love!