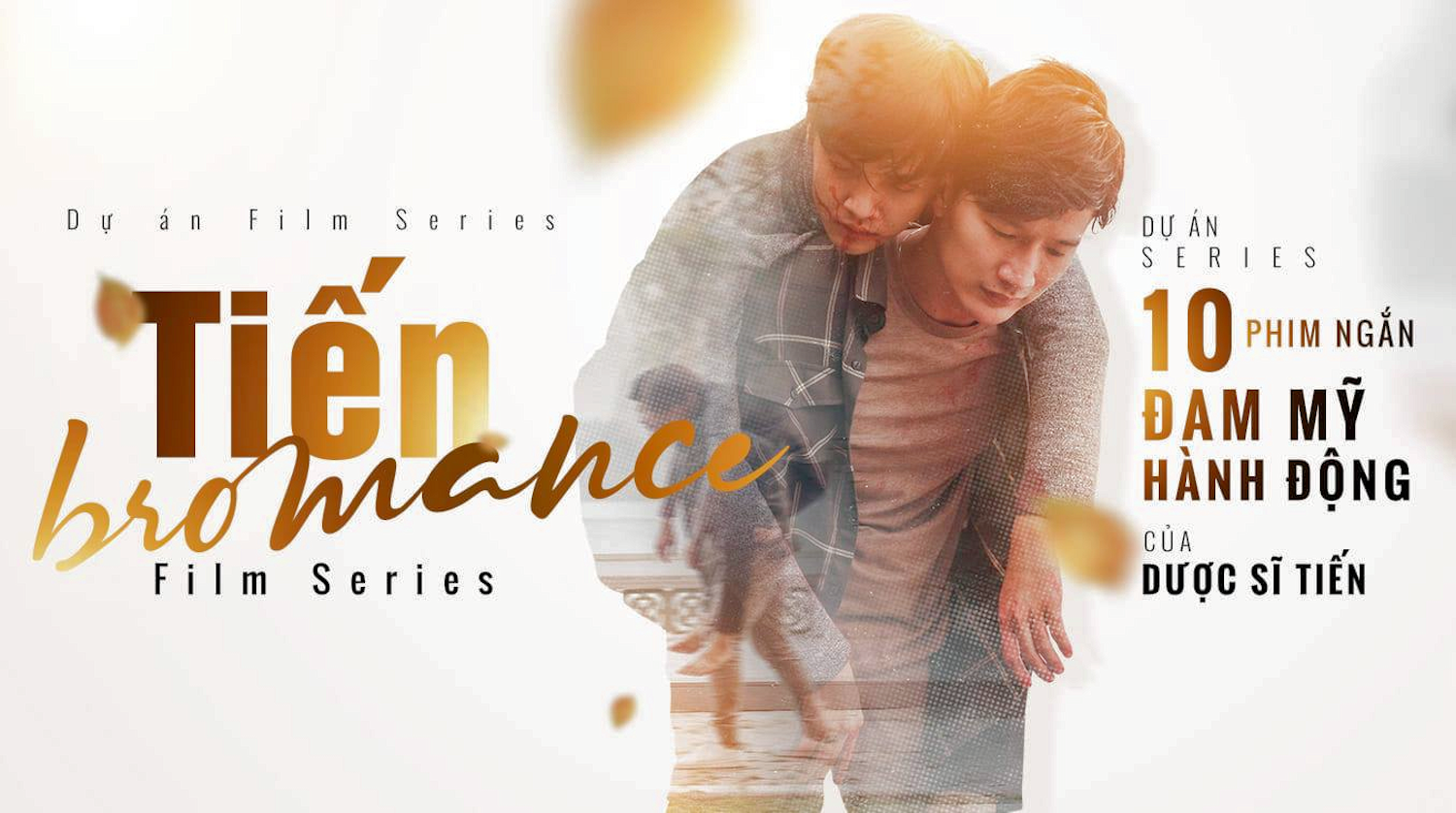 The Vietnamese series “Tiến Bromance” is a unique show in many ways. Each episode is shot like a feature film. Each episode depicts two men who have known each other for a long time at a different time in their lives and acts as a complete story with its own ambiguous ending.

You can choose where to stop. Often I considered it, not because the show is bad, it’s my new favorite show. But because the content is so violent and unflinchingly honest, it is hard to watch. Unlike most shows made for international viewing, this show never softens the harshness of life and instead shines a light on many things we pretend we don’t see.

The cast of Tiến Bromance is primarily Tai and Tiến in the series. Because of the fact that each episode is essentially a short film that gives us a glimpse of these two men’s lives, the rest of the cast is ever-changing. The only character who appears in multiple episodes is Hong.

As the title character, Tiến is the strongest person in the series in a lot of ways. Using martial arts to protect him or his lover, Tai, Tiến acts as Tai’s rock in these hard times and helps keep Tai sane. Played by the incredible Phạm Minh Hữu Tiến, Tiến is a kind, sentimental man who makes decisions from the heart. Unfortunately, these decisions often result in his lover Tai being brutalized, tortured, or beaten. It’s interesting how he was even allowed to make a decision at all. I found myself screaming at my phone as I watched scenes where he was given an option and went with the more dangerous or risky one, every time. Again these are separate but linked stories, so each decision happens in a different moment in their lives together. This allows the viewer to assume he has made better choices in between them.

Tai is even stronger in many ways than Tiến even if he isn’t the one doing the Jackie-Chan-fight-scenes. He is played by Trei Pharm with quiet grace. It is implied from episode 1 that he is gay and has very little in common with the other characters. This proves true in episode 2 when he sits down with Hong, and flat out accepts it. It’s unique for a BL to display such defiance to the social norm of a gay man being unapologetic for his sexuality. Instead, Tai is proud of who he is and faces most confrontations about it with confidence. His duality, though, is that beneath that confidence is a raw and tender person who hurts. In the style of modern anime, he carries every scar physical or emotional with him throughout each episode. Suffering from torture involving live snakes at the hands of many nameless men, he shies away from being touched by anyone who isn’t Tiến. Tiến is the only person who has never harmed him.

As Episode One starts, the show depicts seven characters coming to stay at a weekend getaway. The impression is some are closer to each other than others, while the main characters Tien and Tai are outsiders welcomed into the group. Soon drinks are served, and lips begin to touch as inhibitions are thrown to the wind, and it almost feels like an orgy is about to occur. Instead, one random accident highlights a level of tension between the five closest friends.
That seemingly random moment is one that becomes the foundation for how every episode plays out. In episode one, it’s the two characters choosing to keep the highly sexual mood going by taking it outside. Unbeknownst to them, there is something in the woods surrounding the vacation home. I won’t spoil what it is, but this malevolent presence soon overtakes the scene, and the episode descends into a horrifying night of terror for the other six.

If the entire show kept that level of real horror, it would be easier to classify it and to accept the things I saw as I felt like Alice into this modern-day tale of horror-filled Wonderland. However, by episode 2, the mood shifts. Gone is the wound-up intensity of watching the survivors of episode 1 fight for their lives. In its stead, Tien stands dressed nicely, with no signs of bruising or any mental scarring. Gone are the endless woods and their bleakness. Instead, there is a sunlit street and a feeling of hope. Hong arrives dressed way too sexy for a simple bike ride while Tai stands back in the shadows watching the scene.

I didn’t know it then, but that is how the show does things. Unlike other Boys Love dramas, this one explains nothing. It changes without warning, The dark foreboding forests of the first episode are replaced with brightly lit modern splendor. Even the music of the 2nd ep was changed to offer a more somber atmosphere. It is clear the creators of this show know what they are doing. They offer the viewer just enough detail about a scene to create a feeling, and then in the next scene, they abruptly change it. It sounds somewhat disjointed but is actually the opposite. Every succeeding scene plays off of the previous scene, growing from the little details shown to you, effectively forcing you to assume what you believe is going on is a logical progression, then yanks the rug out from under you. The episode then proceeds to recreate a new mood as more characters are introduced.

I am trying to keep this as spoiler-free as possible because a large part of the charm of the show is learning about these characters and their unique place in each other’s lives as the story progresses. Episode 2 deals with sexuality and social stigmas with a candid honesty not seen in Thailand BL’s. Unlike many BLs where a character is struggling with their sexuality, Tai is fully aware of the fact that he is gay. When confronted about it, he stands behind his love without flinching. However, this is the world of Tiến Bromance, and the response to this affirmation is heartbreaking and emotionally damaging to him.

I enjoyed watching the way the actor who plays Tai portrayed his fraying confidence as he faces confrontation after another. This next bit is a spoiler, so feel free to skip to the next paragraph. In the scene with his mother, a simply mistaken loss of time blossoms into a tense conversation. What sets it in my mind as one of the best scenes in the series is what isn’t said. Tai is fresh from his confrontation with Hong and arrives home to his mother. She sits behind a table full of food she made for them. He apologizes and asks her to eat without him if he is late again, and she explains along with a thick application of guilt of why she won’t. She says that she could eat without him if he had a wife with whom she could eat. There at that moment, you see Tai flinch. Under her watchful gaze. She displays the natural order of things while he says “Mom” over and over his voice growing smaller and smaller until she concludes it. Muted, he attempts to eat, but she has a violent heart-related attack, and he rushes for her medication. He saves her despite her cruelty to him and returns to eating but is trembling so badly he can’t. The Second Episode relies on only one fact within it. Who died?

Moving forward, Tai maintains his belief that there is nothing wrong with being gay. The story turns it’s teeth on him in a variety of ways, and that is its true horror. Whether it’s through the verbal shouting with cruel words spoken, or at the hands of nameless men who brutalize him, Tai is the victim of horror upon horror displaying the ever-escalating level of extremes to which the show will go – and it’s only the second episode. With the amount of story it covers, I felt like I was watching an entire TV season in one episode that wasn’t even one hour long. That is the format of the show. Each episode is thematically a short film depicting Tai and Tine at different moments in their lives. This method of telling the story can be slightly confusing as some episodes are months apart, and some are only separated by hours. The only way to know is to watch more than the first few minutes.

My Opinion About This Drama
The dialogue in this series is fast, set against an interesting and well-chosen selection of Jazz music. The music of the show provides a soul for it in every scene. It provides an intimate window into the lives of these young and beautiful people. Each episode is presented with one superficial trait that is cast aside quickly when something you think of as small. Think of a pristine shot of a clear glass of clear water, with blood suddenly poured into it, contaminating the water – that can change the very mood of the episode.

Unlike in other BL shows, this one chooses to depict every facet of these characters. You see their good and bad qualities not as implied but shown through their actions, and I appreciate that. It creates a new and entertaining series simply by letting the characters be themselves. Unlike the remaining five episodes, this one features a supernatural aspect that brings out the worst in these people, similar to those in Sam Rami’s “Evil Dead.” This sort of thing doesn’t happen again but does showcase the darker tone of the show. By doing so, it prepares you for the graphic depictions of torture and heinous acts that will make some shy away. What I find truly new is that the worst acts in this show are acted out by humans and not an evil presence, it hits harder this way, and at times even I had to hit pause.

There are several moments where things that go unspoken come out louder than any voice in the way the actors portray these well thought out characters. Watching Tai grow smaller and smaller as his mother dominates the conversation is telling of their dynamic. The horror of the show isn’t supernatural after the first episode but instead by the actions of the men and women who populate the series going forward. It almost makes the first episode feel unnecessary outside of the occasional flashbacks.