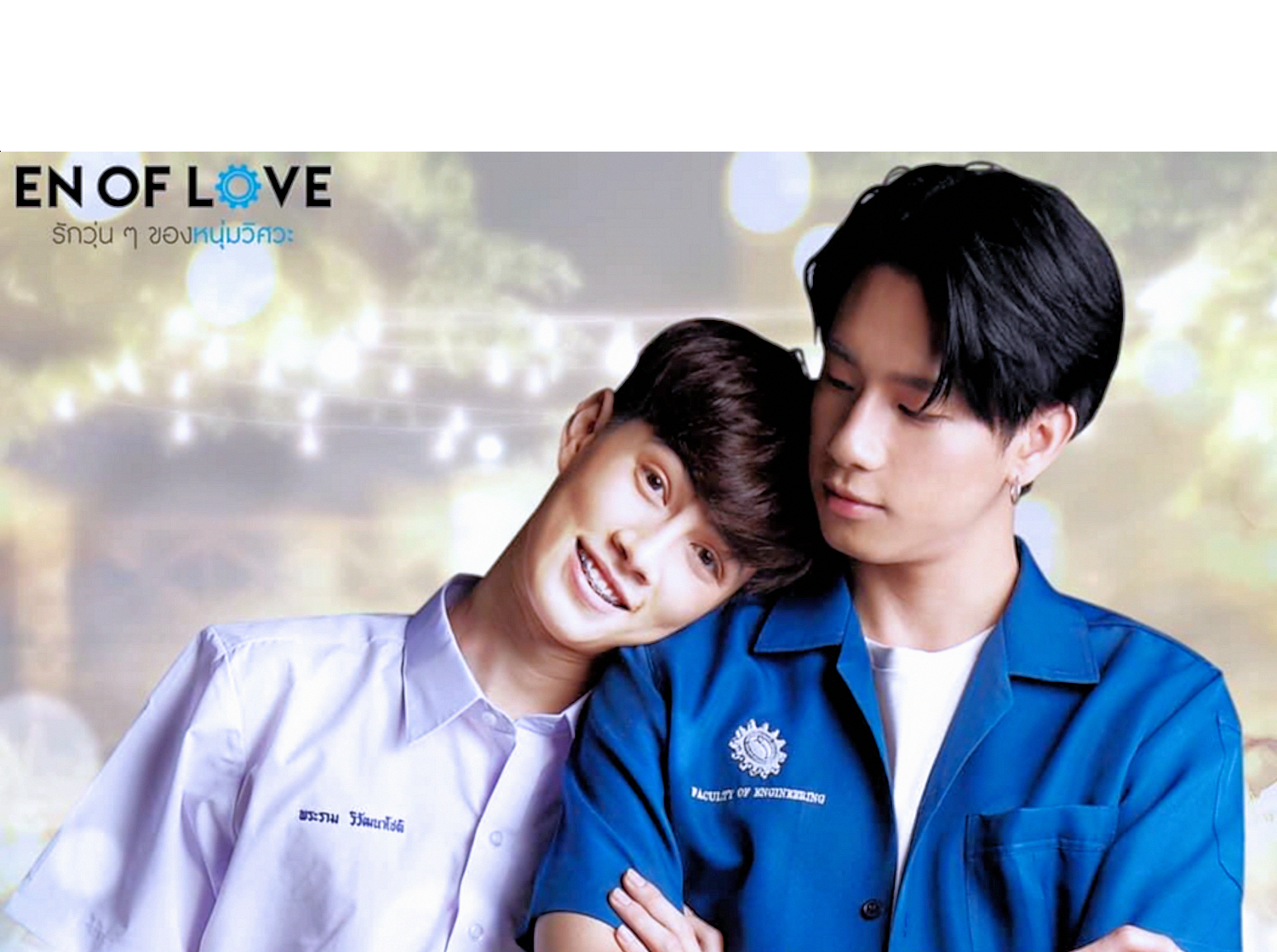 EN of Love – This is Love Story: Episode 2 [Review]

Following the success of the first episode, This Is Love Story aims to continue its domination in the current drought of Thai BL series. With longer airtime and more interaction between the main leads, the second episode is expected to become the cure for viewers’ longing good BL content. Will the strategy work?

Before we dive into the review, here’s a recap of the series. This Is Love Story revolves around Neur’s (portrayed by Prom Ratchapat) endeavors to win the heart of Praram (portrayed by Benz Natthapong). After falling head over heels for Praram’s captivating smile in the first episode, Neur has become more aggressive in expressing his fondness of the younger one. He’s constantly filling up Praram’s social media with flirty messages and shamelessly teasing Praram in public, making the latter feel a bit anxious with his approach.

The story gets more complex with the appearance of Gun, Praram’s older brother, who, despite the popular belief, will oppose the relationship, gives his “blessing” to Neur. Even so, Gun gives a ‘friendly warning’ to the so-called playboy by making it clear that he will interfere with their relationship.

(Authors Note: I love this scene because it’s hilarious. The way Gun was still able to flirt with Bar during his argument with Neur, somehow impressed me.)

Unlike Neur, who is confident with his feelings, Praram needs more time to solve his inner conflicts. Everything happens in the blink of an eye, leaving Praram confused and doubtful of his own feelings. With help from his twin brother, Praram finally embraces his true feelings towards Neur. (He is indeed inexperienced in the field of love. Thank goodness he has Pralak!) Once Praram is certain with what he feels, he becomes bolder with ways to show his interest in Neur – sometimes he even surprises Neur with direct moves – and gradually closes the gap between them.

“Does P’Neur still think that this is your imagination? I’m falling for you, and I’ve never been like this before. We are a brother that isn’t a brother. Just like how Daddy doesn’t mean father. ”

My Thoughts on The Episode

Firstly, I would like to serve up sincere appreciation to Studio Wabi Sabi production team efforts to produce this series amidst the pandemic situation. It can be said that This Is Love Story has become a breath of fresh air for BL watchers who are running out of choices. On the other hand,  this rare opportunity – where there is almost no competition – must be utilized by the production team to strengthen their position as one of the most prominent Thai BL series makers. Therefore, they must guarantee the delivery of high-quality BL series that can fully engage the viewers; even a simple mistake could affect the popularity of this series.

Firstly, I want to highlight some technical issues related to the broadcasting of the series. Although it won’t affect my rating, I think this should become a concern for the production team. The second episode aired 30 minutes later than the schedule, and it came without English subtitles for International fans;they provide the subtitles after its primetime.It provoked criticism from some fans who were unhappy. Yet, I don’t think that those are the main technical issues. The biggest problem is an error in editing that occured in part three of the episode, which greatly caused the logic of the story.

It’s the part where Neur just finished his conversation with Vee. After that scene, we can see that Neur is stressed out because none of his friends seems to understand his frustration. However, viewers were left without further explanation. After approximately three minutes of wondering – there’s no line in between the scene nor any hint of what’s happening – the scene switched to a preview for the next part. Even after watching the following part, we still can’t connect the missing link. Fortunately, the production team realized this mistake and uploaded the newest version of the video a day later. Otherwise, the storyline would feel incomplete and disjointed.

Regardless of those issues, I found that the second episode has shown some notable improvement in several areas, particularly with the performances by the actors. Previously, I’ve said that I felt dissatisfied with Prom’s portrayal of Neur, which was lacking emotion. In the second episode, I noticed some significant improvements. Prom was able to improve his performance as Neur by accentuating the character’s facial expressions, as well as putting more feeling into his acting. There are some scenes where his expressiveness is still lacking, but overall I’m pleased with this advancement in Prom’s efforts. So, kudos to Prom for making Neur’s character more interesting to watch.

The second episode also gives more room for viewers to explore Prom-Benz dynamics in acting like a couple, which I thought has become more convincing. The hand gestures that are shown during their interaction adds more nuance to their budding relationship. I also would like to highlight the ability of the production team to take full advantage of the social media theme – which has become a trait of this series – to display the main leads’ intimacy. In the “New Normal” situation where some strict restrictions were applied to manage the health and safety issues, the production team should find a more creative way to manifest the couple’s intimacy. This Is Love Story has given a good example of that. So, I salute the production team!

Another aspect that I want to highlight is Jinny’s character, which many have assumed will become an obstacle to Neur and Praram’s relationship ( I was one of them!). It turns out, Jinny is only a passerby and maybe a potential shipper of the couple. Rather than ‘ruining’ the relationship, her presence actually gives more emphasis on Praram’s feeling towards Neur. So I’m glad that this series didn’t use the cliche formula of BL series, which is making female characters as a primary villain.

Altogether, I feel content with the storyline that is being offered in the second episode. I’m happy that the writer emphasizing Neur and Praram’s conversations, both in their real lives and their social media. Throughout the series, viewers can see that they always try to communicate with each other in solving their problems. Though sometimes it appears to be more passive-aggressive – bear in mind that they’re still in their youth– and at least they try to talk it out rather than letting their anger take charge.

The second episode of This Is Love Story also leaves us with a powerful message: Communication is the key ingredient to a successful relationship.