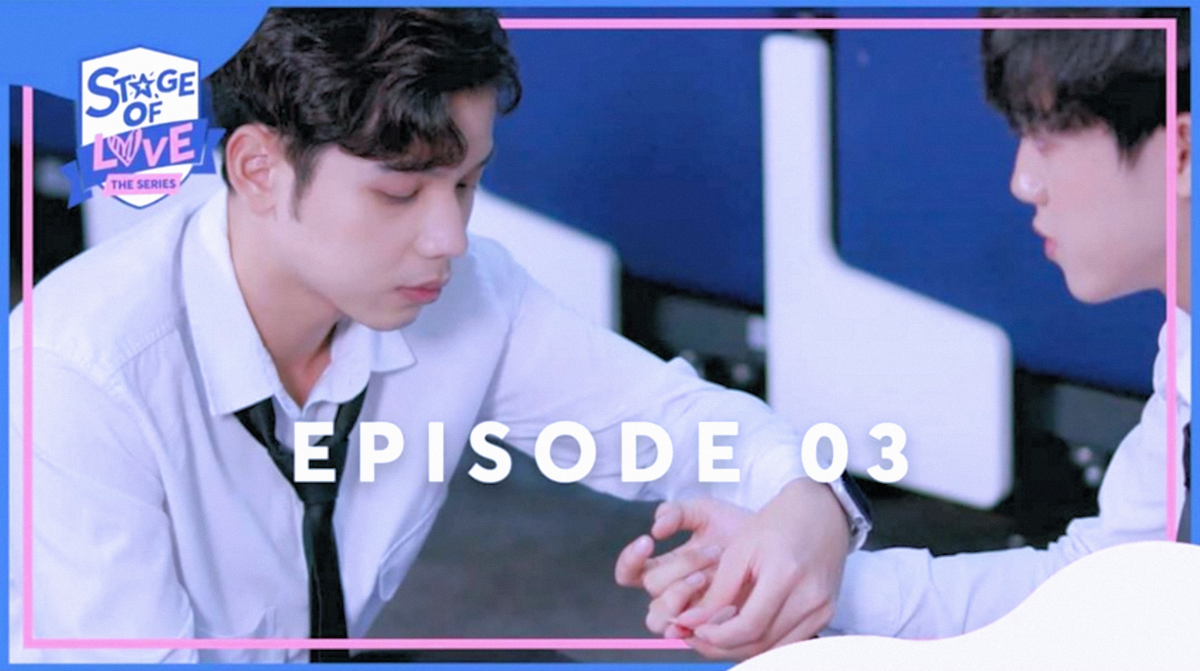 SOL – “Stage of Love the Series” is currently infused with obvious fascination, incoherent fangirling, and jealousy. The story is picking up speed as our main leads are getting a little closer in comfort. We still haven’t devolved into the mystery of the “Accident,” but at least Nguyen’s stubbornness is finally wearing off. Let’s dive in and review Episode 3.

Khanh introduces Nguyen to the new members, but she calls him as a member of the Club. Nguyen, however, corrects her and says that he is a temporary instructor. Truc inquires about that and Khanh replies that Nguyen is here to share his theatre experiences and help improve their performances.

While the others are busy conversing, Nguyen keeps staring at Bao. Bao feels uneasy and approaches him. But obviously, he doesn’t know the truth about Nguyen and Hy and assures Nguyen that he won’t tell anyone about their secret. Nguyen finds his assurances very adorable and decides to tease him. He gets too close for comfort and warns Bao of dire consequences if he ever shares Nguyen’s “Secret.” That’s the exact moment when our resident fangirl Linh sees them together.

Linh’s mind goes into overdrive, and she concocts an entire fanfic story dedicated to Nguyen and Bao’s love story. I’m yet to find a BL drama where we don’t have a busy body “Fujoshi” creating havoc in our main couple’s lives. While she is busy writing, Hy brings her dinner. She doesn’t want to stop writing, so she calls Tien and asks her to get the tiffin box from her brother. Tien is taking the tiffin box from Hy, and they are just fooling around when Khanh walks out of the dorm. Hy fails to notice her while she misinterprets the situation.
Nguyen is listening to music when Khanh angrily walks into the audition hall. Truc can see that she is upset and tries to console her. But Khanh grows even angrier and accidentally knocks over a vase. Bao rushes in and offers to help pick up the pieces. Truc thanks him and rushes Khanh out of there to help calm her down.

Bao is picking up his vase pieces when he accidentally cuts his finger. Huan comes to the hall and seeing Bao’s finger bleeding, and rushes out to get medical aid. Truc notices Bao’s wound and starts worrying. Nguyen walks in, sees them, and he gives Truc an evil stare; she understands the situation and leaves them alone. Nguyen checks his wound and bandages him. But obviously, he can’t help irritating Bao, so he rebukes him. Bao tells him to stop talking like an older adult, to which Nguyen explains that he was born in the ’90s and Bao in the ’00s. According to Nguyen, there is a millennium between them. Is this guy for real? Bao asks him if he always has medical aid in his bag to which Nguyen yet again teases him.

Bao eavesdrops on their conversation, and Nguyen catches him in the act. Bao yet again assures him that he won’t talk to anyone about Nguyen’s secret or his apparent “Accident.” Nguyen teases him again, and Bao tries to appease him by pinky swearing. Nguyen scolds him about being a kid but ultimately hooks his finger with Bao.

Bao is talking with Truc and another club member about the plastic props they use for the drama. Huan is secretly clicking pictures of Bao when Tien catches him. She scrolls through his clicks and inquires as to why he joined the Drama Club instead of the Photography Club. She announces that she has figured out his reason, and Huan is instantly alarmed. However, she accuses Truc of using her old tactics to lure new members to the Drama Club, and Huan breathes a sigh of relief.

Hy finally catches up with Khanh, and she accuses him of cheating on her. She walks off again, and Hy finally figures out that she’s jealous. Nguyen finds him jumping in joy and doesn’t understand why he would be so happy about his girlfriend being jealous. Really, why is Nguyen so clueless? The episode finally ends with Nguyen suffering from nightmares again.

I’m looking forward to the reveal behind the “Accident.”

Linh’s meddling is going to have consequences. I wonder how much her fanfic will affect Nguyen and Bao’s relationship. Will it bring them closer or make them enemies. You can obviously see that Nguyen is intrigued by Bao. When he gets hurt, Nguyen rushes to his help. He also enjoys teasing Bao and getting too much into Bao’s personal space.

I’m looking forward to watching these dynamics because Nguyen has been portrayed as a cold-hearted character. To watch him ultimately fall in love with the adorable Bao would be interesting.

Another angle to this love story is Huan. Until now, we have only seen him as Bao’s friend. But after watching today’s episode, it’s clear that he also has feelings for Bao. The way he rushed to get a bandaid or how disappointed he is when he walks back to see Bao’s finger already bandaged by Nguyen, betray his true feelings to the audience. Also, the way he becomes alarmed when Tien catches him clicking Bao’s pictures makes it quite clear that the only reason he joined the Drama Club was to follow Bao wherever he goes. What will the result of this love triangle?

Equally interesting was watching Khanh losing her temper. Khanh is such a level-headed character, so watching her get jealous was enjoyable. She has such tight control over her emotions that her true feelings are revealed only when she is angry. I can understand why Hy was jumping like a loon in the middle of the playground. I’m hoping the misunderstanding clears up, and they get back together. I’m guessing that Khanh, along with Bao, will play in bringing back Nguyen to his first love – Theatre.

The next episode’s preview is quite interesting. Bao goes fishing for the details related to Nguyen’s “Accident.” He has a sudden mind change and invites Nguyen for dinner. Does that mean they will be getting closer? Keep watching this space for further updates on this sweet romcom.