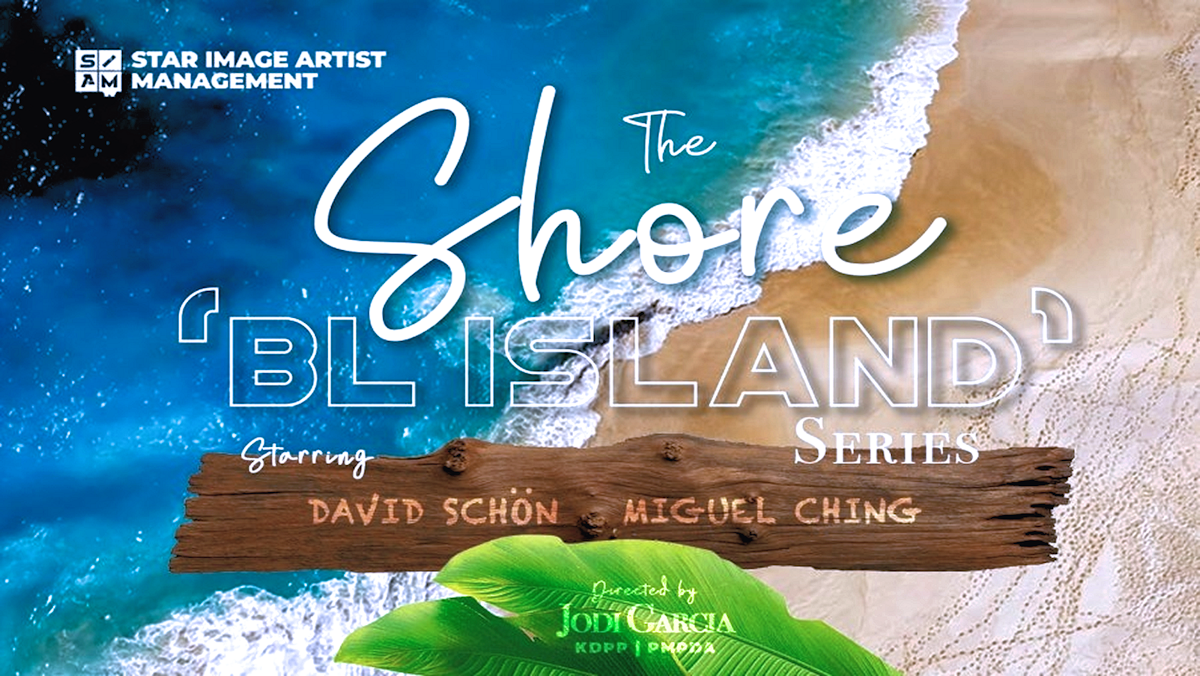 Marketed as “The First Island BL Romance,” The Shore BL Series has an interesting premise. Coincidentally the show began its run when I was reading the recently available Gay Romance “Just A Bit Wrecked” by my favorite author Alessandra Hazard. Both the novel and the show share the same intriguing concept of “strangers stranded on an uninhabited island.” Although the book has a serious “Enemies to Lover’s Trope,” I was surprised by the BL show’s friendly approach. Even though I kept comparing the drama with instances from the novel, the show managed to surprise me with its luscious Cinematography and talented cast.

“The Shore BL Series” is being produced by Star Image Artist Management, who also helmed the popular on-air show “Amore BL Series.” Under Jodi Garcia’s adept direction, the ongoing season focuses on David’s story (John David Schon) and Simon (Miguel Ching), who, unknown to each other at first, get stranded on an island and grow closer as they share invaluable life experiences while trying to survive. Vince (Kyle Verches) plays the third main role as David’s best friend, who might be a potential love interest in the future. Without further delay, let’s reminisce the interesting scenes in the pilot episodes.

As David is suddenly faced with life-altering truths, he decides to escape from the reality threatening his sanity. As he takes refuge at a faraway and remote campsite, David is assaulted with painful memories. Absolutely drunk, David hires a boat and rows into the ocean to find some peace of mind. However, unfortunately, a sudden storm hits the waters, and David is drawn to the shores of an uninhabited island. Unable to adjust to the new situation, David goes through various stages of anger and dejection until he meets Simon, who has been stranded on the same island. The show focuses on their story as our main leads learn to make the best of the situation while honing their survival instincts as they both invariably fall in love.

My Thoughts About the Pilot Episode

The show builds upon the drama right from the start, and that’s what sealed the deal for me. Add to the fact that David (John David Schon) has such a strong scene presence that you are invariably pulled through his emotions. David is in the middle of a maelstrom where he has inevitably stumbled on the truth of his adoption. Although he has loving parents, he can’t reconcile with their expectations and the course of his life. After a brief interlude, he describes his decades-long friendship with Vince, and you can feel connected with their camaraderie. But that’s where the show draws a blank, and we are left confused about David’s current precarious condition.

He gets rip-roaring drunk and stumbles off to the beach. He then barters with some fishermen for their boat and rows into the middle of the ocean to find some solitude. Unfortunately, a thunderstorm rears up and hits the shore, and he gets carried away to an unknown island. This is where the storyline technically switches lanes. David wakes up to find himself stranded, and the boat is nowhere to be seen. Although he was oddly depressed at the campsite, being stranded on an abandoned Island kick starts his survival instincts. He goes through various stages- denial, dejection, fear, and acceptance. Again, John’s depiction of the character will leave you spellbound as he brings to life the utter hopelessness of the situation his character David is stuck in. I was surprised because for a newcomer, his portrayal certainly hits the spot.

Fortunately for David, the Campsite Manager seeks daily reports about the tourists, and the workers notice that he is missing. As David left his belongings in his room, the manager can connect with Vince. I find this second angle mildly interesting. Vince promptly arrives at the Campsite to assist in a rescue operation. Vince shares David’s erstwhile fond memories of their childhood. It is clear that they were close, and Vince feels guilty and worried about David’s safety. I’m wondering why he would break his best friend’s heart when they are so close to each other. Vince’s character was hugely marketed as the third angle in this love story. So I was left surprised by this sudden diversion where Vince is supposedly having an affair with David’s girlfriend.

The most interesting part follows up when David loses all hope and decides to commit suicide. His mental health is already in a turbulent state because of recent events. Add to that, suddenly being stranded on the island drives him to make an attempt on his own life. Just as he is about to drown himself, our other main lead Simon (Miguel Ching), makes an appearance, and you breathe a sigh of relief. However, I did wonder where he was all this time while David was screaming and shouting at the top of his lungs. The only explanation is that Simon might have been wandering on the island and arrived just in time to save David. Simon, as a character, is very intriguing. Compared to David, who is in emotional turmoil, trying hard to return to the Campsite, Simon has a very calm demeanor. It will surprise you as he nonchalantly accepts being stranded on the island and also tries to reassure David. Simon seems to have been stranded on the island for quite some time, and I’m guessing he has adapted his mindset to that fact.

As he waits for David to calm down, you can appreciate his patient disposition. At the moment, Simon seems to be the only person who can help David. I’m already enjoying their odd dynamics and looking forward to upcoming episodes. Add to the fact that the cinematography is much better than “Amore BL Series,” I’m hooked on this series. It will be interesting to watch how the storyline portrays our main lead’s journey as they battle together to survive and end up falling in love. Will David be able to overcome his past insecurities and open his heart to Simon? Will Simon, with his caring nature, be a salve to David’s wounds? Will Vince accept his friend’s new sexuality when he finds them, and how will he seek redemption for his mistakes?

Keep watching this space as we will be back with a Series Review for this show after the finale!