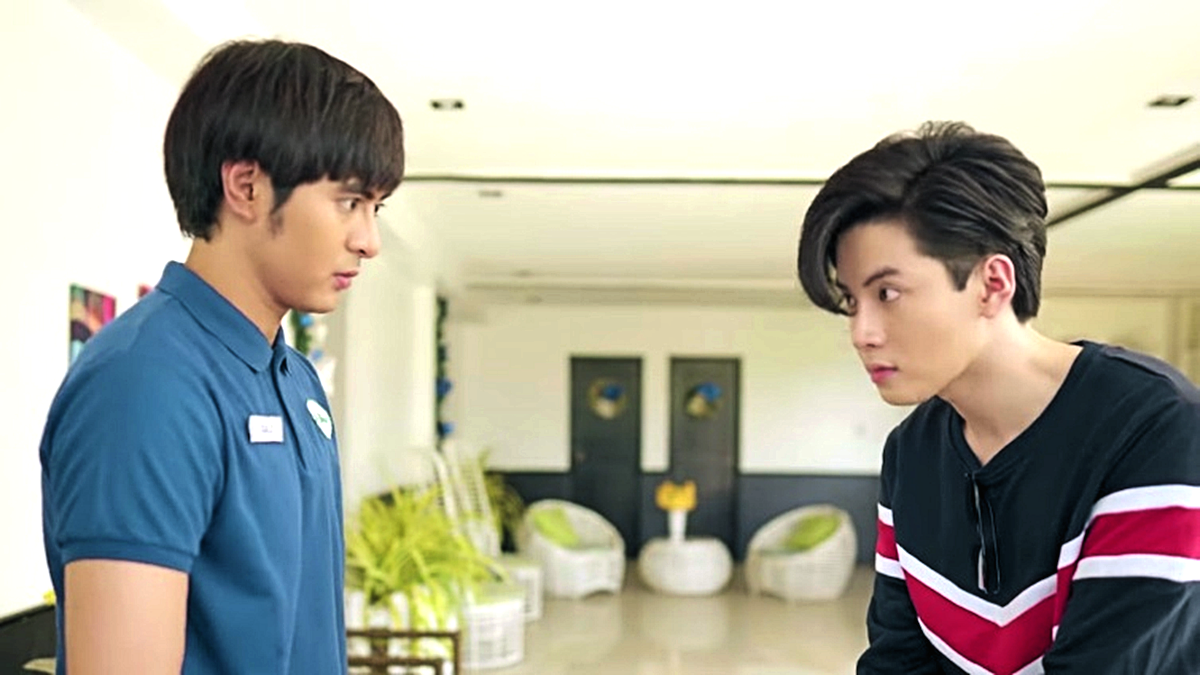 The moments of happiness we enjoy take us by surprise. It is not that we seize them, but that they seize us

Remember that one “Moment” which changed your entire life! The premise of this show is similar to another popular Thai BL mini-series, “The Moment.” If you have read my reviews, it would be clear that I’m a huge fan of the pairing of Pon Thanapon with Bank Thanathip. The hesitancy and subsequent acceptance of their character’s new-found feelings were delivered with such brutal honesty that it leaves you spellbound.
I wasn’t expecting much from “Meet Me Outside” when the show began its round of promotions. I was heavily biased towards my favorite couple and wasn’t sure that their Pinoy counterparts Genesis Redido and Kaloy Tingcungco, would recreate the magic. Helmed by Director JP Habac and Screenwriter Juan Miguel Severo (the duo who gave us the fabulous “Gaya Sa Pelikula”), this mini-series surpassed my expectations and has set new goals for the evolving Pinoy BL Universe!

Kaloy Tingcungco plays the role of James Alexander Chu. He is a famous Influencer. In an attempt to get over his recent breakup, he seeks refuge at a faraway resort as a part of the resort’s promotional activities.

Genesis Redido plays the role of Dale, the hotel concierge. He follows James on his social media accounts and has a crush on him.

My Thoughts About This Mini-Series

James and Dale are truly magical together, and the attraction is instantaneous. It could be when Dale arrives at work and is pleasantly surprised to meet James. The naked admiration and honesty in his eyes spell his feelings, and you feel an instant kinship with Dale. His adoration is understandable because Kaloy’s James is simply beautiful. I watched Kaloy in “Boys Lockdown,” and he’s even better here “Meet Me Outside,” his alluring presence captures your attention. You’ll nod your head and agree with Dale’s words as he tries to console a heartbroken James – “It’s his Loss.” However, my favorite “moment” strikes towards the end of the episode. While promoting the resort, James replies to his followers’ questions. It’s apparent that he is famous, and his followers seem to know about his recent breakup. So when he hesitantly accepts that he felt butterflies earlier in the day, you know who he is talking about. Swoon-worthy countenance indeed, because Dale is on the other end watching the same Live.

Because I need some Christmas Delights

The show takes an interesting turn here. James is looking for some quiet time; however, humans are social beings – he creates a new account on the Blued messaging app. Interestingly enough, while browsing through the profiles, the one that catches his attention is “Meet Me Outside.” That’s Dale’s profile, and he is being anonymous.

Random conversations resume, and this is where you are stuck with brutal reality. Two strangers meet on a messaging app and don’t want to reveal their identities, yet they try hard to find a middle ground. James is being daring, and Dale questions his courage. I was surprised by James’s reply, though – “I know what I’m doing.” He is an adult, and he will bear the risks. I’m not sure what he is seeking here, companionship, sex, or something more. But they strike a deal, and Dale finally agrees to meet James. However, Dale doesn’t like taking unnecessary risks, so he purposely wears a hoodie to hide his identity to make sure the coast is clear. Imagine his surprise when the stranger from the app turns out to be his crush!

Dale backs off from meeting with James. As a disappointed James returns from shopping at the grocery store, Dale meets him outside. They have a cute conversation where both of them try to needle each other. Dale can’t reveal his identity, and James seems sad about being ghosted by a stranger. Despite that, I must say Dale is too good for James’s ego. He never fails any opportunity to make James feel special. A short bike ride and you feel their chemistry. James is feeling lonely, and Dale’s gestures make him happy. Genesis and Kaloy have such striking chemistry that you can’t help but fall in love with their characters’ sudden attachment. All of their moments are significant, even the ones where they are trying to fix each other’s hair. Dale enjoys getting James’s attention and is practically screaming with joy. That’s when he decides to take a chance and reveals his online identity to James. My heart broke watching the ensuing conflict, though. For whatever reason, James feels betrayed or maybe even disappointed by Dale’s actions. The happiness that they felt moments ago vanishes in an instant.

I appreciate Kaloy’s depiction of James. We know James is lonely, got ghosted, and then feels disappointed by Dale’s actions. His ex calls him in the midst of all this, and James brushes him off with conviction. He doesn’t fall into the old trap just because he wants company. I was pleased by his forthrightness. Many people get back with their toxic ex-partners simply because they can’t handle being alone.

On the other hand, Genesis leaves the audience pleased with his honesty. He made a mistake, and although he tries to make amends, James doesn’t respond. However, there is nothing more realistic than watching a person admit their fears and prejudices in front of their crush. James and Dale belong to two different worlds and have opposite lifestyles. Dale’s insecurities make sense, and I’m glad that he admits them. On the other hand, James is graceful enough to accept Dale’s honest apology, and I loved the surprising tandem that followed. James invites Dale to his room for a talk, and Dale assumes an indirect invitation to have sex.

Will My Christmas Wish Come True?

The longest episode in this series also just happens to be the most interesting. When Dale starts to strip, James is somewhat shocked. This episode was full of meaningful conversations that I enjoyed watching with their realistic depictions. Apparently, Dale assumes that James was expecting sex because most customers are prone to those fanciful bellboy fantasies. And Dale is used to most everyone seeing him as a source for sex and the attending objectification. On the other hand, James only wants someone with which to talk.

The conversation then veers to James’s ongoing conflict with his ex-boyfriend. I have often wondered how people get involved in an open relationship, and this show manages to shine a light on the subject. Even though the “open” bit is supposedly “only” sex, relationships are complicated enough. Bringing a third person in the midst, even for sexual gratification, will surely have detrimental effects. Dale is very observant because James hadn’t realized that up to this point, his ex-boyfriend didn’t cherish him. The way Dale looks at James is a clear testament of potential feelings, and I nearly melted into a puddle when he openly admits this.

So when James pleads with Dale to spend the night together, he accepts. The next scene is a masterstroke, and I’m in love with Juan Miguel Severo’s vivid imagination. When Dale asks what James wants for Christmas, James replies with an answer that will make the audience swoon. He isn’t seeking sex but simply wants the feeling of being held by someone. His ex-boyfriend surely did a number on Jame’s self-esteem, and he wants to feel treasured. Dale is the right candidate for this job because the way he wraps himself tight around James is heartfelt. Genesis and Kaloy lit the screen with their chemistry, which swiftly changes from sensual to sweet!

I Want to Take You Home

This episode was another fan favorite. Of course, it’s the finale, and they need to wrap up the story. I kept wondering how this mini-series would end. In “The Moment,” even though the main leads confess, they go their separate ways because they have to sort out their work schedules, with promises of meeting in the future. On the other hand, Meet Me Outside steps out of the boundary. As our adorable couple discovers intimacy and realizes the extent of their new-found feelings, the audiences are left with a foreboding sense of dread. Time is ticking, and both of them are trying hard to hold onto each other. Will they be able to walk away from each other? How will this relationship develop? The Director and the Screenwriter managed to surpass my expectations with the befitting toast to James’s and Dale’s new relationship status.

My only complaint with this show is that this should have been an extended series with a 30-minute timeline per episode. I’m hoping that we get a sequel because this drama reminds you of a slow summer breeze on a cold winter morning. It slowly sneaks up on to you and leaves you feeling warm and fuzzy.