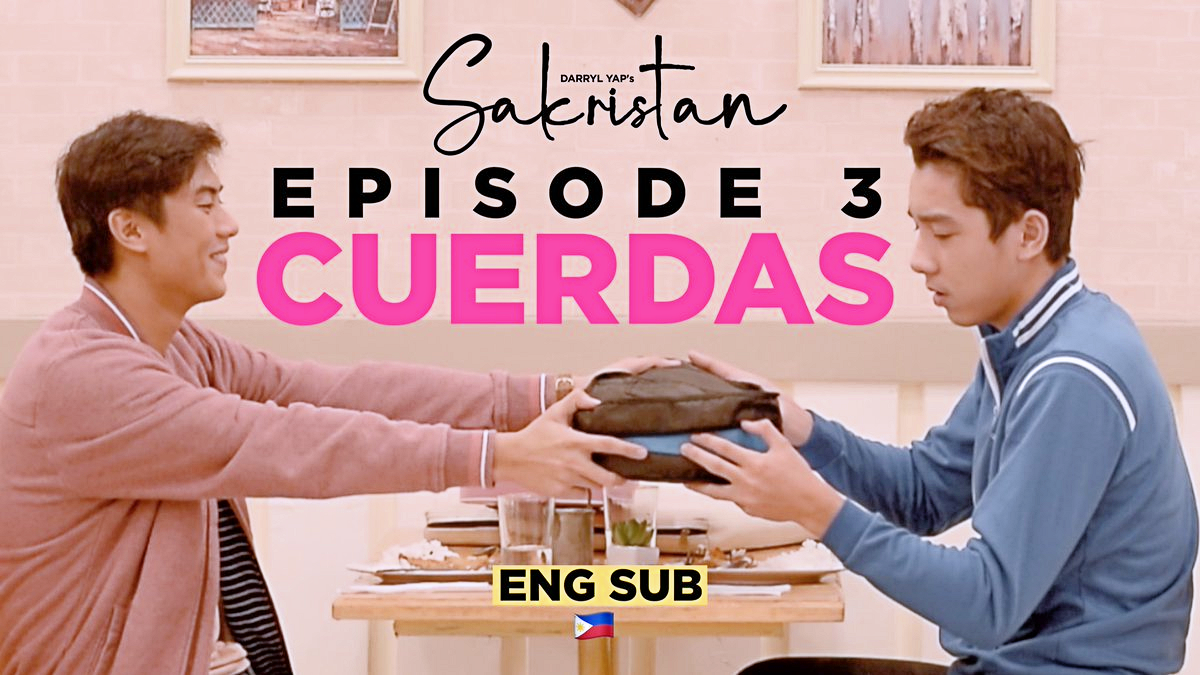 Sakristan is the love story of two men from different walks of life. I know that sounds familiar. That it sounds like the plot for hundreds of Boys Love series but this one is different. By throwing convention out the window and spending twenty minutes an episode just doing whatever the show wants, it’s become an indie darling. In Episode 1, it began at the end of a scene then going back in time to bring you to that moment. Whether it’s illogically cuddling in a locked office on a summer day, so one of them doesn’t die of freezing, or a singing and dancing contest to Lady Gaga reworked songs promoting breastfeeding, one thing is clear this show will do what it wants.

In Episode 3, it’s still on this line of reasoning as it finally answers the question I have had since day one. “What exactly did happen when Christian quit the church?” Read on and find out in “A Romantic Sakristan.”

In my Episode 2 review, I mentioned not knowing the characters’ names because you literally have no idea who anyone is outside of the main cast of characters. As if answering my prayers, one of the first things the episode does is showcase a written out name for each character who is integral to the story. (thank you sincerely, I needed this). It’s confusing trying to determine who everyone is as they all talk over each other and are rarely in the same scene for too long.

Before this, the episode begins with a time-shifting scene showing our lovely mains Christian and Zach studying day after day. Days passing by are indicated by clothes changing, and their temperament towards each other is also changing as they become more friendly with one another. Zach takes his test that they were studying for at the end of the last episode and passes it. Here is one of those not being consistent with finer details moments that confuses me. In Episode 2, Jasse said they are in university, but the words on Zach’s test say “High School,” which confuses me as to which they are in so I can nail down their ages. Why is this important? Because in a show that does a good job of showing and telling, the details make up the whole of the story and if something like this is wrong. It changes how I feel about how characters react to their actions.

He passes and goes to find Christian and interrupts his music class to show him the results, and the two of them hug in front of the class, which is adorably cute. The scene is well-acted and set up with an amazing, well-lit set by some very good lighting. What starts as adorably cute deepens as Christian visibly lets go of his walls and hugs Zach tight as the pair is spun by amazing camera work. It’s mesmerizing how much better this episode is shot than the first two. Everything is neater, the image sharper and you can tell they got better equipment between the first two and now.

Next, we have Christian sitting outside in his boxers and his t-shirt, knee bumping with nervousness as he waits for something. Before we can find out what that is, the episode cuts to the pair having dinner together. Why did we see that? I don’t know, but as the pair eat, Zach has a question he wants to ask Christian but is beating around the bush. Over a silly innuendo inspired moment, the two confess to liking each other as more than friends. A back and forth, tongue in cheek dialogue begins between them ending with they’ll be “starting slow.”

And now, we come to the moment when the episode shines as it introduces you to the rest of the cast that is important. Both Christian and Zach go to their friends and relatives for advice on being in a relationship. In a bold style of filmmaking, we see multiple characters in different frames relaying their advice based on who the main characters are. These ‘interviews’ show the relationship of the interviewee to the show’s main characters. So now we know who is who of this BL in a funny and well done “Show and Tell.” It’s pretty illustrative of how much of the friend’s advice is pretty much the same thing said differently. Despite it being well shot, a lot of what they say is pretty random things that are tangent to the plot, and that doesn’t give much in the way of showing who they are.

Then Christian goes to tell his oldest friend Wolf who is a fellow Acolyte. Wolf already knew about the supposed illicit behavior and assumes the pair have already had sex. His hateful words and insults have no malice in them, though. I don’t know if it’s intentional or not, but it all comes off as a bit hollow to me. The actor puts no venom in his voice, doesn’t raise it too much, and by the end of it looks exasperated with Christian being there at all. On the other hand, if that wasn’t intentional, then the actor playing Wolf isn’t a very good actor. We’ll see eventually, but the “?” mark next to his description, afterward, is more than a little ironic.

Christian showers off those hateful words, and over another dramatic song, and we see a montage of all the Christian / Zach moments leading up to him tossing and turning in bed. The symbolism of those flashbacks being his conflicted feelings on dating a man. Now comes a real leap of optimism, Christian tossing and turning in bed happens over a few days… What? It’s happening in seconds, so yes, I know the director is, I’m assuming, showing Christian in the same clothes on the bed. How do I know this? Because when he contacts Zach, Zach wants to know why Christian has been ignoring his calls and texts for days. I had to rewind and watch the montage scene again to notice the subtle changes in lighting of the window behind his bed to make sense of that. It’s a very confusing directorial decision, but we do find ourselves back to that other random moment of Christian, sitting in his boxers and shirt waiting.

The decision to showcase these moments this way could be because of time constraints or bad editing, who knows. But Zach arrives on his bike, shirtless, at 3 in the morning because Christian asked him to all the same. Here the script is a bit dodgy as Zach is justifiably confused and scared, and Christian is talking like they are breaking up. As the pair hug, I find myself a little bothered by the leaps of faith I have to make for this episode to be good. Despite Christian’s confusing words, he says he loves Zach, and the pair hug and a still very confused Zach relaxes into the hug and says, “Thank You, Lord.”

Concluding the episode where we started the first one with Christian sitting in front of the church, he just quit. Zach rides up, and we see a cliff notes version of the original scene with them becoming boyfriends.

This episode is by far the first real one of Sakristan in my eyes. It feels like a reboot from the way it’s filmed to the way it’s written. Gone are the shock value songs about breastfeeding. It’s not trying to shock us or arouse us but simply be itself. It would be nicer if it were better written. The romantic moments were cute, and I enjoyed them; however, scenes like the friends’ montage advice compilation or Wolf’s word vomit of gay insults fell flat and didn’t create anything to give the episode substance. It felt like Wolf was reading off a grocery list, and the actor had no idea where he should be looking.

I still have no idea what exactly Christian was saying when Zach greeted him at 3 AM. Beautifully shot, cute and romantic oh yeah, but did it make sense? Not really. At this point, you can take Sakristan for what it is and draw whatever conclusion you want from the poorly thought out scenes. Honestly, that is exactly what I’m doing, which is disheartening because this episode is the best of the bunch released by a mile so far, and if it had been better edited and written, I would have loved it.