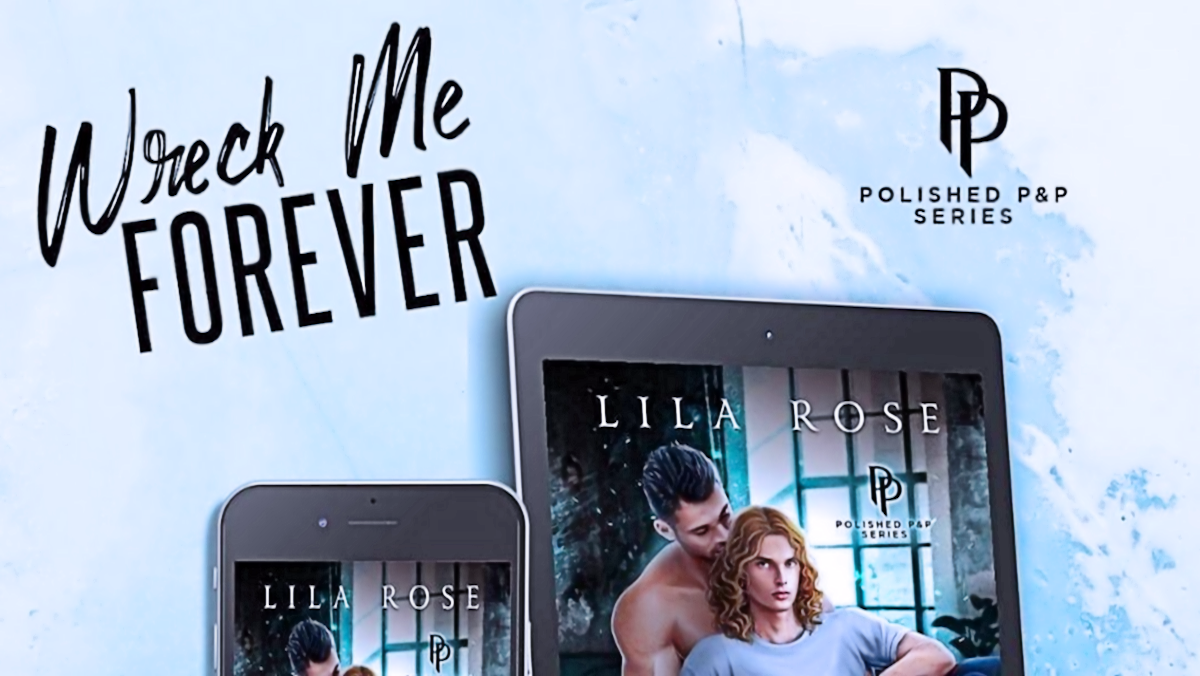 Lila Rose is mostly popular for her Straight Romances, which involve alpha heroes bursting with testosterone. They are either MC sojourns or firefighters. Although she has written gay romances like Hear Me Out (Hawks MC Caroline Springs Charter #5), Coming Out (Hawks Motorcycle Club #4.5), I have only read her ménage romance Out of the Blue. It was quite interesting, to say the least. So when I found her new book Wreck Me Forever (Polished P & P, #1), listed on Goodreads, I knew that I had to read it. The gorgeous Cover Design was another reason for following up on this novel.

I’m so glad that I did it because although the premise of a Straight Alpha falling for a Nerdy Gay guy is nothing new, this story shares strong vibes with the ongoing Filipino BL drama “Hello Stranger.” Lila Rose always manages to deliver us right into the center of a new universe with varied characters that slowly grow on us and become a part of our journey. Lucas and Wade are two such characters; you can’t help but fall in love with the grumpy Wade as well as the adorable Lucas. Without further ado, let’s review this book.

Blurb
Lucas Storey’s life is all about college, studying, and finishing his medical degree. That’s until he moves in with his older brother and meets his motorcycle club friends. Only new people make Lucas nervous, almost to the extent of peeing himself, but he soon realizes they’re great people and will accept him as he is. Now, if only he can stop thinking of a certain grumpy biker, things will be good.

Never before has Wade “Wreck” Williams noticed the same sex, or at least not until Lucas crashes into his life. And notice Lucas he does. But that’s not all. He wants to get to know the man, and he kind of likes looking at Lucas too. None of it makes sense, and Wreck will fight it for that reason alone.

When Lucas thinks he can go out with someone who’s not Wreck—and jealously rears its ugly head to a point Wreck just has to step in—it’s clear that he may just be wrecked forever.

The story is told alternately from both Lucas’s and Wade’s POV. We are introduced to Lucas, a nerdy recluse who prefers studying to socializing. He is currently staying with his elder brother, Zion. Zion is a frontline MC member and also runs his own business “Polished Pussy” which is primarily a brothel. His parents are both happy go lucky people, and they have no issues with Zion being involved in such a scandalous business. Lucas, on the other hand, is having reservations about accepting his sexuality before his parents and brother. That’s when he has a chance encounter with Wreck. Wreck is Zion’s business partner and fellow MC member. Their first meeting is interesting because Lucas is instantly captivated by Wreck. In the meanwhile, Zion divulges that he and their parents already know that Lucas is gay.
Lucas feels like a huge weight is lifted off his shoulders. Each of his further interactions with Wreck brings them closer. Wreck, who is obviously straight, behaves a bit strange whenever he is around Lucas. He can’t stand anyone getting close to Lucas and is increasingly worried about Lucas’s safety.

In a moment of weakness, Wreck kisses Lucas but regrets it later. Heartbroken, Lucas decides to move on and starts dating his college friend, Gregory. This news, however, upsets Wreck, and he finally confesses his feelings to Lucas. They start dating briefly, keeping it a secret from Zion. Wreck also figures out that Gregory was actually fake-dating Lucas to break up later. Lucas’s class rival Mitch had forced him to do the deed so that Lucas loses his concentration in studies.
Somehow the news of their dating spreads throughout the Club, and everyone helps to keep it a secret from Zion. But the secret tumbles out when Wreck meets Lucas’s parents. Lucas’s father sees them together and guesses that they are dating. Quite tired of hiding the truth, Wreck finally accepts his relationship with Lucas in front of Zion. Zion isn’t exactly pleased, but their parents smoothen out things. Lucas and Wreck finally move in together and start a new phase of their life.

My Thoughts about This Story

Lila Rose’s novels are mostly centered on growly, grumpy men who finally soften on finding their better halves. Wreck or Wade is quite similar in that respect. He is an introvert, doesn’t socialize with anyone except his MC friends, and isn’t looking for love. His life revolves around the motorcycle club and his business interests. He has always considered himself straight, so his life is turned upside down when he meets Lucas. First thing, he is captivated by Lucas’s unusual beauty and quirks. Despite not understanding his sudden fascination, Wreck is drawn to Lucas. Of course, he fights the attraction because it would mean betraying his best friend Zion’s trust if he dated Lucas. You must understand that MC has certain rules, and the members must always abide by them. Wreck is stuck between accepting his feelings for Lucas and worrying about Zion. But you can only betray yourself for so long. Wreck has always been lonely because his parents made him feel unwanted. That is one of the reasons he is drawn to Lucas, the promise of a family.
Lucas, on the other hand, is a bundle of warmth. He has spent his entire life being sheltered by his overprotective brother. Lucas is unsure about his family’s reaction to the revelation of him being gay. However, they accept him wholeheartedly. I love how both of his parents took it in stride, and Zion promised him that he would forever protect his baby brother. It doesn’t matter if he is straight or gay. Wreck leaves a deep impression on Lucas’s mind, but he is insecure about Wreck’s still being straight. He constantly questions his attraction to a straight guy with a girlfriend. However, fate has mysterious ways of bringing two people together. It works out in their favor, and they grow close as they learn more about each other.
I really loved reading this novel. I just couldn’t put the book down until I got done reading all of it. This book is surely different from the norm, which Lila Rose follows. Lucas and Wreck are both imperfect, but together they are perfect for each other. Their story is inspiring because they both followed their heart and weren’t afraid of society’s homophobic notions. They choose Love, above all!

Read this book because it has the right mixture of sweet family moments, coupled with romance that leaves you smiling throughout. The next book in this series releases on August 4th, 2020.