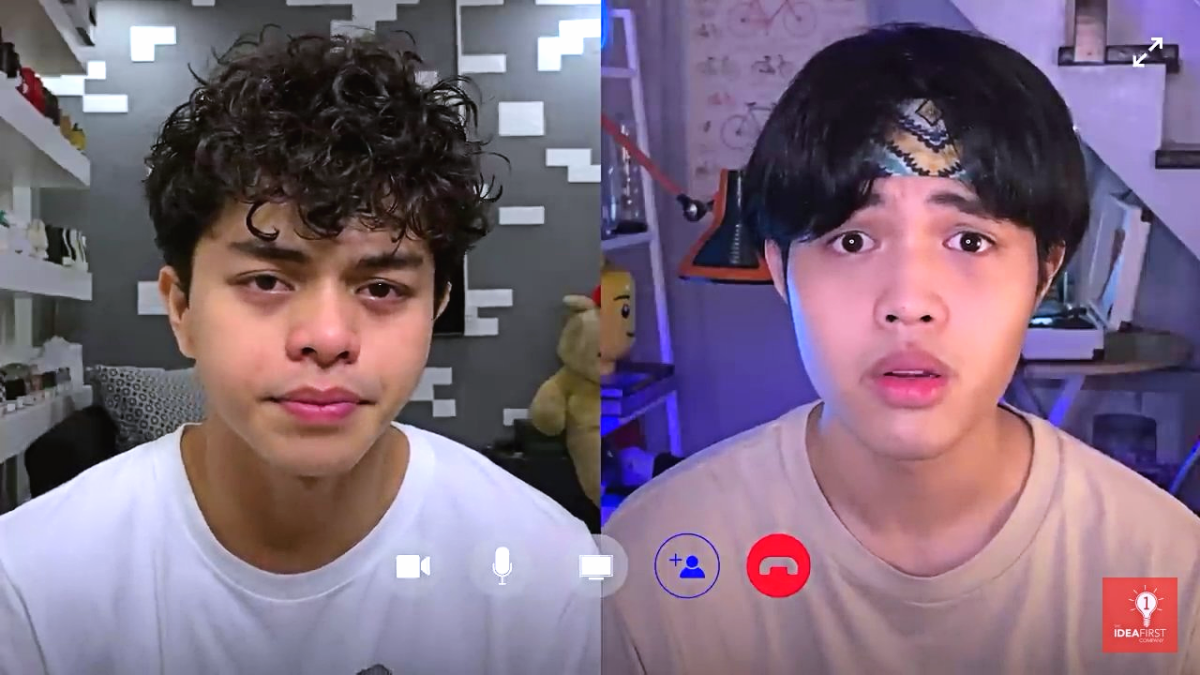 Terrence (Kyle Velino) makes his presence known to Cai (Elijah Canlas) and barges into his game livestream, throwing Cai out of sorts. Terrence then “friends” him and starts to spill some details about Gav (Kokoy De Santos). This disclosure leads to Cai questioning Gav’s intentions creating tension between them.

Terrence is persistent in being chosen as Cai’s online player and asks to be live on camera for his audience to see. Cai asks him what his username is so they can start the game – the username Terrence gives way to “GavreelsOnlyLove.” Cai stares at this briefly to which Terrence says it’s an old username, and it refers to the “Angel of Peace.” Terrence pursues by asking Cai, “You know him, right?” By this time, Cai is in gay-panic mode, aggravated further by Terrence’s insinuations, “You know what I’m talking about.” This verbal barrage causes Cai to end their online conversation before the actual game has even started.

Cai becomes curious as to who Terrence is and what his intentions are, so he checks on Gavreel’s social media posts and photos until Cai goes back and finds Gav’s posts from a year ago with pics including Terrance. His growing curiosity quickly becomes jealousy. Moments later, in a video call with Gav, Cai evidently looks disturbed, but he lacks the courage to tell Gav honestly what is really bothering him. Cai tries to ask Gav, but he just can’t muster what he needs to be direct. Cai then tries to alter his tactics and instead ask Gav if Gav is not telling him something he needs to know. Cai’s ploy here does not work to his advantage.

Terrence pursues “friending” Cai, calls him up on video call, and tells him more about him and Gavreel’s past – and that Terrence is Gav’s former boyfriend. Terrence knows who Cai is to begin with, and he has an idea, but he pretends as if he has no idea who Cai is yet and asks him if he is Gav’s new guy.

Terrence starts by disclosing who he really is: that he is Gavreel’s old flame. And that he is curious to know his former love’s ‘new’ guy. Terrence continues on how he and Gav became an item and that the two of them dated awhile back. He tells Cai how they started and how Gav pursued him – and that Gav likes the thrill of adventure and the challenge of the hunt for guys who are not into him at first and then winning them over. This strategy works because it throws Cai off his game and starts him worrying about Gav’s intentions. Gav, on the other hand, has no idea what is going on and during their next conversation assumes that Cai is just irritable as he has before.

However, Gav is starting to worry as well, so he consults Pearl (Adrianna So) and asks if she knows anything. Pearl then tries to get more information from Cai by calling him and playing a love calculator. As a believer in astrology, she tells Cai his and Gav’s star signs and how the personalities of a Cancer and Scorpio work together well. The Love Calculator gives the pair a high compatibility rating but also cautions that they have to control their mood swings and flared tempers because these could cause trouble in their relationship.

Cai thinks that Gav is not being truthful to him and starts insinuating that Gav is at fault. Pearl tries to figure this out, but Cai wants to keep the information to himself. However, he does ask Pearl if Gav was as intense in the past as he is now. What I love about this conversation is how Pearl handles Cai’s question as to whether she feels betrayed that Gav didn’t tell her who he really was back then. Pearl says that Gav was exploring his sexuality during that time and that she understood that it was difficult to process that amount of emotional confusion without having a person to talk to.

Pearl perhaps already had an inkling about Gav’s sexuality questions as she herself is more comfortable with her sexuality. She is bisexual after all, and this made her more empathetic to Gavreel during that time.

In another video call with Cai, Terrence starts to imply that Gav just uses a sob story about the loss of his grandmother to win guys over. Terrance is just plain gaslighting Cai (a technique of deception and psychological manipulation intended to make the victim dependent on the deceiver in thoughts or feelings) at this point. His intentions are very clear now: to create a wedge between Cai and Gav and cause them to separate or stop talking to each other.

The last scene was hard to watch as Cai gives Gav the cold shoulder and insinuates that Gav is pursuing him only because Cai is hesitant and difficult to catch. He likens Gav’s advances to the desire to play new games when his interests are high, but after he reaches his objectives, his interests drop.

However, it is Cai’s questioning Gavreel about using his grandmother’s demise as a sob story to make guys fall for him that triggers strong emotions in Gav. Because of this, Gav asks Cai if he wants him to stop courting and for them to end their communication. The episode ends with Gav leaving Cai alone, which seems like their first disagreement as an unofficial couple.

The ‘gaslighting’ of Cai by Terrence appears to be Terrence’s plan all along so that he can win Gav back. He plays on Cai’s doubts concerning Gav and his affections, to the point that Cai’s feelings and beliefs become easily manipulated.

Outside the script, the situation between Gav and Cai would not have been so traumatic if Cai had the courage to open up to Gav about his interactions with Terrence. However, since Cai was still troubled with a little doubt about Gav’s sincerity, this would make opening up even more difficult. In any relationship, open communication is always the best way to ensure that both parties keep clear of any misunderstanding and doubt. Open communications require trust, and trust is built over time, and that is what’s missing from the relationship between the two characters Gav and Cai.