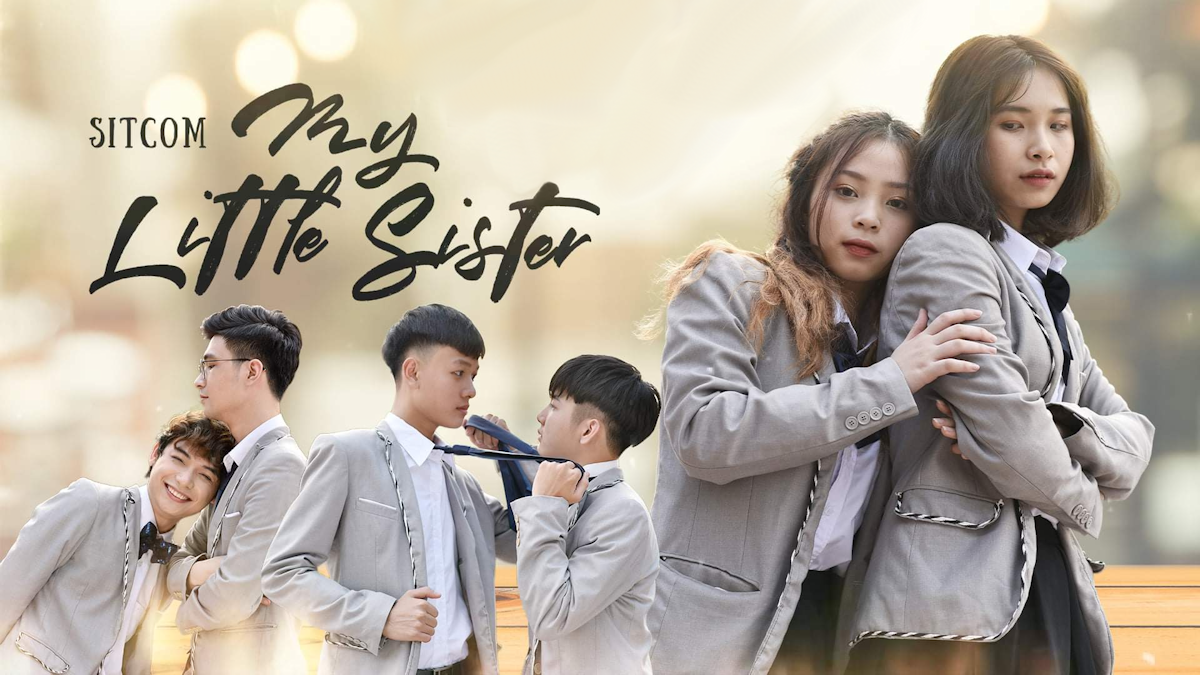 Why are they all so selfish in love? For the sake of their feelings, they make any sacrifices

My Little Sister, a show with both BL & GL storylines, premiered On July 17th, 2020, on CiF TV’s YouTube channel. This show from Vietnam revolves around the stories of youngsters with complicated family relationships and some more drama in the school. The trailer & cover hints and one GL & two BL couples though so far from episode 1 & 2 we only have the introduction to two of the couples and some secondary characters.

Yen (played by Hong Hanh) is forced to move to a new city and into the house of the man who has married her mother. There she meets her new stepsiblings Diep (played by Huyen Diep) and Duc (played by Le Tan). Yen is very bitter about this move and spares no time is expressing her displeasure. Not only is she rude to the stepsiblings, but she also refuses to eat with the family and even returns home drunk after some party.

Diep [she looks so pretty in every frame], on the other hand, is polite to Yen and even accepts her new mother and is very caring towards everyone. Duc only cares for his sister and is not happy with the way Yen treats her.  The next day, on the way to school, while Diep expresses her pleasure for having a sister finally, Yen dismisses her and tries to skip school, but Diep follows her.

Next, we meet Diep’s classmates Tuan (played by Dang Khoa) and Nhat ( played by Khia Ca Khia). Nhat acts grumpy and is scolding Tuan for being late again, even when they leave early most of the time. Tuan is totally clueless about why it happens, and his cuteness at being scolded ultimately softens Nhat’s mood. While they are sharing this moment, they are interrupted by Thanh (played by Nam Anh). Thanh seems to be the kind of character who has eyes on all possible ships and is just on the lookout to confirm his suspicions. His comments make both Nhat & Tuan feel a little awkward, and Tuan especially acts defensively being complimented.

While looking for something in the girls’ room, Duc finds a picture of Yen & another girl, along with a farewell letter and a necklace. He smirks at this discovery and keeps the things as it is for now. Diep once again tries to talk to Yen, but Yen walks out after declaring that she is only waiting to move out after graduation and does not want any nuisance from Diep. Even after this, Diep has a soft spot for Yen, which shows in her actions, which are not completely ignored by Yen.

At school, Diep, Tuan, and Nhat seem to be in some sort of love triangle for now, but the all-knowing Thanh still believes his prediction is going to come true. Yen attends the school, and on the way back to home, she even tells Diep that she doesn’t hate Diep, but doesn’t like her either. Diep, realizing that Yen is not happy, shares her secret spot with her to make Yen feel better. The Episode 2 ends with the girls having a short talk and looking out from the bridge.

The first thing one notices about the show is its low production quality, and most of the actors seemed to be raw in terms of the delivery of their lines, and reactions to other characters. I felt this more for Yen’s mother more than the girls, even if their first scene was not a great draw for the series. It definitely felt better in the second episode for both the couples, but the episodes are too short [both run under 15 minutes] to judge more. Thanh is the only character who looked very confident in his role and is also one of the more interesting characters in the story. He is not loud or forcefully humorous but managed to make me smile in both his scenes. I have not got any idea about the third couple of the show, and hopefully, the next episode is a little longer and takes the story forward. I would like to know Yen’s background story because her unhappiness seems to stem from a past relationship, perhaps.

I am not awestruck by the show, but I am definitely going to follow this one. It can be a cute binge-worthy filler show between other intense, better BL shows. For me, the biggest pull into the show was its opening credit sequence & the background music. I cannot wait for the team to release the OST of the show and even better if they also release an MV with the lead couples because the songs are brilliant. I think I have heard two songs so far, and both the music & voices for each are stuck in my head even two days after watching the episodes.