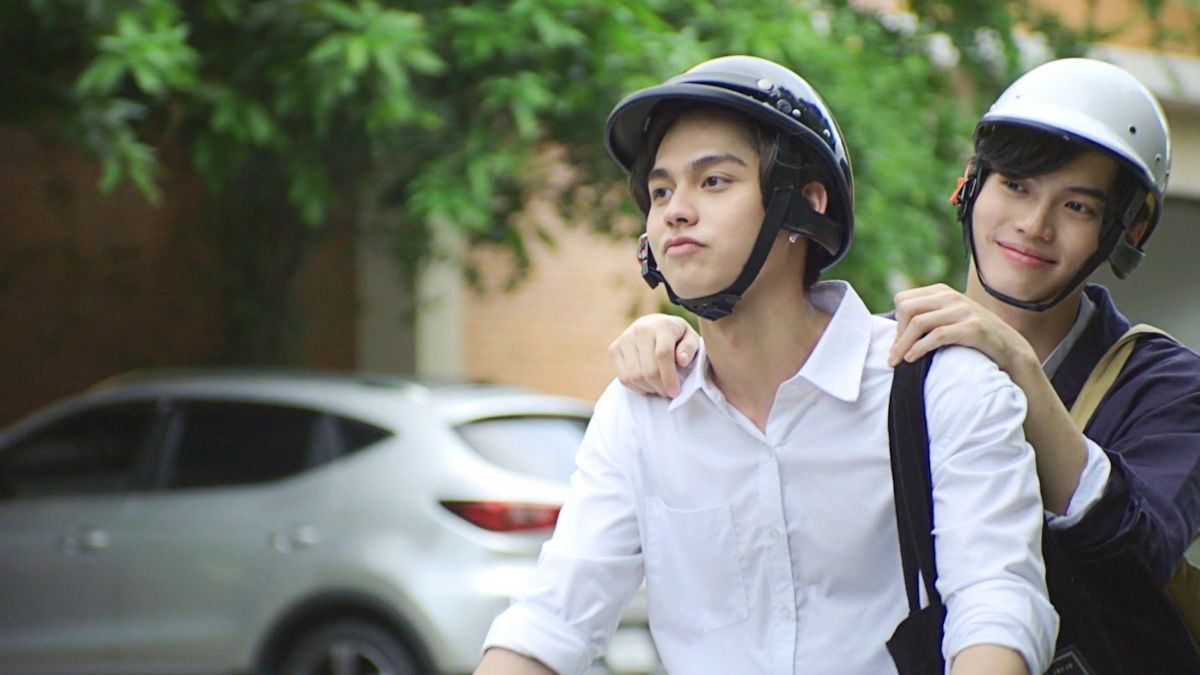 The Boys Are Back in Town

“Still2gether the Series”, the sequel to the GMMTV series “2gether the Series” debuted today. All of the cast was back and this time in some different places in their lives, or in one couples situation the same place. There was talk of it taking place ten years later. But Episode 1 picks up with them a year in the future, still being their silly, overly dramatic selves.

Tine (Win Metawin) and Sarawat (Bright Vachirawit) are now living together, happily for the most part. The two are adorable but have the sort of small annoying moments couples do. It was nice seeing the sense of reality for them. Simple things like how to wash clothes(no one pulls shirts inside out before washing) cause bickering but not much more. The two face new roles in their university lives, which causes a minor conflict, but in the end, it’s about trust.

These two were my least favorite couple in the original series. When we find the pair, they are also living together but not always the happiest. Type is a controlling neat-freak, and Man is a laid back messy person. But opposites attract, and the two do love each other, hilariously. They didn’t have ½ as much story as Tine and Sarawat, which was disappointing, but it’s still early. Maybe things will happen for them later.

Bro’zoned is a word used to describe the pair who gave us hope for a relationship in the finale of 2gether. But here we see them still nothing more than friends. Like Man and Type, there wasn’t much to their story besides Phukong daydreaming of a happier outcome and Mil ditching Phukong with his homework. There is a hint that Phukong is going to do something to change that. So there is hope.

Episode one was a hit with me. The showrunners took all the criticism aimed at the finale episode of 2gether and rose above it. The episode was funny, fluffy, and did a great job of standing on its own two feet. Tine and Sarawat have come a long way from when the original series started. The writing of them feels more lively and less stilted this time around. Watching their domestic not bliss was very organic and well-acted. Small nuances between the pair have given their scenes a much better feeling to me as a viewer. That says a lot as well because I disliked both of them in the original series.

What stuck out for me was the consistency of the script. You see a character situation referenced, something another character did in a scene, and they weren’t in but heard about, and it gives a sense of fluidity to the episode that 2gether never had. Man references that Type and Tine are truly brothers in their mannerisms, and we had just watched a scene of Tine acting the same way. All this, to show you that Man and Sawawat communicate off-screen. Little things like that go along way with the show.

Side characters here are used far better, and I love it. Green being superbly messy was a hilarious moment or when you see P’Fang convince Tine to do the chic dance. Scenes like that make the episode more enjoyable because it feels like you’re peeking into their lives, not watching a show.

The pacing was amazing; everything happened naturally from start to finish. The writing showed care and attention to detail. Sarawat having a brother moment with Phukong, stood out for me as it felt like watching actual brothers from how they talked.

All I hope is that the other cast members have more to do. With three couples and five episodes, there is more than enough room for everyone to have a storyline. Phu and Mil were essentially in the same scene for a bit longer than made sense. You see the other cast doing different things, and I wonder how long they sat at that table. Moments like that made them feel extra to me as opposed to the main cast.

Overall the episode was fantastic, and I enjoyed it far more than the latter half of the original show.