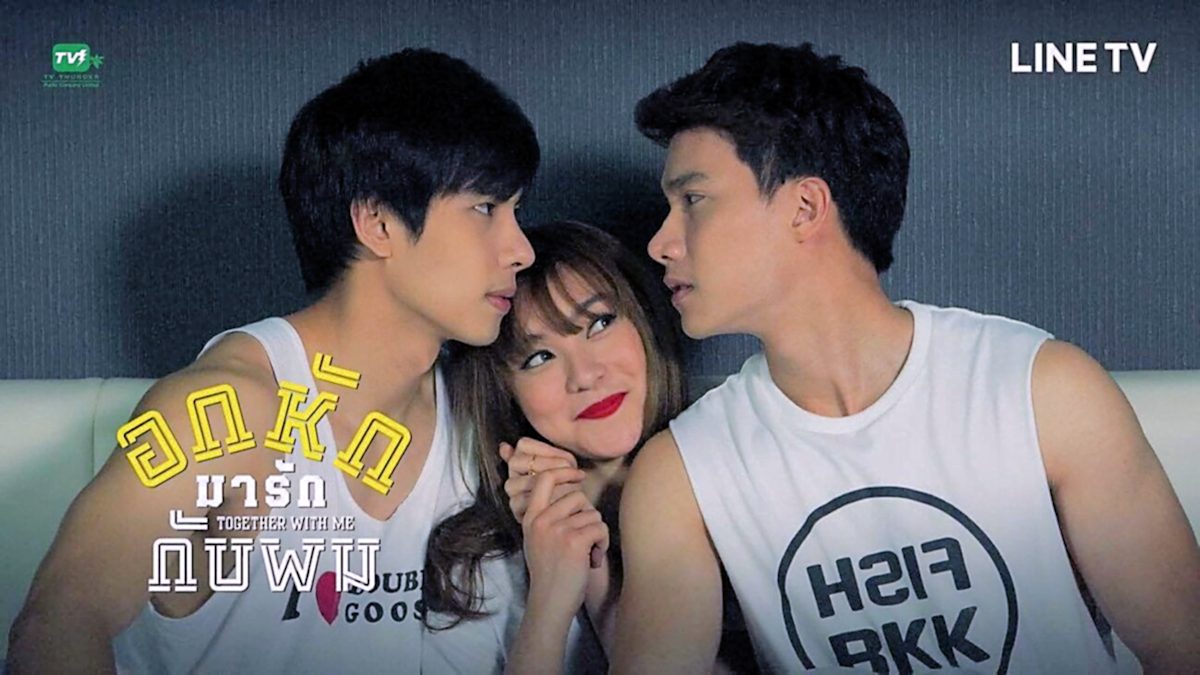 Together with Me (อกหักมารักกับผม) Episode 1 [Review]

In an age where Thai BL was steadily searching for its roots, one delicious couple skyrocketed the genre’s popularity to unprecedented levels. That couple, of course, is Max Nattapol and Tul Pakorn, most popularly known by their common moniker “MaxTul,” and the drama series is “Together with Me.” There is something about watching two gay Adonises fighting for supremacy in bed that leaves you breathless and demanding more. Their sensual chemistry burns the sheets and sets our screens on fire. But what made the show a global phenomenon is the carefully structured storyline including very effective supporting characters.

The motley gang of friends that the main characters Korn (Max Nattapol) and Knock (Tul Pakorn) gathered are equally important. This drama is actually a prequel to “Bad Romance Series” and showcases Korn and Knock’s journey to becoming a couple. The storyline touches on the unfortunate phenomenon of “Gay Panic” as well as the resulting consequences of not accepting aspects of your own sexuality. Quite a bold attempt and very determined! Today Psychomilk is bringing back this classic for our readers, as “Together with Me” premieres on the international platform “Netflix” on September 4th, 2020.

Max Nattapol portrays the character, Korn. He has been best friends with the other lead Knock since childhood. It’s apparent that he has repressed feelings for his friend, which come on strong when they have a drunken night escapade. The drama follows Korn’s journey as he fights for Knock’s love despite their tumultuous relationship.

Tul Pakorn plays the role of Knock. He has always perceived himself as on the straight side of the sexual spectrum but starts questioning this rigidity after he has sex with Korn. Although he protests at first, he gradually begins to reciprocate Knock’s affection and finally accepts his feelings.

Knock and Korn are childhood friends who surprisingly meet at their university’s orientation program, years later. They travel to their hometown of Amphawa where during a night of drunken partying, they end up having sex. Upon waking up the next day, Knock is horrified when he discovers he’s naked and in bed with Korn. With this turn of events, instead of doing any self-examination at all, he immediately blames Korn. After a lot of fighting and argument, both agree to keep this event a secret from Knock’s girlfriend, Plern Pleng. However, fate has other plans for them, as Korn’s best friend Yihwa takes matters into her hands. She decides to unite or “ship” the two of them and expose Plern Pleng’s evil deeds. Together with Me is the love story of Korn and Knock’s as they experience several roadblocks before finally uniting as a couple.

Two hot men, all sweaty and naked in bed is exactly my kind of drama! The premiere episode was surely designed to shock the audiences and set a precedent with MaxTul’s sensual chemistry. The pilot episode raises the bar with its oomph factor, and you can’t help but be drawn to this couple. Who are these two strangers (to us), and why is one of them panicking at the idea of waking up to his handsome partner.

The show transitions between past and present as we are finally introduced to Korn and Knock. Their friendship is loud and adorable, and if you don’t know that Tul is actually older than Max, you will completely believe that they are besties in every sense. They fall back into their easy friendship as new friends Yihwa, Farm, Phubet, and Fai complete the circle. We might have missed something in between because next thing we know, they are all gathered in Yihwa’s getting rip-roaring drunk. Getting drunk either solves their issues or puts them at the forefront of new problems, not that they learn from their mistakes.

Korn and Knock leave for a trip to Amphawa, the destination which becomes the start of their existential crisis. At this point, Korn and Knock are like good old friends reminiscing about old times. But like most ‘straight’ men, drinks and pretty girls are their ruinations. They stagger to a hotel room with two strange girls. At this point, I’m seriously questioning their idiocracy. A “Truth or Dare” challenge ensues, and the girls set up Korn and Knock to kiss. If you notice carefully, Korn’s intentions are quite clear. He is just using the opportunity to kiss his long lost friend. After the girl’s leave, a split-second decision leads them to kiss again. Both are drunk, but again, Knock is consenting. It’s not like Korn is forcing himself or anything, because he checks to see if Knock is uncomfortable with their kiss – he’s not. The scene was drawn out and passionate, and you can clearly see how much Max and Tul are in sync with their characters.

Things, however, get a  little strained in the aftermath of their wakeup call. Obviously, after the drunken stupor clears and Knock realizes their situation, he is horrified. Although both were consenting adults, he places the blame on Korn. I have obvious issues with this turn of events. First, because Korn didn’t force himself on Knock. So what is this guy being high and mighty about, did being a bottom hurt his masculinity? Because this is from where Knock’s issues seem to originate! At this point, we realize that Knock is quite an insecure and indecisive character, as that is even more obvious from his attempt to seek answers online. On the surface, it seems childish and preposterous. However, we’re dealing with an incident where Knock enjoyed a sexual experience with his best friend. Maybe the thought of sex never occurred to him.

Knock guilt-trips Korn into believing that it is all his fault. I felt sorry for Korn because he has a fall out with his best friend and is left at loggerheads on how to resolve this situation. The only redeeming quality that Knock possesses is that he doesn’t take out his anger on Korn’s unsuspecting mother. In the midst of this tornado of emotions, Knock’s possessive girlfriend, Plern Pleng, adds a twist. From her character sketch, it’s obvious that she is cunning and has a certain hold over Knock. Pleng acts sweet, but underneath she is a conniving bitch. The kind of behavior that should have set off warning alarms for Knock, which he inadvisedly brushes off. A direct contrast to Yihwa, who is considerate and trying to resolve her best friend Knock’s unsaid problems! You just know these two female titans are going to have a major showdown in the near future. Pleng mainly because of her pompous attitude and Yihwa because of her sassiness, both are going to either start rowing the ship or destroy Korn and Knock’s romance.

The episode touched on some major issues that are important to Korn and Knock’s budding relationship. It’s obvious from Korn’s guilty conscience that Knock is important to him, and Knock’s feelings are certainly not of the friendly nature. Knock, on the other hand, is not going to make things easy for Korn. I loved the ending scene, where through a series of physical slapstick, Knock is unknowingly holding Korn’s hand and dragging him along while shopping. The way Korn follows him without any question is a clear sign of his affection for Knock. This love triangle is going to be messy, forbidden, and intriguing. The dynamics between the main characters will address their future course of action.

Will Korn spend all his life apologizing, or will the poor guy get a breather? Will Knock realize that Korn would make a much better match for him that the manipulative and arrogant Plern Pleng? Will Yihwa succeed in playing “shipper?”

While we are reviewing this show, Psychomilk will also bring you exclusives from the shooting spot of MaxTul’s anticipated upcoming thriller sitcom “Manner of Death The Series.” Here are some “Never Seen Before” pictures of Author Sammon Scene with the main actors. Keep watching this space as we promise to bring you more goodies!