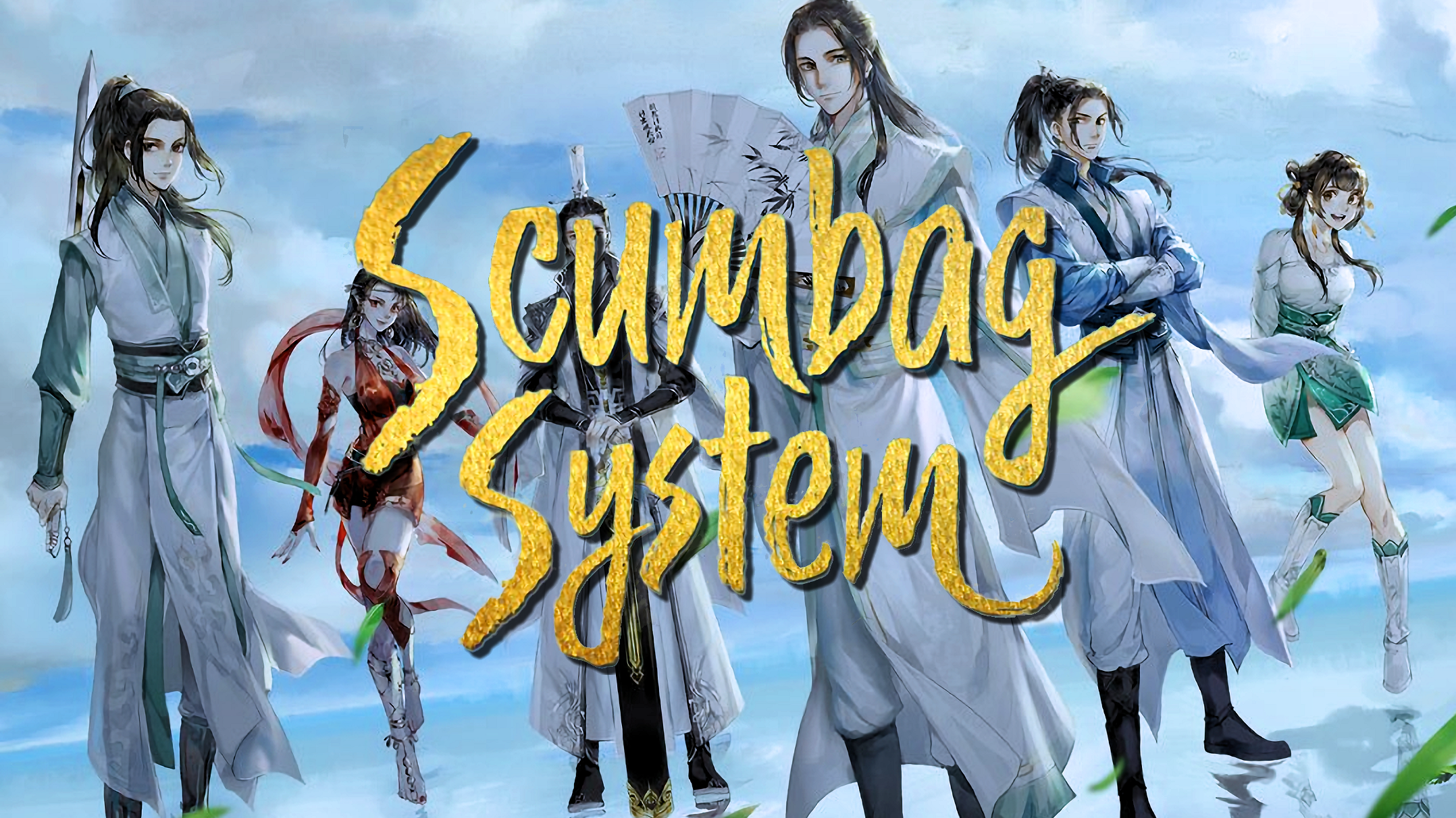 The most anticipated Chinese Donghua of 2020 is finally here. Yes, you guessed it right! I’m talking about “The Scum Villain’s Self-Saving System” 3D animation series. “Scumbag System or 穿书自救指南,” which roughly translates to “Survivor’s Guide to Novel Transmigration,” premiered on various WeTV platforms airing weekly episodes from September 10th, 2020. The anime Chuan Shu Zijiu Zhinan, which has been the talk of the town for the past few months, is a “Bromance” adaptation of Chinese BL web novel Ren Zha Fanpai Zijiu Xitong by MXTX (墨香铜臭 Mòxiāng Tóngxiù), originally published on Wen Xue Cheng. For those who haven’t yet recognized the name, MXTX is the author of the famed “Untamed” series.

Scumbag System chronicles the journey of nerdy Millenial Shen Yuan, who transmigrates into one of his favorite novels as the central character Shen Qingqiu. However, it’s his bad luck because Qingqiu was a scum villain who mistreated his young disciple Luo Binghe and ended having a horrifying ending. This story is somehow resplendent of “The Husky and His White Cat Shizun” or Haoyixing by Meatbun Doesn’t Eat Meat, which is being adapted into the live-action drama “Immortality.” The storylines for both novels have similar depictions of the Master-Disciple relationship. In Haoyixing, Emperor Taxian Jun goes evil and punishes his Master, Chu Wanning, before reincarnation to redeem his past life’s mistakes. I’m not sure about the probable similarities between the two novels as I haven’t read “The Scum Villain’s Self-Saving System” as of yet. But the premise is interesting, and the characters are hilarious, especially Shen Yuan.

Shen Qingqiu is the villain of Shen Yuan’s favorite novel. And Shen Qingqiu is the Qing Jing Peak Lord and a cultivation master. The original Shen Qingqiu is described as extremely devious and calculating. He has cultivated enough to maintain his youthful appearance. Also, he is capable of his spiritual energy to send a powerful punch towards his enemies. He is an able swordsman and wields the XiuYa sword. Qingqiu has serious issues with his young disciple Luo Binghe and severely tortured him beyond limits.

Shen Yuan, on the other hand, is nerdy yet sarcastic and rich Millennial. When he suddenly transmigrates into Qingqiu’s body, Yuan is left at odds on how to save himself from Qingqiu’s horrid ending. He has a hilarious personality, and his internal monologues or arguments with the troll system make for an interesting watch.

Luo Binghe is described as a tall and extraordinarily handsome youth, with a pair of bright shiny eyes, a bright, sincere smile, and a humble look. He is a faithful disciple to Shen Qingqiu despite his Master’s abusive nature. Sgen Qingqiu especially tries to hinder his cultivation by giving him a different cultivation book. He wore white clothing in his life as a disciple, and Shen Yuan often refers to him as the “White Lotus.” However, after his blackening, he develops demonic powers and grows evil. With the reveal of his demonic heritage, Luo Binghe gains a red mark on his forehead. After his blackening, he grows cold towards everyone except Shen Qingqiu. He possesses Heavenly Demon Blood and has abilities like fast regeneration as well as dream enchantment. Luo Binghe wields Zheng Yang Sword and Xin Mo.

Chuan Shu Zijiu Zhinan or Scumbag System is the story of Shen Yuan, who transmigrates into a harem xianxia novel as the scum villain Shen Qingqiu. Qingqiu’s disciple, Luo Binghe, is the main protagonist of the novel who turns darker as his Master and his Seniors mercilessly bully him. With the help of an automatic troll system, Shen Yuan is tasked to change the ending of the novel by making changes to Shen Qingqiu’s character sketch. As Shen Yian begins his journey to stay alive and undo the damage done by the original Shen Qingqiu, he develops romantic inclinations towards Luo Binghe. As the system limits his actions, Shen Yuan tries hard to save himself from the predestined horrible ending that Shen Qingqiu faces.

Will two antagonists fall in love? Can Shen Qingqiu turn the events of fate and stop Luo Binghe from turning darker? Will Luo Binghe be able to forgive his Master’s evil deeds?

My Opinion About the Pilot Episode

It’s not every day you get to watch a pilot episode with a very handsome Dark Lord sitting atop his throne surrounded by his harem of women while the villain is dragged into the main courtyard bottled up in a giant vase? Yes, that’s abominable, and while you wonder what is happening, we are thrust into the middle of a backstory about our Demon protagonist Luo Binghe and his Evil Master Shen Qingqiu. The prologue is pretty interesting as we are given a quick rehash of their antagonistic history. In keeping with the author’s ludicrous writing style, the dialogue is pretty funny, and you can’t help but laugh. It’s absolutely unbelievable as you reach the final chapter of the story and realize how ridiculous it sounds.

The cliché storyline belongs to a web novel, “Arrogant Gods and Demon’s Journey,” and our protagonist, Shen Yuan goes online to post his comments; a petty war of words breaks out between the loyal fans. It makes me wonder if this is what happens in real life as well because there are people supporting the absolutely shady characters as well the totally abysmal story. How can you be loyalists to such extents There is a fine line between good drama and bad, so how do you choose them? While our protagonist retorts back to their insults, in an ultimate role reversal, Shen Yuan chokes on his food and transmigrates into the very universe, about which he was dishing trash. I was just shocked by this sudden twist because it is equally intriguing and bizarre.

As Shen Yuan wakes up, he is addressed by the novel’s automatic troll system as well as Yue Qing Yuan, the Master of Heaven’s Sky Clan. Such an ambiguous parallel because the troll system is only visible to Yuan and not Qing Yuan! Waking up into the body of a dreaded villain Shen Qingqiu is traumatizing enough, and so Shen Yuan screams his lungs out. I shouldn’t be laughing so hard, but I really don’t understand why the troll system transmigrates this comic character into the body of a heinous villain. They are in no way alike, and the contrast is so tangible. While Yuan tried to get his bearings straight, the troll system orders him to engineer a better and classic ending for the novel.

Shen Yuan’s internal monologues are damn hilarious. That’s because he has already read the novel and knows the consequences of what will transpire. Watching him berate Shen Qingqiu in the mirror shouldn’t be so funny, but you can’t help but enjoy his honesty. His character is at odds with Shen Qingqiu, and he doesn’t understand how he will redeem himself in Luo Binghe’s eyes. Not that the troll system makes it easy for him. He is served with the “OCC Alert,” which means anytime he acts “Out of Character,” his points will be deducted. Watching Shen Yuan struggle is a highlight because essentially, he is soft-hearted, so he cannot bring himself to inflict torture on the beautiful Luo Binghe as Shen Qingqiu did.

As Shen Yuan has been thrust into a world where Luo Binghe is still a kid and hasn’t developed a temperament yet, I’m looking forward to watching how he will undo the damage that Luo Binghe suffered at Shen Qingqiu’s hands. The cultivation Master was certainly evil, which is quite discernable from the wounds on Luo Binghe’s body when he first meets Shen Yuan. Yuan’s helping tendencies are at war with the troll system incurring warnings as he tries to navigate his way through a minefield. On the one hand, Yuan wants to reach out and help the poor orphan kid, while on the other hand, he is faced with the obscurity of obvious point’s deduction. This series is not going to be an easy journey as Shen Yuan cannot live his life in the shadows of an Evil Cultivation Master.

Another important facet of this drama is Luo Binghe’s subservient nature. He thinks quite highly of his abusive Master and never criticizes him. The kid is gentle, hard-working, and outside his friendship with the unruly disciple Yingying, he doesn’t seem to have much of a life. Just a tragic childhood! Shen Qingqiu’s insecurity breeds from the fact that Luo is undeniably handsome and is destined to be an exemplary Martial Arts Master. Shen Qingqiu has destructive tendencies, and his precious disciples mirror his actions to bully Luo Binghe. It will be an uphill task to resolve the apparent tension between Master and Disciple, and I’m looking forward to watching how this mystery unravels. The first episode ended on a massive cliffhanger, and the next week’s episode will unlock quite a lot of variables.