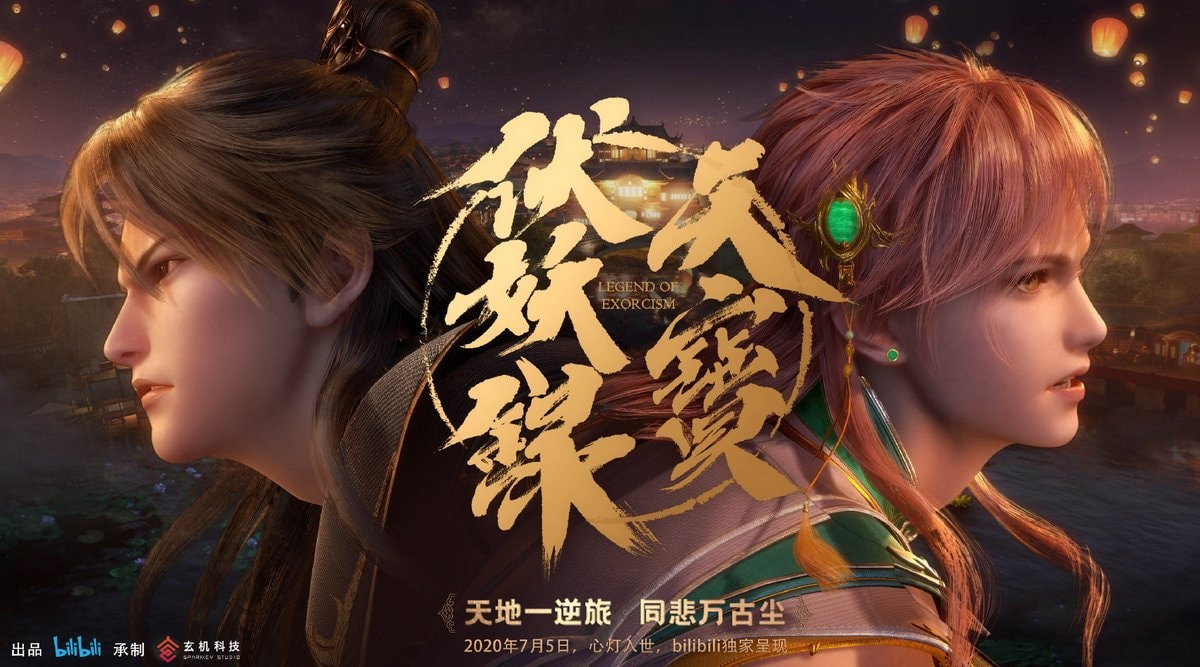 The second episode of Legend of Exorcism is rather slow-paced with major character introductions. The show is setting a precedent to the importance of the erstwhile “Court of Exorcism.” Although the Court isn’t exactly revered in its current dilapidated state, it’s rise to popularity rests on the shoulders of our heroes, who, under the leadership of General Li Jinglong, will battle the demons to maintain the peace and safety of the citizens in the city of Chang’an.

General Li Jinglong is the Royal Army Captain. Despite his high status, he is an object of ridicule by both his subordinates as well as his cousin brother Feng Changqing. He wields a powerful sword that breaks Hongjung’s Heartlight and has the power to track demonic presence.

Feng Changqing is Li Jinglong’s older cousin and also the Deputy Guard General of Xi’an. He is a Military veteran who was disabled while serving his motherland. He is intolerant and despises Li Jinglong.

Longji is the Emperor of Tang. He doesn’t seem to have personal opinions of his own and is swayed by the Prime Minister or his Consort’s words. Like most people in the city, he doesn’t believe in the existence of Demons and is dismissive towards Lord Di and his Court of Exorcism.

It’s obvious from her demeanor that Yuhuan is shrewd and has a sharp intellect. Unlike her husband, she draws her conclusions from evidence, keen observation, and cannot be easily swayed. She has a strong presence and is surely the power behind the Throne.

Yang Guozhong is as dismissive of the rumors about Demons as the Emperor is. Hence he tries to brush off Li Jinglong and projects him as a senile individual. He continually tries to butter up the Emperor, and his motive for doing so is still unknown.

Lady Guo is not only the Prime Minister’s wife but also the Consort’s sister. There are quite a lot of differences between the various factions as the Imperial Consort brushes off her concerns.

As Hongjun follows the Turtle Fish Demon into the city of Chang’an, the Royal Guards mistake him for a demon and accost him instead. A chance encounter with their General Li Jinglong leads to an unprecedented situation where Hongjun’s Heartlight chooses Jinglong as its receptor. A thoughtless mistake on Hongjun’s side lands Li Jinglong into trouble, and his reputation is marred. The news reaches the Palace where the Emperor decides to appoint Li Jinglong as the Chief, Court of Exorcism, to prove his point about the demons scurrying the streets of Chang’an.

When Hongjung is attacked by the Royal Guards, his feather-light charm reacts and diverges their arrows. But the most shocking part is Hongjun’s encounter with Li Jinglong. As Jinglong mistakes him for a Demon and is about to strike him, the Heart Light breaks into pieces and explodes. Everyone gets unconscious from the explosion except for Hongjun, who demonic powers protect him. Qing Xiong had given explicit orders that the Heart Light should be handed over to Chen Shiyi or his descendants. Then why did the charm choose Li Jinglong as it’s receptor? What is his connection to the Chen Shiyi clan? Also, we really need to mention the awesome CGI effects that Sparkly Key Animation Studio has conjured for this anime series.

Since Kongjun has never been in the mortal realm, he is unfamiliar with their customs and traditions. Unknowingly he drags Li Jinglong to a nearby brothel and tries to ascertain the presence of the Heart Light. Zhao Zilong rebukes him and suggests that Hongjung should kill Jinglong. However, despite being a Demon, Hongjun has a pretty strong conscience and accepts his mistake. I’m surprised by Hongjun’s character sketch. He is a Demon Prince, was born to a powerful Demon, and yet displays human sensibilities like innocence and guilt.

Li Jinglong’s reputation is scandalized when he is discovered at a brothel. His relationship with his cousin, Feng Changqing, is tumultuous. Despite being the Deputy General himself, Changqing harbors deep hatred and resentment towards Li Jinglong. Changqing doesn’t believe Jinglong’s when he insists on the presence of Demons in the city and insists on punishment for disgracing their ancestors. It’s obvious from his rude demeanor that being handicapped, Changqing has deep-set insecurities, and Jinglong becomes his punching bag for the strenuous release of his negative emotions.

Yang Yuhuan, the Imperial Consort, is a very interesting personality. While Li Longji, the Emperor of Tang, is getting carried away with Prime Minister Yang Guozhong and his wife Lady Guo’s misconceptions about Jinglong, Yuhuan stops them. Longji is besotted enough with his Consort to consider her suggestion seriously. However, Longji’s decision to appoint Li Jinglong seems like an attempt to undermine his authority and prove his claims wrong.

The newness of Li Jinglong’s promotion doesn’t seem to please Changqing, and he makes his disapproval apparent. As they walk towards the Court of Exorcism, Jinglong’s confusion shows. On the other hand, our Demon Prince can’t stay out of trouble. His fly cutter that got stuck into the Turtle Fish Demon is still missing. As Kongjun roams the market, I’m fearful of what new trouble he would conjure. Will Li Jinglong and Kongjun’s second meeting be as disastrous as the first? The Demon Leader is seeking out the fly cutter’s owner. Will Li Jinglong provide protection and guidance to our innocent yet oblivious Demon Prince? This episode certainly left me with more questions than answers.

Keep watching this space for further updates on this ongoing fantasy anime!