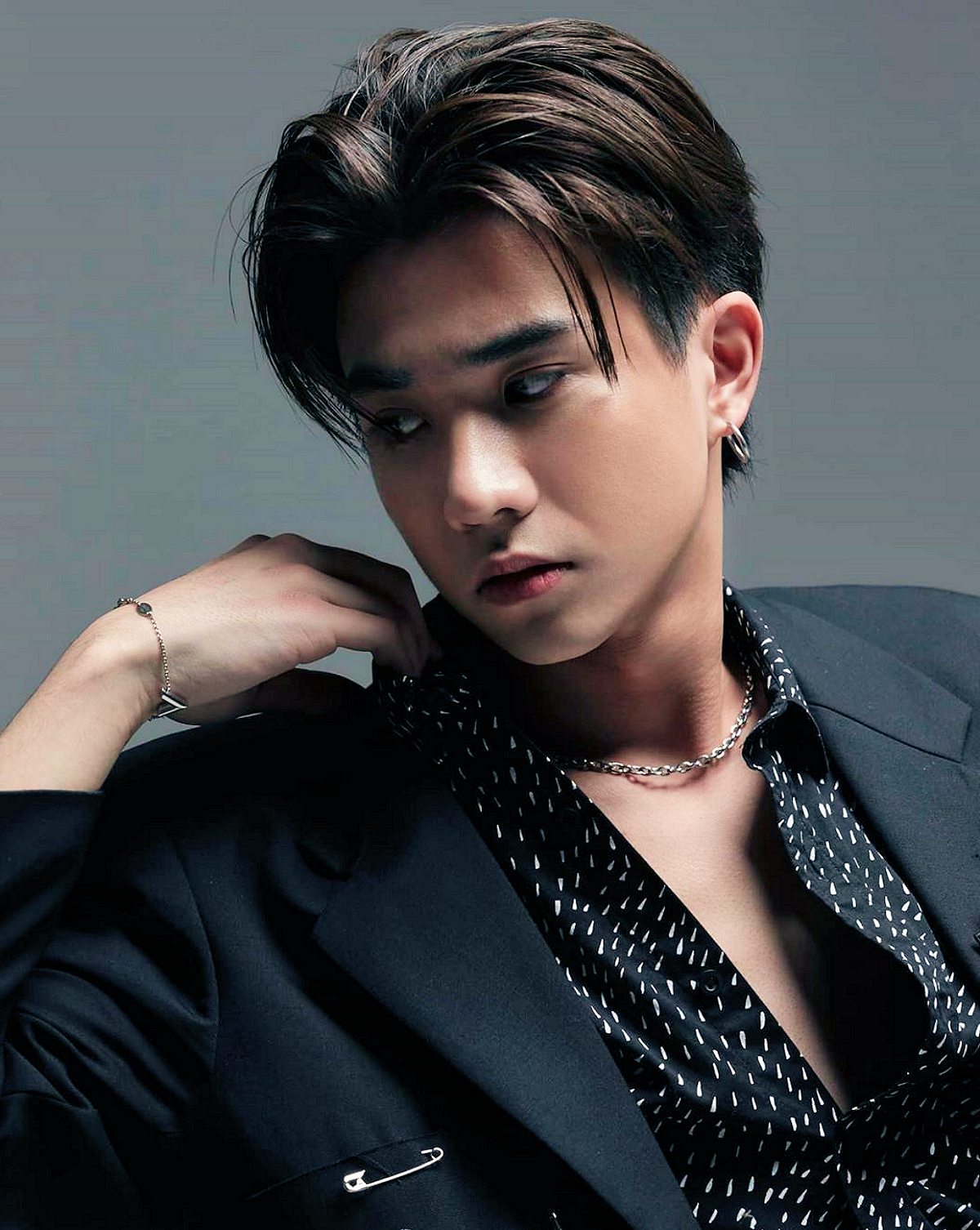 Tanapon Sukumpantanasan (ธนพนธ์สุขุมพันธนาสาร), was born March 20th, 2001 in Bangkok, Thailand), nicknamed Perth (เพิร์ธ), is a Thai singer, model, and actor. He became insanely popular with his portrayal of Ae in Love By Chance (2018). He is also part of a Thai boy band called TEMPT formed with his LBC co-stars Plan Rathavit Kijworalak, Gun Napat Na Ranong, and Title Kirati Puangmalee.

Perth As an Actor

Perth made his acting debut by playing the Support role of Breeze in Please… Seiyng Reiyk Wiyyan. He has also played Guest Roles in Kao Waan Hai Noo Pen Sai Lub, and the hugely popular Until We Meet Again.

However, what established Perth’s dominance as a bankable actor was his portrayal of Ae in the hugely successful drama series Love By Chance. The drama centered on the relationship of Pete portrayed by Saint Suppapong and Ae played by Perth. Both are opposite, with Pete being openly gay yet shy. Ae, on the other hand, is fearless, honest, and blunt. They meet when Ae accidentally hits Pete with his bicycle. Their journey starts off as acquaintances but evolves into more as the adorable Pete brings out Ae’s protective instincts.

Despite being a relative newcomer, Perth played Ae with a conviction that made the character memorable. Like in this scene where Pete is severely assaulted by an ex-boyfriend, now bully. Ae immediately rushes to help the injured Pete. Although, at this point, there are no feelings involved, Perth managed to convince the audiences of how much Pete’s vulnerability affects him. He is unsure of his feelings, yet the worry is reflected. A beautiful and subtle shift played off amazingly by Perth.

Their (#AePete) first kiss was hesitant and shy. The critics may argue that it didn’t have the right amount of passion, but I disagree. Pete might be openly gay, but Ae has always categorized himself as on the straight side of the spectrum. However, that doesn’t stop Ae from accepting his growing attraction to Pete and enjoying the first kiss. Perth managed to betray the confusion that Ae felt wholehearted and made the moment special for all BL drama addicts.

Although Ae is undoubtedly one of a kind when it comes to being a BL drama main lead, the character surely has its flaws as well. Ae is highly possessive bordering onto sudden temper flairs. Like the locker room scene, where he sees Pete and his friend Tin together and drags Pete out of there with him. What follows is a blatant display of alpha energy where he asserts his dominance. From someone who is certainly new to this territory, Perth surely sets the screen on fire with his hot chemistry with Saint.

The audiences were happy whenever they saw Pete and Ae (#AePete) together because they are the right mix of sweet and sensual. You need to understand that Pete is a highly insecure character. But Ae understands him well and gives him the reassurance that every healthy relationship requires. Ae is considerate and always puts Pete’s needs ahead of his. He can be sweet when Pete sulks but turns assertive when he thinks that Pete is being irresponsible. I was pretty amazed by how level headed, Perth’s performance was throughout the series.

Perth was 17 years old when he started shooting for this drama, but he played this extremely mature character with ease of a veteran actor. What made the drama hugely successful was the lead pair’s chemistry. #PerthSaint totally clicked on and off-screen. Their love story had the right amount of passionate skinship, coupled with trust between the main characters. Perth managed to carry the burden well on his shoulders. He might have faltered a bit in the initial episodes, but his performance improved and was consistent throughout the series later on.

Riding on the wave of popularity, #PerthSaint were next roped in to play the main leads #PinSon in another Studio Wabi drama ReminderS. It was a 3-episode short series, which focused on three couples in various stages of relationship dynamics-on how trust, jealousy, and insecurity is the cause of major discord in most relationships.

The most significant difference between #AePete and #PinSon was not just the considerable changes in their personality but also the dynamics of their relationship. While Saint played the aggressive character of Son, Perth was challenged with playing less assertive Pin. The character Pin lacks the confidence that LBC’s Ae so proudly displays. Despite the insecurity issues plaguing the relationship, the on-screen chemistry was unfazed. The new characters seemed to be in sync with the #PerthSaint inherent nature, and hence the acting seemed convincing. Perth truly shone in the last episode, where Pin breaks down and shares his insecurities with Son. His tears are instantaneous, and the audience was able to connect with his inner turmoil.

Next, Perth played the Guest Role of Somkrit, In’s best friend in Until We Meet Again. This role drew quite a lot of appreciation for the mature way Perth handled the character. In an age where homophobia was prevalent, Somkrit stood beside his best friend when he decided to hit on a mafia lord’s son. He never once discouraged them or their relationship. Perth was applauded for the positive message his character delivered to the fans.

The Stranded is Perth’s new journey into BL dramas. The show focused on 37 private school students who are abandoned on a remote island due to a tsunami. When mysterious happenings surround them, the teenagers realize that they are stranded, and their only hope of survival rests on them working together to get off the island. You can read our review of the drama series here.

Perth Tanapon plays Krit, and Mark Siwat plays his on-screen childhood sweetheart Jack. Stuck between a catastrophe, this couple’s sweet, sensual relationship is somewhat doomed and utterly sad. What made them different was the distinct lack of seme-uke characteristics. Displaying both domineering and submissive characteristics, Krit and Jack (#KritJack) are probably one of the the first versatile couples in a BL show.

As quoted by the Publisher Red of Psychomilk, Perth was required to do dramatic, demanding scenes that show mixed emotions. As Jack’s partner, Tanapon gave an inspiring performance that borders on tragic, which is certainly a milestone in Perth’s young, blossoming career.

Perth has been signed in to reprise his role as Ae in the second season of “Love By Chance Season 2”. He stars in a support role, and the fans were disappointed that Saint wouldn’t be joining the cast.

Perth’s Chemistry With His Co-Stars

The characters Ae and Pete (#AePete) were celebrated as a complete package and sweet couple. The major credit for this successful combination went to Perth and Saint, being comfortable enough to do the bold scenes that required lots of passion and aesthetics. Perth and Saint complemented each other, and the fact remains that Saint being older took care of Perth. Initial reports suggest that they were really close to each other, and as such, this comfort translated to a great chemistry on-screen. Perth’s Ae provided the perfect support and strength to Saint’s Pete, who was entirely vulnerable and insecure. A match made in heaven and truly adored by all the fans.

But soon there was trouble in the Paradise. Major discords caused by both the actor’s management. Saint’s agency accused Perth’s management of excluding them from significant events, which Perth’s agency denied. Further problems arose when Perth’s agency made claims that Saint’s agency wasn’t asking enough money for major events. The issues skyrocketed when both actor’s agents accused each other of promoting their own ships- Saint with Mean Phiravich and Perth with Mark Siwat.

The problems still haven’t ceased, despite the Second Season for LBC being announced. There are claims that Saint was excluded from the cast on the insistence of Perth’s agency. I personally feel that dirty politics between the agencies destroyed a great friendship, which had all the potential to become the next “Thai BL power couple.” What an utter waste of good chemistry.

Perth’s chemistry with his Tempt bandmate Mark Siwat is good too. They are both very close friends and were comfortable playing an already established relationship, which requires a certain level of closeness and personal history.

As quoted by our Red, Publisher of Psychomilk, Perth and Mark have a rather explosive chemistry that is both naughty and sincere. They both tried to dominate one another, but Perth has the physical stature while Mark has the inner strength to dominate. Whoever is behind their pairing is a genius because he discovered two Thai actors who can fascinate and intrigue fans and the general audiences. Their chemistry is very liquid, very unpredictable.

Perth As A Person

Perth is an only child. He is currently a freshman at Srinakharinwirot University (SWU), majoring in Innovative Media Arts and Acting and Director Training. He enjoys playing guitar and loves gaming. His favorite artist is Big Bang’s G-Dragon, and his favorite movie is ‘The Good Doctor.’ He is also a huge fan of the football team Liverpool.

He is a member of the popular boy band “TEMPT” alongside Plan, Gun, and Title. The band is being managed by AttractorTH. They released their first Single called “Tell me this is love” on July 24th, 2019, which attracted 1.5 M views.

They released their second single “Be With Me Tonight” on March 18th, 2020, which has so far scored 844K views on YouTube.

According to recent media reports, Perth’s team made an announcement that Love By Chance Season 2 would be the actor’s last BL drama. Based on our limited (yet confirmed and verified information), it appears that his managers and agents have an agenda of their own. This event caused an uproar amongst Perth’s massive BL fanbase, who accused them of insulting the LGBTQ community and of potential bias against gay or BL roles. Will Perth follow up on his agent’s decision to quit BL dramas in the future or get rid of his current management, and take a more active role in his ongoing career? Keep following this space for more updates.