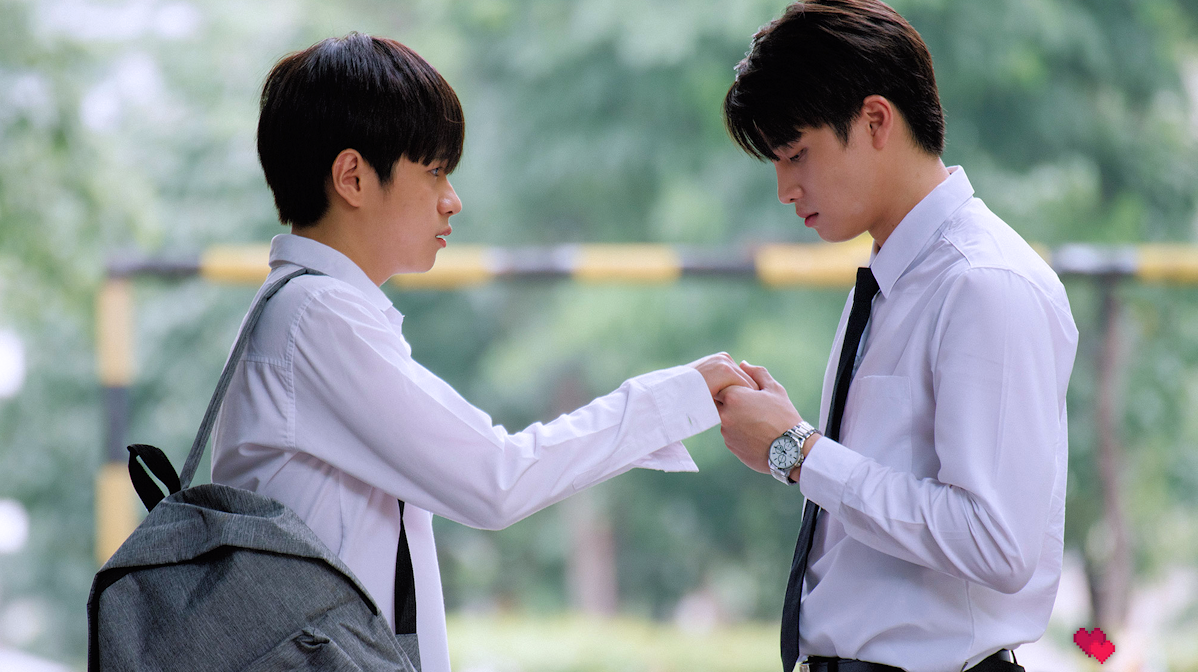 Beginning with Tin, Can, and Lay (Lemon, Can’s younger sister using her nickname now) at a mall restaurant, details about Can are revealed. Tin’s view of Can changes now aware of what a good person Can actually is. Techno learns his brother is aware of his moment with Kengkla and runs away to Type. Ae, still smarting after the intervention from Mai, contemplates making changes. Tul and Tin have another tense conversation that upsets Tul. Tul visits a teacher or teacher’s aide named Hin, and they share an intimate moment.

This episode is the best-written of the season thus far. It systematically answered every question fans have had about these characters while making new ones. It unapologetically continues the Tin and Can alternate timeline, while showing almost all of the cast after “Love By Chance.”

The way it is presented is cleverly done by having none of the new-to-the-series-cast or alumni save Ae and Can’s sister interact with them. This way, details about their shared history can be ignored. Characters like Technic and Kengkla finally make an appearance, along with Tum and Type are mentioned. The flipside of this is I don’t understand why they stretched the introduction to the overall plot to three episodes. The writers essentially sum it up cleverly in this one.

Beginning with Can, Tin has been very curious about why Can acts the way he does, or at least that is the new impression all those scowls give us. In this episode, when Can mocks him or says something blunt and walks away. Tin is left to question whether he can trust him. Over lunch with Lay, who lays out Can’s backstory to a moved Tin, we see him comprehend the fact that Can is not faking his forever optimism. He is just that good of a person.

Techno and Kengkla’s story so far has only been mentioned in Techno’s musings when alone. The fact that this storyline is playing off the finale of “Love By Chance” rather than acting as a rebooted version confirms its just the main characters who were rebooted.

So background, in the finale of LBC (Love By Chance), Kengkla took advantage of a very drunk Techno. In this first time showing Kengkla, you see he isn’t alone with Techno but is joined by Technic. Technic is Techno’s little brother, who literally trades access to Techno to Kengkla in exchange for favors involving dating girls at their High School. Yes, it is as messed up as it sounds.

Technic and Kengkla are students who made little deals that allowed Kengkla to manipulate situations so that he knew Techno’s whereabouts, or was there. These machinations do sound a bit like a Yaoi villain I know, and it does stay nefarious as Technic explains to his older brother he is fully aware of what Techno and Kengkla have been up to (having drunken sex). Techno’s head is spinning as Kengkla uses honey-dipped words to speak to him and Techno runs off to meet Type. This version of the story being Mame’s version, whether that meeting with Type will initiate the Technic love story or not remains to be seen.

Techno, happy over having had sex with Kengkla, tries to get his racing heart to slow down. He once again does an internal monologue out loud about maybe having a boyfriend before dashing off. The scene is well acted as the characters are trying to make the best of the situation. This sort of thing is not for everyone, a victim of rape not reacting with the “normal” way we’d expect but instead seeing it as a start to a romance is, for lack of a better word, “Weird.” With that said, when you recall the event from Season one, what exactly did Techno do after the rape? Not much, so its a not a stretch to say that the entire point of his character in this version was to exist in the center of a cute romance.

Ae, being awoken by an overly zealous Mai, brings us back to what once was the main character of Love By Chance. It’s interesting as to why Mai is so involved in Ae’s recovery. We won’t find out why this episode, but Mai is determined to get this drunkard back to school. Pond, of course, misconstrues the situation and admits to shipping Mai and Ae. After the last three episodes, I can safely say I am with Pond on this one. Their moments seem a bit rushed or like a chore the episode has to get through to get back to the actual plot. It’s sort of depressing because again, Ae is the main character of the original series. This group does nothing of interest in this episode except for product placement and creating a new ship.

It wouldn’t be “A Chance To Love” if it didn’t come back around to Tin and Can, and it does delightfully and delicately. A much nicer Tin drops Lay and Can off at home, and I want it noted that I adore this more mature and soft Tin over cold, jerk Tin. Can, of course, is still Cantaloupe, and because of Tin’s rudeness before, he wants to get away from Tin as quickly as possible. That said, he is very cute about it, literally “Shoo shooing” him away, much to Tin’s chagrin.

By this point in the episode, Tin has reached a conclusion about Can, and after politely saying Goodbye to Lay, he turns his attention to him. Since Tin opened up to Can and then lied, saying he was kidding, Can has been rude to him. Can started acting like he was better than Tin to the point of being dismissive, so having Tin level the playing field by not only getting Can to speak nicely to him but also get two kisses was well-deserved. It did feel like a Tharn and Type battle of wills for a moment, but when Tin broke the second kiss and delivered that line, “You are cuter than those girls” to a stunned Can. We know who won.

The filming of this episode so far is amazing; the set designs, dialogue all are much better and more planned in regards to the first three episodes. This episode felt a bit like coming home to me as familiar music played.  Now with that said, it did feel a bit unnecessary to include Tum at all. His character is shown without Tharn or anyone else but one bandmate for a moment of perspective. If you watched Love By Chance, then you know Tum is very much in love with his stepbrother Tar. So seeing the fellow musician trying to flirt with him was like watching oil mix with water—poor guy.

We are at the point in the series where we know if Tin and Tul are in the same room, sparks fly. This time we see Tul is finally showing cracks in his armor at the sharp words Tin flings at him. Moments of anger appear as Tin’s words graze over sensitive areas for the older brother. Once their Mortal Kombat of words is done, the scene shifts to a nondescript man. He’s sitting in a classroom grading papers while two girls gossip about Tul having a girlfriend. Hearing these statements cause emotional distress to the man who tries his best to appear neutral. When Tul appears and notes the man’s sadness, he takes him from the room. The two talk in a hallway, and I am in love with the imagery of this scene. There’s the height difference and the need for secrecy as we are finally given our first look at Tul and Hin.

Up to this point, every move Tul has made has been calculated, planned, and artificial. However, in Hin’s presence, he is unguarded and emotional. Seeing the acting range of Meen Nichakoon (Tul) was astounding. Maybe its because for three episodes, I have only seen him smile snidely and poke at Tin. But seeing him declare his love and ownership of Hin was very upsetting and emotional. Stating he is the only one who can make Tul cry should have been dark but the way he said it was almost like “I’m the only one who gets to touch you,” and so I was pretty well with it. These two are the living embodiment of the Yaoi Seme-Uke dynamic. Hin, quiet, reserved, and submissive to Tul, stark, direct, dominant to the great height difference when they hugged each other.

The fact all that happened in only 6 minutes was so impressive I am now very curious what these two have in store for the show. Was that badly presented and a flashback, or was that in the present? Will Ae and Mai have an actual romance, or is Ae going to volunteer camp to be off the show for a while? Will Tin and Can be nice to each other??? Will the new additions to the show have proper screen time? Hopefully, we get some answers next week, but I can say, “A Chance to Love” finally has my attention.