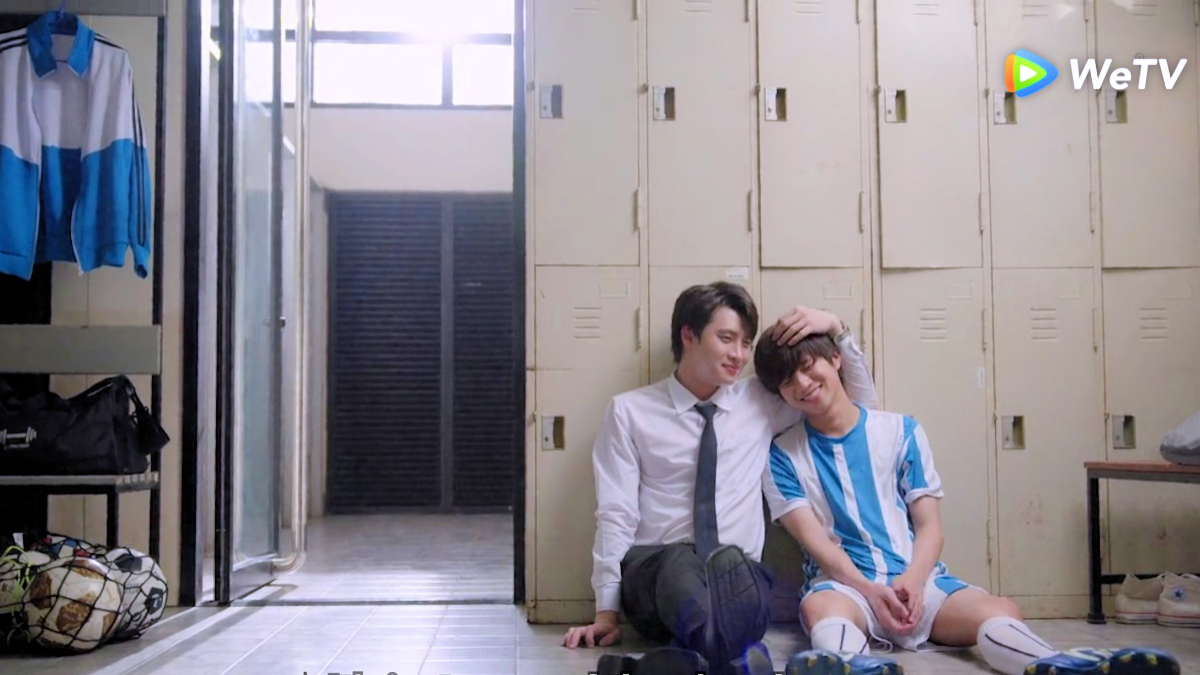 Beginning where “Love by Chance” ended for Can and Tin with the boyfriend question. Can plays dumb while Tin patiently weeds through his many questions on why they should change their status. Can politely refuses again and finds advice from his friends on what he should do.

Tin meets an opportunistic girl determined to be his girlfriend. Can sees this and becomes jealous and trains harder than ever to win the championship soccer game. Ae, having observed both Tin and Can, offers both much-needed advice. Kengkla’s attempts to comfort a disappointed Techno are rejected. The episode ends with Can and Tin talking again, this time honestly.

We are finally at the moment that broke my heart two years ago. The moment Tin asks Can to be his boyfriend, and I admit I was ready. The weird pacing of this “Sequel” has had me very confused about whether or not this was ever going to happen at all. If you can’t tell, I am a TinCan fan, have been since I read “Accidentally in Love” by Mame. I even have a TinCan coffee mug. So this sequel series has filled me with mixed feelings throughout its broadcast because, honestly, it’s not a sequel. Not in the way we think of sequels anyway.

Tin and Can as the main couple is totally fine, but rebooting their relationship and adding personality traits they didn’t have in the prior season changed their dynamic. Restarting them and making Tin nicer and Can meaner took the ‘sequel’ (generally defined as a continuation of the story with the same characters) out of it for me. Be that as it may, I have waited for the moment they deal with whether they are going to date or not. This version is wordier, with more emotion from both actors than in the original version. This moment is the reason to watch this show. It’s an all fleshed out version for Tin Can, who are the main stars of it now that Pete actor Saint is doing other projects.

Above all things, this is Mame’s “Accidentally in Love,” therefore, it doesn’t shy away from spending time on what it feels needs the most time. The episode doesn’t present all the characters with even time slots. Some only get a few lines and are relegated to being side characters in this version.

Beginning with the question of will Can be Tin’s boyfriend (portrayed by a very sincere Mean). This performance contrasts with the original version, where he came across as stilted to me. This version is open and scared, his usual confidence gone as he goes against his own previous ideas by pushing for more from Can than Tin feels he deserves. We already know Can’s answer, but we get to see Plan’s emotionally drawn out response as a sexually confused Can. This time we see Can’s confusion as he tries to think beyond Ae and his fears of becoming like him one day. However, Tin is being too good at being concerned and is oblivious to Can’s worried expressions as he tries to use words accurately. It ends with Can wanting only friendship and Tin being emotionally broken by it.

In the more human take on the story, we get to experience Can’s mother and Lay in a cute dinner scene that speaks on how close the family is. The script creates a sense of domestic normalcy that centers around Can. Plan plays up Can’s sexual confusion and his apprehension at dating another man beautifully. He vents his frustration to the open air while Tin is visibly in shock. He has become so dependent on Can for emotional grounding in the cold Hell that is his life that being without Can is inconceivable. He weeps while holding himself. This hit so much harder than his screams in the shower from the first season. The cinematography of the two crying simultaneously and the image fading from one person to the other was gorgeous and tugged at my heartstrings.

One thing “A Chance to Love” has done that I personally loathe is this need to add characters who were not in the first season and use photos or conversations to integrate them into this one. Mai and Job are two characters who fit the bill here. The next segment is Job having lunch with Ae and Pond. Here we see the flip side of populating the show with new characters who have intimate friendships with the original cast. In conversation, the trio mention Chi Am (Pond’s independent woman with an attitude) who we have still yet to see. It’s obvious by this point we probably won’t. So I don’t understand the need to remind us so and so isn’t here but is offscreen.

It is nice to see Ae back to his old self again, grumpy, rude, and insulting. Can appears and wears his wounded heart on his sleeve for the boys. Tin is in class trying to think of the best way to text Can when some flirtatious classmate approaches him. His indifference is visible, but she is undeterred. Can wallows through scenes while confusing everyone who has no idea what he’s going through. No one but Ae; they talk, and Perth, finally having periods of lucid, non-drunk moments in his character’s life, highlights his raw acting talent. His Season 2 Ae is older, beaten by the world but still very present. Perth draws out the words he’s saying while looking forward and reveals his emotional state. It’s heartbreaking and sobering as you see Ae relax as he honestly displays what he believes love is. Ae goes ahead and gives Can the talk that only a best friend is able. All while looking at the lockers, he shoved Pete against two years before. You can feel his pain as he speaks to the air, wishing for Pete to be here with him again.

Ok, this next bit worked my nerves like someone kicked me. This show is asking a lot of viewers to put up with in a variety of ways. But creating a conflict in episode 7 for two characters who have been smiling at each other and flirting makes no sense. Kengkla and Techno have been skirting around the fact that they slept together and what it means that they both enjoyed it. Bare in mind Kengkla didn’t even enter the story until Episode 3. Even then, Techno did not seem angry that the high school student raped him and even seemed happy about it. So seeing Kengkla appear to flirt with Techno and then make a love confession at this point is acceptable. What isn’t acceptable is Techno’s displeasure with it. Kengkla admits to raping him and lying about it but is being sincere now. It’s been clear this whole time that Techno knew this already.

But when first faced with Kengkla, he was happy it happened and even said to the air (this show had these characters talking to themselves A LOT) “give me time,” and smiling goes off to see Type (Episode 3). But now he’s self-righteous and angry, which comes across as jarring for his character. This aspect has more to do with the script than the actors who do their best with it. It honestly felt like one of those moments where the script changes to suit the need for drama. None of those emotions were in the original series or earlier episodes of this season.

The pacing of the episode seems made to carry us from one dramatic part to the next. So we see Can wandering home after his talk with Ae. Upon seeing Tin’s car, he waits for him and see’s Tin and the girl from their class with him. Can hides behind Tin’s car to spy and gets the exhaust gasses in his face. These cute moments are a welcome bit of comic relief as they break from the drama. This event causes Can to get serious about soccer. Cue a montage of his efforts while his teammates speculate on what is wrong.

Now it comes to the characters who make no sense being in this show whatsoever. Tum is practicing his guitar. His friend points out Ae’s social media posts and asks him to meet with Tum. I’m hoping the show gives somewhere with him.

The next scene is product placement and not much else. Tin finally realizes that what the girl wants from him and lets her down. Can has become a jealous player as he makes demands and a montage of him working as hard as possible to get them through the final match.

Tin watches from the sidelines as Ae appears and gives him the advice to help him get back with Can. The very well shot and choreographed match is shown. We finally find ourselves back to where the show began with Can losing the game. Tin is taking care of him despite his hurt feelings. It’s by far the show’s best scene as we watch Tin hold Can as he cries, grateful to be able to do that much. The episode concludes with a heartfelt love confession while Tin patiently waits before saying how he shares his feelings. The way it’s shot, the use of light, the small smiles, and the script here are perfect!

This episode is one of the good ones as the show is now ½ good episodes and ½ bad ones. I don’t believe in creating conflict that’s merely there to remind the viewer, oh, by the way, this happened once. Every character, except Tum, serves a purpose. That’s unusual as some episodes’ characters are there for 5 minutes and then go to the store (Ae and Pond). The writing was pretty good, and the actors did the best they could, and they made me cry.