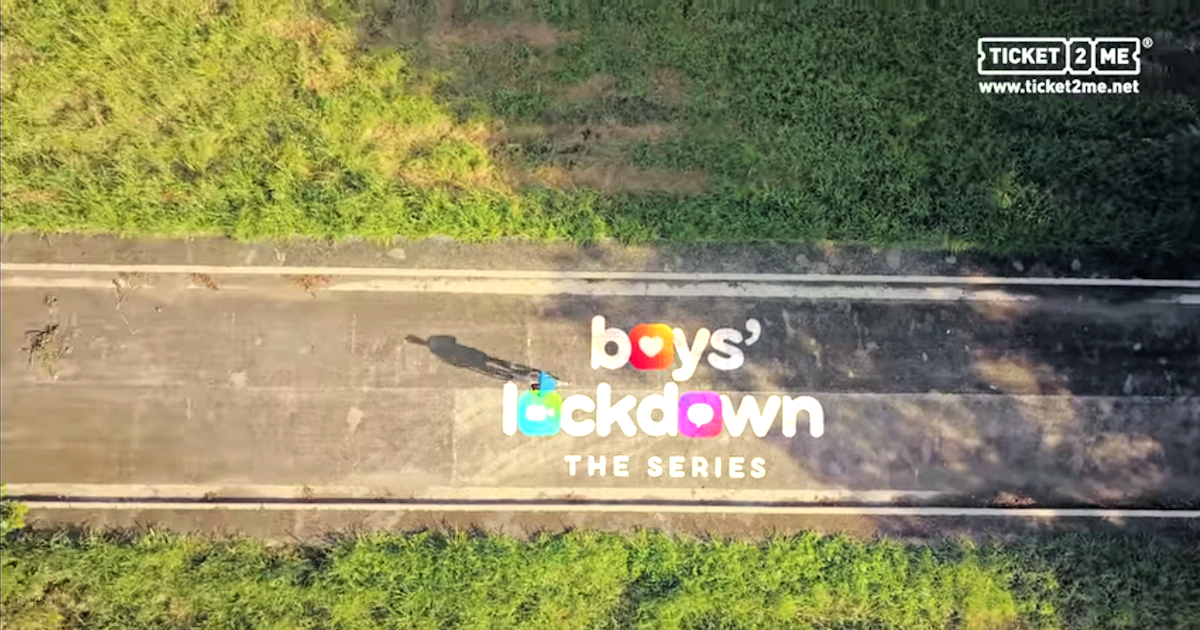 When the series was announced, I was a little skeptical to watch it. Because let’s be honest, we have many stories set in Quarantine times and love happening online. [Who am I kidding, are we still not seeing all the college Thai BL 😉 ]  But Pinoy BLs have managed to stay away from any sort of formula so far, and the leads for Boys Lockdown are kind of sweet, but not in a flashy way.

Even though I have my biases for pretty boys, I admire a show that does not totally depend on the actor’s face, but the leads actually make the story relatable with good performances.

Boys’ Lockdown tells Key and Chen’s story, who meet by chance during the community lockdown and later realize that they had known or met each other before as well but never got the chance to connect. When the Pandemic has kept us all away from social interactions, can love make us meet, despite the risks, is what the viewers find in the first three episodes.

Key is played by Ali King, an actor, brand endorser, model, and YouTuber. Boys’ Lockdown is his debut performance.  Chen is played by Alec Kevin, who is an actor, dancer, brand endorser, and model. He has acted in one movie before this series. Other casts and characters include Chen’s elder sister Libby, played by Teetin, the security guard at Key’s dorm, Whilce, played by Ivoy Colo, Key’s friends Dev and Martin, and Dicky. Together they represent the various moods and ways of life during the Pandemic. The Director of this series, Jade Castro, has directed a few movies and dramas before this and has also worked as a screenwriter for movies which reflects in the scene and dialogue setting for Boys’ Lockdown.

I happened to read the Executive Producer’s Notes for the Boys’ Lockdown Series Premiere by Darwin Mariano on YouTube and the fact that the BL series helped him cope a bit with the Pandemic. I can relate to his thoughts a lot. His notes on the cast and their personas offline add a layer of appreciation to their role in the series. I wish more shows had such notes and statements published because even though there are a lot of Live events and YouTube interviews are done with the cast of various shows, reflections by the Director/Producer always shed new light on the series and add to the appreciation for the work that has gone in to make the show.

And now, without wasting many words on how much I am enjoying this show [the answer is, I like it a lot ], I will tell you why you should not miss this one based on my impression of the first half of the series.

Fantastic Lead Actors And Characters – Be it the awkward in real life, Social Media influencer Chen or Key, the lonely student who gets super excited about the smallest of reasons, I found both the characters so much like real people. Alec did a good job in portraying the rich, playful Alec, who is a little shy in real life but makes it up with being a fantastic SM celeb on his anonymous account. He has a really positive vibe, and I was not expecting him to be the first to seek out Key because of his interest in him. Ali King is adorable as Key, more so when Key acts like an excited teenager or sulks about not meeting Chen when he wants. Both Alec and Ali are a delight to watch in the show and suit the characters perfectly.

Amazing Supporting Cast – Chen’s Sister Libby is one of my favorite things about this series. She is the voice of the common man when she rants about the Pandemic. Her meltdown in Episode 3 was so damn impressive because I had cried that morning because of similar frustrations. I loved that scene, and for once, I was glad that the story used its side characters well. Whilce, the security guard is hot and hilarious. I like his frank, kind, and easy-going attitude as he sits all day and makes sure that everyone follows the protocol and is lending an ear to Key’s love life issues. His presence adds so much charm and fun to every scene, even if he is just in the background. Key’s friends Martin and Dev are not mere placeholders in the series, and their interactions add more depth to Key’s character and the situation in the dorm. Dicky is another character who witnesses Chen’s and Key’s love story unfold in front of him and makes for another interesting addition to the show.

Production Quality – The series has a really good production quality, good lighting, brilliant dialogues (i can’t emphasize enough how good and natural is every interaction in the show ), and a feel-good vibe to every setting. The series was designed and meant to be a cute fluffy rom-com, and that’s delivered in every way.

Home – Home is a song peformed by Resse Lansangan, and is used in the opening credits, and it appears a few more times in the series. I like it when I keep hearing the same music to become an identity for the show and forever imprinted in my memory for all good reasons. I like this song so much. Check the YouTube video of the original song below –

If you are looking for a story with many dramatic moments, angst, and conflicts galore, this is NOT the show for you because I have seen four episodes so far, and this is cute fluff and just the right sweetness to make one smile while throwing in some really good banter for dialog. At least this one saves me the headache from all the misunderstanding that a certain Thai BL is giving me these days. I appreciate the characters who know there is something called communication and that it can save you and all around you from wasting their time.

One reason for that is that the show is just six-episodes long (it feels short, as well). In that duration, it plans to establish the characters and give the viewers a beginning to the relationship (fingers crossed, no sad/open ending, please) because I have read some rumors about a season 2 being made. Some might find the story too plain and kind of slow, but it worked in favor of this show, and I did not feel like abandoning it for any reason.