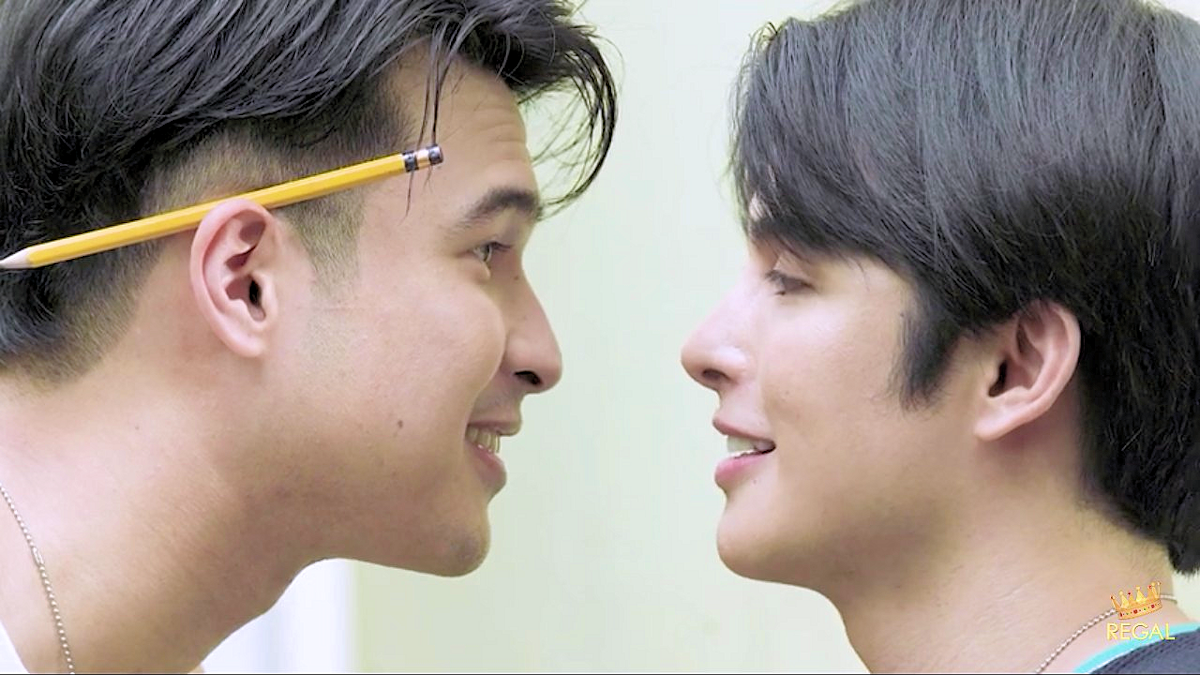 This episode left me more frustrated than ever. Everything was well in the “BenxJim” household until Jim’s girlfriend appears out of nowhere and crashes into Ben’s dreams. The fact that Jim is aware of Ben’s feelings towards him makes it even worse. While Ben decides to step back to give space to the “Happy Couple,” Jim keeps pulling Ben into his space, making things particularly difficult. I’m really worried about the “wear and tear” limits of Ben’s heart because a guy can get his heart broken only so many times. Ben has had his quota filled with crazy stalkerish ex-boyfriends and a very teasing love interest who doesn’t understand the meaning of boundaries. I won’t say that I was happy watching this, but good things come to those who wait patiently. For now, let’s review and vent out some frustration.

With Jim’s girlfriend Yana’s sudden appearance in their life, the conundrum is nigh. Ben watches jealously from a distance as Jim fusses over her and decides to maintain a safe distance. However, Jim decides to test Ben’s patience and drags Ben along to help arrange a special candlelit dinner for Yana. Olan, on the other hand, is becoming more courageous as he continues to flirt with Ben. Ironically, this flirting actually makes Jim angry. Despite that, the dinner happens, and an absolutely heartbroken Ben watches from a distance. Later, when Jim finds him on the crosswalk, Ben confesses his feelings but quickly retracts, saying that he was joking. Will Jim really believe his lie or see through the farce? Will Jim continue to be in a relationship with Yana or take a chance with his best friend?

Ben is a cute kitten whose hackles are up. Seriously, I should be feeling bad for this guy, but Teejay Marquez’s expressions are so spot-on that I ended up laughing. Jim is even more audacious when he takes Yana to the treehouse and purposely boasts about repairing it for her within earshot of Ben. It seems like he knows that Ben is watching them and is purposely provoking him. Since poor baby Ben is unlucky when it comes to having crazy friends, Flo shows up and makes the situation even worse. She can see that Jim has brushed off Ben in favor of his girlfriend, and yet she zealously accepts Jim’s invitation for lunch.

I don’t know what Ben did to deserve such friends, one drives him crazy by talking, and another is making him stew in jealousy. Jim knows quite well that Ben’s feelings towards him are anything but friendship. It’s subtle, and I’m frustrated because Jim is making it difficult for Ben. I’m not sure if he is doing it because he enjoys Ben’s discomfort or simply because he wants Ben to confess. But either way, I’m stoked. It is particularly difficult for Ben to watch them in the treehouse. I’m guessing it’s like their personal haven, and Jim has bought in a total stranger so that Ben might feel a little betrayal. I’m pretty sure that Jim knows he is hurting Ben, and yet he doesn’t stop.

The next morning Ben and Flo are selling a makeup palette on his online store when Jim calls him. Ben is already annoyed, so he isn’t going to pick the call. However, Jim doesn’t understand the meaning of the word “No.” So like Ben’s ex did, Jim takes to bombarding his Livestream with “Wifey” messages. He even turns up in person to disturb their Live and acts like he doesn’t know that Ben is online. I don’t understand his goal because he loves to play with Ben’s emotions. He can clearly see that Yana’s presence affects Ben, yet he asks the poor guy to help organize a dinner for his girlfriend (this is the limit, please someone take this guy away from Ben).

The next scene should have been a romantic one, and they do look good together. Jim being his usual teasing self, and Ben is contradicting him. The sexual tension is so thick that you could cut it with a knife, yet I was never so glad that Flo interrupted them. Jim needs to accept his own feelings first. If he wants Ben, he needs to break off his prior commitments and then pursue his best friend. On the other hand, Ben needs to learn from his past mistakes and stop falling for the wrong guy all over again. I’m glad that Flo warns that being so obvious about his feelings is unhealthy. She might seem overbearing, but she gives good advice.

Olan is one dramatic character who keeps getting into trouble. So next morning, he almost drives his bike into Yana, who makes a huge uproar over it. Jim jumps in to defend his girlfriend but backs off when Ben requests him to let the issue slide for this one instance. Ben’s worry for Olan raises Jim’s hackles (yeah, like you have the right to act jealous after parading your girlfriend in front of poor Ben.) Jim is so inconsistent in his actions that I wished Olan might propose to Ben (just to spite Jim and drive him crazy – tit for tat).

And so begins the torture. Jim and Yana enjoy their candlelit dinner while Ben watches from a distance desolated. The scene was sure painful because Jim acts like a perfect boyfriend and is being attentive. While you watch his actions toward Yana, you would wish that you have a boyfriend like this. Yana appreciates his efforts, and if this were a straight romance, I would surely like seeing them together. But this is a BL drama where the girlfriend is being used as an excuse to drive a wedge into the main characters’ relationship. Jim and Yana seemingly have a perfect romance that should be Ben’s. It was heartbreaking to watch Ben look at Jim with that soulful yet lost expression, thinking that some people are meant to be together while others aren’t.

After the dinner is over, Jim finds Ben sitting alone and drowning Ben’s sorrows in alcohol. Jim is unusually cheerful and expresses his happiness about the dinner being a success. Ben can’t take it anymore and finally confesses his feelings. Although the entire episode was frustrating, I really loved this scene. Ben is voicing his love for Jim, his wish about how they could be together, and that Society would openly accept them will tug at your heartstrings. I’m sure people living in countries where same-sex marriage isn’t legalized yet will understand his words and hope for the same.

The scene draws attention to the fact that love is still treated as an unequal entity and is reserved for the privileged based on caste, creed, gender, and sexuality. Shouldn’t every person have the right to love at free will and marry the person they love? I’m guessing this was the message the show’s producers wanted to put out there with this scene. Also, while Teejay delivers his lines perfectly, Jerome Ponce matches his expressions with a look of shock. Until now, Jim had been teasing Ben. However, when faced with Ben’s reality and the associated possible consequences, he doesn’t know how to react. I’m not sure if his shock reflects his own feelings towards Ben or merely because he doesn’t feel the same way about Ben. Jim’s angry reaction possibly sounds warning bells. If he doesn’t feel the same way, he certainly shouldn’t get angry when Ben retracts his confession, laughing it off.

I’m now looking forward to the next episode. Director Easy Ferrer tweeted earlier that Episode 5 would be the longest so far @ 36 minutes, and I’m guessing they have major ground to cover. The confession is certainly going to change their friendship. Scenes from next week show Olan asking Ben’s friends for permission to “court” Ben.  Will Jim just standby and watch someone else snatch Ben away?