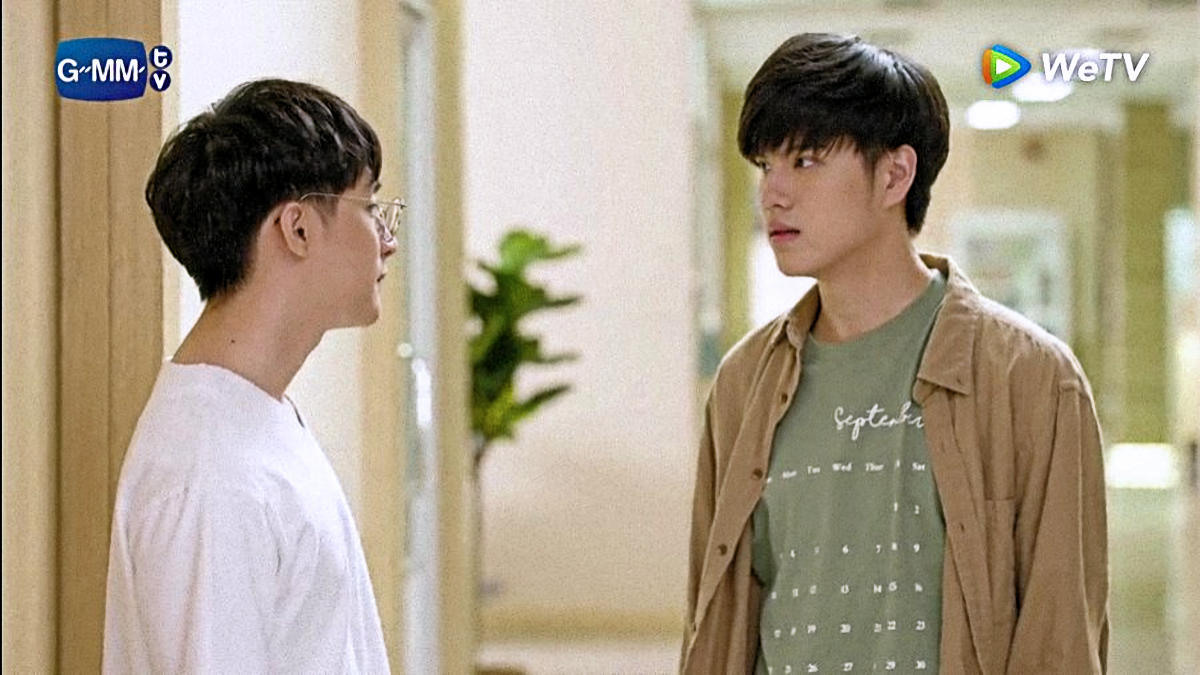 At the end of episode 3, I wondered how exactly a person who loved Itt, at first sight, does not believe in Love anymore? I found myself lacking interest in the lead story, even with all the hooks. I return to this show for the second couple in the hope of finding more reasons to appreciate this show.  I am glad I did.

First thing first, Thai BL rarely uses female characters for any purpose other than being the cause of the fights between the lead boys. My Gear and Your Gown does the same, though a little different. Itt’s girlfriend did not act the possessive girlfriend as I feared, but instead, she tried to jump ships from Itt to Pai when Itt hits rock bottom after his mother’s death. At least can’t really complain that they found a new excuse?

Apart from this one plot that bothered me, I found episodes 4 to 6 so much better than the earlier three. Itt and Pai went through many highs and lows in their friendship, but finally, they sailed through the troubled times together. Be it Itt’s mother’s death, his decision to quit school and start working, or his anger at his girlfriend, Pai bore it all and did so good by sticking to Itt and ensuring he works towards his goal to join the engineering college. However, I will not say there is much character growth or a consistent move forward to something new and interesting.

During this time, Itt also realized his feelings, and even if he was difficult, he did appreciate having Pai’s support, and I found his admission of those feelings a big step forward for him. There were some really good scenes of their bonding while at school, and all seemed to be going great for both.

While Itt and Pai go through the usual plotlines to grow closer to each other, the true growth and maturity were shown in the storyline for Pure & Waan. Without giving out the spoilers, I want to state that their episode was the best and my favorite so far from this show. Waan so deftly handled the conversation about Pure’s mother and Pure’s irresponsible actions that stem from anger, and Waan proved to be a really great friend. Pure too also showed his loyalty to friends and moved out from the asshole category rather quickly.

In fact, these two were responsible for making things clear between Itt and Pai when Itt was acting out. Together all four turn out to be a great gang, and I enjoyed the scene where they casually sit and talk random stuff. This enemies to friends transition was quite interesting because we have one couple as probable lovers (But when?) and the other as just friends on their own and not because of the leads.

My biggest complaint from these episodes is that the moment we think the story moves forward, there is another misunderstanding.  And once again, why is it always Itt who has to get angry and take things negatively? We are still so far from the scenes of their college life and to find why and how these two break apart and then make-up with each other? The preview for the next episode shows the entry of another character, another possible love interest for Pai [Why not? If Itt doesn’t stop being an idiot, I would gladly want Pai to move on]  Sadly, no JJ and Fiat shipping happening ever, but it’s still good to see these two in the show.

Marc and Win have found their comfort spot with each other, and it reflects in their performances. No more awkward pauses or looks and delayed responses in these episodes. Itt’s angry young man look truly worked this time. Not sure, though, how long will it keep viewers interested. Overall the show is really slow and doesn’t seem to have much happening. Once again, JJ and Fiat are the ones making the show bearable to some extent.