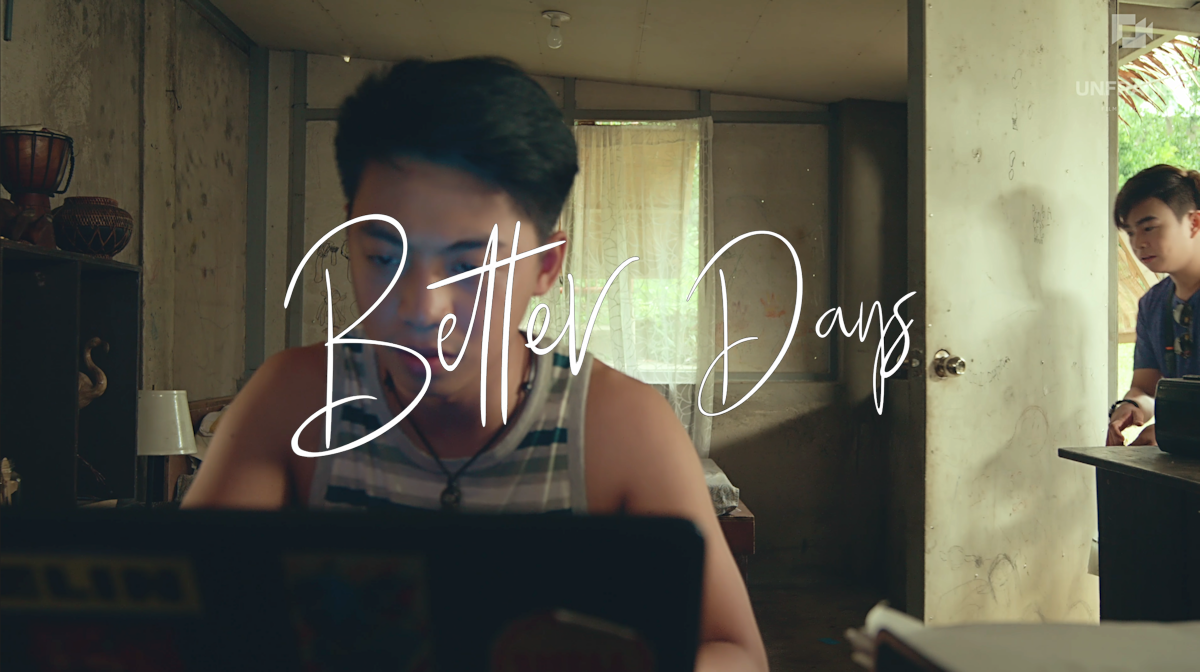 Episode 2 starts with Kian looking for Aron, who he finds deep in contemplation, applying for the scholarships. Aron hides the application from Kian, and the pair head out for a walk. During the walk, Kian attempts to shoot a video of Aron, who doesn’t like it. Kian then fakes an injury to prank Aron. Their walk ultimately leads them to a graveyard, which, after a while, Aron leaves abruptly. Kian finds Aron later on the roof, drinking, where Aron shares how both of his parents died during Kian’s absence. Aron’s admission of his feelings inadequate makes Kian swears he will never leave Aron again.

This episode is exactly what I wanted it to be. The characters do more than just talk as they engage with each other on a trip around the property. Kian is still careless with Aron’s feelings when he again pretends to hurt himself. But this time, it seemed it was directed more towards testing what Aron would do. The writers of the series truly bring the characters’ actions and intentions into the viewer’s sight with this episode. In my opinion, that is what this series needed with the first episode. In any character-driven show, having relatable human characters as opposed to ones that follow the status quo create the feeling that the director wanted us to feel all along.

Six episodes to tell a story can be a challenge for any director and screenwriter, but it also falls on the actors to do justice to the script. This time Benedix and Cheshter are given a larger range of emotions, and the pair does full justice to the thought-provoking script. Instead of standing around a home, the pair are given different settings, each evoking a wide range of feelings and you can see the attention to detail. In the first episode, everything was pristine to the point of feeling superficially neat and clean. But as Kian awakens alone in the vacation home, he instantly wanders off in search of Aron. As he leaves the beautiful home and moves beyond it things become dingy, broken windows, darker tones on wood, and walls left by age and lack of care. The small shack that doubled as a home for Aron, shows the difference in their position.

The clean, beautiful home is for families who vacationed there and Aron’s shack is for servants which Aron is. The meaning stuck with me as I remember that Aron’s family has always been in this place and to him, it might feel like a prison. Kian enters as Aron is looking at the scholarships Kian mentioned in quiet contemplation. He has the grades so there is no reason he shouldn’t be able to get one and leave this life besides it is all he ever knew. His silence in the scene and how fast he shuts the laptop display Aron’s fears at being discovered. Kian of course has no tact and ignores Aron’s mention of having made him breakfast, and looks around as if he was invited to the shack.

I wonder if Kian is really as oblivious as he seems, as he wanders in the shack, unaffected by Aron changing. He then notices the painting he had started ten years ago standing in his home, But not the significance of its presence there. Cheshter plays Kian as a visitor to all this and that he does it well, keeping Kian detached from the real intimacy or the crush that Aron has on him, for a long time. The pair go to the coconut farm and along the way Kian is up to no good per usual trying to catch Aron on video. Aron expresses how much he doesn’t want to be filmed before lightly shoving Kian away. This causes Kian to fall and Kian pranks a concerned Aron. Aron is annoyed but not angry as he attempts to walk off only to be pranked again by Kian. This scene is very cute and probably, one-sided love from Kian’s lack of attention to Aron. The pair play together beneath the coconut trees and by this point Aron allows himself to be filmed playing as the Monkey among the trees. He’s having fun and Kian is as well. It’s a genuinely sweet moment for both the characters.

The mood turns somber as the boys enter a graveyard. Aron looks apprehensive but Kian doesn’t notice and declares he wants to see the whole thing. Together they explore until they come to three cement squares, It takes Kian a moment to realize where he is, but by this point, Aron takes the offerings to the dead and puts one for each of his parents. A silent Kian watches until Aron leaves him behind and walks back alone.

In the final scene, at the vacation home, Benedix shines in this unguarded scene of Aron mourning the loss of his parents. He explains to Kian that his mother died of illness and he jumped from the very place he is sitting. The feelings of sadness hang around Aron as he stares out into the night. The feeling that his surroundings are more of a net Aron is trapped in, left an impression on me, and it shows the potential of the series. If they continue to use the surroundings and lighting as well as they did in the last scene of this episode, it will be a powerful watch. At last, Kian acts humanely, as he comes to stand beside Aron and promises that he will not leave him again. Drunk or sober, his one desire is to see Aron’s dreams of having a restaurant come true. This, I feel,  will be the true purpose of Kian’s character as they stood together, that bold promise hanging between them like the red thread binding the two, at the end of the episode.

I was surprised by the improvement from the first episode to this one. In the first, the two characters seem to simply talk to each other as opposed to the next. In this episode, the two reacted more, listened well, and spoke to one another and at times I could see chemistry building between the two. Despite the show being mainly from Kian’s perspective, learning more about Aron was a lot more interesting. Benedix plays him as a responsible happy person, so to see the amount of emotional weight his character carries, hit very hard. I’m now truly interested to see where this story goes and how the two leads complement each other better.