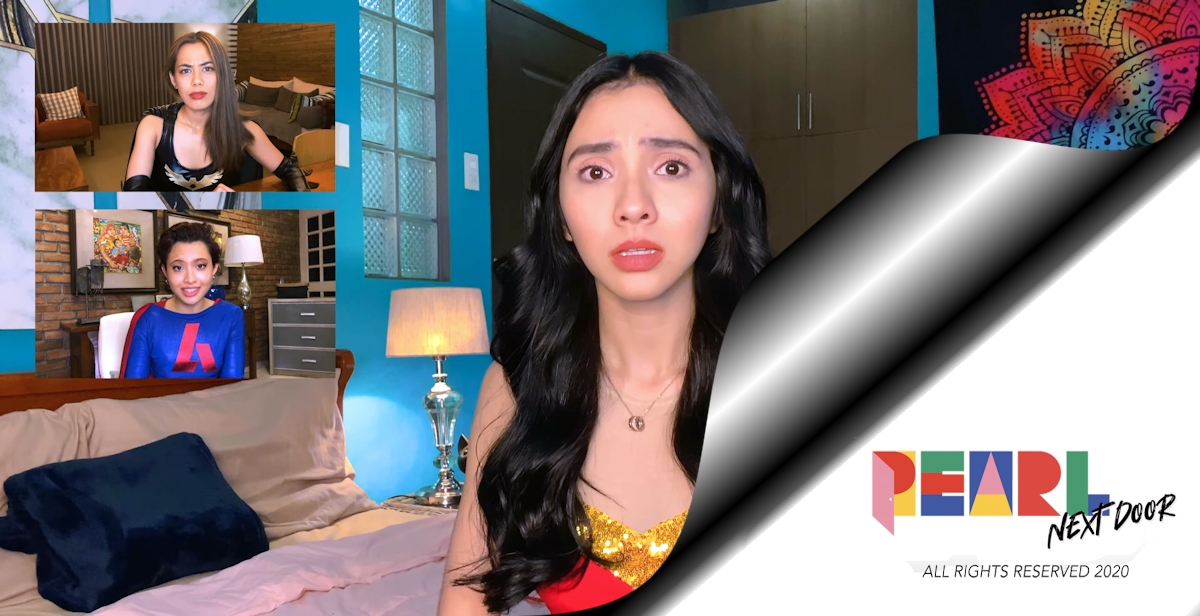 If you look up the definition of the word “awkward,” it wouldn’t surprise me if it included the opening sequence of Pearl Next Door Episode 3. A confession, avoidance, and a semi-rejection all in the first minutes set the stage for a roller coaster episode full of indecision.

My love for Alex Aguirre has not waned, and her confident, unapologetic confession at the beginning of this episode certainly did not disappoint. I love that Alex doesn’t need validation for her feelings. She doesn’t need Pearl to return her love. She simply needs release. Holding feelings back can be just as exhausting as holding them close to you. Confessing to Pearl allowed Alex to hand her feelings to the universe no matter what doing so may bring. This act takes courage.

I admit I wasn’t very happy with Pearl’s decision to use Alex Aguirre in the last episode to incite Karleen’s jealousy. I understood where Pearl was coming from and her desperation to get Karleen’s attention, but I hurt for an unsuspecting Alex. That said, the three-way video chat certainly had the effect Pearl hoped it would. From the way Karleen reacts in a one-on-one conversation with Pearl following Alex’s confession, it’s obvious Karleen harbors feelings for Pearl she hasn’t allowed herself to admit. Regretful things are said, and the conversation ends with a hurt Pearl and an apologetic Karleen.

The troops have come to save the day …well, Pearl’s feelings anyway. In a blast of fresh, nostalgic air, Gameboys’ Gav and Cai appear. The trio’s steady, unwavering friendship provides a nice respite from Pearl’s confusion through which she is navigating. Pearl was a voice of reason during the ups and downs of Gav and Cai’s relationship in Gameboys, and these boys have come to return the favor. Although, just like viewers, Caireel is divided on who they believe would be right for Pearl.

“I even used Alex to make Karleen jealous. And after everything, it doesn’t feel good. It’s not me! It’s not something I would do. I like her so much that I’m losing my sense of right and wrong – I hate it.”

Love is often blind, desperate, and unkind. Love isn’t always sunshine and rainbows, and it can change a person as much for the worse as it can for the better. I like that Pearl admits to Gav and Cai that she didn’t make the best decision by instigating the three-way video call. She realizes she made a mistake. Pearl also realizes that she changed who she is in an attempt to gain what she is afraid she can never have. She is human, and humans are hardwired to mess up on occasion.

There is something therapeutic about yelling when frustrated, whether it’s yelling into a pillow, at someone else, inside our own heads, or the edge of a cliff to an open sky. A Pandemic doesn’t change that, which is why I was completely amused and appreciative of Pearl’s virtual “places to shout” moment with Fonzy. The release felt good to both Pearl and the viewers because the frustration is real. At this point in the series, there is an obvious team divide. Are you for ‘Team Alex’ or ‘Team Karleen?’

In particular, one thing stood out for me during Pearl’s talks with Gav, Cai, and Fonzy. During both conversations, there is an apparent distrust in Alex Aguirre. Whether the show’s writers are foreshadowing something that happens later or are simply dividing the ‘Team Alex’ and ‘Team Karleen’ playing field, I was a little saddened by this. Why does everyone assume Alex has ulterior motives simply because she is honest about her feelings? I like that Alex is forthright with no expectations. It’s a breath of fresh air and something we don’t see as often in dramas. No matter who Pearl chooses to be with in the end, I hope Alex remains a character that inspires openness rather than secretive hate. I hope she isn’t transformed into an antagonist. Think about it – the LGBTQ+ community could use more self-aware, self-confident, and open characters who know what they want without being deceptive. However, the “distrust” dialogue has me more than a little worried this may not be the case.

Let’s talk about Karleen. Like with the previous episode, I feel like Karleen is probably instigating many mixed emotions among viewers. The show cuts to Karleen in a video chat with her best friend, Jill. She’s helping Jill plan a wedding, and we discover through the exchange that Karleen has definitely been hurt in the past by people who were unsure about their sexuality. I like that we got this deeper look into Karleen’s past. Her feelings about being hurt are valid, and it makes sense that she has built a defensive wall around her heart. However, I feel like the show should have used a better example of this pain rather than Karleen’s past relationship with Jill, who also appears to be one of Karleen’s ex’s. Karleen mentions three past relationship incidents, but the only one explored is her breakup with her best friend.

In a candid moment, Karleen tells her friend, “When you had to choose, you chose Kev because it was just easier. Men are always the easier choice.”

I understand why Karleen says this. To be honest, for someone in the LGBTQ+ community who has to face discrimination because of their same-sex relationship, these feelings are real and are valid. However, as a bisexual female currently married to a man, I also understood why many bisexual communities might also find this offensive. There are certainly cases where a bisexual female may choose a male partner because it seems the easier, less judged option. Most of the time, however, choosing who we love isn’t based on gender. It is based on with whom we fall in love.

Karleen’s friend calls her out on this by saying, “I object! I chose Kev because we were already done. I was into men and women way before we started, and you knew that. And I didn’t discover I like guys because of you. I can only speak for myself, but you were definitely not in a phase. You were not an experiment.”

From this objection, it is made clear that the relationship between Karleen and Jill had already ended before Jill started a relationship with her fiancé. It is also made clear that Jill had accepted and was comfortable with her bisexuality while dating Karleen. There was no hidden agenda or seriously hurt feelings, which is obvious based on the fact that Karleen and Jill are now best friends.

Because of Jill’s remark, Karleen’s statements came across more like an attack rather than a reason to be understood. Hence why I feel like one of Karleen’s other past relationships may have played a more vital role in understanding who she is as a person. Instead, viewers are left in the same position they were in Episode 2. They are left wondering what could have happened to Karleen that was traumatic enough to cause her to shut herself off. I’d be interested to see a more in-depth look at Karleen’s past and experiences because even though I have an obvious soft spot for Alex, it is apparent that the connection between Karleen and Pearl is much deeper and emotionally complex than the connection between Pearl and Alex.

Pearl makes another vlog, and while I love the vlogs she creates because they are quirky, fun, full of personality, and personal, I feel like this show should find a creative way to transition into the vlog cuts back on some of the intro. After three episodes of the vlog’s introduction, I found myself skipping over it to get to the actual vlog itself.

Pearl reads a letter from a fan who is going through the same predicament she is during the vlog. This scene is a beautiful moment simply because although Pearl herself is confused, she is truly great at giving thoughtful advice.

In response to the email, she says, “When you devote your time, energy, and feelings to the one who can’t seem to reciprocate them, you get to know yourself better. You get to know how selfless you can be, without expecting anything in return. When you give the one who likes you a chance, you get to see yourself in a new light.”

It is humbling and enlightening to fall in love with someone who doesn’t love you back. It is also humbling and eye-opening to be the person who is loved when you don’t return the feelings. Pearl is currently in both places: the object of someone’s affection and another’s rejection. I feel like we’ve all been in these two places at some point in our lives, and I like that this show manages to express what it feels like to be both loved and rejected in a single episode.

Pearl’s conflict grows even more complex. She decides to give Alex a chance, and we get a montage of fun, virtual moments between them. However, when Alex suddenly mentions the possibility of one of these instances being a first date, Pearl freezes up. The feelings she has for Karleen are still present, still strong, and still, make her conflicted. This moment is the first time we can see a small crack in Alex’s confidence. Noting Pearl’s discomfort, Alex asks if Pearl could give her a chance. To some, I feel like this moment may have come across as pushy, but I didn’t find this to be the case. Because the show explores Alex and Pearl’s recent relationship in a quick montage, we know there has been a time jump. I think this is a time management decision by production, but it takes away from the depth that Alex and Pearl’s relationship should have at this point. Therefore, for me, it felt more like Alex was asking Pearl to re-evaluate her feelings after their recent moments together rather than a push to be Pearl’s ultimate choice.

Pearl is comfortable with Alex, but her exchange with Alex doesn’t have the same “suffering” feel Pearl’s exchanges with Karleen do. From Alex’s singing confession to how she watches Pearl sleep, it is apparent how Alex feels. On the other hand, Pearl maintains a distance that can be felt, a distance Pearl didn’t maintain when having late-night conversations with Karleen.

The episode ends with Karleen calling while Pearl is still chatting with Alex. Pearl immediately takes the call, which is proof her feelings for Karleen still run deep.

“Please tell me I’m not too late?” Karleen says.

Although this is not an outright confession, there is a definite, tentative need to explore feelings that have been ignored.

My feelings about Pearl Next Door remain the same. For a short spin-off series, I feel like it is navigating itself well. I feel like some of what this show is trying to convey needs more focus and time, but all in all, I like that it opens an avenue for discussion while also having all the fun moments a viewer expects from Pearl.

I hope the final two episodes shed a more personal light on Karleen and her past.