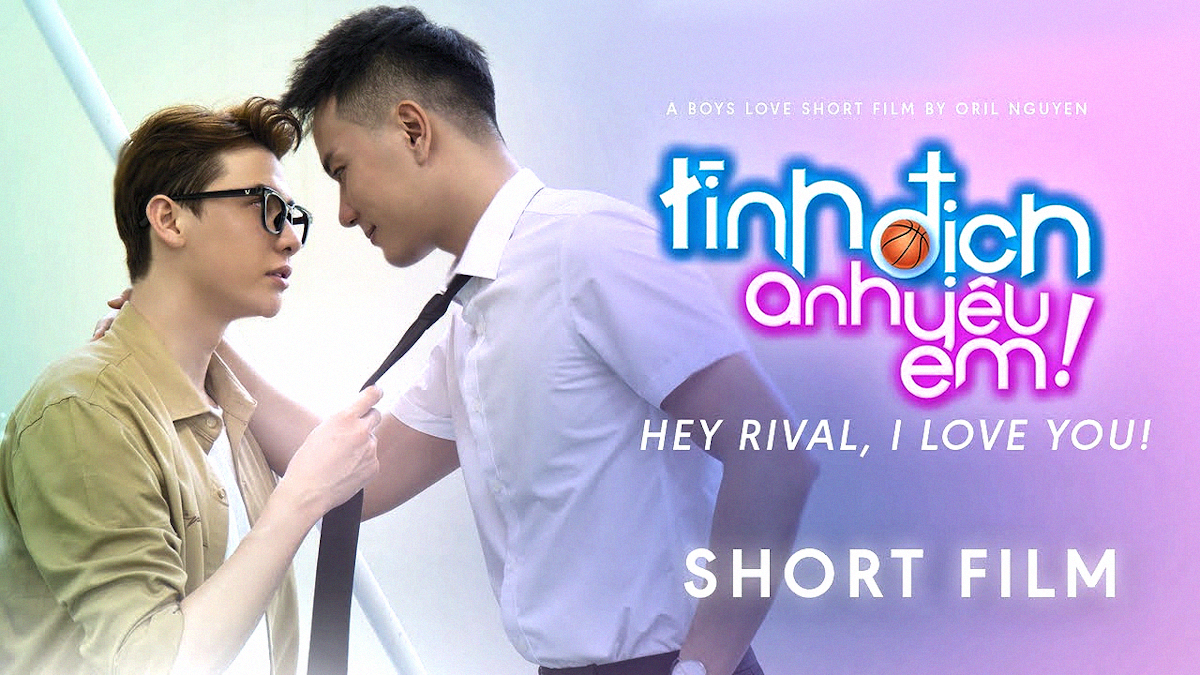 The story of boy meets boy gets an interesting twist with the Vietnamese short film “Hey Rival, I Love You.” Two attractive men meet by chance as they discover the two are dating the same girl. Deciding to expose her deception puts them in each other’s lives. Once aware of one another, an unlikely friendship grows, cultivated by a shared desire to destroy the girl’s public image. But over time, one of them loses his nerve as he begins to experience confusing feelings. Forced to face the reality of their situation, the boy takes a risk that could be good for them or tear them apart.

This short stars Bá Đô Hoàng as Duong, a handsome college basketball player, with Duy Lâm playing Phuc, a handsome and rich college elite with the best grades. Their roles come from the hit romantic comedy “Monster In Law” as this is a prequel short film. The company that made the film and show has said a sequel will be made based on whether this one’s a success.

The cinematography of this short film is wonderfully shot with high-definition visuals.  I enjoyed using color to highlight where I should be looking as it often felt the actors were styled to contrast with the scenery.  It was a clever way to grab my attention and keep it. The music was another welcome surprise as much of it was tailored for the scenes using electric guitars and beautiful synth scores to bring out the most drama.  As the short film changed the paths in the story, the music followed suit.  Combined with the dynamic visuals, the film was a flawless hit to me.

I love it when you can tell the people involved in making the feature care about the work. Utilizing each shot to focus on the atmosphere changes as Phuc and Du(Duong) meet, fight, get to know one another in just thirty minutes, could not have been easy. However, the production staff achieves it very well as the short film moves over a short amount of days, telling the story of two loves’ end, as one begins out of the ashes of it.

As more and more BLs come out, it will get harder to create something new and original, but somehow this short film does it with ease. Taking cues from many sources, from anime to recent television shows, you can feel the impressions they make in the script. Every time I thought I knew where the story was going, it took a turn in a different direction, which I admired greatly. A large part of this comes from how the characters are portrayed and the situations they’re in. Du begins the film as a shy young man who has been courting Chau, a curvy, beautiful woman, for weeks. Finally getting his shot with her, but we see different layers to his character as the film progresses. It’s how the film presents a surface impression and then dives into it, which gives it that charm that sets it apart.

Even Chau, the girl who is playing with men’s hearts like toys, is given depth to her character and even has a fair amount of screen time. Of course, most of it is superficial as she is manipulating two men. But it’s there, and that’s what matters. In BLs, the girl is often there in passing for the two men to fall in love. But as she shows more of herself here, it becomes clear she is fully aware of what she is doing and why. She isn’t the iceberg from “Titanic” passing by after wrecking everything.

Phuc’s aristocratic way of living shows without much telling needed as the film highlights his life in small moments. He is the cold Seme with his haughty attitude, overbearing nature, and ability to assume control of circumstances. It’s a delight when he tries that tact with Du, and Du turns the tables on him in a scene that crackles with homoerotic undertones.

“Hey Rival, I Love You” is exactly what it should be. A cupcake of a film that skirts the line of being preachy without being annoying. It offers more than the fish kiss horror many have come to expect from BLs while not going full Skinship. With an interesting plot driving it to a well-executed conclusion. This film delivers, and I hope it creates enough buzz to give me that second season as I look around for the first.