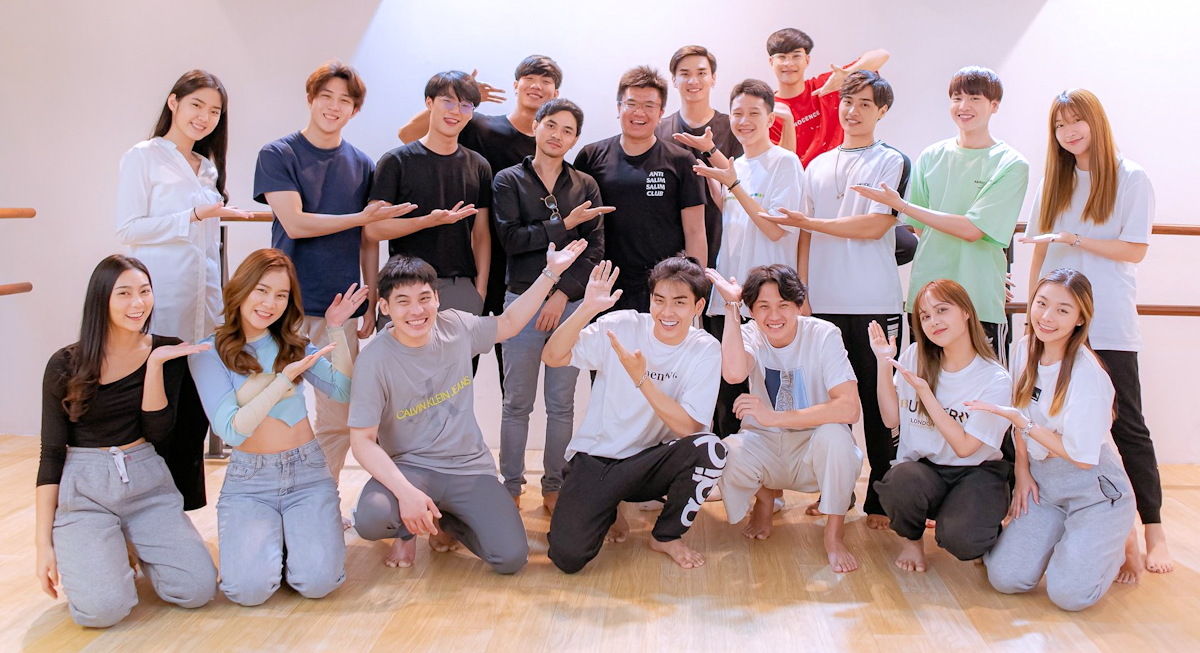 UPDATED: The Psychomilk/LWG YouTube page has just posted our interview with the cast of “Secret Admirer”, including our beloved Earth.

Adapted from popular Thai BL Author Jamie’s successful novel “Secret Admirer,” this show certainly drew mass attention because of its enormous star cast. Loyal fans followed the auditions like a hawk and waited with bated breath for news related to the actors selected for the main roles. The project is helmed by the prolific, talented Director Aam Anusorn Soisa-ngim, who brought us “2Moons2” and the “Present Perfect” series of films. This adaptation follows the story of a shy Junior who secretly loves his Senior but does not have the courage to reveal his true feelings.

Does this premise remind you of another popular Thai BL drama, “2Moons the Series”? It certainly manages to jog your memories and draw inevitable comparisons. The anticipation surrounding the reveal of the cast was unprecedented. Boyy Entertainment (the Production House) managed to turn the tide in their favor as the grand reveal shocked audiences. Returning to the world of Boys Love, Earth Teerapat (beloved Main Lead in 2Moons2) makes a return with “Secret Admirer the Series.” Since the ill-fated contract with his old management (Motive Village) ended last year, the talented actor is finally free to make his own choices. The news was met with great fanfare and excitement, as Earth’s official fandom “Earthlings” expressed happiness and gratitude. And considering the unprofessional and profoundly discourteous way Motive Village treated Earth, P’Aam, and most of the other Moons stars), it’s also a triumph for integrity and honor.

Director P’Aam also managed to keep everyone on edge, as he baited the audience until the last moment with details related to the project. While everyone thought that Earth might be playing a Supporting Role, P’Aam shocked the masses with the news that Earth was instead portraying the main lead Kimhan. Apart from Earth, “What the Duck Series” star Art Pakpoom is making a comeback with this show.

Psychomilk had an opportunity to interview the novel’s Author Jamie, who was gracious enough to help us draw a character sketch of the main leads.

Psychomilk favorite Earth Teerapat will portray Kimhan. Jamie describes Worrapat or Kimhan as a good person. He is gentle, caring, sincere, attentive, optimistic, and the most important thing, he is a great cook. He cooks ordinary Thai food and bakes like a pro. The food he cooks is so delicious that it was one of the main reasons that Singto fell for him (apart from their closeness as neighbors and the whole university Junior / Senior relationship)

Fluk Chatchawan will play the main lead Singto. Poramet or Singto is an introvert, yet he is also a real gentleman. Even though he is a quiet man, he is very kind. He always loves to help others. He doesn’t speak much and doesn’t know how to express himself well.

Yut Kritsadayut will be playing the character of Bom. He is a very straightforward person, almost blunt. He is stubborn, quite childish but never hesitates to speak his mind. Bom is the kind of person who always supports his friends.

Bew Sitthikarn will play Bear. He is the Head Hazer. Although he looks tough, he is really friendly and funny. He is also an extremely shy person when it comes to a person he likes. He is gay and has liked Bom from the beginning but finds it difficult to confess his feelings.

Boat Yongyut will be playing the role of Tim. He is an outgoing person who does not hesitate to try and get what he wants.

Art Pakpoom will portray Mhai. Jamie hilariously describes him as a rascal who is as annoying as Tim (I guess we have a match made in heaven).

Leoji Jirasin will play Bung with Kaprao Pongkorn portraying his love interest Ping. Jamie describes them both as funny and easygoing, and we don’t have much information about their love story at the moment.

Worrapat Rungreungwattana is just an ordinary guy who lives an ordinary life. However, his heart is taken by a Senior for whom he has secretly admired since his days at University. This man is Poramet Potiwat; he is a nice young guy who speaks very little. He prefers to express his emotions via the scrutinous gaze of his eyes rather than words. Even though Poramet is a quiet man, he likes to help others and is very kind.

Worrapat had recently moved to the house next door to Poramet just before starting his first year of University. It could be mere coincidence or fate, but not only are their homes next to one another, but the two of them also studied at the same university and in the same faculty, albeit they were in different years. However, the Senior’s kindness slowly changes the admiring gaze from the Junior next door little by little, developing it into a love that will change their relationship forever.

The show just began shooting this week of January 25th, 2021, and will probably air in the first quarter of 2021. (Editor’s Note: This seems really, really fast, and is subject to verification.) The individual fandoms are buzzing with excitement as they patiently await the premiere of this series. Earth and Art had sensual chemistry with their co-stars in their previous shows. The fans wait to see if they will recreate the magic with their new partners Fluk and Boat. In the meantime, we have some new promotional photographs and videos, which will tide you over for a bit while you wait for the show to air.

Everyone can watch this video with sub on this website
https://youtubexternalcc.netlify.app/video-player.html?videoID=agvDpopk-kA

Choose language & version, then you’ll see the subtitles on the video.
Eng & Chi is available now. More languages will be uploaded. Stay tuned.
Pls watch video on this website, because your views will be counted as YouTube views too. You can trim some parts & share it on SCM

Keep watching this space as we bring you more updates related to this upcoming Thai BL!