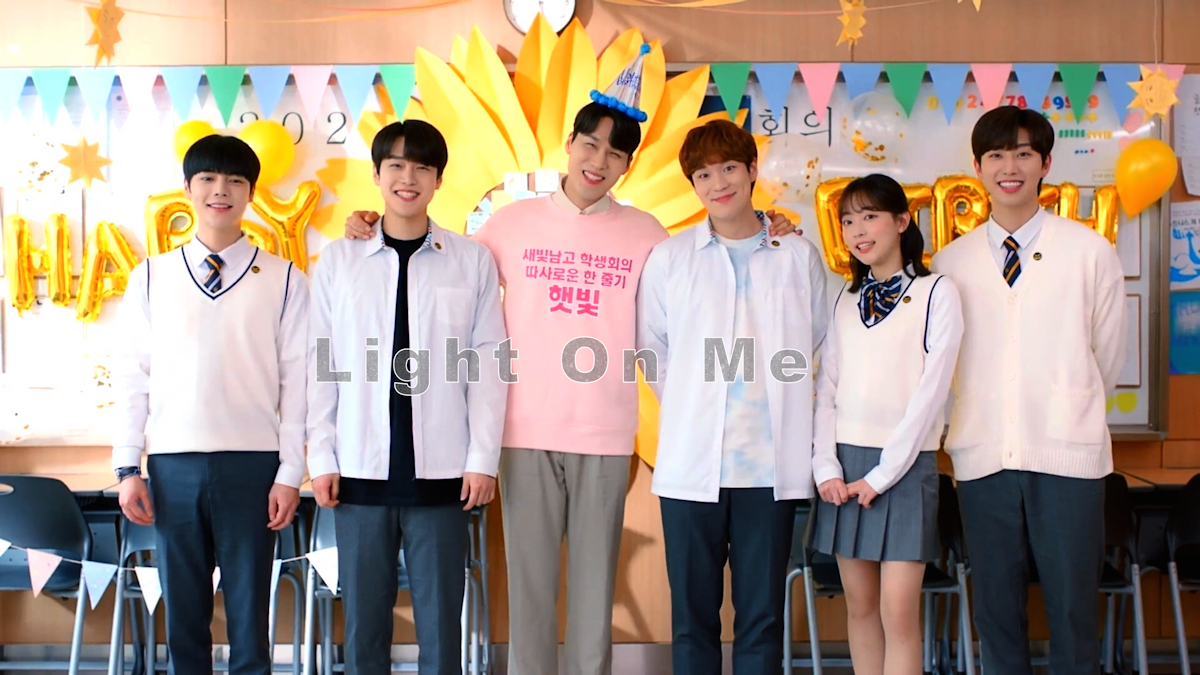 Light On Me is a Korean BL adapted from the mobile game “Saebit Boys High School Council” (새빛남고학생회) by Day7 (데이세븐). Lee Yoo Yeon directs, and it’s currently available on VIKI tv. This series is a coming-of-age tale and one of self-discovery. It is a BL, but it’s also much more than that. The show has sixteen episodes, and has over six and a half hours of running time. Because of this, the character development is very well fleshed out, which so far the best of any Korean BL series, with the story pacing just right to tell the story of navigating friendships, love, societal pressures, and parental woes. The simple plotline might seem trite for some people, but for me, it made the story more genuine. Life isn’t always flash with little substance. Sometimes it’s the exact opposite with lots of substance and little flash.

Tae Kyung is an 11th Grade high school student. He’s also a lifelong loner but one day decides he wants to change that status. The problem is, he has no idea how to start going about making new friends. His homeroom teacher advises him to join the school’s student council, but making friends may be more challenging than it seems.

He meets the Vice President of the council, Shin Woo, who is level-headed but very cold toward him and reluctant to accept Tae Kyung. However, he also meets the super-attractive President of the council: Da On, who appears to take an instant shine to him. The beginnings of a romance appear to be in the cards for Da On and Tae Kyung, but Shin Woo does not seem to approve. Matters are further complicated because Da On’s close female friend – who secretly loves Da On – is jealous of their closeness and attempts to drive a wedge between them!

He is a loner who doesn’t mind being alone. Until one day, he begins to question his decisions and tries to change.

He could be your classic tsundere character, gruff and grumpy on the outside but with a soft, caring side that is carefully shown to only a few.

His smile puts everyone at ease. He’s always helpful, agreeable, approachable, and he is a nice guy.

This lighthearted guy always makes others laugh. He’s surprisingly astute and a great friend among the friends.

She is the girl with the mega crush on Mr. Nice Guy. She boldly proclaims upon meeting Woo Tae Kyung that she has liked Shin Da On for three years while standing in front of the student council.

This teacher heads the student council and provides a sounding board to all the boys. He takes the time to respond to each member with thoughtful advice and insight to help them navigate the tricky waters of growing up.

We start with Woo Tae Kyung, a quiet and delicate-looking boy in high school. Woo Tae Kyung is on his way to school when he’s greeted outside by Le Ki Hyun, his new teacher. He asks about Woo Tae Kyung’s friends and questions why he is walking alone. Woo Tae Kyung has no friends and doesn’t need them. No sadness or regret in his voice. He states facts. He continues on his way, leaving a stunned teacher behind.

Woo Tae Kyung is a loner surrounded by small clusters of boys. He seems unaffected by this, content to stand apart from these groups. Two boys walking behind him are discussing Woo Tae Kyung’s lack of friends. Woo Tae Kyung asks the boys if they were discussing him, and if so, could they do it louder so he could hear them. I chuckled at this. He is no mouse. When one boy apologizes for his friend’s rude behavior, Tae Kyung asks a genuine question. “Why should you apologize for him? He can speak.” The boys snap back at Woo Tae Kyung with an expletive, saying “He’s my friend!” and this attitude is why Tae Kyung has no friends.

Excuse me while I refer to my life experience. My mind immediately recognized in Tae Kyung all the classic signs of an “Aspie” or someone with Asperger Syndrome. Someone who has Asperger Syndrome doesn’t discern and act on social cues very well. Often they speak bluntly, with an honesty that provides no filter for their words. They don’t have many friends, nor do they make friends easily. They usually appear more mature, set apart from others their age. I see these traits in Tae Kyung in the first ten minutes of the Light On Me, so I recognize them quickly. As my Son’s Therapist once said to him, ‘there is nothing wrong with your brain. You are just hard-wired to perceive things differently.’ Usually, people with this disorder shine in other areas, like art, academics, science, logic, or technology.

As Tae Kyung enters the building, he overhears two classmates discussing an assignment that is due on their first day back. He inquires, only to find out there is a group chat of which he is not a member. One of the boys graciously adds Tae Kyung quickly to the group as they hurry towards class. This incident begins Woo Tae Kyung’s awakening.

He begins to look around at others, feeling differently about being separate from them. He realizes maybe he doesn’t want to be alone. After class, he consults with his new teacher Seo Haet Bit, who has a suggestion for him. Perhaps if Woo Tae Kyung tries to make friends, it might turn out better than he expects.

On his way back to class, he is preoccupied and bumps into a boy holding a box. Some sex toys fall out of the box, and Tae Kyung tries to help the boy recover them. He trips over his own feet with one in his hand and ends up poking the ass of the other boy with the dildo….😂😂 Noh Shin Woo, the boy carrying the box, reacts angrily, assuming Woo Tae Kyung is teasing him. Unfortunately, being who he is, Tae Kyung doesn’t realize and continues to embarrass the boy by asking if his butt is ok because he poked him so hard. 😂😂

Fast forward to his afternoon discussion with Mr. Seo Haet Bit. The teacher suggests he make friends with members of the Saebit Boys High School Council – three popular boys who are kind and likable.

Shin Da On and Nam Goong Shi Woon immediately accept Woo Tae Kyung, taking him under their wing and inviting him into the Student Council. The vote to acknowledge him as a new member relies on a person Woo Tae Kyung hasn’t met. In walks Noh Shin Woo and the two immediately recognize each other. Noh Shin Woo instantly displays a dislike for Woo Tae Kyung, who doesn’t understand the other boy’s animosity at all.

Also, we meet Lee So Hee, a girl from a nearby school, who boldly proclaims her three-year crush on Shin Da On to Woo Tae Kyung. No one is surprised by this statement but him. He admires her boldness.

After this initial meeting, Woo Tae Kyung decides to win over the last student council member by being helpful and cleaning the room every day before school. He puts all his effort into trying to join this group. He’s determined to become their co-worker and friend.

At this point, he starts to observe each boy’s traits from the view of an outsider. He realizes quickly that Shin Da On treats everyone the same, with kindness and sincerity. When he questions Shin Da On about this, the response he receives is unexpected. Instead of denying it, Shin Da On says that he doesn’t like hurting or disappointing others or being hurt himself, so his motto is “What’s good is good.”

As the story progresses, there becomes a love quadrangle involving Woo Tae Kyung’s Noh Shin Woo, Shin Da On, and Lee So Hee. Nam Goong Shi Woon is a best friend to all and a supporting character here.

There are many issues they tackle in this drama. The students’ journey to self-discovery, finding out about who they are. They discuss sexuality and how others view them. Jealousy causes issues but at the same time provides character growth and maturity. The students also deal with family issues. However, at its core, the show is about friendship and what it means to be a true friend. It’s not only about romantic love; it’s about self-love as well. Finding yourself and learning to love yourself is a significant theme in this series.

Overall the series is enjoyable. The pacing is slow in the middle, as we writers like to call it the sagging middle. However, the pace picks up and gains momentum after a few slogging episodes. A negative for me, though a minor one, is that the show wraps things up almost too neatly for me. Given the ages of our characters, it seems out of place their transformation could happen in the two years preceding graduation. But the heartwarming conclusion will leave you smiling, and that’s really a primary goal of any show. This series stirs many emotions, like sadness, anger, frustration, joy, and laughter. It does its job well.

Light On Me is well worth the effort to watch. If you have seen it, please let me know your thoughts. Thanks for reading. – 🤗💕Jen