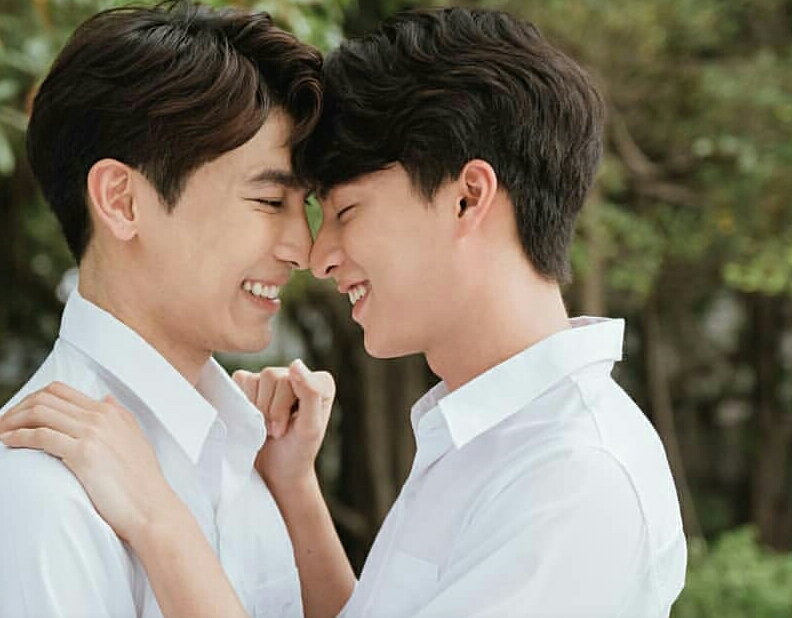 What if there’s a global video platform that can broadcast a Thai BL series now? Which series would you choose that will introduce the genre to potential BL (and/or) gay fans around the world?

I posed these questions on Twitter. Not surprisingly, it was TharnType which got the biggest share of the votes. Yet the case for the other three is as compelling, if not as convincing.

GMMtv’s He’s Coming To Me features the formidable duo of Singto Prachaya and Ohm Pawat. Not really an original BL couple – Singto was paired with Krist Perawat for the hugely popular SOTUS BL franchise, while Ohm was paired to Toey Sittiwat for Make It Right (Season 1 & 2). While the biggest attraction of this drama is on-screen chemistry, there are other equally convincing reasons why it was a hit among BL fans. The mix of ghost-mystery-romance has not been fully explored before in Thai BL. If there were previous productions, then it was not as acclaimed or we simply missed it.

In terms of seniority, Gun Atthaphan and Off Jumpol grab their latest casting coup in Theory of Love, an equally formidable candidate for Thai BL drama of the year.

A series still going through the ’emotional’ motions is Until We Meet Again, starring the youthful and sincere Fluke Pongsatorn and a cast of fresh faces. Featuring heart-wrenching music, local Thai sweets, and engaging supporting characters, UWMA encompasses pretty much all the demands of BL fans, yet it also offers something fresh and intriguing – reincarnation. Reports have it that instead of the usual 10-12 episodes, this drama will stretch for an additional 6 more episodes to make it lucky 18.

If there is a GLOBAL (not YT, pref. Subscription) video platform that can broadcast a Thai BL series, which one would you prefer to be released ASAP and recommend to potential BL and gay fans/audience?

What makes TharnType different? As a reviewer of gay films and BL drama series for years, I think of gay films as completely distinct from BL. While the theme of a young boy falling for another boy is consistent on both, the point of view is as contrasting as night and day. BL (or Yaoi, from the Japanese where it originates) is mostly based on the imagination of heterosexual girls. Gay films, on the other hand, identify with the LGBTQ community for its struggle on equal rights. It has more variety.

TharnType – in my opinion – blurs the distinction of the gays and BL authors’ opposing points of view. It is no longer strictly a straight girl’s interpretation of how two men fall in love but it reconciles what actual men feel when they are intimate.

Much of the credit goes to the author – MAME12938 – who has created a BL universe of characters that were meticulous for their imperfections. No longer are these BL boys too shiny (like dolls) or too idealistic (like fiction), but they have attitudes – they act like real boys do.

What’s the drama all about?

Mew Suppasit (who plays Tharn) is gay and newcomer Gulf Kanawut plays Type who hates gays due to a previous bad experience. They became roommates and conflict starts from the minute sexual preference was “out”. Will they hate each other or will love blooms? | read more |

Type as a perfect illustration of a conflicting character had a hard time accepting his feelings towards Tharn. But Tharn tries to offer him all the reasons why they ought to be together.

Issues like incest, bullying, and rape are staples of BL, yet it received a pronounced manly treatment from dir. Tee Sintaparadee. I guess regular BL audiences were unnerved by the series’ uncharacteristic narrative.

Here are some reactions in favor of the series:

Finally, the actors – main and support – gave intense and inspired performances that fans are clamoring for another season. And why not?