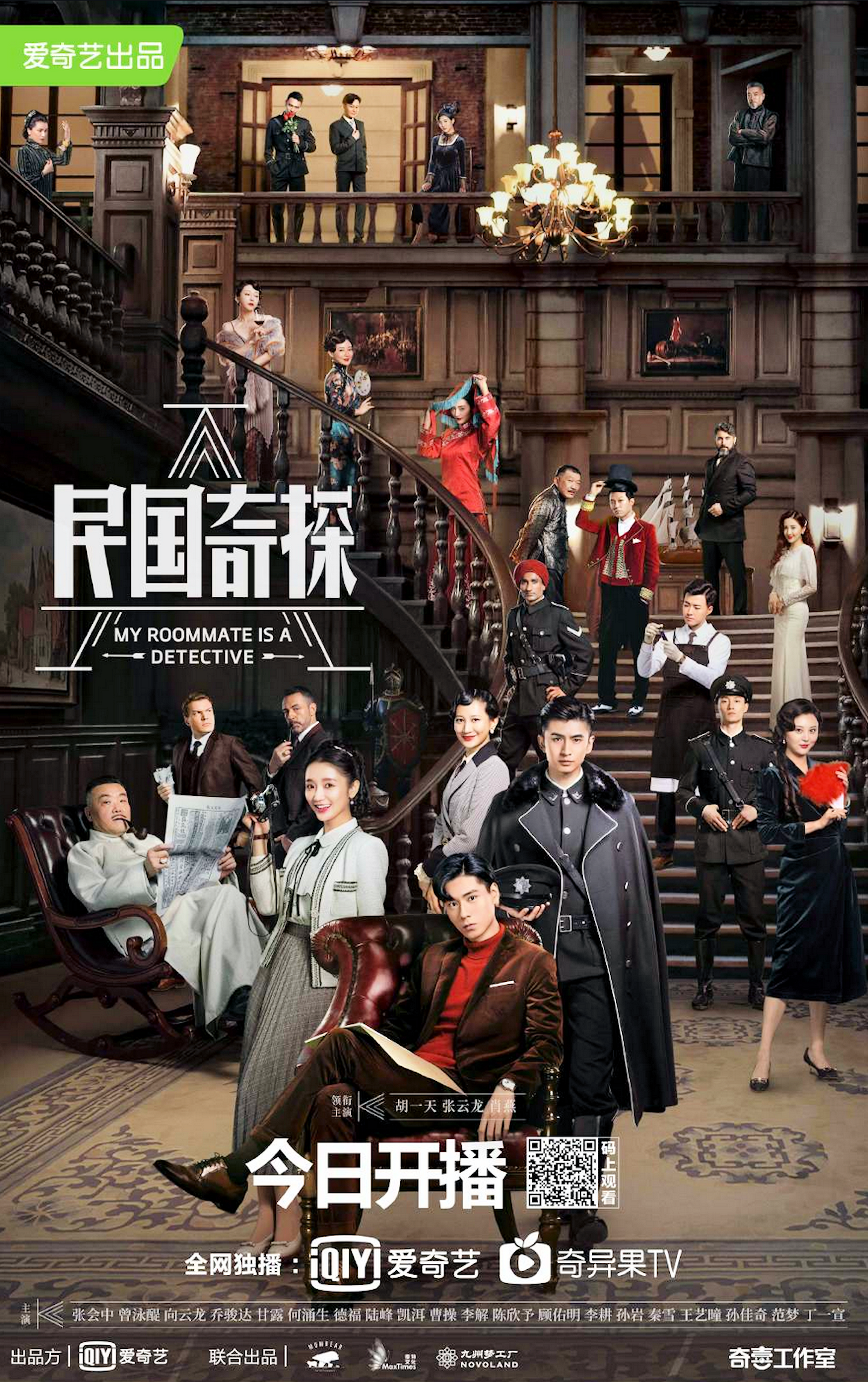 My Roommate is a Detective is an addition to BL dramas dubbed as Bromance as per the Chinese Government’s restrictions. It’s a light-hearted drama set in the mid-1920s and follows the exploits of Lu Yao, newly returned from his studies in England at Cambridge University.  Working alongside with Police Inspector Qiao Chuseng and daring reporter Bai Youning, they team up to solve unusual cases assigned to the Concession Station.

Lu Yao first meets Qiao Chuseng when Yao is arrested by the Police as a suspect in a mafia boss’s murder case. Chuseng treats Yao as a suspect at first, and then Yao impresses him with his keen deductive ability. Ultimately, they team up to solve atypical, unsolved murder cases piling up in the precinct. They are later joined by intrepid and young reporter Bai Youning.  The three of them form an impressive team working together to solve off the wall, and mysterious happenings in the city.

Lu Yao, played by Hu Yi Tian, is actually from a wealthy family, but due to a difference of opinion with his father, he moves out and lives independently – not so well. Recently returned from Cambridge University in England, where he just completed his education, he is a genius and works locally at the Bank of Sassoon. Circumstances beyond his control get him involved unknowingly in a murder case that gets him suspended from his job with the bank.

This event is followed by him being recruited by Inspector Qiao Chuseng to work as a consultant on mysterious cases plaguing the city. Lu Yao has a high IQ and remarkable powers of deduction with which he can piece together clues and accurately trace motive and suspect in each case. Lu Yao might be a genius, but he’s not immune from being gullible and openly accepts that he is, in fact, a coward who only wants to live in peace.

Qiao Chuseng, played by Leon Zhang, is a charismatic character and works as an Inspector at the Concession Police Station. He has connections with Mafia Boss Bai and is often addressed as Fourth Master, and he is skilled in martial arts. It’s because of the Mafia affiliation that none of his subordinates respect him when he joins the Police force. However, with honesty and dedication, he proves himself worthy of everyone’s respect. Being connected to the Mafia had its benefits, and often assists him in his job as Inspector. With knowledge of this connection, suspects are so naturally terrified of him, that they willingly confess to charges without much coercion. He chooses to pair up with Yao after his observations convinced him that such a move with Yao would be of great benefit to his goals of fighting crime. The pair complements each other’s abilities, and they balance out perfectly in all kinds of investigations.

Bai Youning, played by Shane Yan, is a young female reporter for a daily newspaper in the city. Youning is focused and strong-willed, independent with a strong sense of justice that keeps her clashing with her father, the infamous mafioso Boss Bai. Another premise of the show is Yao is terrible with money, so he gets behind on his rent. Seeing an opportunity, Youning cleverly convinces Yao’s landlady to let her share his apartment by passing along some cash, and as such, becomes Yao’s Roommate, much to his chagrin. This ploy is what leads to the series title. Chuseng considers Bai as his little sister, and as such, she is allowed to tag along with them to the crime scenes and ends up helping them out by providing vital clues.

Digging Romance Out of Bromance

The most problematic issue with Chinese BL is that they are marketed as Bromance due to restrictive covenants enforced by the Chinese Government. As such, the noteworthy chemistry between the pair of leads is never allowed to blossom romantically, at least not BL style, to its fullest.

With their looks alone, Hu Yi Tian and Leon Zhang have significant potential to fulfill the romantic dreams of any BL fan. This is quite evident from the pic below Zhang posted on Weibo and captioned as with “Flying to the sky with Hu Yi Tian, side by side with the Sun.”

Yao and Chuseng started off with conflict, but that did not deter them from becoming each other’s confidant as they work together to solve problems using Yao’s quick wit and Chuseng’s observational skills.

In this particular scene, Lu Yao, as usual, pesters Chuseng for repayment. But in Chinese, the pronunciation of “repay” and “hug” sounds similar, and so Chuseng embraces Yao instead. That is the moment they click, and Yao feels flustered as hell.

Lu Yao is also quite possessive, and he feels quite uncomfortable watching Chuseng flirt openly with the brothel owner to obtain leads on one of their cases. He looks ready to burn the lady down, and this gives Chuseng a lot of pleasure seeing Yao so wound up. The jealousy theme continues when they are investigating at a restaurant, and the owner goes on about Chuseng’s many girlfriends. Lu Yao immediately refutes the owner’s claims, calling himself Chuseng’s boyfriend. Damn, that smile on Chuseng’s face is a killer.

Lu Yao also has a nasty habit of always running to Chuseng when he needs money to clear his debts. Chuseng offers him money in return for Yao’s assistance in solving cases. It is the same case in this scene, but before leaving, Lu Yao comments on Chuseng’s impressive physique. Another charged moment occurs when Chuseng wipes biscuit crumbs off from Yao’s face, while simultaneously looking at Yao like he hung the moon (with strong affection). These two light my screen on fire, and I hate that this chemistry is being wasted and not being utilized with displays of physical affection.

Chuseng might act annoyed with Lu Yao, but that never stops him from giving in to whatever Lu Yao asks. You might say that Yao has Chuseng practically wrapped around his little finger. From Chuseng buying him food to clearing his debts, to giving him gifts that he shamelessly demands, Chuseng does it all. If this is masquerading as anything else but “love,” I don’t know what is. Chuseng finds Yao adorable, and Yao gets unusually jealous of any woman trying to get closer to Chuseng.

My Take on This Drama

The drama series is currently available for streaming on the iQIYI YouTube channel. The first four episodes have already been released on YT. If you have a VIKI Plus account, they’re up to Episode 18.

The story revolves around Lu Yao, who is portrayed as a self-centered and narcissistic genius from Cambridge University. His character shows considerable development as the drama progresses. After losing his job at the bank, left with no other choice to support his extravagant lifestyle, he takes up the position as Chuseng’s “consultant.” Yao is anything but lousy here and stays quite focused as he works on each case, doing his best to resolve them. Gradually over time, we realize that Yao has an overriding sense of justice, a warm heart, and would never actually let an innocent receive undeserved punishment.

On the other hand, Chuseng is a formidable presence. He plays an experienced man who came from humble beginnings and had to work his way to the top. He is loyal to his former mafia boss Bai and solves most of the cases at his insistence. However, that doesn’t mean he won’t convict the suspects that Bai favors; he has that level of dedication to his work. We can certainly see many changes in Yao as he starts working with Chuseng; they both foster a dynamic that keeps audiences thrilled.

The only unimpressive character to me is Bai Youning. She is headstrong but can be quite annoying. She speaks highly of fighting for justice but, in the very next moment, writes dubious articles for the sake of gossip to create a frenzy. She can be childish at times, but conversely, there are times comes up with vital information. I just wish the series director would properly exercise more control over the actress’ portrayal of the character’s dynamics to be more consistent.

The drama is set in the Republican era when the European imperialists were trying to colonize China to bring the country’s economy under their control. Most of the fictional cases in the show inevitably trace back to European colonists as the perpetrators. Overall, I love the way the characters’ interaction progresses. It’s interesting watching them resolve cases as well as the changing kinetics between the three of them.

I’m looking forward to learning more about Chuseng’s mysterious past, Lu Yao’s and Youning’s issues with their fathers, and watching them decipher the aspects of even more mysteries. A Must Watch Indeed.

And some additional “eye candy” because Hu Yi Tian and Leon Zhang are that hot.