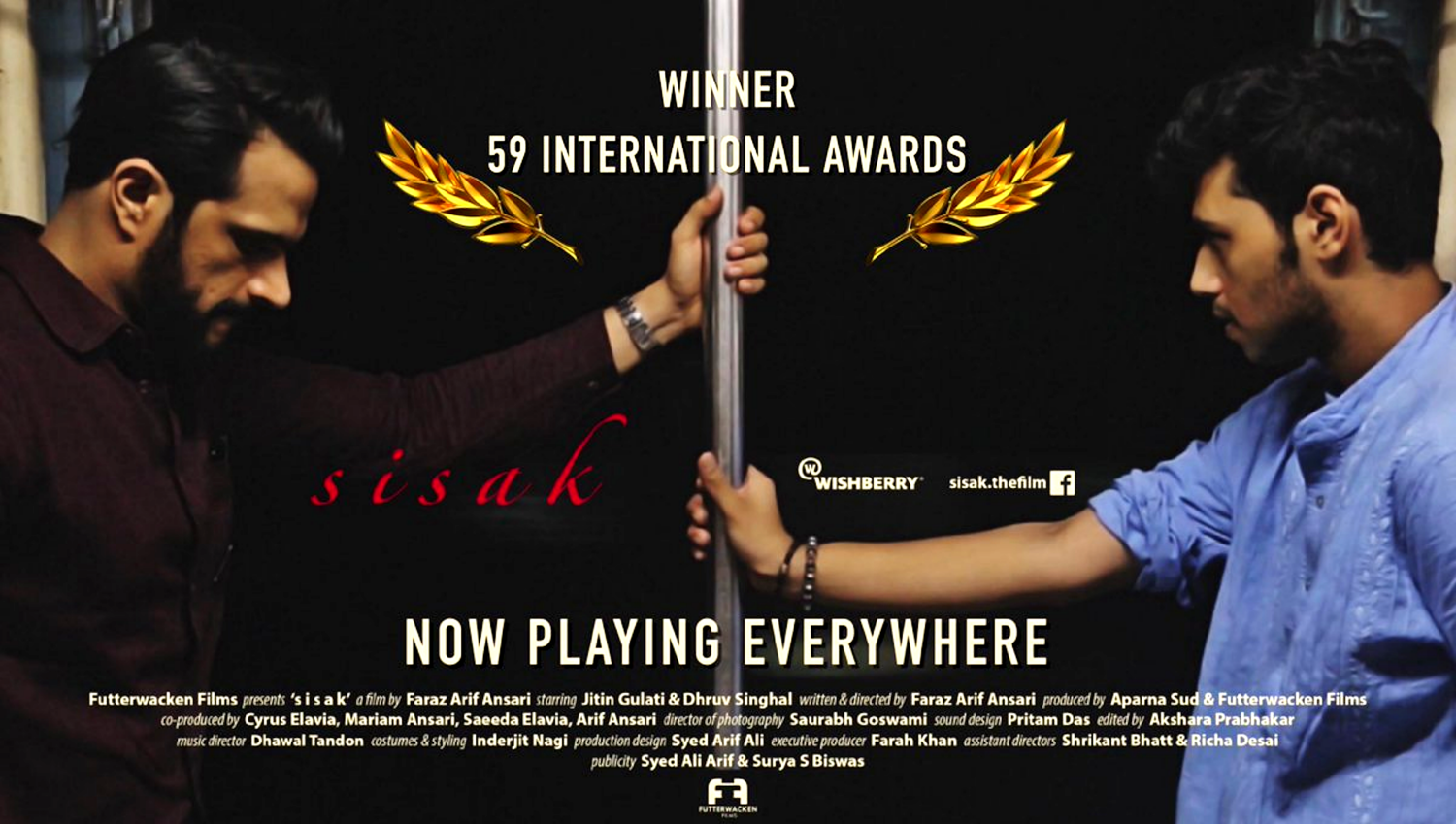 I had forgotten how important silence can be or how impactful, certain gestures can be. Just in time for PRIDE month, Sisak delivered me right into the middle of “A New World.” A world that is silently being rebuilt on hope and belief! Hoping that someday homosexuality would ‘not be taboo’ anymore, and the belief that “Everyone will have the freedom to love freely.”

This movie focuses on the general misconception and fear surrounding LGBTQ rights, in a country that finally decriminalized homosexuality after almost 71 years of its own independence from Great Britain. However, for the most part the stigma persists, and it will be a long battle before we see same-sex marital rights anywhere on the horizon.

The literal translation of Sisak from Hindi is to sob silently. This short film is a poignant representation of forbidden desires and love that is caged by taboo beliefs in an unhealthy society that refuses to give up on age-old traditions.

Director Faraz Arif Ansari takes you on an emotional journey where two men from totally different backgrounds meet and form a connection. Ansari’s use of the local trains and their operating cacophony as the background gives a whole new meaning to this film. These local trains are an integral part of fast-paced life in Mumbai.

Ansari manages to make the lead actors’ affectations as real as possible. These efforts imbue this short film with more realism. You witness the attraction, resistance as well as the fear that both of the lead characters embody as though they were living the life. This is the reality of every person who wishes to “come out of the closet” in India. The only problem is that the doors are shut too tight, and many find it difficult if not impossible to open.

The short film begins when the normal routine of a young man’s (Dhruv Singhal) day takes an unusual turn on encountering an older man (Jitin Gulati). The subtle display of the differences in social status is quite clear. The older man doesn’t seem like someone who would prefer to travel by the local trains. He clearly stands out in the crowded train, and the younger man is intrigued. It is certainly not ‘love at first sight,’ however, what follows becomes a daily exchange of long, searching glances. My favorite moment is when Dhruv’s character is sobbing silently one night on the ride. The conflict of emotions on Jitin’s older man’s face shows the character’s inherent internal struggle. He wants to console the younger man but can’t bring himself to bridge that distance.

It is quite difficult to hold the audience’s attention for 20 minutes runtime, with two characters who are complete strangers, exchange glances unknowingly, and have a silent conversation. The narrative draws on the hesitancy and fear that they both feel but are unable to neglect. The fact is local trains in Mumbai are the buzzing center of activity. The trains witness so many untold stories every day. It’s quite possible they might have witnessed similar stories unfold before. The thought itself is astounding because the amount of heartbreak and pain wrought is unendurable.

Jitin, playing the older man, is certainly not a newbie when it comes to playing complex characters. I enjoyed watching him portray the character “King Tailap” in Sony TV’s mega opus Prithvi Vallabh. To see a man who spearheaded armies into battlefields transform into a docile character having mid-life existential crisis was a welcome surprise.

The older man, who is most probably married, is quite surprised by his own attraction to a strange young man he meets on the local train. The palpable interest, followed by a slow progression of encounters on the train, is played well. You can feel his curiosity, coupled with his desire to offer solace when he sees the young man crying. However, there are innumerable societal restrictions that prevent him from helping, so all he can do is leave a book behind. Jitin’s character, the older man, represents the lot of people who have had to hide their true sexuality, get married and live a loveless life to be acknowledged by the Indian Society’s norms and traditions.

The actor Dhruv Singhal, manages to portray the apprehension of the younger man effectively. The older man catches his attention, but the uneasiness of their situation is evident. The scene where I appreciated Dhruv the most was where one day he is patiently waiting for older man to board the train. He keeps looking around, and the older man fails to board the train, or so it seems. The younger man is disappointed. However, his roving eye then finally catches the visage of his older love interest at the other end of the train cab. He immediately breaks out into a big, uninhibited smile. Though he might be able to hide it behind the book, his happiness is infectious.

Sisak faced a lot of problems in its stages of inception. The director had few resources and an even tighter budget that didn’t allow them the luxury to obtain proper permits to shoot in the local trains. Ansari’s insistence to breathe life into this script came from India’s Supreme Court reversal of the Delhi High Court’s July 2009 order, which rescinded the portion that legalized LGBTQ peoples’ status under the law. It was a stinging reversal.

That order originally decriminalized consensual homosexual acts in private by declaring as unconstitutional a part of Section 377 of India Penal Code (IPC), in 2013. With this affront to the basic human rights of LGBTQ people, Ansari wanted to reach out to the LGBTQ community. He wanted to acknowledge the major suffering caused by this backward and unjust ruling. He chose the theme of silence because he had no words to express his pain or the pain of the LGBTQ population. Hence, Sisak was conceptualized as a film with no dialog, because Faraz wanted his characters to emote feelings without words or touching.

Problems with production continued when two well-known actors, who had been slated to play the main leads, pulled out of the project. Despite all the odds, Ansari has succeeded at his level best to have beautifully sculpted this movie and has won major awards at significant international festivals. Among the many feathers in its cap include:

My Opinion On This Film

An ambitious project indeed! Writing for Psychomilk, I have been reviewing a lot of BL Dramas from different countries. Thai BL dramas and movies are open to their depictions of gay relationships. The higher ratings might be the reason for the huge popularity of these dramas, but the fact remains that people are becoming more accepting. However, some watch BL purely to fantasize. Japanese and Vietnamese dramas followed up, but they are still experimenting.

Although I’m a huge fan of Chinese BL dramas as well, the problem exists with the “Bromance” tag. It is a major disappointment when popular web novels, written with explicit and passionate love scenes between members of the same sex, are adapted (censored) and shot under severe restrictions. Chinese Government has tight control over its social media, and it’s surprising that it even allows for a clear depiction of homoerotic elements.
South Korean is slowly transitioning into BL waters as there is a huge market and even more possibilities. However, that doesn’t change the fact that actors have major fears about being categorized as “gay” if they act in a “BL Drama.”

On September 6th, 2018, the Supreme Court India issued another verdict. This time the Court unanimously ruled that Section 377 is unconstitutional as it infringes on the fundamental rights of autonomy, intimacy, and identity, thus legalizing homosexuality in India. However, that doesn’t change the major misconceptions of Indian Society that still consider homosexuality as either sin or mental deficiency. I have been reading quite a lot of new articles about parents who are slowly growing to accept their children’s sexuality. However, these are far and few between. Unless we accept that the Right to Love as a freedom entitled to everyone, not just the LGBTQ community, there will be no skirting around this issue.

With that, let me come back to this beautiful love story. Watching this story reminded me of my school and college days. You have no idea the number of love stories that prosper on the local buses or the trains in India. Most of them are hesitant or distant. Some take ages to confess their feelings because they are afraid of rejection. Sisak played on these emotions, which are the major part of most relationships. The only difference being that the love interests may sadly never confess, being clearly afraid of the societal norms. Also, the hesitancy might breed from the fact that the older man is most likely married.

The cinematic experience is appealing. It might not be a superstar vehicle or have a huge budget. Still, Ansari manages to stitch together different scenes, with a jarring set of sounds that make Sisak realistic and entirely honest. This film is certainly close to his heart, and it shows in every frame.

I’m hoping that the market will sustain more futuristic dramas and movies like Sisak in India. India is a multicultural land, with varied lifestyles and languages. Imagine the expansive amount of untold stories and the scope they would cover. The recent success of “Shubh Mangal Zyada Savdhan” (a 2020 Indian Hindi-language romantic comedy film written and directed by Hitesh Kewalya) has surely opened the gates, but how many directors will dare to touch such a sensitive topic? The answer to this question would be an eye-opening and bring forth great changes soon. Here’s hoping that the Indian Cinematic Industry soon opens its doors to LGBTQ driven subjects and that they find a strong voice.