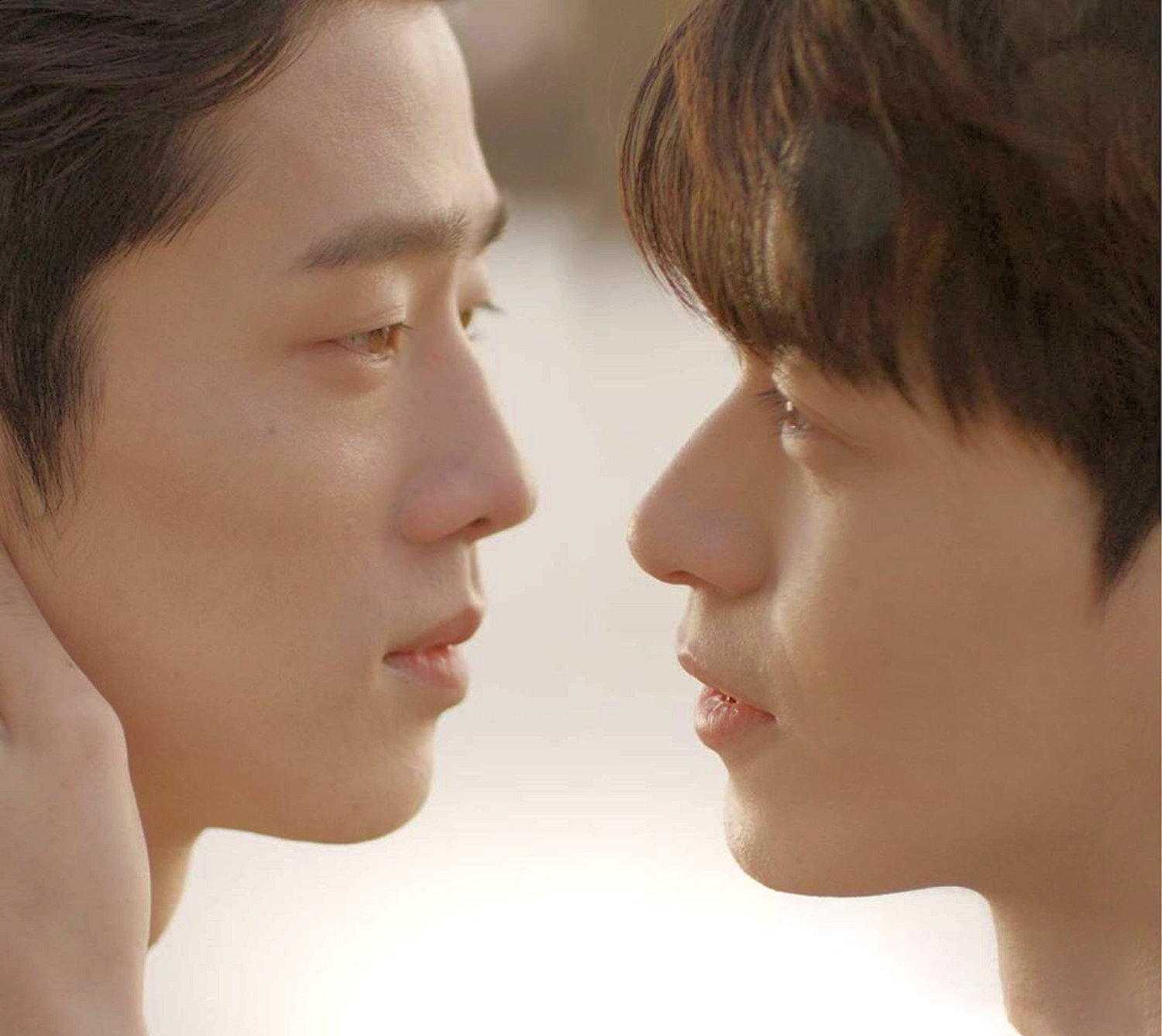 When news of this Korean love saga broke out, it was mostly seen as an experiment. Fans rejoiced, but they were largely apprehensive about the end result. Would the conservative Korean Society that is so homophobic set aside the rules for this mini-series? The answer is loud and clear! “Where Your Eyes Linger” delivered the perfect ending that even GMMtv’s uber-popular sitcom 2gether The Series failed to do.

The hugely successful drama series bent the rules to give its main lead characters Han Tae Joo and Kang Gook “the freedom to love and express their feelings.” Episode 5 and 6 gave us an important glimpse into the turmoil that Tae Joo and Gook face. While Tae Joo is growing more accepting of his feelings, Gook is nervous and still apprehensive of their social stature. Let’s review to find how they wind up together to begin their new journey!

Accepting the fact that he has strong feelings for Tae Joo, Gook seems to have come to a decision. As he walks back home, he recounts the number of times they have fought and eventually reconciled. But as soon as he reaches home, Gook is shocked to find the place is in disarray, and Tae Joo is missing. He is aghast and searches for Tae Joo everywhere. Believing that Tae Joo has been kidnapped, he calls the Chairman and leaves a message on voicemail. He searches for Tae Joo’s phone’s last location and reaches the place only to discover the phone broken on the ground. Tae Joo is not there.

Pil Hyun calls him and confesses that he told Tae Joo’s father about Gook and Tae Joo’s closeness. He admits that he had been spying on them, and his father has been reporting to the Chairman. I’m surprised that Gook’s first thought is only about Tae Joo’s safety; some things never change. He is least worried about the Chairman’s reaction or subsequent repercussions.

Tae Joo, on the other hand, is entirely unrepentant in front of his father. In the true aristocratic style that represents the rigid Korean mindset, the Chairman regrets his decision about raising “something like him in the first place.” Tae Joo seethes in anger after the Chairman mentions Tae Joo’s mother, prompting Tae Joo to fire back about not dragging his mother in this issue. Right on cue, Gook arrives on the property, and the Chairman sends his men to control him. But the henchmen’s efforts are futile as they are no match for our strong bodyguard who single-handedly trashes them all.

As Gook walks inside the main hall, the Chairman rebukes him for his behavior and actions. Gook apologizes and accepts that he can’t win against the powerful Chairman. He requests for some time to talk to Tae Joo. The Chairman gets angrier and his security men start beating Gook again. Tae Joo instantly begs his father to leave Gook alone and accepts his decision to study abroad. Before leaving, however, Tae Joo requests for some alone time with Gook.

With just a little stretch of credibility from the script, the Chairman allows them to be together for the night. Back home, Tae Joo fails to understand as to why Gook returned to him. Gook smiles and asks if he doesn’t know. Tae Joo is entirely despondent and curses Pil Hyun. Gook hugs him tight and admits that he has always liked Tae Joo. As they lie down on the bed, Tae Joo questions him about confessing this now when Tae Joo is leaving for England. He then scolds Gook about not accepting his feelings previously and that sadly, they didn’t get to kiss. Gook tries to kiss him, but Tae Joo demurs this time, not wanting to kiss someone with blood on his lips.

Tae Joo promises that he will come back, but Gook asks him to stay in England. Tae Joo is unapologetic as he remarks, “My Dream is to live happily. But I’m happiest when I’m with you. So I’ll come back.” The separation phase is difficult as Tae Joo walks out of their home. It was a heartbreaking departure.

Fast forward three years later, Gook is working at HyeMi’s Mom’s Restaurant. The atmosphere there is sad as Gook has made plans to move to Japan. Pil Hyun shows up, seems to be dating Hye Mi, whose mother prefers Gook instead. Mom cries her heart out when Gook confirms he must leave for Japan.

Hye Mi asks about Tae Joo, and Pil Hyun informs that he talked to Tae Joo about Gook’s departure to which Tae Joo said nothing in return. Gook has apparently given up on waiting for Tae Joo and is leaving for Japan to get over him.

However, fate works in strange ways. Just before going to the airport, Gook takes a seat in a nearby park lost in his thoughts. On a medium shot of Gook, a figure walks behind him, out of focus, and apparently sits in the next swing over. We cut back to Gook’s face as the person next to him starts talking, stands up, and walks towards the small lakeshore. All the while, Gook’s eyes are getting wider and wider.

Of course, it’s Tae Joo, having returned from England. The happy pair are reconciled as Tae Joo claims he has returned to keep his promise. They have a sweet moment, and as usual, Tae Joo rubs on Gook’s ears. Gook pulls him in closer, and they share a sensual kiss! Albeit a rather static kiss, but it’s a set of kisses nonetheless.

When I started watching this drama, I accept it was purely for swooning over the two handsome main leads. I’m a huge fan of Korean dramas, but this was something new. We weren’t dealing with a normal heterosexual love story. I was quite nervous about the ending from the start. As someone who reviews Chinese Bromance dramas, I wasn’t sure if Energetic Company and W-Story would do justice to this pair.

However, I was surprised by the burning hot chemistry between the Tae Joo and Gook in the introductory episodes. Tae Joo thinks of himself as a playboy, and it’s obvious that Gook has feelings for him. The tug of war was interesting to watch, where Gook would unknowingly pull him closer and then repent later. When Hye Mi was introduced, I wondered why we are going down the jealousy lane again. Shouldn’t they have thought of a more convincing subplot? Then I realized that Tae Joo’s character is such that nothing apart from good ol’ jealousy will sway him.

Tae Joo is a very confusing individual. On the one hand, he pushes Gook to date Hye Mi and, on the other hand, feels jealousy when Gook asks Hye Mi out. Sometimes he is insecure about their closeness, but he’s always playing mind games with Gook, even to the point that on several occasions, Gook demands variations of the phrase “Don’t provoke me.” As the actor portraying Tae Joo, Han Gi Chan might be a newcomer. However, his acting skills are on par with the seasoned Jang Eui Soo as Kang Gook. He didn’t falter for a moment and delivered his lines with the finesse that is unexpected of an inexperienced actor.

The ensuing confusion, jealousy, betrayal, and acceptance were well played off. While Tae Joo readily accepts his feelings, Gook has to battle inner conflicts. Fifteen years is a pretty long time to take care of, guard, and eventually, love someone. Imagine the wear and tear his heart has gone through while watching Tae Joo flirt with all those girls in his lifetime. We might find Gook rude when he rebukes Tae Joo and his feelings. But we have to consider the fact that he might actually be wary of Tae Joo’s ever-changing mindset and also the difference in their social stature. The show successfully drew the Korean dramas out of their brackets when it gave us the happy ending that no one anticipated. I was pleasantly surprised.

Although the Finale seemed a bit rushed, nothing matters as long as Tae Joo got to be with his Gook. I wouldn’t say their kiss was phenomenal, because that’s not true. Compared to recent Thai BL dramas, it was rather dull. But what made the moment special was that genre Boys Love is finally being accepted by the Korean Censor Board. This show set a precedent for others to follow on. I’m hoping for more Korean BL dramas in the future. With the kind of massive production and handsome leads they use, Korean BL could definitely conquer the world. Here’s hoping that we get a Second Season with Han Gi Chan as well as Jang Eui Soo playing Tae Joo and Gook again. Their love was inspiring, and I’m hoping we get to see their “Happily Ever After.”