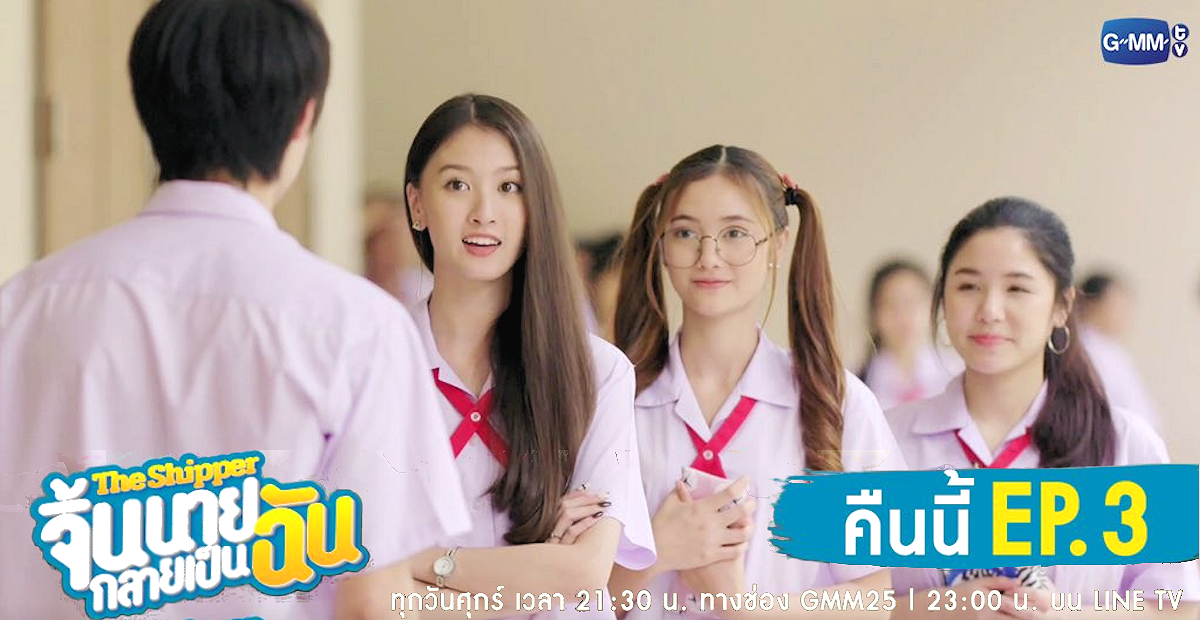 Every BL show has that episode where we see what we think is going on and what is really happening. Most shows do it midseason, but “The Shipper” does its game-changer early on in 3 and 4. In Episode 2, we see KimPan make the declaration she is going to make her ship sail naively, so when the body switch is undone, Kim and Way will be together. Anyone with common sense can see the flaw in that logic, but as a selfish 16-year-old girl with no sense of consideration for other people, Pan doesn’t. What could go wrong? Let’s find out in Episode 3.

Pan started learning about Kim by studying his textbooks and going through his room for a better understanding of him. Because, it is entirely possible to learn how to be someone this way and not through their social media (Obviously, that’s where she should be snooping but shh don’t tell her that). She’s far too busy being thrilled to be in the room of her ship to care about actually learning anything useful to understanding his personality. Instead, she starts by smelling his clothes (creepy), throwing a dart at the dartboard, which goes into the hand of an overconfident Angel of Death by accident. Oh hello, Angel of Death, when did you get here, who cares you’re here to save me from self-delusional Pan, so I don’t care.

The two have an annoying in a “how racism is handled conversation” on whether the Angel of Death has a cellphone. She doesn’t; Pan racially profiles Angel of Death, incorrectly at that, as Chinese by asking if her ancestors burned Tek Notes for her. Angel of Death Is rightfully offended and snarkily responds does she look Chinese (I mean seriously…does she? No dear Reader she doesn’t). This show seriously needs to level up Pan as a character sooner than later.

She arbitrarily over-sexualizes people, has no regard for other people’s feelings or lives and mislabels people’s races with no apology, and that’s pretty toxic….just saying. I think it’s silly this show handles all of this as if it’s status quo and perfectly fine. None of this is, in fact, fine and annoys the hell out of me, but this what our Frigay is left with, so let’s continue. There’s a reason that the Angel of Death is there, which is to make sure Pan is fine being in P’Kim’s body. Pan confidently states she knows everything about P’Kim. She lists general information already stated and Khet’s information about his brother’s lactose intolerance and concludes that he has a cute piggy bank and is eco friendly. She is making him the perfect match for P’Way (This Girl is doomed). Angel of Death is either oblivious to this or doesn’t care, hard to tell, but don’s a black boa and a cheap flag of Italy and states she is off to Milan. When Pan asks why, the Angel of Death declares God is there, and she is going to find a way to undo the body swap. (An obvious lie but Pan is oblivious, so she doesn’t notice.) And just like that, Angel of Death is gone, and Pan is on her own as KimPan.

In class, KimPan proves, to her credit, she has learned math by raising her hand confidently to solve the equation no one else can solve. The teacher tells her not to help the class, and KimPan notices P’Way isn’t there and asks where he is. P’Way responds he’s helping a sibling and is super bored and sends a selfie showing a cute bored face (Gaydar pinging cause how many straight guys send selfies to straight friends). KimPan is happy over this, and they text back and forth. When the subject of having P.E. comes up, KimPan fantasizes about being in a boy’s locker room filled with abs and pecs.

The scene shifts with Phingphing admiring her press-on nails before her underlings. She states P’Way would not approve because she claws up his back during sex. Then asks what she should do, and turns her attention to Soda for the answer. Soda answers with a logical tell him you don’t like it, and I instantly love her. It’s taken this long for something sensible to be said in this whole episode…Phingphing respects this and invites Soda to join her group (warning sirens flare in my head). Soda is shocked as well but asks to join in putting on more lipstick, and Khet, who was pretending to sleep while actually listening, stops Soda and asks if she is sure about joining Phingphing’s group, and Soda ignores his warning and proceeds.

Ohm Pawat, as Khet is enjoyable because he doesn’t over shine anyone and plays the quiet, knows it all character very well. I wish he were older in the show than 15 cause he doesn’t ever feel like the annoying little brother he is supposed to be, but Khet and Soda are two of my favorite characters, so I overlook it. Next, we see KimPan coming down the hall and seeing Phingphing with her “Best Friend’s forever gang,” and Soda stops to ask. This scene is interesting in that it is very dramatic and foreboding. I loved the camera angles and the implications in what is said and that they show KimPan as just Pan so you can see her reactions. Very smart move here, and it adds to the heaviness of the scene.

The locker room scene pretty telling as you see a 16-year-old girl in a boy’s body in one. Her preconceived notion of all boys being hot and clean is the first delusion to be slaughtered as it is shown as messy. The boys chase the fat student around, slapping him with towels, and when he slams into a locker next to her, she shouts “Shit” in her mind. Next is her delusion boys don’t gossip. Here it does another fantastic example of good film making by cutting back and forth between the boy and girl locker rooms. We see girls being vicious and putting on airs of chastity. While in the boy’s room, the boys discuss who they slept with, and through the back and forth, you see the “virgin” is, in fact, not. If this show had demonstrated any amount of depth before this, it wouldn’t be so jarring, but to show this level of honesty was a bit jarring. Teen sex is a serious business, and the show in this scene handles it well.

Sticking with this honesty style of writing, we see the “Best Friends Forever gang” are, in fact, wicked in regards to Soda via chats she isn’t in They text how they intentionally chose a bad photo of her for their Instagram page and show they don’t actually like Phingphing. This duplicity, being the game-changer in the episode surprised me as it’s so early. But as it goes on to discuss sex videos and we see the “can I share it to just two people become everyone in the locker room,” it has taken a darker turn. Which again is fine, shows do this, but with all the promotions being so kid-friendly, it is shocking to see this in a show for teenagers. The boy’s topic turns to the fact that P’Way isn’t in the group, and KimPan has regained her damaged hopes not all boys are trash. But then he is added, and her/his hopes are trashed once again.

During P.E., P’Way notices KimPan’s depressed mood, but when asked, KimPan says nothing is wrong. Then in the locker room, P’Way overhears talk of the hidden camera sex video and is clued in, and he doesn’t visibly show any sign of interest. He nonchalantly agrees that it’s “dope,” and goes about his. However, KimPan takes this as confirmation P’Way is also a toxic male and sulks. Once making sure KimPan is alright, he leaves to see Phingphing, who is bullying Soda. No one should be surprised by this as she was made aware of the fanfic in the first episode. Her friends gang up on Soda, who is, of course, taken off guard by their viciousness as she is slapped and hosed down with a bidet hose.

Soda sulks sadly over being once again alone when a towel is tossed on her. The helper ends up being Khet, who, of course, is a jerk about her actions leading her to this and more than once she tries to hug or kiss him. I loved this scene so much because it was so Anime how he stopped her advances with a well-timed hand to the forehead. I ship these two, there I admit it. The chemistry between these two is there. He tries to convince her to stop shipping, and she won’t. When she mentions Pan, you see a moment of sadness pass over Khet, which is a testament to Ohm’s acting abilities(I praise him because he gets such little screen time and really makes it work for him.)Soda mentions how much she doesn’t want to eat alone, and he invites her to go with him. It’s cute, funny and shows different sides of their characters, and I loved every second of it.

In the final part of the episode, we see KimPan being invited to eat with P’Way. The two eat at an open-air restaurant, and the atmosphere is very date-like. The things P’Way says lifts KimPan’s mood as they have an eating contest. It’s so freaking cute to watch them together, and I, of course, ship these two (PanKim can sleep forever, it’s fine). KimPan eats too much and throws up and leaves a noodle dangling from a nostril. In typical teen boy grossness, P’Way finds this to be absolutely adorable and even blushes (my gaydar is now a siren.) As P’Way walks them home, piggybacking KimPhan on his back the whole way. He explains that he is the most comfortable when he is with P’Kim, as he has to act a certain way with Phingphing. KimPan is smiling like a loon at this and takes selfies while they walk, and P’Way smiles from the heart in them as well. It’s a cute, honest scene where we finally see a bit more about P’Way. This mood is, of course, ruined when P’Way mentions P’Kim’s girlfriend, Kana. With an “Ehhhhh” from KimPan, we see him/her dash home to learn who Kana is and learns the plant she thought was Kana was the girl’s name. P’Kim’s phone rings, and it is, in fact, Kana setting up a time for their date.

My Thoughts On This Episode

This is by far the best episode of the show thus far. It proceeds with a good balance of showing and telling and is written well. It displays the best of each character, good or bad. Well paced and waaaaay darker than any before it, I enjoyed the content. Is this suitable for teenagers, not really but The “Shipper” never said it was. Like “Make It Right,” it is a sex comedy. Depicting negative views of girls and boys’ worst traits when it comes to sex was a bit hard to swallow, but it was needed to give KimPan a more mature and honest view of people. That said, it did offer a very dim view of Pan as a person in how dumb she is, and that was annoying. Seeing her with other characters lessened that.