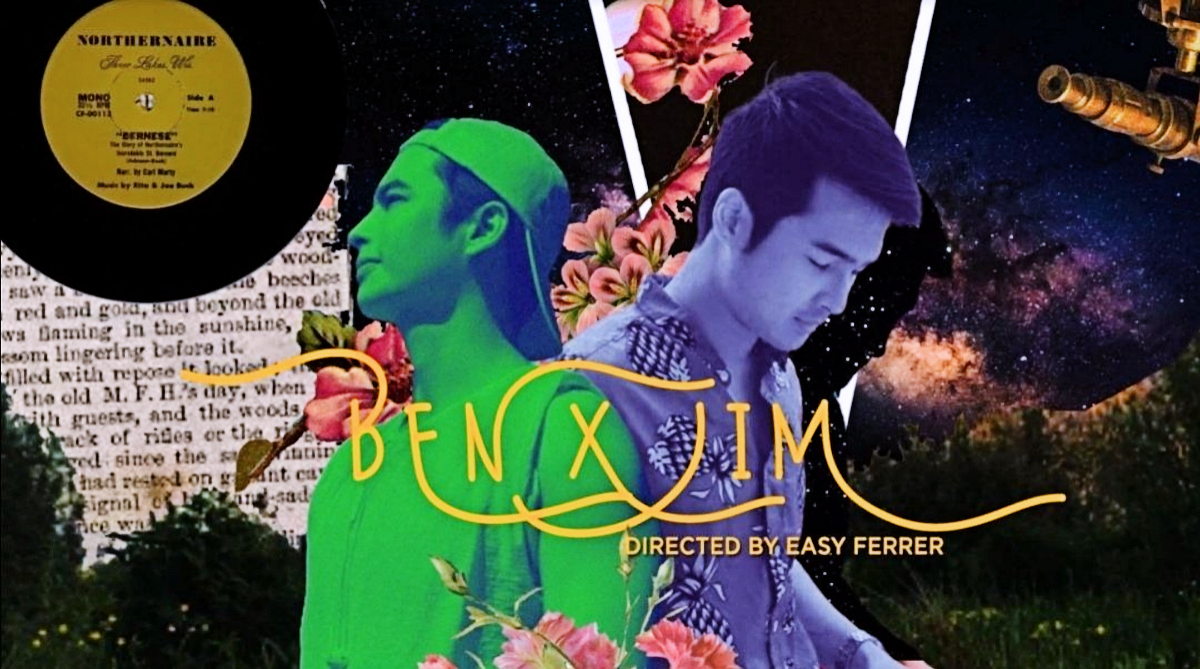 With the sudden evolution of Pinoy BL, there is a fast expansion of new shows focusing on BL. We have a vast lineup of new shows that are toying beyond the basic concept of “Engineering + Medicine Faculty College Romances.” Gone are the days when Thailand held the monopoly on the “Boys Love” genre. The Philippines is dishing new gourmet meals dressed in intense flavors and have unique storylines that are wide and varied compared to the slower trends that the Thai BL’s focus on.

BenXJim is the latest offering of the Pinoy BL paradigm. Produced by Regal Entertainment Inc., this drama is centered on “the story of two people who turn from strangers, to friends, to lovers, back to strangers with memories.” Does the premise sound painful and reminding you of old forgotten moments in your life? Because I’m guessing that’s what the show’s producers and director Easy Ferrer are aiming for. A breezy romance that stirs up emotions and makes you recollect the love you lost or were forced to forsake! With an enviable cast like Teejay Marquez, Jerome Ponce, and Ron Angeles, BenXJim’s pilot episode left me with a bittersweet feeling.

The drama follows the story of Ben Mendoza, a 23-year-old guy who lives alone, is supposed to graduate from college after eight years, but then the Pandemic happens. As soon as the lockdown starts, he begins selling things online to pay bills and prove to his overbearing parents (who reside in the US) that he can make it on his own in the Philippines. Then, he learns from his next-door neighbor’s housekeeper that his childhood friend Jimson Alcantara, with whom Ben has been harboring deep feelings, will return to spend the lockdown in their hometown. Suddenly, memories of old times return to him, making him feel anxious about how it will be between them this time.

● Teejay Marquez portrays the main lead Ben Mendoza. He doesn’t have high aspirations in life, and his parents are disappointed with his life choices. Ben just had a break up with his boyfriend Leo, who is trying to get back with Ben. For seemingly like an eternity, Ben has been secretly harboring feelings for his childhood friend, Jimmy.

●Jerome Mendoza plays the role of Jimson Alcantara, who is a famous Internet celebrity. Ben and Jim were close childhood friends, but then Jim moved out of town and hasn’t been in contact much with Ben. They reconnect when Jimmy returns to his hometown due to the lockdown.

As Ben plays the part of a cute boy, “Trying hard to make ends meet,” so that his online followers would buy more stuff from his online store, his ex-boyfriend Leo crashes into the live stream to air their dirty laundry. As if that wasn’t enough, Ben’s overbearing Mother calls him from the US to dis him on how disappointing his life is. The only silver lining of the day is when his dear friend Flo calls and forces him to follow an Internet celebrity – who unexpectedly turns out to be Ben’s old childhood friend, Jim Alcantara. While he is recollecting old times, Ben is faced with another momentary distraction- Olan. As Ben waits with bated breath for Jim to return, will the wheels of fortune turn? Will he confess his feelings to Jim this time? How will this love story turn out?

My Opinion On The Pilot Episode

Have you ever watched a show that started off slow and wondered where it is headed to? And then suddenly it does a backflip and leaves you enthralled. That’s BenXJim in short for you. I won’t say that I was captivated by this drama from the start. The episode starts with Ben trying hard to sell his personal belongings on his “Struggling Student Store.” Yes, Teejay Marquez is adorable, and he reminds me of JC Alcantara! I’m guessing that Ben’s followers only watch his Livestream to see his cute antics, rather than buy anything. My doubts turn out to be correct because he does complain about fake buyers. This part might seem choppy, but it’s important because it portrays the exact abysmal situation that many struggling students face during the lockdown.

Ben struggles to make ends meet, but despite that, he has a bright and happy demeanor. All is well until his ex-boyfriend Leo decides to crash the party. Ben seems to have avoided him, so Leo decides that the next logical thing is to air their issues in the Livestream. It’s rather comical that Ben’s followers know about Leo and don’t give up on a chance to curse on him. His family situation isn’t any better- his overbearing Mother isn’t excited about his life choices (she isn’t happy that he is gay and chooses to live his life the way he wants). As he gets done handling her nagging overtures, his close friend Flo calls. I kind of like this friendship because Ben seems lonely, and Flo understands him well. She strongly suggests to him to follow a new celebrity on Tiktok. This moment is where the storyline gripped my attention. Ben is awed instantly, and as he goes through Jimmy’s Instagram, the gleam in his eyes makes your heart flutter (Flo stop interrupting the cute boy while he is feasting his eyes). Flo doesn’t believe him when he says that Jim is his childhood friend (Don’t mind her, I believe you).

The next scene is quite interesting. Ben waits for the delivery boy and is being impatient. He deigns that the guy is stupid for not reaching on time. And that’s when Olan makes his grand appearance! I’m saying so because Ben was cursing the guy a moment ago but is left tongue-tied when Olan removes his helmet and mask. The attraction is obvious, but the antagonism isn’t! For some reason, both of them step on the wrong foot, and their argument flares. It’s intriguing how Olan sizes him up and then delivers his criticizing dialogues with a bright smile on his face! Ron Angeles is good here, and his character is a far cry from his last role in the Pinoy BL drama “In Between the Series.” I’m not sure how Olan plays into this storyline, but he is certainly a unique character, and I wouldn’t mind an “Enemies to Lovers” trope here.

When Ben is about to go inside, he meets the housekeeper who works next door. Jim lived there before he moved out of town with his parents. The housekeeper joyously informs Ben about Jim’s return to his hometown. And with that, we are back to gazing at Jim’s profile. Ben is totally besotted with Jim as he scrolls through the profile pictures. He even has a scrapbook with their school time pictures. It becomes glaringly obvious that Jim was his childhood crush or maybe even his first love?

Either way, Ben is over the moon, thinking about his dear friend’s return. He decides to plant himself in Jim’s old home and even takes to repairing things. That’s so sweet, and the housekeeper agrees. But his good mood doesn’t persist when faced with good ol’ deliver boy, Olan. Man, these two have some issues. There is plenty of attraction, yet they don’t seem to get along. Will the show have a love triangle with a possible deflection?
Ben is restless and bubbling with excitement, waiting for Jim’s arrival. So much so that he stands in front of the mirror and rehearses his welcome speech. Ben sounds so cringeworthy that I felt sorry for him. He is a bundle of nerves, and while I understand his excitement, my mind was constantly screaming, “FOR HEAVEN’S SAKE, DO NOT SPEAK LIKE THAT IN FRONT OF JIM.” Ben is annoying yet endearing.

Ben spends his time staring at Jim’s home next door while baking goodies for his long lost friend. Flo still doesn’t believe him and thinks that he is daydreaming. But like I said, I appreciate this friendship because she wires him money to pay his pending bills and worries about him. That’s a definite plus in my book! While they are talking, we see a car entering the neighborhood (with Jim in it, obviously). Poor baby Ben misses the entry, though. The waiting period is difficult because not knowing when the wait will end is agonizing. So, when Ben chances upon Jim’s windows at night and finds the lights on, it’s like gazing at the stars. He whistles to get Jim’s attention but gets no reply. Disappointed, he goes to sleep. Sometime later, Ben hears a whistle again. I loved this scene and the way they build up the suspense When Ben finally confesses that he misses Jim and just wants a glance, voila! Jim appears out of nowhere with a smirk saying, “Wish Granted.” I had seen the trailer and knew how this scene was going to play out. Yet that didn’t deter my excitement because Teejay won my heart with his exuberance and yearning. The way Ben is still besotted with Jim despite the distance and the passage of time makes you realize how much Ben likes him. Paired with the happiness on his face when Jim stands in front of him, Ben is a goner for sure.

Though the show started a little slow, it picked up midway, and it is quite interesting. The next week’s premise is making me jump in anticipation. As Jim questions Ben on his possible flings or, more precisely, the number of girlfriends he had, Ben turns the table and lists his boyfriends.
Will Jim’s feelings change with this revelation, or will they continue to be friends? Will Ben ever get a chance to confess his feelings to Jim? Will Leo give up on harassing Ben, or will he bring new troubles to Ben’s doorstep?

Keep watching this space for more updates as we promise to thrill you with fresh opinions on this drama!