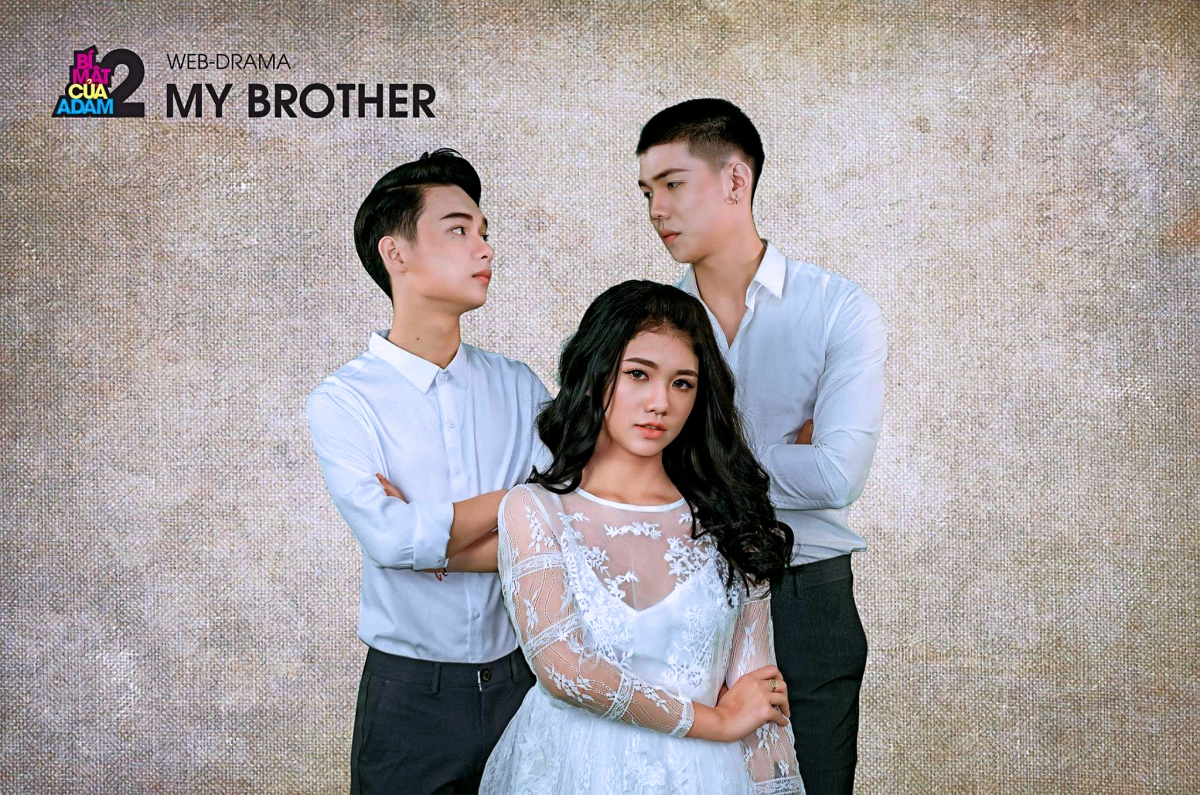 Phong and Vu are finally together, but that doesn’t mean the end of the problems. Instead, our sweet couple is riddled with trust issues and an unwanted pregnancy. On the other hand, Thien is faced with an unacceptable alternate reality that he can’t comprehend. I’m enjoying the trope so far as the show keeps throwing unpredictable twists and turns. At least it’s better than the monotonous plot contrivances in the original Thai movie “My Bromance.” Let’s see what is happening with our main couple as they try to understand each other.

Phong drags out an unwilling Vu for a morning walk. He teases Vu and tries to appease him by offering to take him to any place of his choice. Vu chooses the book store as his academic year is going to begin soon. Tung Sun is walking with his friend, and he looks dejected. Tung Sun is disappointed about not finding any clues; it looks like he has been searching for someone for a year. He is contemplating switching jobs when he spots Phong and Vu on the other side of the road. He quickly drags his friend along and hides. When his friend inquires, he explains that he is hiding from his former boss.

Phong and Vu are at the book store, but Vu looks disturbed by something. Finally, as he walks out, Phong rushes forward to open the door and extends his hand to Vu. Seemingly pleased at Phong’s gesture, he walks out of the store holding hands with Phong.

Phong can see that Vu seems disturbed and inquires about it. Vu explains about his insecurities about their relationship. Phong requests Vu to trust him and give him some time. He exerts about explaining everything in the future and is hoping that Vu will wait for him till then. Vu accepts and apologizes for not realizing sooner that Phong is facing problems. Phong promises that he will always make sure that he doesn’t make unhappy or hurt by his actions.

It’s late-night when Thien calls Vu and requests to meet him. When Vu arrives, Thien hugs him tight and begs him to be by his side. Vu pushes him, and Thien requests him to help him overcome his nightmares. Vu is very understanding and mature as he replies, “You are hiding something, but do you really need me? I cannot be by your side forever. You have to overcome your problems on your own.” He asserts again that he has always considered Thien as a good friend and will continue to do so.

Thien again has a nightmare, but this time, he keeps hearing a newsflash about a flight crashing. Apparently, Mat Mat and his mother were on that flight, and Thien wakes up quite confused by the memory.

Vu returns home and heads straight to Phong’s bedroom. He asks Phong to tell him everything, and Phong agrees. They have a charged moment, and Phong kisses him.

Phong is walking back home in a drunken state. He is unable to walk and sit on the staircase in a drunken stupor. Manager Lam calls him and apologizes. He admits to Phong that he is the birth father of Van’s child. Phong is shocked and curses at him.

Thien is sitting in a park staring at Mat Mat’s childhood picture. Right at that moment, Tung Sun walks by, slips on a banana skin and falls on Thien. At first, Thien gets angry, but then he notices that Tung Sun has the same birthmark as Mat Mat. He reaches out to Tung Sun and inquires if he knows anyone by the name “Mat Mat.” Tung Sun is even more shocked by the inquiry and asks Thien how he knows the name Mat Mat.

Van follows Vu and confronts him about his relationship with Phong. Vu asks her to talk directly to Phong and tries to leave. But she sees the hickey on Vu’s neck and slaps him hard. Vu falls down, and she shocks him by lying that her child belongs to Phong. Van is about to strike him again when Phong intercepts her. He warns her to get away from Vu and tells her about Lam’s confession.

As Phong and Vu walk home, Vu breaks down and confronts Phong about lying to him. He runs away, and although Phong tries to stop him, he misses Vu from a standpoint. Vu rushes to his old home, which is currently occupied by his cousin Nam. Vu starts crying, and Nam brings him inside. After hearing Vu’s story, Nam comforts and tells him to stay at their family home until everything is resolved.

The episode begins with Tung Sun and Thien’s confrontation. Thien repeatedly asks Tung Sun if he knows anyone named Mat Mat, and finally, Tung Sun accepts that Mat Mat is his twin brother. Thien is as shocked as I was.

Manager Lam is at home and thinks back to the night when Van came to his home. She seemed lonely and wanted to spend some with Lam. Although he refused, Van convinces him, and they spend the night together. In the present, Van calls him and orders Lam to come to her immediately.

Vu is dejected and hurt at being fooled by Phong. Nam tries to console him, but Vu keeps cursing himself for his own stupidity in believing Phong, despite knowing that he had a Fiancée. But Nam assures him that he is not at fault. Since he had a Fiancée and was having a baby, Phong should have stayed away from Vu.

Van is certainly evil as she angrily bursts out on Lam for telling the truth about their relationship. She confesses that she never loved Lam and was only using him. Lam tries to reason with her that Phong only loves Vu and will never accept her. But she is too far gone as she admits that she’ll do anything to get Phong back in her life. She threatens him with aborting his baby she carries, in case he interferes with her nefarious plans again.

Tung Sun takes Thien to a hospital, and we finally get to know the truth about Mat Mat. It seems that both Mat Mat and his mother survived the plane crash, but a year ago, he was seriously injured in an accident. Since then, Mat Mat has been lying comatose in the hospital. As soon as they enter the hospital room, Thien is sad seeing Mat Mat in such a bad condition. Tung Sun further explains that the doctor seems to believe that Mat Mat has been waiting for someone.

Nam tries hard to cheer Vu up, but he just seems disinterested. They hear a knock on the door, and instantly Vu gets alarmed, thinking that it is Phong. He hides under the dining table, but it isn’t Phong that enters. Their cousin sister Chi Van who works as an air hostess has returned to the city. She walks in and instantly deciphers that there is something wrong with her baby brother Vu. Vu brushes off her concern.

Phong is sitting in a park when he sees a quarreling couple. That seems to give him an idea, and he calls his stepmother. He inquires about their old home and rushes to the place.

Vu is still lamenting over his life choices when there is a knock on the door. He excitedly rushes to open the door, thinking that it’s the pizza delivery guy but is shocked to find Phong instead. Phong picks him up and proceeds to carry him out when Nam intervenes. They roll around on the floor like school kids until Chi Van calls them on their childish behavior. Nam decides that he will not allow Vu to return with Phong. Phong, therefore, decides to stay with them instead and proceeds to make himself at home.

Quite a lot of revelation and shocking information! Let’s start with Thien. I guess his attraction to Vu was more based on his belief that Vu might be his childhood friend Mat Mat. How he doesn’t realize that both have different names and might be different people is beyond me! Maybe he is giving himself a false hope that he has finally found the person he has been searching for all his life. Vu declining his proposal and choosing to be his friend instead was certainly a huge blow. But the situation improves when he runs into Tung Sun and finally figures out Mat Mat’s true identity and location. Thien seems like a mature person, so how he handles the current scenario is certainly worth watching.

Phong and Vu, on the other hand, are on unstable grounds. I must say that I agree with Nam on all accounts. I can understand that Phong loves Vu and doesn’t care much about Van. But instead of making the wrong decisions in a drunken state, he should have thought about the consequences. He certainly knows what kind of vindictive person Van is. Did he really think that he would get away with dragging Vu into his life, without resolving his issues with Van be successful?

Van was playing Phong for a fool, and I feel sorry for him, but either he should have been honest with Vu from the start or got things sorted out with Van before he got physical with Vu. However, matters of the heart cannot always be resolved reasonably, and things are bound to get messier. I’m hoping that Phong and Vu can talk through the issues straining their relationship and establish the lost trust again. Keep watching this space as we bring more updates from this mini-series.