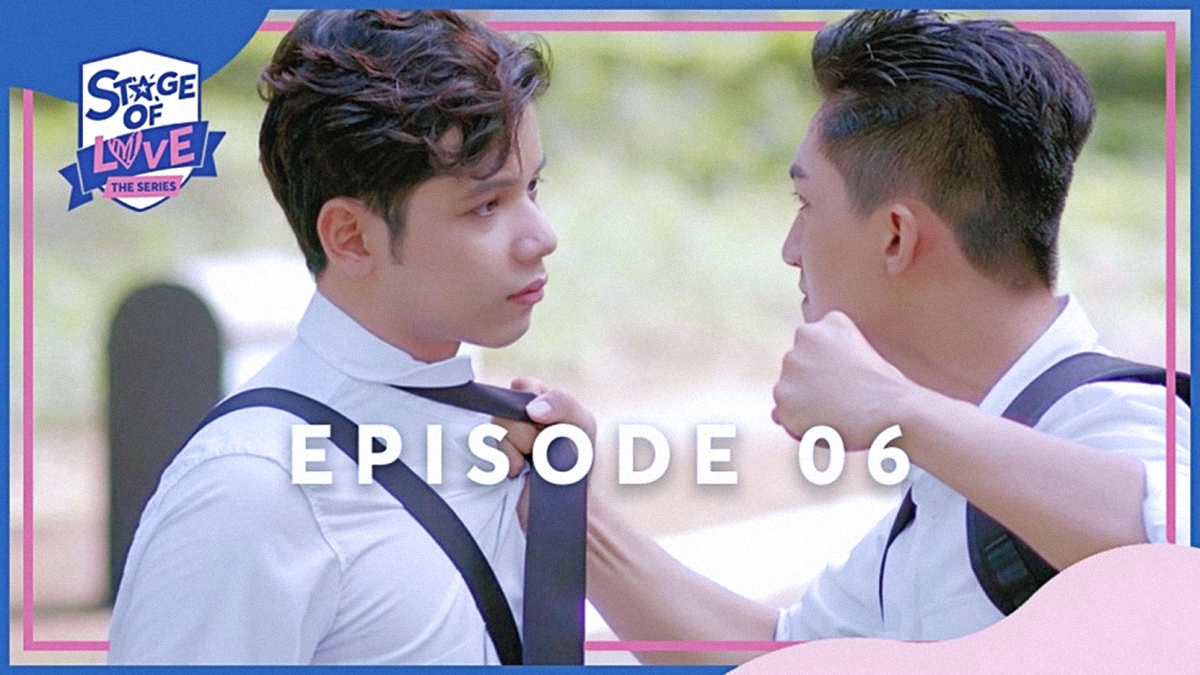 Bao becomes a victim of homophobia as Nguyen’s confession video goes viral. Nguyen decides to be the sacrificial lamb and cut off ties with Bao. This episode was a downward slope, and Khanh’s mature demeanor was the only saving grace. I wonder why people love to redirect their misperceptions and vendetta on innocents who do not deserve that kind of hatred. Let’s review Episode 6 and see how it fared.

The episode starts with Nguyen’s sudden confession. Although stunned at first, Bao wants to know why Nguyen likes him. Nguyen is awfully honest as he admits that there is no reason to like him and that he shouldn’t feel awkward about the confession. As he is about to leave, Bao inquires if Nguyen doesn’t want to rehearse. Nguyen smiles and replies that he only has problems while standing on the stage. Nguyen assures him that he might return to Theatre if Bao continues to stand beside him. Bao promises that whenever Nguyen decides to be back on stage, he will be there.

Nguyen is lost in his thoughts when Hy joins him. Hy seems distraught, and Nguyen wants to know what the problem is. Hy talks about his relationship issues with Khanh. Hy finds himself lacking when compared to Khanh but also professes his undying love for her. He is afraid because their future seems unpredictable. Nguyen assures Hy that he understands the uncertainty Hy feels. Hy questions him how he would know this feeling, and Nguyen admits that he likes Bao. Hy is shocked that he likes Bao and questions him. Nguyen replies that even he doesn’t know the exact reason, and he has already confessed to Bao. Hy wants to know about Bao’s reply, but Nguyen cuts him off, saying that his love is one-sided. So, he is not expecting any kind of reply from Bao. Hy sympathizes with Nguyen for being stuck in such a situation.

The next morning as Bao walks into the campus, he notices that people are staring at him. Huan reaches out to him and shows him a video of his confession which was uploaded on their University website. There is a lot of backlash from the students, and everyone blames Bao for targeting a popular student like Nguyen.

Bao rushes to see Nguyen and asks him about the video. Nguyen is extremely rude to Bao and tells him to stop bothering him. Bao is surprised by the sudden change in his attitude, but Nguyen rebukes him and walks out. Huan takes Bao along while Nguyen stares at Bao longingly from a distance. Later, Huan tries to cheer up Bao by trying to divert his attention from the controversy.

Nguyen is yet again lost in his thoughts when Khanh chances upon him. Nguyen apologizes for yet again smearing the reputation of the Theatre Club. Khanh assures him that it isn’t his fault. The only person to be blamed is the one who uploaded the video. She correctly guesses that Nguyen didn’t discuss anything with Bao. Nguyen confirms, saying that he is scared. The backlash is mostly from the people who admire him. If he gets closer to Bao, then he will be hurt more.

Nguyen confesses that his love is one-sided. Khanh questions him on how he came to that conclusion. Did Bao ever say that he doesn’t like Nguyen? Maybe Bao doesn’t need his protection after all and wants to stand beside Nguyen to fight these rumors. She advises him not to do anything that he might regret in the future.

Hy meets with Khanh, and she is happy to have some quiet moments together finally. They discuss Nguyen and Bao’s controversy, and Khanh confirms that Nguyen has withdrawn from the club. Hy is worried because Khanh’s workload would increase. He feels helpless about being unable to help her. She, however, sweetly assures him that Hy just needs to support her on the day of their stage play. She doesn’t expect anything else in return.

Huan confronts Nguyen and hits him hard. He questions Nguyen on how he could stand by and watch while people are berating Bao. He warns Nguyen to stay away from Bao and walks off in anger.

Nguyen returns home, and his mother becomes worried to see him hurt. She asks him to apply the ointment and asks about his love life. Nguyen tries to brush off her concerns, but she already guessed that he is in love. She has been noticing the changes in his behavior – Nguyen doesn’t have nightmares anymore, and he also smiles more now.

Nguyen and Bao both are unable to sleep at night. Nguyen suddenly rushes out. Bao stands in his balcony, and when he glances down, he is shocked to find Nguyen standing at his doorstep.

I’m surprised as well as a little disappointed with Nguyen’s random actions. He seems to be mature in most situations. However, when it comes to handling his own problems, Nguyen is often dismayed and confused. It took a lot of soul-searching for Nguyen to finally accept his feelings. So his sudden decision to back off when Bao needs him the most was infuriating. I can understand his apprehension and insecurity. But how can he decide on their relationship status all by himself? Doesn’t Bao get a say in this issue? Like Huan rightly pointed out, it was Nguyen’s confession that got Bao in this mess. Shouldn’t Nguyen be taking responsibility for his own actions?

I love how Khanh’s character is written. She never questions Nguyen’s choices and listens to him talk about his problems patiently. I like how she always pinpoints Nguyen’s mistakes and tries to get him back on the right path. Nguyen’s problems are not her concerns, and yet she always supports him unconditionally. Nguyen should thank his lucky stars for having friends like Hy and Khanh, ones who always stand beside him.

I’m hoping that Khanh’s advice to him and him listening to his Mom’s words will finally help Nguyen reach his own conclusions. Bao might seem frail, but he surely isn’t helpless. I’m hoping Nguyen shares his fears and insecurities with Bao. I’m sure they can fight this problem together and maybe in due course allow their true feelings to grow to fruition as well.