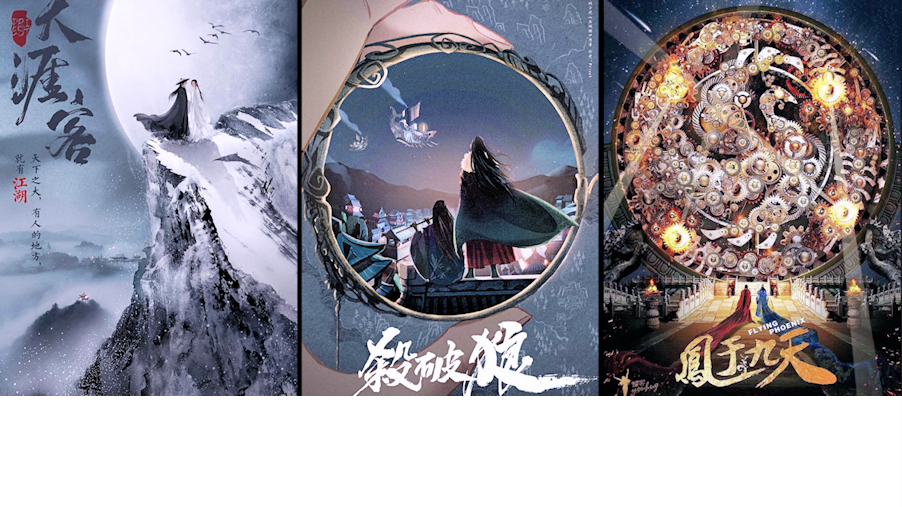 Even before Addicted Heroin exploded on the social circuit and took the Chinese Mainland by storm in 2016, there were numerous Chinese BL dramas that were consistently challenging the inner core of the strict Chinese Government censorship. Falling in Love with a Rival (2015), Love is More than a Word and Men with Sword (2016), Beloved Enemy; Advance Bravely; Till Death Tear Us Apart (2017) and Guardian (2018) were a popular few to name. However, it wasn’t until The Untamed (2019) became a global phenomenon that Chinese production houses took the Boys Love business seriously.

Now we have mass production of Chinese Bromance dramas that are being adapted from popular Gay Web Novels. The only glitch remains that the dictatorial and hypocritical censorship by the Government of Mainland China, which bans any kind of sexual or explicit homosexual content. The BL elements are neutered from the original content, and you end up with a “Bromance.” Winter Begonia, however, set a precedent by depicting their main character’s homoerotic relationship in a realistic manner, which left no doubts about their feelings for each other. Here’s a list of upcoming Chinese Bromances with “Brotherhood” or “Platonic Friendship” between their main leads.

Immortality (Chinese: 皓衣行) is based on the popular LGBTQ+ Xianxia novel “The Husky and His White Cat Shizun” (Chinese: 哈和他的白猫师尊) by Meatbun Doesn’t Eat Meat (Chinese: 肉包不吃肉). Starring two eminent names from the Chinese Television Industry, the show focuses on Taxian Jun (Arthur Chen), the tyrannical Emperor of the Cultivation World. He commits suicide and is reborn as his old self “MoRan.” Despite the reincarnation, MoRan has all the old memories of Taxian Jun intact and harbors a deep hatred for his master, Chu Wanning (Luo Yunxi). However, in the present, certain unfortunate events force him to see Chu Wanning in a new light, and both work together with the rest of the cultivating heroes to stop the villains’ conspiracy and protect the world.

This show faced major problems when fans and photographers hindered the shooting by taking pictures of the cast and crew with their hidden cameras. The release of unwanted spoilers resulted in an unfortunate event of one of the photographers getting beaten up by one of the production team members. Being a paparazzo isn’t without its hazards. The show’s producers had to release an official apology for that incident. Meanwhile, the shooting is progressing at a steady speed and will probably wrap up by September.

Author Priest’s BL novels are a huge rage in China, and following the success of “Guardian,” Youku is helming the adaptation of “Faraway Wanderers / Tian Ya Ke (天涯客).”
The story essentially revolves around our main leads. One of them is Zhou Zi Shu, to be played by Zhang Zhe Han.

Zhou Zi Shu is the leader of “Tian Chuang / Skylight,” an elite organization of gatherers and assassins who serve the Emperor. It’s hard to be recruited as a part of this organization and even more difficult to get out. Three years of bloodshed and remorse make our hero yearn for peace. He leaves the organization and roams the mountains of Jianghu in search of a calm life. But unfortunately, he meets our other lead Wen Ke Xing (Gong Jun), and gets embroiled in Jianghu’s chaotic existence. Youku has released promotion posters who look promising enough.

The show’s popularity can be presumed from the fact that Faraway Wanderers has already had a fan meet where the main leads Zhang Zhe Han and Gong Jun had an active interaction with their ardent fans on July 18th, 2020 at Hengdian World Studios.

A month after Youku announced “Tian Ya Ke (天涯客),” Tencent Video stepped up to the plate and officially adapted another Priest novel, “Sha Po Lang (殺破狼).” “Handsome Siblings” star Chang Geng and Winter Begonia fame Tan Gian Ji star as main leads in this period drama. The show named “Winner is King” started shooting on July 2nd, 2020, and is scheduled to premiere in 2021, with 45 episodes.

Set in an era of political upheaval, border town youth Changgeng is saved from a pack of wolves by Shen Shiliu, who takes him in as a godson. When nomadic tribes invade the kingdom, Changgeng discovers his true identity to be the fourth prince and that Shen Shiliu is, in fact, Commander Gu Yun. Gu Yun takes Changgeng back to the capital on an imperial decree, and the two must now defend their kingdom from enemies within and outside the kingdom.

The show’s production schedule is in full swing with shooting now, and we eagerly await more updates and exclusive photos from the sets.

The Society Of Four Leaves

The Society of Four Leaves (张公案), is another novel by Da Feng Gua Guo that is getting a live adaptation with its two male leads rumored to be Jing Boran as Lan Jue and Wu Lei as Zhang Ping.  The story focuses on the political rise of Zhang Ping from being a poor scholar to a minister in the Dali Court. Zhang Ping, despite his status, has sharp observation skills and involves himself in various government cases. He is particularly meddlesome and has a solitary nature. One day while selling noodles, he meets the Minister of Rites, Lan Jue. Slowly under Lan Jue’s guidance, Zhang Ping begins to solve cases while handling affairs at the court, slowing elevating his status as a genius detective.

There are rumors of an ongoing controversy between the show’s investors Tencent Video and star Wu Lei. It seems that the actor has been making demands about billed first and has refused to sign the contract. It is rather shocking because Wu Lei stars in the ongoing Tencent drama “Crossfire,” which is fast gaining popularity because of its unique time travel concept. The show’s producers are mostly probably going to cast another actor for the role of Zhang Ping.

Adapted from a novel of the same name by Feng Nong, Flying Phoenix (凤于九天)  started filming on August 18th, 2018.  Although the shooting has commenced, there have been no updates about the main leads as the dream’s producers are pretty tight-lipped about the casting.

The story mainly focuses on the romantic travesty between the Thunder Kingdom’s Crown Prince and the Regent. Feng Ming was only 19 when he lost his life saving a child from death without hesitation. The grateful father of the rescued child grants Feng Ming a second chance at life. Unknown to Feng Ming, his soul is whisked away to a faraway ancient land. Upon waking up, he finds himself inhabiting the frail body of Thunder Kingdom’s crowned prince, who is also graced with the title of the most beautiful man across all the lands. However, his beauty has a price as he attracts the unwanted attention of the minister of affairs, Rong Tian, who finds every reason to torment the prince mentally and physically. As Feng Ming starts to get a hold of the conspiracies surrounding him, what will happen when the prince’s true identity is revealed? And what happened to the ‘real’ prince?

Although there is no official announcement, Super Idol contestant Dai Jing Yao along with “The Sleuth of Ming Dynasty” fame actor Ashin Shu star. At this point, the fans are not happy with the lack of updates since it has been two years already.

Keep watching this space for further updates on these dramas, as well as many more upcoming ones.