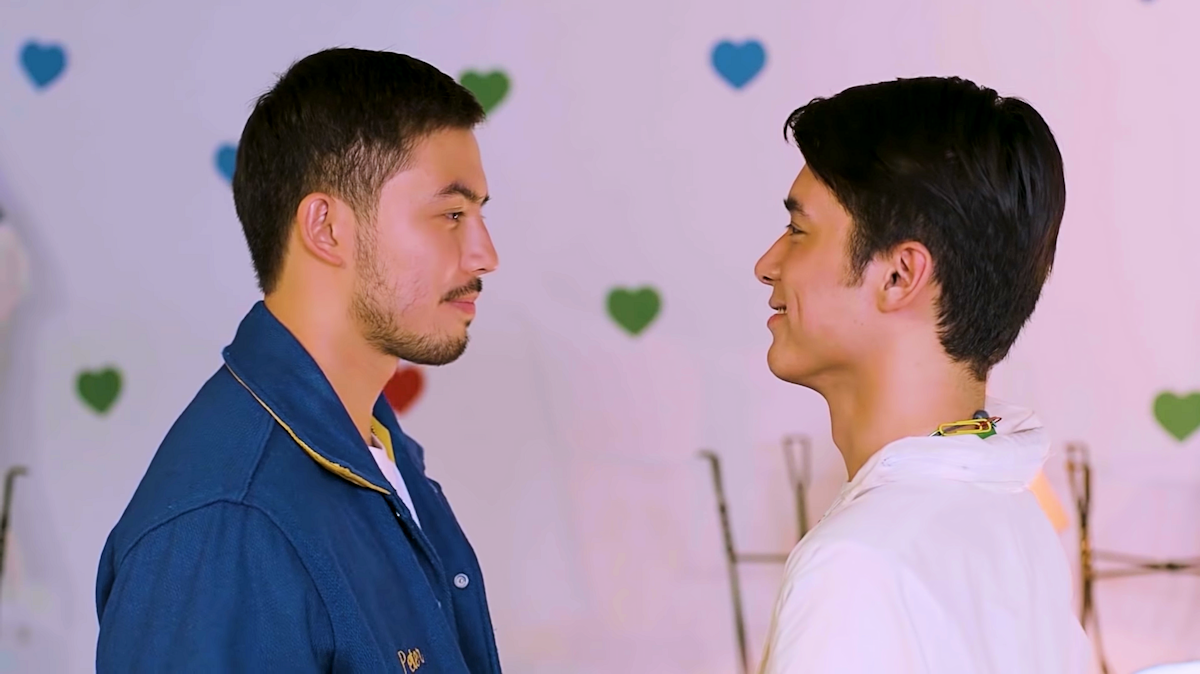 True Love always finds its way back to you. The path might be undecided, yet it always leads to the one you cherish

The Hello Stranger finale wasn’t perfect, far from it. But at times, the imperfections are so realistic that it makes you realize that our main leads are also human beings. The episode conveyed Mico’s most poignant fears as well as the self-discovery of his true feelings. It takes an incredible amount of courage to accept your feelings, not only in front of your friends but also to the person you love. JC Alcantra portrays Mico with larger-than-life exuberance, and I’m betting that no other actor could have played this role as well as he did. The character Xavier had a few surprises of his own in this episode as well. Did these two characters have an inevitable bonding from the start, or was there romance pre-destined? Let’s figure this out as we review Episode 8.

Following his friend’s advice, Mico seeks closure by confessing his feelings in front of Xavier. We are given a beautiful montage of their close moments as Xavier reminisces, and some shocking truths fall out of the closet. It seems Xavier has been hiding some pretty relevant facts that lead to the start of their relationship. The finale finally sheds light on them. Xavier successfully tries to bridge the distance between him and Mico with patience and understanding. Did he succeed or not, will they get back together, was their relationship destined or a farce?

The confession is equal parts beautiful and painful. For a shy and insecure person like Mico, “coming out” is an easier phrase spoken than actually doing it. We have to understand that although Mico is nerdy and at the top of his class, he’s ignorant when it comes to matters of the heart. His entire life has been centered on academics until Xavier entered his life and turned it upside down. From hating Xavier’s arrogant attitude to learning to trust him and then falling in love, this was an unprecedented journey for Mico. It seems to be quite a contradictory statement when Mico accepts that he likes Xavier because of the things he hates about him. That’s because Xavier makes him questions these new feelings that he has never experienced before.

Mico’s pain stems from his own insecurities and Xavier’s idiocy for getting back with Crystal. The fact that Mico couldn’t face Xavier while confessing his feelings actually illustrates how much he needed that closure. He is resentful, yet that doesn’t stop him from actually accepting the new things that Xavier taught him. Mico is pretty guarded about his feelings and Xavier has somehow set him free. Xavier taught him how to be himself, and in the process, Mico has become acquainted with who he really is. They are imperfect yet like pieces of a puzzle, they fit together. Isn’t it beautiful that there is someone who understands you and accepts you just the way you are!

The surprise element of this episode was Xavier. I truly appreciate how well Tony Labrusca portrayed this character. From playing off Xavier’s arrogant jock attitude in the initial episodes to closely following Mico’s quirks and trying to become a better person for the one he loves, Labrusca did it all. To see an otherwise strong character, display emotions like remorse and hurt made the character so much more relatable and close to life.

I also have quite a lot of doubts about his romance with Crystal. Was their relationship in shambles, before Xavier partnered with Mico? Was Mico the distraction he needed to forget his troubles with Crystal? Xavier breaks down hearing Mico’s confession, yet we don’t know anything about the current status of his and Crystal’s relationship. Did he break up with Crystal and give her the needed closure? These questions weren’t answered, and I’m not sure we care at this point. However, I’m hoping that the movie sheds some light on this issue.

Although not a surprise exactly, Seph and Kookai are also a huge part of the Hello Stranger phenomenon. The fans loved watching them as much as “XavMi.” This relationship faced major setbacks because of Kookai’s oblivious nature and Seph’s inability to confess his true emotions, but their ship has finally sailed. The announcement wasn’t anything out of the blue, but the fact that Kookai chose to create another of her special postcards shows that she has moved on and is finally accepting the new reality that Seph really likes her. Kookai can be pretty indecisive at times, but I’m hoping that she realizes Seph’s true worth and stays beside him. Of course, the Young Padawan’s are not completely without feelings when they realize that Mico’s silence is telling. Jun Jun presses Mico “What if Xavier suddenly confesses to you? Will you accept it?” Watch the look of memories crossing Mico’s face.

That brings us to the shocking revelation from the finale episode. Xavier CHOSE Mico first. This plot twist was so uncharacteristically surprising that it took me several minutes to believe and accept this turn of events. It was Xavier’s plan all along, and that means he noticed the quiet, nerdy guy in his classroom. Ms. Tina was right when she asks him why he wanted to be partnered with Mico. Although Xavier’s explanation seems satisfactory, I have my doubts.
Xavier is a real good actor because the way he acted surprised at their first meeting shows how much he enjoys ruffling Mico’s feathers. Also, in the initial episodes, I thought he was just lazy, and that’s why he didn’t want to do their project work separately. But now I’m not so sure. Clearly, it was his attempt to become an integral part of Mico’s daily life so they could talk freely. I’m guessing Mico intrigued him, and that made him curious.

From following Mico on Instagram to pestering him to follow his account back, Xavier’s attempts at trying to gain Mico’s attention seemed odd and out of place, but they had a hidden meaning. It had been pre-planned, and he was certainly the one who fell first. Although Xavier did seem sad after his break up with Crystal, it cannot be compared to his reaction when Mico stopped talking to him. Xavier never loved Crystal or hadn’t in a while, the way he goes after Mico’s affections. He wasn’t as devastated at the breakup, and that implies the real depth of his emotions for Mico. I’m so glad that he finally showed the courage and decide to rope in the Young Padawan’s help. Xavier might seem a little calculating and hella confused, but he repented for his mistakes.

Xavier’s love confession was different from Mico’s. I enjoyed it because hearing Tony Labrusca sing is divine. It keeps reminding me that he is not only a proficient actor but also an equally good singer. I was even more pleasantly surprised when JC joined in. I’m guessing that despite his doubts, Mico truly loves Xavier. He readily accepts the confession without any questions. The one thing that grated on me was that Mico didn’t ask Xavier about his current status with Crystal. Wasn’t that the entire reason for their apparent breakup? Why is Crystal being so casually brushed off? I’m hoping for better answers in the movie version.

Despite my reservations, I’m happy that Xavier and Mico cleared up their misunderstandings. Because damn, they do indeed make a handsome couple. The way Xavier looks at Mico like he hung the moon and Mico blushes profusely makes them entirely adorable. Some might have complained about the lack of kissing, but for me, Xavier hugging Mico tight was exhilarating enough. (Editor’s note: Well, it could be because neither has ever kissed a boy) They have just sorted out their differences, and I’m guessing Xavier is taking it slow. Regardless, their relationship isn’t defined by sensual overtures. The finale seemed a bit rushed, but I’m not complaining. It gave my favorite couple, the happy ending they deserved. Surely this isn’t the end but the beginning! Let’s hope that Director Petersen Vargas and Black Sheep continue on this winning streak and give us another undeniable romance in the movie version.