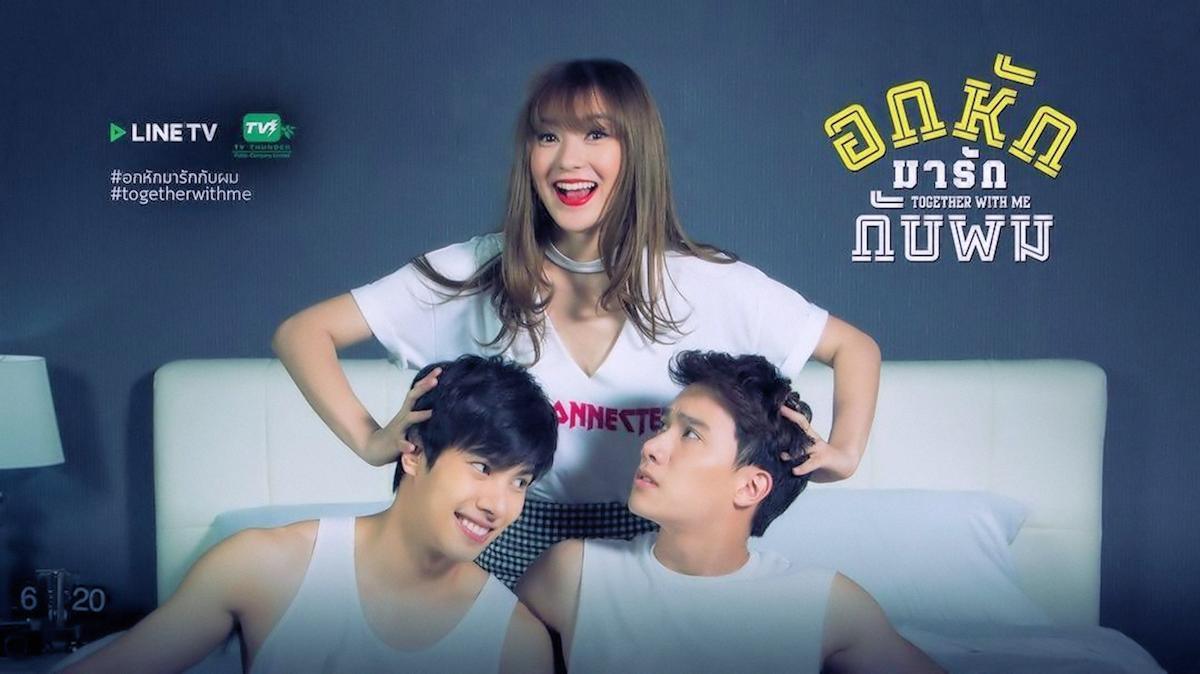 Together with Me (อกหักมารักกับผม) Episode 2 [Review]

Although I wasn’t quite as pleased with Knock’s prickly attitude in the pilot episode, his character graph got marginally better in the second. His character had major issues with his and Korn’s “wild night gone awry,” but the fact remains that they have been a daily fixture in each other’s lives. When friendship becomes a habit, it’s hard to break off. Knock’s issues about having “sex” with his best friend go beyond basic insecurity. But as they decide to let bygones be in the past, Korn’s decision to stay away from Korn results in major upheaval.

Korn and Knock’s attempts to act normal in front of Plern Pleng are successful, although Yihwa realizes that something is amiss. Our confused two best friends can’t stay away from each other, and they decide to bury the hatchet along with the truth. However, a nightmare treads into reality when Korn decides to step forward and protect Knock from undue consequences. Korn’s sudden disappearance from his life raises Knock’s hackles. Will Knock realize that his feelings for Korn go beyond friendship, or is he just missing an element from his basic comfort zone? How will Korn protect Knock and their treasured friendship?

Hiding secrets from the people in your life is quite a daunting task. More so, when one of them is your girlfriend (Plern Pleng), and another is your nosy best friend (Yihwa). Women are quite intuitive when it comes to digging up bones from the closet, so-to-speak, so I’m going to patiently wait for the upcoming mayhem until either of them figure out the truth behind Korn and Knock’s weird behavior. They are trying so hard to be “normal” that the guilt is plastered all over their faces. But despite that, I’m glad Knock showed some maturity and decided to talk things out with Korn. Although Knock’s obvious issues with being the “bottom” and his insistence to hide their “dirty secret,” might seem immature, at least he is ready to move on and forgive Korn. I have an inkling that these very words will come back and bite him in that tender ass.

Although both of them have decided to forget the night of sex, Knock seems lost and worried. Korn’s promise never to breathe a word about it should have put him at ease. Instead, he is plagued with confusion and guilt. Plern catches on, but Knock continues as though nothing is amiss. He knows how to deflect and escape. A guilty conscience is never easy to handle, so Knock might have to be ready with a pack of lies for future telling. It’s like walking through a minefield, expecting to be blown up anytime. From what I know about Knock, this situation will get extra messy, which will test his friendship with Korn yet again.

Nightmares often indicate troubles in our minds and and can send our peaceful existence into a spin. The same goes for Korn when he wakes up from a nightmare and decides that his world will end if he fails Knock. His solution to this problem is to avoid contact with Knock at all costs. I was really surprised that he gave up on their football practice to maintain his distance from Knock. Surprisingly enough, Korn’s disappearance makes Knock’s heartache for his best friend. He is appalled at the possibility of Korn getting kicked off of their team. This character really has so many subtle shades. When Korn was around, Knock avoided him like the plague, and now that the guy is nowhere to be found, Knock can’t stand it.

The sweet and innocent Farm meets the nemesis of his life – Dr.Bright. It’s love at first sight for the poor kid. Farm is instantly enamored, and you can see the interest sparkle in his eyes. While for Bright, Farm is just another notch in the belt. In the first episode, he flirts with the girlfriend (Pear), and now he is trying to charm the boyfriend (Farm). I’m guessing wherever he goes; Bright is leaving a trail of broken hearts behind him. Although not a huge fan of Pear, I’m already afraid of what will happen to Farm when Bright gets done playing his games.

The confrontation scene was so hilarious that I couldn’t stop laughing. Knock is pissed off, and Korn is doing everything to avoid him. To watch Korn run around their dorm premises like the hell hounds are chasing him was funny. These two are such idiots; they can’t stay away from each other but yet they TRY. Knock is done with this idiocy and issues explicit orders to return to the field. He will never admit that he misses Korn and his veiled threat is just an attempt to hide his emotions. Both Korn and Knock are slowly realizing their feelings for each other but denial is a strong emotion. Maybe Korn was the first to fall, but imagine the angst this romance would bring forth? I’m totally digging this slow-burn chemistry that Max and Tul have. It makes you yearn for more (in my case, I’m hoping they get between the sheets more sooner than later.)

The cat is out of the bag! I wasn’t expecting this to happen so soon. But Korn’s sudden avoidance is making Knock jittery. So much so that he unknowingly blurts out the truth in front of Plern Pleng. Although she isn’t exactly suspicious, Knock’s mistake will cause huge problems in the future. Plern is not stupid; sooner or later, she will catch onto the fact that something is going on between her boyfriend and his best friend. The resulting consequences would be disastrous if she decides to fight back. I also have a huge problem with the consultation sessions that Knock has online. It’s like laundering your dirty clothes in public. Why would you do that? Knock comes across as a majorly insecure and confused individual. He needs someone like Korn, who will bring some stability to his chaotic life.

Will Korn stop hiding and fight for the love of his life? Or will he back off to save their friendship? Will Knock accept to himself that Korn means more to him than their supposed friendship? Or will he lose his best friend and future love interest to a new competitor?

Keeping our promise to get your major updates about MaxTul’s upcoming drama “Manner of Death the Series,” today, Psychomilk brings you official photographs from the First Fanmeet on August 13th, 2020 via the WeTV Facebook Page. The entire cast of the show was announced and introduced. The cast members sure looked classy and dapper in their formal wear. Here’s bringing you a list of the actors and the characters they will play onscreen-

Keep watching this space as we promise to bring you more exclusive content!