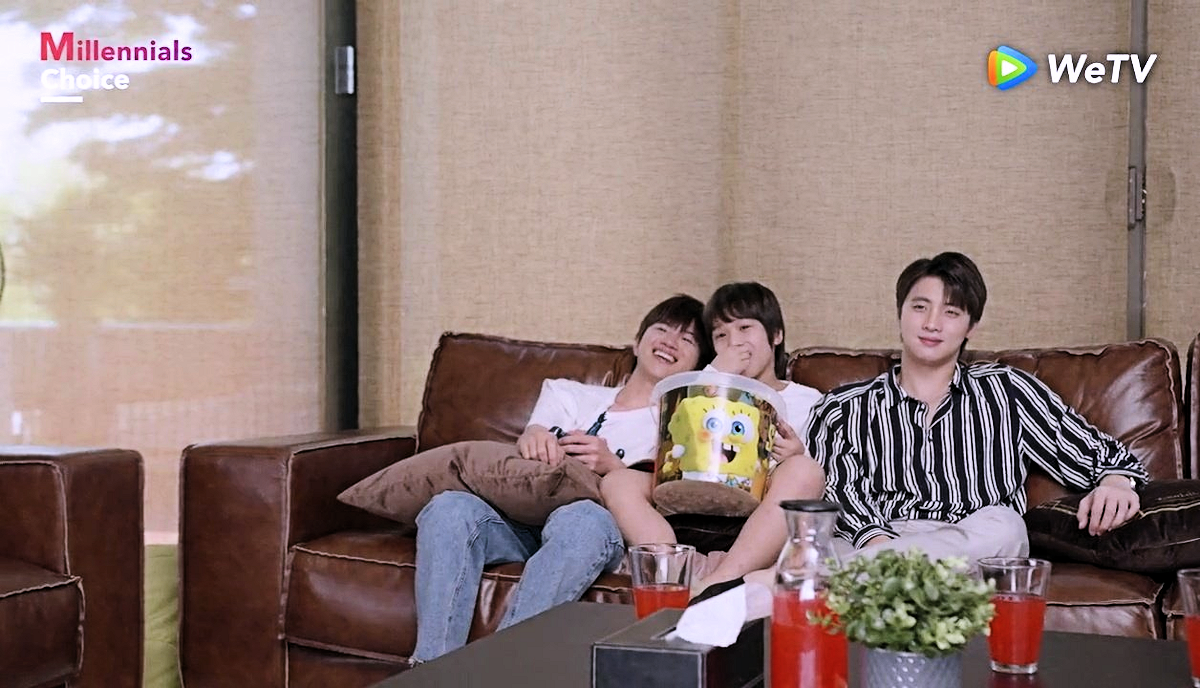 While we all have dreams of our own, there are a few who are born with a silver spoon in their mouth and still yearn for affection. I’m talking about Tin, despite being the heir to a powerful family; the one thing that has always been out of his reach is happiness. He might very well prefer to be a pauper with a loving family than live the so-called “rich lifestyle.” Fake people have always surrounded him, and Can’s honesty is like a breath of fresh air. When Can reaches out to Tin while he fights his inner demons, their connection sparks. Can is getting comfortable with their new developing intimacy, and that seems like a blessing to the lost boy who has stood in the dark all alone for a very long time.

Tin’s dream of “a happy family” might actually come true; if he can sidestep on the various roadblocks that continuously stop him from reaching his ultimate goal. While Tin is getting more closer to the surface, Can faces trepidation about his own overwhelming emotions. Tin is falling for Can’s innocence and honest attitude. While they continue to grow closer and adjust to each other’s odd behavior, silent storms are brewing, which might make or break their relationship. Tum and Tar are continuing their sojourn as stepbrothers, although the affection is more obvious now. Techno is facing his own demons as Kengkla’s insistent efforts are melting his resistance. Tin’s efforts might be thwarted as Tul learns about this new person who might be of importance to his ‘unruly’ brother.

Can’s obvious outburst is a welcome change for Tin. While his parents never believed him and his own brother plotted against him, Can is the first person who not only believes him but is also ready to fight for Tin. It’s bittersweet because Can is unknowingly helping Tin in his silent ways without even realizing the apparent importance of the act. For him, it’s as simple as protecting his own sister. He values the people in his life, and Tin is now a welcome addition. I was surprised when Tin leaned onto Can’s shoulder and Can didn’t get flustered or swat him away. Instead, he acquiesces to Tin’s pleas for attention. Despite the new dynamics, Tin is still afraid of his brother. His demands to not alienate Tul for any reason makes sense because you never know what the elder Medthanan might do. He is vicious enough to do virtually anything, brother or not.

At times all you need in life is someone to love or maybe friends who won’t leave you alone. In Ae’s case, it’s the latter. Ae is trying hard to get back to a new normal. He finds himself at home, hugging his mother, who now knows about her son’s break up. I’m guessing the same because as much as I remember from the prequel, his family didn’t have any inkling about Ae and Pete’s relationship. I love how Pond and Mai follow him to his hometown just to make sure that Ae is all right. Pete might be gone, and it may be a long time until Ae recovers from the hurt and pain, but his friends are trying their best to support him. I applaud their efforts, especially Pond, because apparently, no one else can handle Ae like he does.

The next morning brings new moments of relief for Tin. Can is on the edge thinking and worrying about Tin, which makes our arrogant main lead very happy. The way Can runs off of the pitch to make sure that Tin is alright is so endearing. He is still clumsy and loud, but Can is locked into Tin’s comfort zone. The one person who looks out for him and cares about his existence. Although they are still at odds with Tin’s insistent need to buy gifts for Can, I’m guessing it’s getting old. However, because Can is a die-hard “foodie,” winning him over with snacks is a sure formula for success. The added benefits of peck’s and cheek kisses just make Tin very happy. Can is still in denial or oblivious to his own feelings because I can’t help but laugh whenever he compares his emotions to poop. This guy is such an adorable nutcase.
Also, we have Kengkla still trying his luck with Techno. I’m not sure that I like Technic much because the kid is still out there, bargaining his elder brother’s virtue with his school friend. I don’t understand why Mame’s universe always has such morally questionable characters. Techno’s resistance seems to be melting away as it is evident from the way his eyes light up whenever Kengkla’s name is mentioned.

Never be said that Tin isn’t a possessive guy. Can is always begging for free stuff, and Tin catches him in the act while Can is pestering Techno. Tin gets the wrong idea about Can and Techno, so his jealousy quotient skyrockets. Only later, he realizes that Can respects Techno as his Captain and was being a freeloader as usual. So our wise hero chances upon the perfect opportunity and instead invites Can for a movie date. From Tin’s point of view, it is a date as he easily lures Can with the promise of Italian Cuisine for a sleepover. I don’t understand why Can is such a gullible character.

I wanted to watch the rehash of the scene where Can meets Tin’s nephew, Phupha. In the prequel, the meeting extended for a few minutes, where Can rebukes Phupha and is then himself scolded by Tin. However, in the sequel, the author has given a nice spin to this tale by having a whole day out with these three characters. Although Can rebukes Phupha at first, Tin’s affection for his nephew changes his mind. The whole scene plays out so beautifully because this is exactly what Tin has wished for his entire life. Watching the person he loves with his adorable nephew is a new experience for Tin and Mean Phiravich certainly nailed the scene. He portrays Tin’s happiness in a way that makes it relatable to the audience. They connect with him and hope that his dreams materialize. I enjoyed watching him look at Can and Phupha like his entire world was right beside him, and maybe they are. He doesn’t like his parents or brother, but he doesn’t hold any grudge against his innocent nephew. Watching the kid with Can gives him a new sense of calm and peace.

Their new intimacy doesn’t make things easier for Tin, though, because Can is reportedly still confused. I don’t understand why he allows Tin to kiss him or charge interest. Can still has doubts about his own feelings, and I understand that. While Tin has easily accepted his emotions, Can is still struggling with a simple mind block. That doesn’t stop them from kissing, and although the kiss was slightly sober than the one in the prequel, it conveys their emerging emotions. Many might have been disappointed, but I heard that Plan Rathanavit was unwell while shooting for this scene, and the kiss might have been shot as mellow one. Despite that, the important point remains that Tin declares his feelings and makes it clear that he likes Can. He has been doing the same thing for the last two episodes, but this confession has a finality unlike any before. He is clear about his feelings and is expecting the same from Can.

That brings us to the “Tum-Tar-Keen” love triangle. While Tum is overjoyed with Tar’s evident return for the holidays, Keen is still trying his best to make Tum notice him. I was surprised by his sudden interest in Ae’s profile and thought maybe he had switched interests. But that’s not the case, because as usual, Keen was looking for Tum’s positive response. I like this character as well as feel sorry for him. Despite Tum’s obvious affections for his stepbrother, Keen seems to be in love with Tum. Yet he is trying his best to help Tum without expecting anything in return. He would be left heartbroken at the end because Tar’s return would change the dynamics of their relationship. I’m looking forward to watching how this love triangle unravels because, for some reason, I’m rooting for Keen.

Now we move the scene, which will bring heartache to Tin. Can is confused and asks Ae for advice. Although Ae doesn’t give a straight forward answer, his deflection just means more confusion for Can. He has watched Ae fall apart after breaking up with Pete and doesn’t want to go through the same experience himself. However, that doesn’t change the fact that he is slowly falling for Tin. This fact explains his inherent need to hide when facing Tin, which our smart, rich boy catches on to pretty quickly. I’m already dreading the next week’s episode because I’m guessing that Can will finally reject Tin’s advances. I’m not sure if I’m ready to watch Tin go through another breakdown yet again. But the scene exists and will happen. I’m hoping that the show’s producers will be swift with the reboot and move ahead with the storyline now. I’m ready to watch the heartbreak if they promise me a coherent reconciliation.

Next week’s preview seems apparent as Tin’s classmate is seen proposing to him, while Can misunderstands the situation. Will he reject Tin, and as a result, they will grow apart? Will Ae try to bridge the distance between his friend and Tin? How will they reunite?