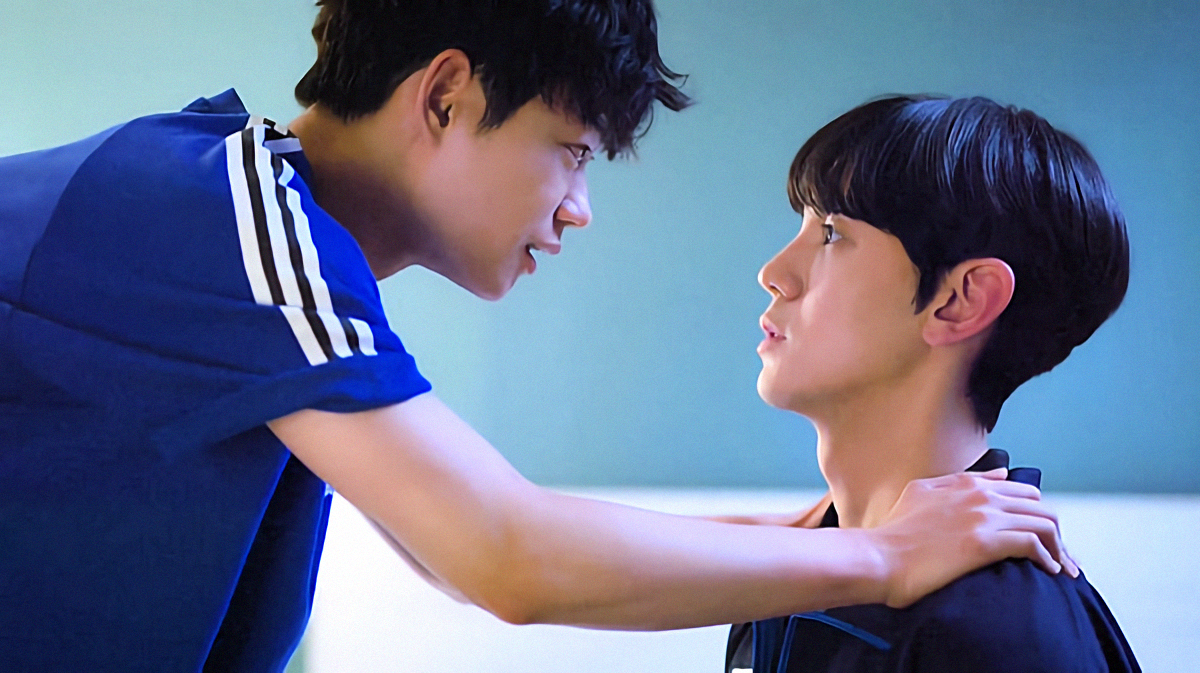 Despite the fact that things just never seem to go his way, Sang Ha (Lee Se Jin) always manages to find a reason to smile. A member of the school track team, Sang Ha loves to run, but distance has never really been his thing. Jin Won (Cheon Seung Ho), on the other hand, is exactly the opposite. A record-breaking marathon runner in high school, Jin Won is well on his way to becoming a marathon superstar. Jin Won cares about one thing and one thing only: running his next race.

Now that the confession is made, it was so good to hear from Sangha (again and again) that his liking is not to have anything in return from Jinwon but just to be by his side and help him run better. The writers gave us a mature and sensible character in Jinwon, who does not react badly to this (I would not have blamed him though). Even using the excuse of all the milk boxes Sangha has given to him, he does not reject Sangha’s feelings. I personally felt this was a good scene. Even when he subconsciously realizes he is avoiding Sangha, the next day, he still reaches out to him for helping with the upcoming race.

While Jinwon runs because he likes it and wants to perform best in the Marathon, he does benefit from money and freedom to pursue his dreams against his parent’s wishes. At the same time, Sangha’s dreams were shaped by looking at Jinwon since school days. The scene where he thanks Jinwon for making him smile and saving his life was so brilliantly written and shot. I felt so connected to Sangha at that moment. There are always people who unknowingly nudge us on the path we need to take in this life or have motivated us not to give up. Sometimes they seem so far away; sometimes, you can be around them when the time comes. That is exactly why & how Sangha feels about running with Jinwon and being his pacemaker. Even with his financial issues, he does not want to run for the money, but only to run for his love. Lee SeJin has given life to Sangha’s character, and he looks so damn adorable, I want to put him in a jar and carry his sunshine smile with me.

Episode 5-6 had a lot of scenes where Jinwon’s care for Sangha became apparent. Cheon SeungHo is doing a good job in his portrayal of this character who is a little confused about his feelings, is always kind and caring, and focuses on preparing for his upcoming race. His actions might not be perfect in execution, but his heart and intentions are absolutely pure. The show balanced the tension from Sangha’s scenes by some light-hearted banter within the team and the cute interactions of Sangha and Jinwon before and after the practice. Sangha never loses his smile when with Jinwon, and more and more, one can feel how Jinwon is truly his lifeline.

After Where Your Eyes Linger, I expected W-Story not to use the female character like a prop, and they did not disappoint. Hyo Ri is such a good friend to Jinwon, and she not only accepts Sangha’s liking as normal and helps Jinwon understand it better. This show has not used any character to call out the gays or hype it with fantasies. The story is treated as a usual romance story between two boys from different backgrounds and is linked to each other in ways more than one.

But the show ends by giving us more tears as we reach the dramatic part of Sangha’s story, and I can’t wait to see how it is resolved.  I swear to God, I would be outraged if they do not give us a happy ending for these two. I wanted to see Jinwon coming out of his low phase and to gain confidence, but now I am more invested in protecting Sangha from the bad guys in the show.

This series so far has such a comfort watch feeling. I love this pairing & the story a lot. It is not too intense, but the perfect fluff to make one smile.

Mr. Heart can now be streamed on the web entertainment site VIKI and on WeTV platforms as well.