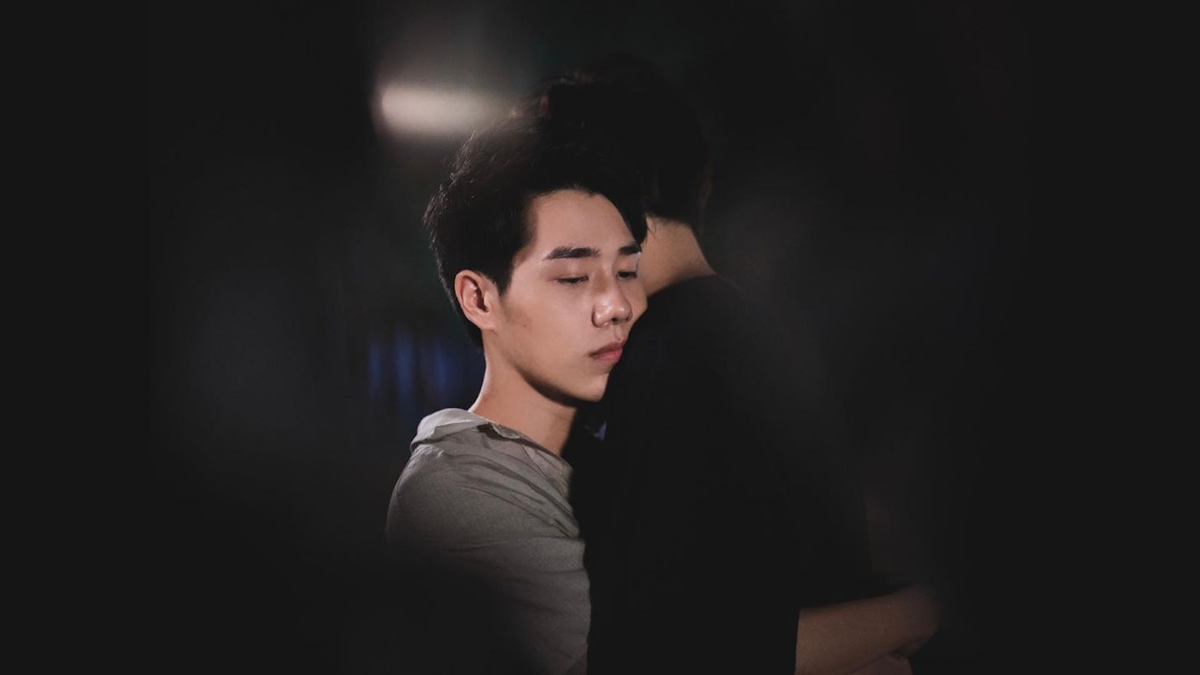 With Solo and Gui transcending the borders and moving in together, the story is pretty much moving at a steady yet unexpected speed. Phuri has given up on all pretenses and is slowly becoming more accepting that Kao isn’t going anywhere. He will stand by Phuri as Phuri fights his battles and support him. The “Khim-Petch-Perth” love triangle is getting more complicated by each passing day, as Petch spends a lot of time jumping through loopholes to maintain his unrealistic lies.

This review is a joint effort with my dear friend, Jenhg. You can see her thoughts on this episode on her blog. We had a really good time reading each other’s thoughts about the last episode. Let’s see what we feel about this one!

However, our resident calm Dr.Perth is at his wit’s ends because Petch is entirely oblivious to his feelings. While these three are trying to find a stable footing, Khem enters the scene to add an unexpected twist. Oh lord, save me, but this storyline keeps evolving in so many confusing ways that I don’t know whether to appreciate the romance or complain about the cliché!

Solo and Gui are enjoying the starting phase of their relationship, even though Solo isn’t exactly forthcoming about the reason for his sudden disappearance. As Beer unknowingly spills the tea about their future internship, Solo grows uneasy. So he proposes that Gui moves in, and they settle into an unlikely but early domestic life. Alarm bells ring when Jay, who works as a Secretary for Solo’s Father, calls to warn him of the consequences. Kao, on the other hand, gets roughed up by Phuri’s classmates. Phuri arrives on time, and finally, we see some cracks in his arrogant demeanor. Khim is trying hard to sail Petch’s and his mystery man’s ship. Only the ship doesn’t have another passenger and keeps rocking back and forth.

Solo and Gui have a walk, and just when I was expecting that our lost puppy would finally divulge on the details for his sudden disappearance, the show dives into the unknown. Although he must be dying to know the reason, Gui calmly promises his support, even when Solo is screaming at someone on the phone and all set to break the phone into pieces. I understand that Gui intends to give his new boyfriend space, but isn’t he even a little bit curious about Solo’s sudden temper tantrums or mood swings. Kao actually points out the same, yet Gui doesn’t think it is important enough to figure out the issue. Despite that, them sharing the same bed at night and Solo wrapping himself around Gui like a Koala Bear on the bamboo tree made me immensely happy. I guess I’m more in love with their romance than worrying about their current dilemmas (because when it comes to this couple, their problems never cease to exist.)

Phuri and Kao’s relationship, on the other hand, showed improvement in spades. After leaving us in some major drought last week, Phuri returns to save his favorite bunny from the assault by his classmates. The way he casually walks in, thrashes them, and throws out the “Stay away from MY BUNNY” dialogue, I literally jumped up and danced around. The announcement is so far a cry from his normal grumpy behavior where he grunts in annoyance at everyone. Coming from Phuri, this is literally a declaration of love! Phuri takes the injured bunny home and acts like a doctor. I loved their conversation, where you can clearly see the conflict playing out.

Phuri was avoiding Kao because he already knew that getting involved with him would be dangerous for Kao. Phuri has been alone for too long, silently fighting his battles, and is now feeling blessed because Kao is beside him. I love their relationship, and also the actors portraying the characters. I’m hoping we get another series with both of them, adapted from the novel “Nitrogen,” from the same series of books. In one of the recent IG Lives, Phubeth, who plays Phuri, hinted that, and I’m pretty excited about the possibility. If I’m getting more dialogues like these where Phuri asserts his ownership, what’s not to like! Boss and Phubeth have consistent chemistry, and I’m a huge fan of this pairing.

Solo on the other hand can’t stand being away from Gui. As such he proposes living together and I’m surprised that Gui actually agrees. Their romance is moving at a fast speed, but I’m guessing that’s just how they are. Some couples meet and it’s love at first sight, so living together seems like a logical conclusion. Although there aren’t many scenes where we get to watch them date or get to know each other better, Solo pretty much fell for Gui from the start. So, he just goes diving into the deep ends without thinking about the consequences or maybe he does. But Solo is the kind of guy who isn’t good at taking orders and just follows his heart. Their love story is a mixture of quite moments sprinkled with some solid awestruck chemistry that mostly leaves you bewildered or screaming for more!

They are certainly in the first stage of their relationship, so everything is new and candid. My only issue is that it seems too fast-paced. Also, Solo hasn’t revealed nor resolved the issue with his overbearing father. I’m guessing that this will come back to bite him in the ass at the most unfortunate time, but for now, watching them play house in Solo’s apartment is endearing. Every time I watch Supanat make puppy eyes at Petch, I wonder how they get done shooting any scenes. Supanat is so handsome; his screen presence leaves me speechless. I accept that I spent a lot of time just staring at him in wonder. As compared to him, Petch still needs to work on his expressions. But they do have viable chemistry, and that’s what counts!

This episode focused majorly on Phuri and Kao. The news about the incident spreads, and everything assumes that Phuri assaulted Kao. Kao gets handy with Phuri in public to set things right, and soon the photos are online. Kao’s Dad seems to be influential too because he literally scares the assaulter’s into resigning. Will we get to meet Kao’s Dad in the future, and what will be his opinion on their relationship? I’m enjoying this slow-burn romance because Phuri is more accepting of Kao’s advances. Although he knows that his bunny is manipulative, Phuri isn’t bothered about it. His worries are more centered on Kao’s safety. So, when Phuri calmly asks Kao to reconsider his decision and Kao immediately asserts that he will follow up on his promise, you can see the crack in the hard stone walls. Kao is pretty insistent and stubborn, so I don’t think he will change his mind. At least that’s what I’m hoping for!

That brings us to the obscure love triangle between “Khim-Petch-Perth.” First, Khim has no idea that Petch is consistently fooling her. Secondly, I have major issues with the way Petch handles things. Like inviting Perth for lunch and then clicking his pictures without permission is certainly irritating. I don’t understand why Petch is building this tower of lies. Khim seems fine, and he doesn’t need to continue with this farce. It’s annoying and grates on my nerves.
He keeps pulling Perth into this plan without explaining things or apologizing shows how little he cares about other people’s feelings. I feel sorry for Perth because he is stuck in a situation where he has to watch his love interest try so hard to please someone else. If Perth’s situation wasn’t precarious enough, Petch goes onto invite Khem for a movie date. It isn’t a date in his mind, but Khem is a teenager and is bound to look at things differently. Especially now that his sister has told him about Petch’s attraction to men! This situation is swerving out of control, and unless Petch stops with his stupid attempts, things will worsen, and someone will get hurt.

Just as Solo and Gui are settling in their peaceful world, Solo receives a call from Jay. Jay works as his Father’s Secretary and is calling to inform him about his Father’s apparent issues with them. Of course, Gui attends the call and is left stunned to know the details (this is why I was saying that Solo should have been transparent from the start). But since Gui is the patron god of peace, he accepts Solo’s ballsy excuses, and they put up a united front. Jay warns them again, which falls on deaf ears (Guys, seriously listen to him or ask for advice, this guy here knows how to handle Solo’s rich, snobbish Father the best. So stop being a fool and do damage control)

But of course, they are kids and are bound to make mistakes. So, for the time being, Solo’s Father’s problems are swept under the carpet, as Gui proposes to Solo. I admit I wasn’t paying much attention because my mind skyrocketed from the moment Solo entered into the scene wearing the towel. I mean, you really need to have live brain cells to wonder about things when Mr.Supanat is sitting there looking like delicious candy!

So while they were having a serious conversation about life and decision, I wondered whether they will get dressed so that I could concentrate on the issue at hand. Nevertheless, I’m glad that things are in the open now because it allows Gui to decide for himself. And obviously, he decides that Solo is the best thing to have ever happened to him!

As promised earlier, Psychomilk brings you some snippets from the Special Scenes on Roger Films Facebook page, only available for their supporters. This week’s special scenes include some cozy moments as Kao and Phuri share a bed. Our stubborn bunny coaxes his man and we finally get to see that beautiful smile on Phuri’s handsome face!