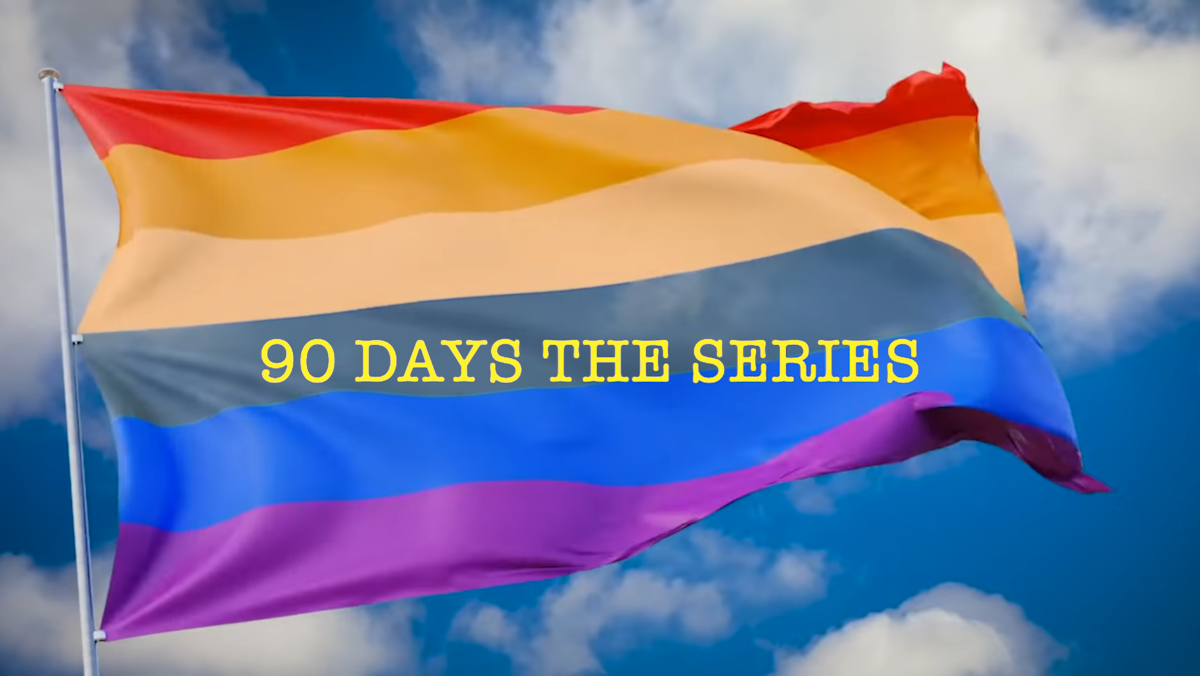 How do you get a happy ending when everything seems stacked against you? How do you make a relationship work in the face of adversity when all you want to do is love and be loved? 90 Days the series explores that and more. This series tells the love story of Greg and Axel. These two individuals want to be together, but having different beliefs, religions, personalities, and an unexpected HIV diagnosis might make it difficult for them to get their happy ending. I’m interested to see how 90 days tackles all these issues and the lessons we’ll learn about love, loss, and overcoming necessary bumps in the road to happiness.

Axel’s best friend and boyfriend comes from a religious family and is afraid of what his family will think if they find out he’s gay. He seems distracted and uncertain about his life and love for Axel.

Greg’s boyfriend and best friend, he loves Greg but is insecure about their relationship. He is proud of who he is and being gay and is trying to help Greg do the same.

The show also introduces other characters who guide the pair through the “stages in their relationship.” Friend groups can make or break a relationship/story for me, so it was interesting watching how these characters connected with the leads. Carla (Mhikee Samonte) and Trila (Juliana Mari Briones), both with incredible fashion and mindset, support their friend’s decision to love. Then the guys, Warren (Renzo Medina), Lester (Harold Ypanto), and Ricky (John Paul Bas), are typical.

Greg’s friends seem supportive except maybe (Warren), who I think they brought in to represent what some people in conservative society view on masculinity and how being gay cuts off your bloodline. It’ll be interesting seeing the different perspectives of each lead family and friends and their beliefs. I’m thrilled that Greg has that support.  I wish they added a friend group for Axel, but I’m happy to see Tito Ricardo (Paul John Hernandez) being there for his nephew.

90 Days The Series tells the story of Axel and Greg, two best friends with disparate beliefs, religions, personalities, and life stories, who fell in love with one another. They fight to prove that love knows no gender, that gays are no different than others — What happens when the secret comes out, and Greg is diagnosed with HIV? Will these two get their happy ending in and out of the pandemic?

My Thoughts on The Episodes

Before I share my thoughts, I want to say that I’ve been watching many dramas without watching the trailer or reading the synopsis. I’ve been judging everything by its cover. The posters for the series are pretty, especially the one on MyDramaList. I read the synopsis after seeing the posters. I was excited because it’s been a while since I’ve seen content where the main lead is HIV positive or has an STI, and it’s part of the storyline; plus, we haven’t explored living with HIV and dating or falling in love as much; especially in a BL. I’m not saying there aren’t any, but I’m happy that we finally see more.

Ok, so my thoughts, I like the opener where they show everyone’s pics, it’s an Instagram set up, and the pictures get 1001 or 2050 likes. Wondering what the significance is. There’s a spoken word speech at the beginning that someone in the comment section translated you can check out

Ok, the first three episodes could have been better.  The format was a typical pandemic/video chat style, and I love the dialogue, but the execution needs improvement.  Something is missing.

What I loved about Episode 1 was the dialogue between the couple, how realistic it was. Greg talked about his fears of coming out to his family. Greg’s family thinks they’re best friends, and his mom starts asking questions. He’s nervous because he’s afraid of being rejected by his family.

“Ay is not a disease for your family and people to hate you; be happy and proud”-Axel.

I really like Axel; his love Greg is beautiful. You can tell he not only sees him as a lover but as his best friend. He’s always there for him, so it’ll be interesting to see how or if the dynamics change once Greg receives his HIV diagnosis. It looks like Greg was cheating or used Greg “on the side” while he was with Patrick – who’s also in the friend group.  I want to see how Greg will deal with everything, especially since he already has fears of being rejected, especially by his extremely religious mother. Also, I think Greg is supposed to be the” tsundere” half of the couple, but it’s not working – like the acting isn’t working. I’m not convinced when Cuballes’ character is supposed to be annoyed by Axel’s actions. It just isn’t working for me. It’s like he’s trying to act as other actors who’ve had that type of role, but he doesn’t look comfortable.  Hoping it gets better, but at this moment, I’m not buying it.

The couple wasn’t in Episode 2 as much, which I understood because the series wanted us to focus on the people in their lives. I liked it because we get to see the friend group and their opinions. I like the dynamic of the group, and once again, the dialogue was on point.

I wish we’d gotten more ‘couple’ moments because the couple, mostly Greg, is distant, and I wanted to get a little more background from both of them and how they became a couple. Plus, seeing how they both would have interacted with Greg’s friends (Greg went to the restroom in Episode 2 and came back at the end) would have been an interesting mix, especially since no one seems to know Axel and Greg are together.

Needs improvement:   The scene in Episode 2 with Greg wanting to leave because he felt awkward could have been better. I forgot he was even there, and maybe that was the point, but the transition from him being there and him leaving because he felt uncomfortable or awkward just felt off to me. Axel saying goodbye, and cutting his camera, felt really out of place. You could tell none of them are actually”talking” to each other. It felt as if everyone filmed separately and turned in their clip.

We had some improvements in Episode 3. This episode focused on Axel’s fears about their relationship. Does Greg love him, or does he pity him?

There’s not much to say about Episode  3 other than a big improvement from the first two. I do like that Axel has support from his family, especially Tito Ricardo. It was great hearing Tito and Axel’s conversation plus Greg apologizing. Then we see a text from Patrick. As much as I enjoyed Tito Ricardo, I wasn’t as engaged as I wanted to be.  I still feel like something is missing from the episodes, but I don’t know what that is.

Tito Ricardo and his love advice were beautiful and saved Episode 3.

At this point, I like everyone but Greg. Axel could do better, but that’s not up to me; he loves Greg. Aejhay Espinosa is doing a great job portraying Axel. You can feel his love and heartbreak; I want to see more from him.  My one complaint is his makeup; it doesn’t fit his face, or maybe it’s the lighting, but it’s distracting. For Greg, I feel like the actor’s performance could be better; it’ll probably improve with each episode, but at this point, Brian Cuballes (Greg) acting is not working for me. The only way I can tell he’s “less than perfect” is because of the dialogue and how Axel expresses himself and fears about their relationships. I’m not getting anything from him, just other people’s perspective of him and who he is?

Overall, I’m not enjoying it as much as I thought I would. The dialogue and Axel are the only things keeping my ‘semi-attention.’ The transition scenes, the video chat parts, and acting are awkward and choppy.  At this moment, it’s in the “meh” stage. As it stands, I would give the series a 2.5, but I’ll rate a little higher because  I think the series may improve with each episode. Episode 4 looked intense, so I’m hoping it gets better.

Are you watching for 90 days? Let me know what you think of the series.

Note: Love how the group call is called SOTUS