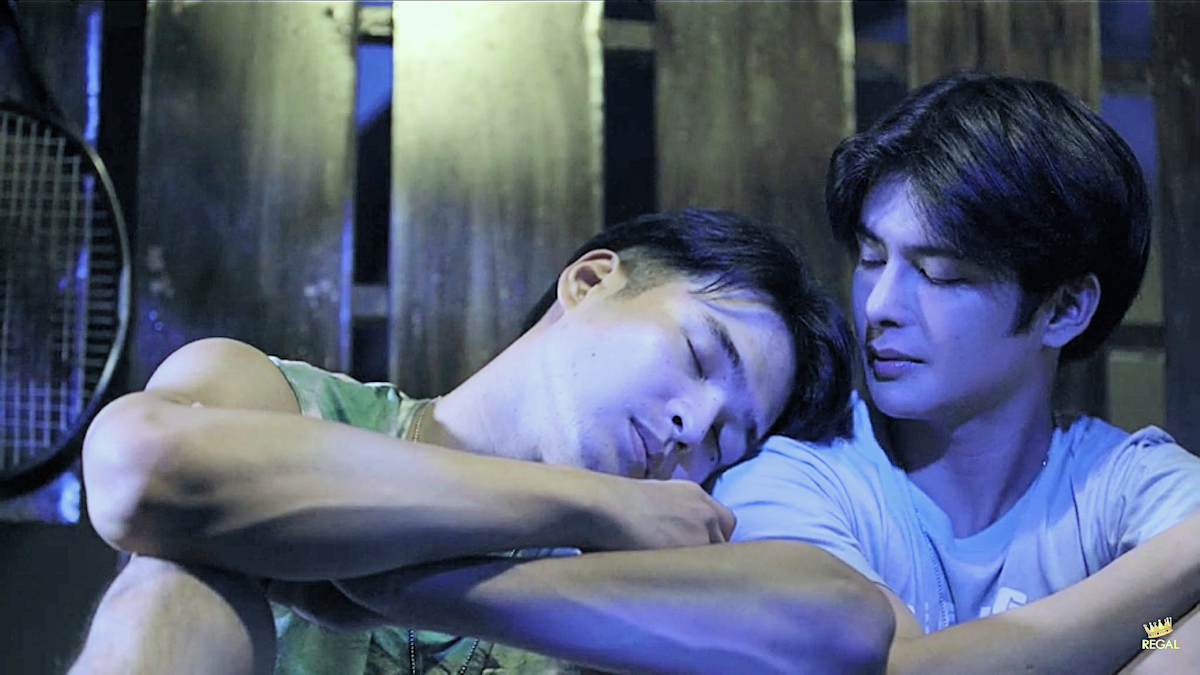 Now that our hero “Jim” has finally resurfaced and is face to face with Ben, it’s time to reminisce old memories and make some new ones. While Jim’s demeanor screams, “Flirty and Heartbreaker,” Ben can’t help but make heart eyes at his old friend. Good times tumble into bad when a slight misunderstanding turns into a major fight. Jim’s comment on Ben’s sexuality puts him off, and he turns the table by dragging Jim’s parental issues into the fray.

However, a past acquaintance suddenly makes an appearance, and Jim promptly jumps to defend Ben’s honor. I’m still in the “Bittersweet” phase with this drama; it’s total melancholy for me. The “Friends to Lovers to Strangers” reminds me too much of old things, and I’m pretty interested in watching how this love story plays out.

As Ben’s wish comes true, we finally get to meet Jim. He is flirty, audacious, and loves teasing Ben. They steal some quiet moments as they reminisce about old times. Jim shares his issues about his Father while Ben discloses his sexuality. Although stunned at first, Jim accepts the fact, and Ben seems happy. The next morning, Jim catches Ben drooling over him and teases him mercilessly. The teasing doesn’t end because Ben is prone to making a fool of himself. Jim catches him, recording a video, and Ben is left embarrassed. Tempers flare when Ben and Jim have a major fight, and words are tossed out. Both don’t want to apologize, and the housekeeper is at her wit’s end. However, Ben’s abusive boyfriend Leo turns up on the scene and watching the ex-boyfriend hassle Ben, Jim’s protective instincts come into play. He turns up the farce by proclaiming that they are both in a relationship. But is that a lie, or does Jim have feelings for Ben as well?

This question keeps resonating in my mind. Because as far as Ben is concerned, Jim is like a long lost dream to him! The happiness on his face when Jim finally makes an appearance is very apparent. They have an easy banter, and the friendship is still alive and well. It’s quite obvious that Jim is fond of Ben and hasn’t forgotten his old best friend. Ben, being snarky and unacceptable to the fact that he missed Jim, is hilarious. I have an inkling that maybe Jim doubts Ben’s feelings for him, or should we say crush? However, he keeps needling Ben about that point, and Ben keeps refuting Jim’s audacious claims. I love how Jim doesn’t mind pointing out the facts: “You were waiting all day at my home and even fixed our treehouse.” He certainly knows how to make Ben blush, and I love their natural chemistry. Teejay Marquez has a good screen presence, and frankly, I’m enamored with him. He keeps giving me subtle visions of Mico from “Hello Stranger,” but albeit in another adorable way! Ben comes up with the kind of lies to cover his attraction that are ridiculous and unbelievable.

The scene shifts to their old treehouse, where the friends have a heart to heart conversation. Jim shares how his father has turned disapproving after his mother’s death. He wants to try everything and be more like Ben (internal monologue – You have no idea that the poor guy has similar issues with his mother and is struggling to make ends meet). The conversation veers into romantic interests, and Jim is very much interested in Ben’s love life. Ben at first glosses over his past lovers’ names but after tacitly including boy’s names in the list, he finally reveals that he is gay. Although being momentarily stunned, Jim recovers and stresses that as a “Friend,” he will always support Ben. Ben understands his uncomfortable demeanor and accepts their current status tossing the word “Friend” back and forth several times between them. There is this underlying tension where it is obvious that Jim is thinking about Ben’s sexuality. As they get drunk, Jim leans on Ben’s shoulder, and they have a moment. But this “moment” is destroyed when Jim suddenly wakes up and stresses the fact that “Friends” should not be touching (instant facepalm).

The next afternoon is interesting. While Ben is doing this Live, Jim strolls to his window, wearing just a towel. Ben forgets he is on Live and starts ogling over Jim. Unfortunately, Jim catches him in the act and calls out to him. Ben retracts and doesn’t admit anything. These two are like “Tom & Jerry,” and I wonder if only Ben has these feelings? Because it seems that Jim is intentionally exposing Ben’s apparent thirst whenever he can. The next round is outside, where Jim is fixing his car. Ben walks in and starts to video record Jim. While Jim is modest about wanting always to learn new things, Ben needles him about his conquests. Jim turns the tables by listing Ben’s lovers instead. I love their snark, also the fact that Jim knows Ben is filming him. Why do I feel like that the attraction is mutual?

The battle begins. Ben gets miffed and uploads the video on social media. Flo watches the video and correctly deduces that Ben uploaded it. However, I agree with Ben’s opinion here; just because he is gay doesn’t mean that he will fall for his straight friend. It’s clear that his statement about gay men facing such biases is acceptable, and Ben has every right to be angry. I’m not endorsing the fact that he uploaded Jim’s video without his permission, but I understand his anger. Like most guys, Jim seems to gleam the surface instead of trying to understand his friend’s mindset. Their banter takes an ugly turn when Jim comes to ask for Ben’s WiFi password. Ben accuses him of being politically incorrect, and to some extent, I agree. But I would have preferred that he didn’t hurt Jim by callously pointing out his father’s disapproval.

The situation gets out of hand when Jim bakes a cake and takes it to Nanny Elma. She has no idea why these two kids are so snarky. The two of them continue to hurl abuses at each other. It’s so childish (Internal Monologue – Jim stop being an idiot and accept that your friend is gay; Ben, stop hurting Jim’s feelings by dragging his father into the mess between you two). Just as Ben storms out, Jim looks at his WiFi password and deciphers it as “June 6, 2015”. For some reason, that date seems important because Jim is left stunned.

The situation takes a 180° swing when Ben returns home to find Leo, his ex-lover lurking outside. He tries hard to convince Ben to come back to him.  It’s clear that Leo is drunk and also abusive. First, he tries the gentle approach, and when that doesn’t work, he hurls abuses. The guy is a sociopath, and he attacks Ben’s self-esteem. Jim arrives just as Leo is cursing Ben, and then Jim lies, saying to Leo that Jim and Ben are in a relationship. Ben is as surprised as I was.

I keep thinking: “You weren’t comfortable accepting his sexuality until yesterday, and now he is your Wifey?” I understand that Jim is putting up a farce to support Ben, but I have obvious issues with him using the term “Wifey.”

This moment is why Ben calls him politically incorrect. Ben is a man, not “Wifey.” As a side note, in our society, we need to get over this tendency to use a title like this when referring to one ½ of a same-sex relationship – it’s gauche and stereotypically insulting to the aggrieved party.

The episode ends with a grateful Ben staring at Jim with heart eyes! I’m not sure why Jim lied, but I’m guessing this will bite him later in the ass!

Jim obviously didn’t think this through before making the grand proclamation. The question remains whether he did it to help Ben, or is there actually an inkling of truth to what Jim said to Leo. Does Jim truly have feelings for his old friend? However, in the next episode, we have Jim’s supposed girlfriend visiting him and I’m afraid how this news will affect Ben and Jim’s already fragile dynamics?

Keep watching this space for more updates as we promise to thrill you with fresh opinions on this drama!