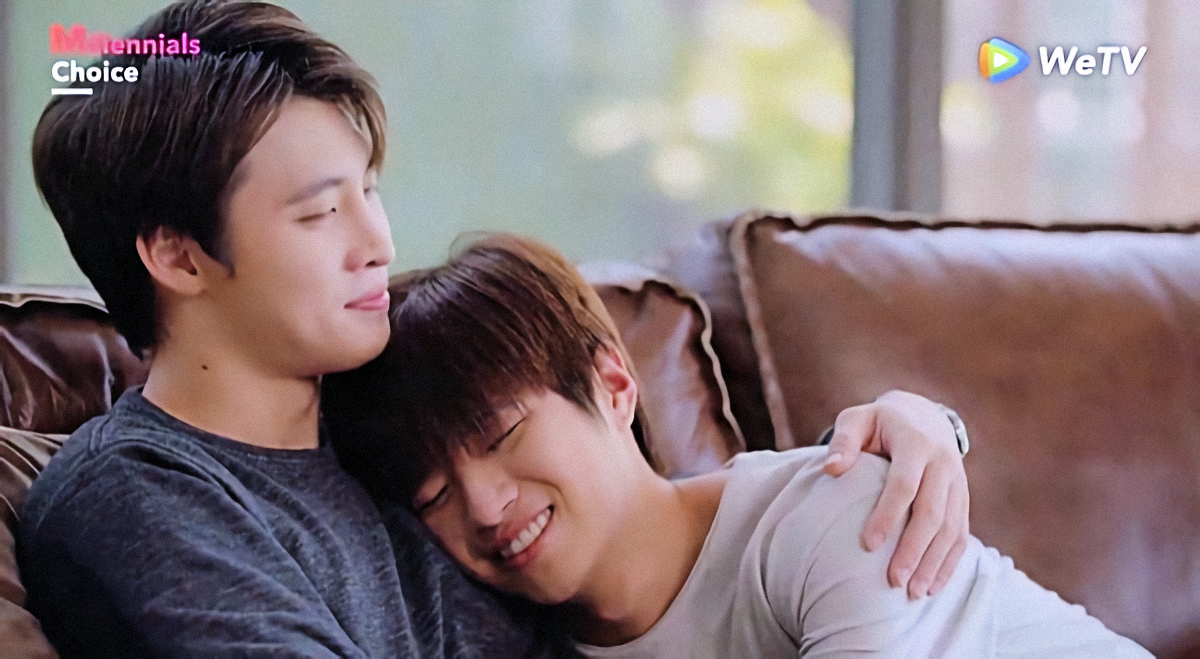 After last episode’s conclusion of Tin and Can becoming a couple, everyone else deals with losing the soccer championship in various ways. While Tin and Can are having romance, Techno is rejecting Kengkla over his lies. To make Can feel better, Tin makes love to him. Afterward, the two discuss what Tin should call Can since they are dating. Lay refuses to believe Tin could ever date someone not on his level and expresses this to Can. Can upset by her callous words goes to Job for advice. In the meantime, Tul is determined to learn Can’s identity. The episode ends with Can proving who he feels Tin should be with.

Words have power is an old and true statement. That notion is the driving force in this episode of “A Chance to Love.” It’s interesting the emphasis the episode puts on words as we watch the start of Tin and Can’s relationship. It’s a kaleidoscope of views from the people closest to them. Sometimes it’s themselves looking at each other without the rose-colored glasses lovers have at the beginning of a relationship.

Beginning right after Episode 7 ended with the players of the soccer game mourning their defeat. Everyone goes off to lick their wounds. Kengkla appears to comfort Techno; I’ve accepted this late-game dramatic storyline for them. So watching the pair have an intimate conversation was interesting. It’s obvious that Kengkla believes Techno needs his support to get through this loss. He was told earlier to give Techno time but still invades his personal space to give Techno a hug. This moment is highlighted by a slow-motion instant replay, which I felt was unnecessary. I don’t think viewers needed this added level of filming as it doesn’t do much for the scene. Instead, it’s jarring and takes away from the impetuous of the action altogether.

It’s fairly apparent that Kengkla is manipulative and Techno no longer trusts him. So when Kengkla says he loves him, he is physically pushed away as Techno says with newfound confidence, “That’s a story for another day.” The double meaning sinks in by fantastic acting on Mark’s part. Techno is always nice in the end and thanks Kengkla for comforting him but ends the exchange by expressing his anger at being raped and lied to — completely justified even if it’s five episodes late.

Can is upset and reverts to acting like a displeased child while at dinner with Tin. Tin patiently watches Can grump about the game and, with a level of godlike patience, waits him out. The moment is cute and well-acted by Plan and Mean. Seeing Can express himself and why he is sad, followed by Tin placing a hand on his and Can not pulling it away, is a sign the pair are getting closer to one another. Can has the idea that if Tin has sex with him, he will forget the loss. Whether Can is serious about this instant gratification method for dealing with grief or just being manipulative crosses Tin’s mind. Mean, as Tin studies Can, weighing the option before declaring it nonsense. Their exchange here is comedic and so well acted.

The actors have come a long way from “Love By Chance” to deliver such lines while using gesticulation to emphasize their words. Their body language, tongue, and cheek retorts had me laughing as Tin gave in. This moment is one that probably made any readers of the original book giddy. It is perfectly realized on screen. Mean has a way of bringing Tin to life that just feels natural, and I don’t think any other actor could appear so in love and, at the same time, completely done with Can’s bullshit regularly.

Tin brings Can to his home, and I scratch my head at this decision. The only logical reason I can think of doing this is his absolute indifference to his family knowing what he does. While he and Can shower before making love, Tul returns. Tul’s continued presence on this show has baffled me ever since his first appearance. In the book, Tul is a man who’s into BDSM, but on the show, he is nice, gentle, with a repertoire of clever wordplay, but not much else. This underuse amounts to a waste of a good actor to me. All he is doing is providing those simple one-liners to anger Tin – that’s all he does. For comparison, in the book, he oozes sexuality and control over the character Hin. In this series, the character has been minimalized into a doting father who lives, it seems, to torment his stepbrother. Additionally, it seems to me that he is only included in the series to spark attention and nothing else.

But as he learns his son went out with family, and he is alone with the maid, he attempts to ask about Hin. His mother appears at that moment, shutting down any mention of Hin. Tul slickly brown noses her while letting her talk. She explains about Tin’s friend, and he clearly is making mental notes of everything he hears.

When Tin and Can come out of the shower dressed in their own underwear styles, the scene feels stereotypically tailored for their sexual positions of top and bottom. Both are shirtless, though Tin (top) is wearing nice cotton looking Pajamas bottoms, while Can (bottom) wears pink shorts. Maybe by the end of this century, people will stop obsessing with heteronormative traits applied to a gay relationship. Honestly, LBC2 perpetuating stereotypes is the main draw for a lot of people. They understand the trends that go into it and know what to expect, as it clearly draws on YAOI tropes for so much imagery –  mainly because the creators are playing it safe and not taking a single chance with it. There isn’t much to it with the main characters, so I, as a fan, look at the potential in the wasted side characters instead as a reason to keep watching.

Fans have worried over whether Tin and Can would kiss the way Ae and Pete did in the first series. Mean and Plan bring it with real passion. However, this love scene is oddly tame after the kiss they had on the pier but still lovely all the same. What mattered more to me was the intimate dialog before. It felt like they were promising with words and sealing it with their bodies. Then creeper Tul appears.

Pressing his palm to the door where the two men are making love behind it, he delivers another ominous threat they can’t even hear, so why say it? To be super creepy and menacing for no one to see again. It’s like the dude is a megalomaniac and wants only himself to know how clever he is. Tin and Can have very “interesting” pillow talk before Can wants round two. Magically Tin is asleep, and it’s so cute.

The next scene involves the team and Kengkla, now drunk on campus, promising to win next year. Techno will graduate and passes the torch to Ae. They take a selfie, and Ae privately posts it online while speaking to Pete, who isn’t there. The show cuts back to Tin and Can for the morning after done right with the simple piano melody that has become the show’s central music theme. I personally enjoyed watching Tin explain to Can what lovers are, what making love is, and his desire to know what they are to each other. This becomes an inside joke for the remainder of the episode. The writing for this episode and Mean’s facial expressions are outstanding in this episode. Can’s infamous bad mouth scene is brought back where Tin tells Can to watch his mouth or get no lunch. Can flips the script and turns it sexual until Tin stops him. So cute! Unfortunately, the episode doesn’t stay cute as Can learns that his sister believes that Tin should be with someone as hot as Tin. This becomes the episode’s plot as we see a montage of Lay talking about it and Can getting more and more annoyed.

Seeing Can agonize over people’s views about Tin but forgetting himself in this equation was depressing because I don’t understand how the character who had the most stability emotionally. I was surprised he was insecure because, honestly, he was never this way before. It has become a trend for this show that it seems to change how the characters are with little to no warning. Tin was unphased by insecure Can; instead, he seemed turned on by Can calling him Daddy.

As we continue this alternate universe where things are sweet and cute but not logical, Lay and Chompoo are at the soccer field talking to Ae. Now bear in mind, Ae personally never had an issue with Chompoo but was fully aware of her crush on him. The two girls act as candy strippers to make sure Ae is alright when Tin and Can show up. Can drags his sister away; as to why is never explained, but Lay launches into another sister shipping of Tin, and he is amused. That is until, in a poorly done scene of what I guess is mounting tension, Can breaks and kisses Tin in front of everyone. I don’t know why I was surprised to see the triple-take this show uses too much, but I still was. And that ended the episode.

This episode was both really well done and simultaneously really tedious. The concept of everyone besides the main characters having next to nothing to do made sitting through their scenes extremely boring. It’s clear by now that the two couples for this season are Tin and Can and Kengkla and Techno, but they are barely showing Techno and Kengkla. So when their melodrama finally happened, it was forced and out of place. I don’t even understand the point of including the drunk soccer team since you never learn half of their names or see them on the field. I didn’t realize Champ was Champ until Techno said his name today. Tul’s whole presence in this show thus far has been to be menacing but does next to nothing. That would be fine if it actually went somewhere, but we are on Episode 8, and besides creeply talking to the air, standing outside by the door, where his brother was having sex behind and talking to air, the man has done next to nothing.

The sad part is it’s not just him. Most of the cast of this show has spent the last eight episodes doing next to nothing, and it’s confusing because they had a lot of great stories that could have been told. However, most have been sidelined this time, which brings me to the good, that is, Tin and Can. These two having more than half the episode to kiss and bicker was nice. Mean, and his many faces were showing his displeasure or love at Can’s antics. Can being either horny or sincere was a welcome change after the past seven episodes of being whiny and rude. Even their story was consistent and not random, like the rest of the cast. I sincerely wonder if the rest of the cast is there to ensure that it’s a sequel when it doesn’t feel like one or have some other purpose.