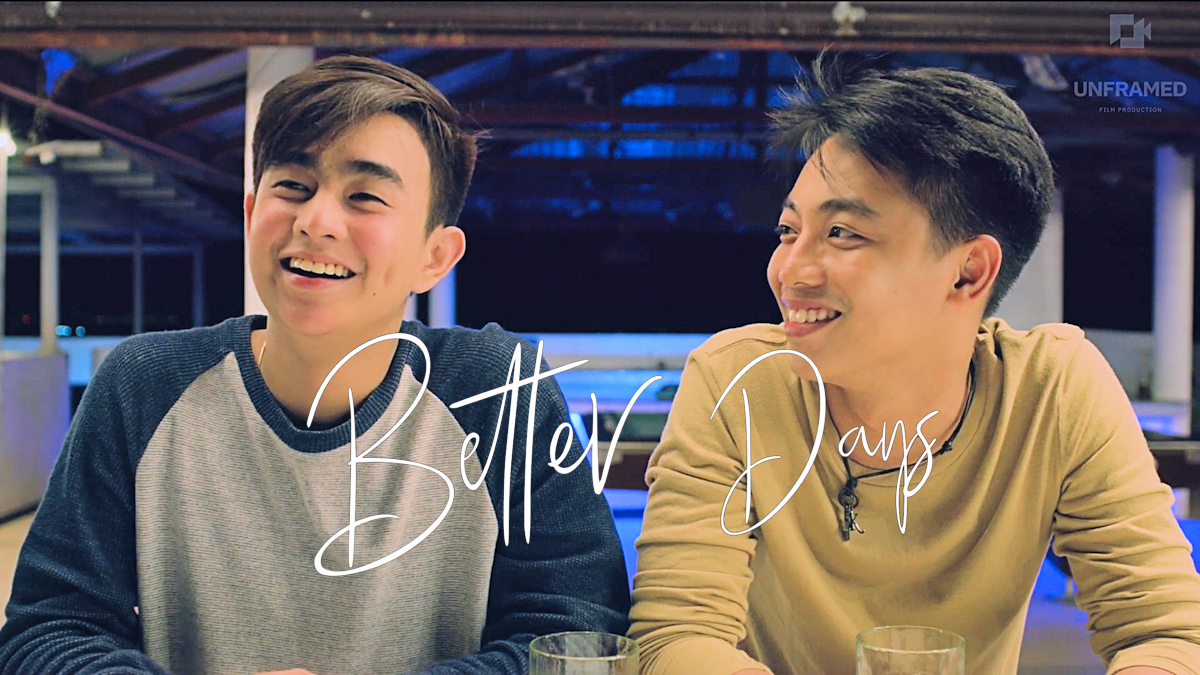 Directed by Carlo Obispo comes the Pinoy BL web series “Better Days” available via YouTube at the UnframedFilm channel. This series tells the story of Kian and Aron as they work together to bring back to life a failed restaurant. Along the way, childhood friends who are now strangers to one another grow closer.

Wealthy and adorable Vlogger Kian is played by Cheshter Chua, a YouTube celebrity and Vlogger in real life as well. This show is his first series. Chef and farmer Aron is played by Benedix Ramos, who also is a Social Media Influencer and YouTuber himself. Benedix graduated from a Hospitality University before the filming of the series. The pair bring a lot of their experience to their roles as the entire first episode stars only the pair of them, and they do a great job.

Kian drives through the Philippines forests on his way back to a childhood vacation spot to breathe. Before the scenes in the episode, he and his father fell out over his chosen college career paths. As he tells his subscribers via Livestream, he is returning to the person he loves the most. He plays a prank by pretending he doesn’t know who Aron is.

Aron, who is both overjoyed and confused at Kian’s return, dutifully carries his luggage up to the room he will be staying. Over the course of the day, Kian comes clean about remembering Aron and the two reconnect through opening up about what they missed in each other’s absence.

The credits bring back “Sakristan” vibes during the opening scene as we watch younger versions of Kian and Aron playing. From the first scene itself, the high production value for the series is evident from the high definition picture, the expansive views of Casile’s lush tropical environment, a province in Laguna, Philippines. It is clear that money was spent on this series as everything one sees has a splendor. Everything in the series looks stylish, from Kian’s clothes to the brand new looking SUV he is driving. Along the way to the vacation spot from his youth, we get a first impression of him as a self-centered person who just wants to have fun. The idea to pull a prank on the person he loves felt a little mean as the two have not seen each other in years even if to him it was just a bit of fun.

With an almost magical song playing as Kian drives, we cut to a hot kitchen to see the hard work going into the meal Aron is preparing for Kian. The scene cuts back and forth between the two men giving us a good sense of their personalities and the differences. The determination in Aron’s actions versus the playfulness of Kian, showing two distinctly different personalities. As Kian begins playing his prank, I loved how Benedix acted his role as Aron. Seeing his wordless excitement at seeing his childhood friend after a decade turn to visible disappointment and confusion was so convincing. It takes an appreciable skill to convey a change of emotions without dialogue, and watching him wait patiently for Kian to put his camera down and acknowledge him shows it.

Kian plays naive and, instead of taking up his own bags, leaves them there for Aron to carry as if his servant. This arrogance personally rubbed me the wrong way, and I hope it was only to play the part for his prank well. Watching Aron try to get Kian to remember him was so sweet, and Kian almost gave up but managed to stay in character in the end. Cheshter’s acting comes in just as good as Benedix as Kian’s phone rings, and he answers his mother’s call, and we are given a glimpse into his back story through the conversation. The mother worries about his relationship with his father, who wanted to see him before leaving. All the playfulness from Kian vanishes as he turns into a man who has been hurt emotionally. Ending the call, he heads down to dinner with Aron and summons the one trait that I am growing to despise in the shows.

For some reason, in these BL series, one of the two mains is rude and ungrateful to the point of insulting their future lover or boyfriend, and it drives me up a wall. While eating, Aron opens up about what he wants out of life, only to be inconsiderately insulted and made to feel like an inferior person by the very man for whom he worked so hard to cook. I don’t know why this harsh dialog is happening in so many shows these days (Gameboys, Hello Stranger, Why RU and TharnType come to mind), but I wish it would stop. The camera angles chosen in the edit for the prank ending/eating scene were a bit jerky as it cuts from one view to another without warning. Overall, the impression that they are like strangers now became apparent.

Over a game of pool, the two reveal more about themselves to each other. The father that emotionally hurt Kian is Aron’s sponsor while he was in college. Aron’s good grades made Kian’s father proud of him, which bothers Kian as his father has never felt proud of Kian for anything. All this was acted very well by the two men, who are the only characters revealed in this entire episode. Watching Chesther display envy, sadness, joy like a kaleidoscope being spun was impressive, while Aron remarked on how his father felt about Aron.

Benedix’s Aron timidly admits that he wants to take culinary and not agriculture like Kian’s father wants, which gets another condescending response from Kian. The emotions that crisscross Aron’s face during the exchange speak louder than his words, and I am grateful Kian notices that and lightens up. Aron has lived alone in this home for a long time and is trying to be happy his friend is back, but Kian is not making it easy by being a jerk.

When liquor comes, the walls tumbling down, and in the final scenes of the twenty-minute episode, a bottle and two glasses appear, and within minutes Kian is drunk. If you think it’s heading toward a drunken hookup, you’re mistaken. Instead, Kian opens up about why he is there – every insult he threw at Aron, it turns out, was originally tossed Kian’s direction by his father. It’s still not an excuse for Kian’s boorish behavior earlier. There is no excuse for being rude to someone. However, Aron is more concerned with how drunk and cute Kian is and calls him “Naughty Boy,” which made me swoon a bit, I admit. I was almost expecting a kiss at the end when Kian asks, “Are you tricking me?” The last scene of the episode is of Aron, happy to have Kian back in his life.

The night’s ending sums up how the entire episode felt to me. I found myself wondering if this is it? Is this the show that claims to be the show that changes Fridays in its viral marketing? If you don’t like the characters in the first ten minutes, you’ll be bored by the end of twenty minutes as they spend most of it talking at each other as opposed to each other. What could have been a fun banter or a match of personalities fell short for some reason.

It’s clear the director and writer wanted to show these characters as two halves to complete each other, but the actual episode doesn’t give a solid reason to see them do it. They didn’t have much chemistry, based on how they interacted, and I wonder if this will actually be a BL series or just two friends trying to fix one another. If it is the latter, I won’t mind. I’ve never said an episode was too short before, but at just twenty minutes, they could have used it better or shown more than just a near-constant stream of conversation. In the next episode, I hope we’ll see more about the characters and let their actions speak more for them, and take the story forward.