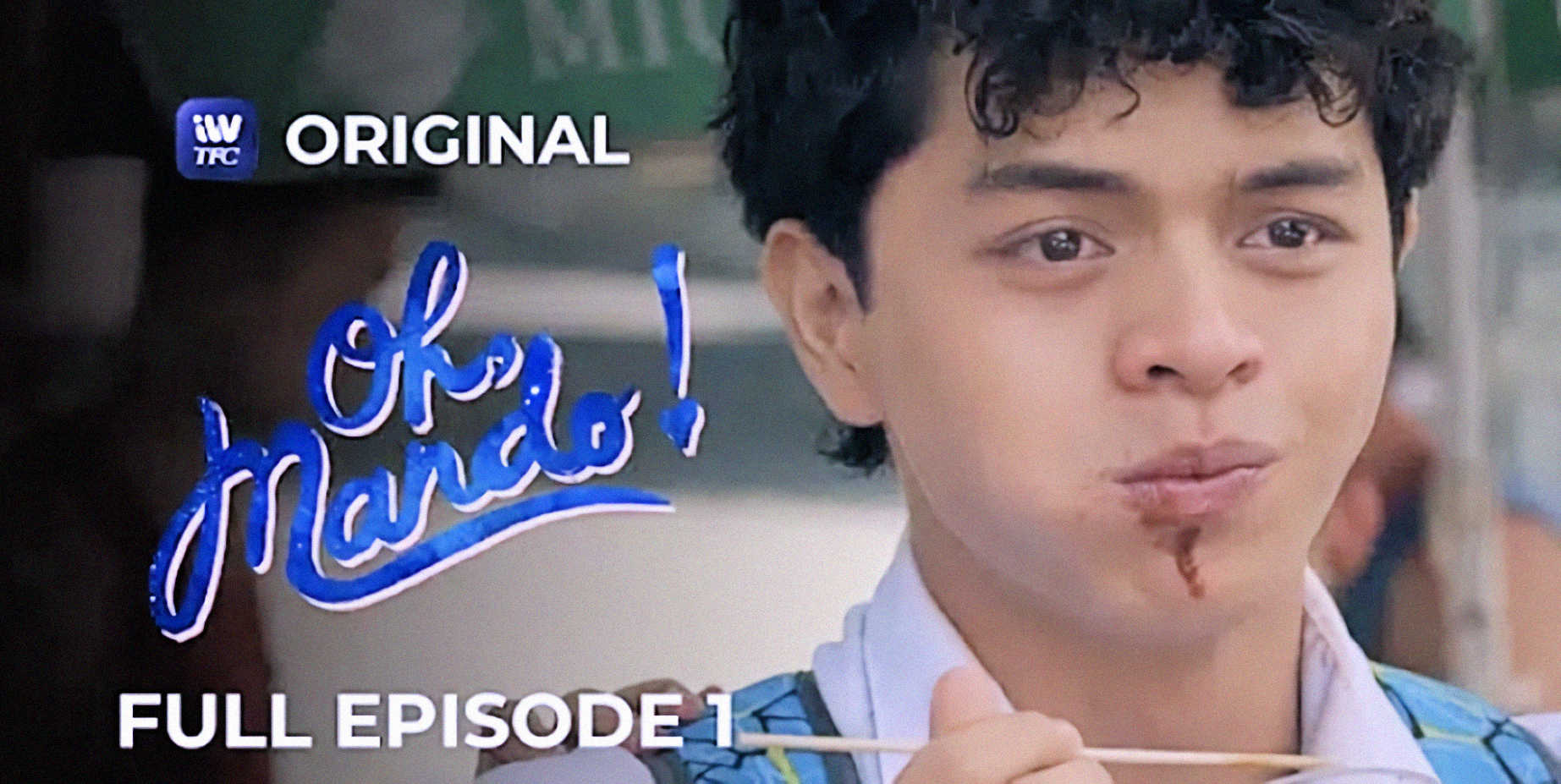 I must admit that I had my prejudices in full force when I heard about this show. Honestly, the only reason I’m watching this new Pinoy BL is Kokoy de Santos, my golden curly-haired boy wonder from “Gameboys the Series.” However, as we all know, it’s wrong to judge a book by its cover, and “Oh Mando” just proved this theory correct. Set in a ‘unicorn universe,’ this show borrows heavily from the text and idioms in fairy tales. So much so that you wonder if Mando will get his “Happily Ever After” with his very own Prince Charming. The pilot episode was intriguing enough to hold my attention and bask in the raw sensual chemistry between the main leads that is scorching hot.

Of course, there are deterrents like a father who wants his son to be manly and an annoying female interest who doesn’t understand the meaning of “No.” But what is life if you don’t battle your way to the heart of your desires? Director Eduardo Roy Jr. of “Fuccbois” fame has left no stone unturned, turning the premise of college student Mando’s struggle of denial and self-acceptance into a magical experience.

Oh Mando opens with an interesting dream sequence depicting Mando’s (Kokoy de Santos) confused attitude towards his apparent attraction to the same sex. Although he is intrigued, Mando is also quite afraid of his father’s mandate that Mando maintains a “manly” demeanor. On the day of his auditions, Mando bumps into a possible love interest, Barry (Alex Diaz). Although Mando is pissed at first, Barry’s gentle manners make him feel an overwhelming attraction towards the handsome stranger. While he is still puzzled by this attraction, Krisha (Barbie Imperial), who is auditioning for Juliet’s role, makes her intentions clear. She wants to date Mando, and there is no way he can escape from her clutches. Mando coincidentally meets the stranger again, and sparks fly. Slowly he realizes and accepts his attraction to Barry. They get along well, but unfortunately, Mando is faced with a brutal reality: Barry has a possessive boyfriend and isn’t single to mingle.

My Opinion on This Episode

In a most ridiculous adaptation of the fairy tale of “Rapunzel,” from the Brothers Grimm, the latest of many adaptations of a Persian tale, we have the opening scene with Kokoy playing the male version of Rapunzel. This one is pessimistic and doesn’t believe in love. So when Prince Charming comes knocking on the door, Mando steadfastly resists his charm. The entire conversation is so hilarious that you can’t stop laughing. As the Prince, Alex Diaz makes an admirable effort to convince Rapun ….. Mando that they are “meant to be.” Kokoy’s expressions are so spot-on that I couldn’t help but compare them to his audacious energy in Gameboys as Gavreel. Two entirely different roles, and yet this guy never fails to amaze me with his acting chops! Prince Charming’s pleadings fall on deaf ears, but once he decides to leave, Mando quickly acquiesces and allows him entry. No story is complete without the chance “Kiss” as Mando notices the scar on Prince Charming’s right hand. The attraction is mutual, and I’m sold.

That’s where the dream ends, and reality strikes with a vengeance. As Mando introduces himself, we learn that his father owns a hostel for Boys. The college boys are horny and fooling around. Gabo (Sam Cafranca) gives Mando an early morning fright when he pulls his roommate’s towel, and Mando is subjected to the glory of “Big Unicorn.” I laughed out loud. I have already mentioned heavy usage of fairytale idioms, and I’m enjoying the double entendre. Although Mando firmly dismissed any notions of being gay earlier, being presented with the evidence leaves him stunned. He can’t disguise his desire nor accept his feelings. His father expects him to be a man, and Mando acquiesces to this supposed fate. His inner ramblings are confirmed when Armando Sr argues with his friend about Mando being possibly “gay.” Armando Sr doesn’t even let his friend complete the sentence and declares that his son is a “Real Man.” I’m guessing this is the main issue in every teenager’s life when faced with the ramifications of their sexuality if different than expected. First, they find it difficult to accept it themselves, and secondly, the most dominant hurdle is the parental units’ understanding and acceptance. Parents need to accept that “being a man” doesn’t have anything to do with your sexual orientation. It has more to do with his character and nature. A person can be oriented to any sexuality, but what counts is their ability to be humble, respect others, and to love selflessly.

As Mando rushes to his auditions, a handsome stranger bumps into him. Although Mando is annoyed with him and brushes off his concern, he notices the scar on the stranger’s right hand. The scar is quite similar to the one on his “Prince Charming’s” hand. The similarity leaves Mando wondering as he stares at the stranger, who, in turn, keeps staring back at Mando. The stage is set for this romance as Mando ponders the possibility that the stranger could very well be his “Prince Charming.” At the end of the audition, college mate Krisha questions Mando why he constantly avoids her. (BTW, I have major issues with female love interests who won’t take “No” for an answer) Krisha makes it clear that Mando will have to accept her as his girlfriend sooner or later.

Indeed a small world, because Mando meets “Prince Charming” again at the street shop. I really like Mando’s friend Vince; he is so flirtatious and extra. Vince is like a direct flashlight exposing Mando’s inner turmoil. While Mando is left at the crossroads battling his desires and denial, Vince makes things easy for his friend. The stranger wants to treat Mando and his friends because he feels guilty about breaking Mando’s inhaler. The attraction is obvious, and it isn’t one-sided. “Prince Charming” might feel guilty, but I’m guessing the inhaler is more of a guise to get a little closer to our curly-haired wonder.

This scene piqued my interest. The struggle is real; Mando is certainly intrigued by his “Prince Charming.” Although he rebukes Vince for the idea of jumping the group of hot hunks, he can’t help drooling himself as he stares intently at the object of his affections. The denial followed by the underlying attraction, and finally, acceptance is laid out so beautifully, I was left entranced. I appreciate the Director’s take here because although Kokoy’s character is depicted as a major example of denial, the depiction of his naked desire is realistic. It’s a blessing in disguise because maybe people who watch this show who have experienced the same might find the strength to accept their inner selves.

The struggle becomes even more evident as Mando scours social media platforms to finally figure out his Prince’s identity – “Barry.” We are again thrown into a dream sequence because that’s how the Director depicts Mando’s inner ramblings. Although he tries to suppress his base desires while awake, it’s the opposite when Mando is dreaming. So as the Dream Barry pulls Mando closer and promises to teach him basketball, he slowly whispers, “Follow your Heart,” and you feel the tension. This dream reflects Mando’s thoughts, so it’s apparent he is trying to convince himself that there isn’t anything wrong with being gay or liking men. What I liked about this shot is that Mando comes to this realization on his own. Most of the BL dramas have characters who don’t accept the changes in their sexuality until someone else points it out. But not Mando; he is different. It could be the basketball scene or the imaginative sequence the next morning in school. In both instances, Mando accepts his attraction to Barry and that he might very well be gay.

But his dreams come crashing when their second encounter ends unusually. While they have fish balls at their regular joint, Barry’s boyfriend crashes the party. I appreciate how Barry openly accepts that he is fluid. I’m guessing at this point he has noticed Mando’s interest and wants to return the same. The only hindrance is the egoistical boyfriend, who is a direct contrast to the humble Barry. I’m still wondering what the draw is between them.
The episode ended on a low note. I’m saying this because watching Mando cry was indeed painful. Mando was making strides in coming to terms with his sexuality, and the knowledge that Barry isn’t single is surely going to cause issues with the delicate balance. Mando is hanging onto a thin thread that can break at any point. I’m eagerly awaiting the next episode because I have a bad feeling about the new dynamics between Krisha and Mando. Will he start dating her instead? What will transpire between Mando and Barry?