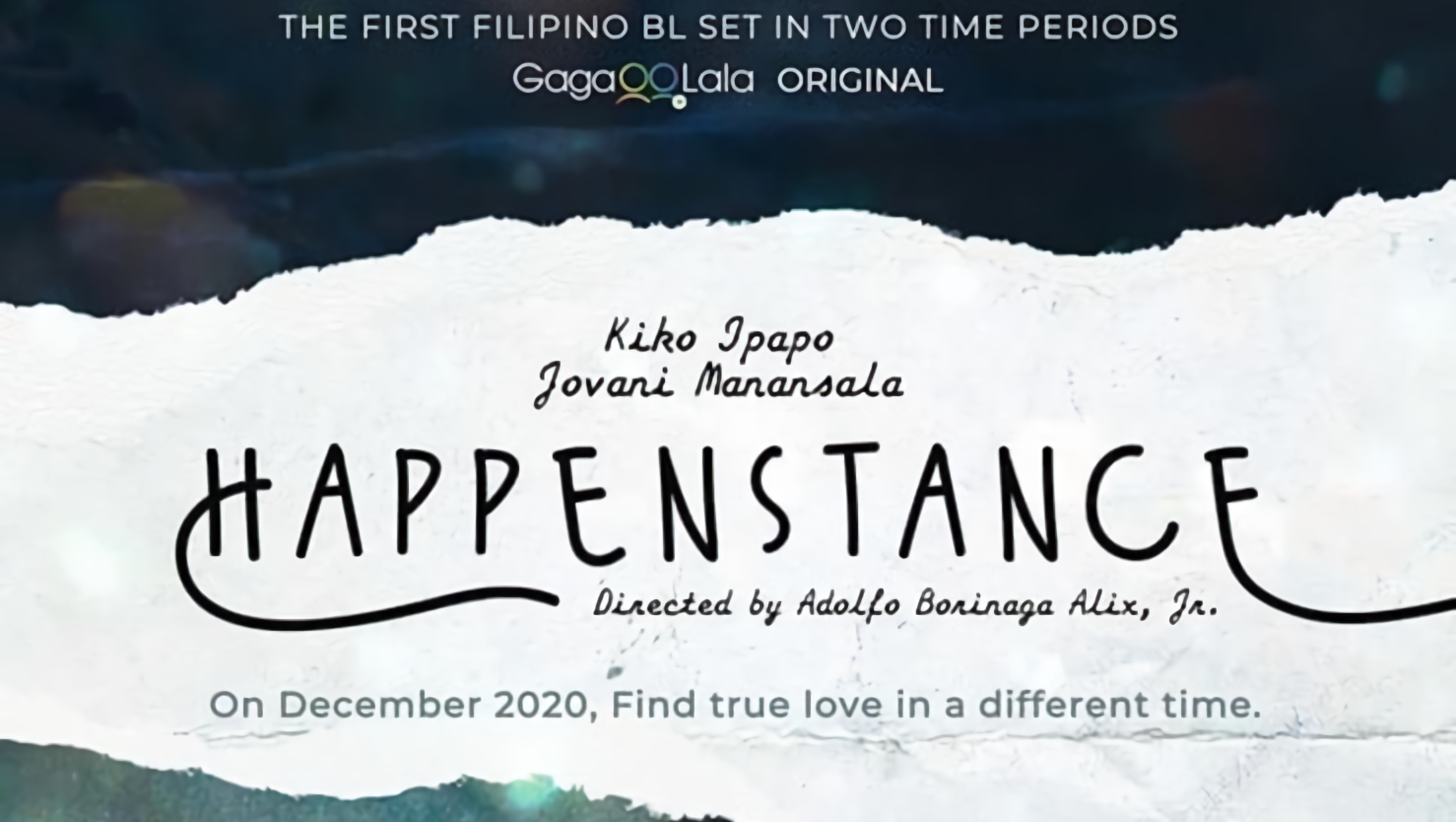 Magic is an unusual and unpredictable happenstance of events that can surround a person. It’s not just fireballs or witches but sometimes simpler, more unusual things like a letter from 1970 falling out of a ceiling today. No one was stationed in the small space above the ceiling and dropped it down, but it’s there all the same. Subtle bits of wonder is the basis of the new series “Happenstance.” Two young men separated by decades find a way to each other through letters and glimpses in mirrors as a curious magic works between them.  (Editor’s Note: Shortly before airing, GagaOOlala made an announcement that this Series would play for free on their YouTube channel, linked below)

Wade (portrayed by Kiko Ipapo, IRL a YouTuber and Influencer) returns to his childhood home to mend a broken heart. Jose Manuel (portrayed by Jovani Manansala, a student and YouTuber) lives through the Marcos era Philippines in the seventies. Both men converge at a turning point in their young lives when, by simple happenstance, their lines of fate cross through letters, the former mode of communication, pre-email. The series is set and filmed in the Philippines, with beautiful sets and an amazing supporting cast. The sets are both perfectly fitted for the eras they are supposed to represent. Wade’s home is older, has a grayish hue to everything but is still well kept, while Jose Manuel has the same home in the era when it was built. Everything is polished, cared for, and above all, splendid as it is the home of an important person. Jose Manuel’s home has a more rich and vibrant color to it. The use of color highlights the time the episode takes place.

The attention to detail keeps the viewer feeling as if they have stepped into the different times the show takes place with ease. I never felt confusion from one transition of time-based on which character was being shown and the life they lead on display. Even the lighting of scenes was used to showcase how I should feel as the scene played out. An intimate moment between two men, for instance, was lit up with neon lights set against darkness. The two men in the scene were the focus, and the lighting showcased their expressions and gave a real sense of intimacy.

For Jose Manuel, living in the turbulent era of Ferdinand Marcos Sr., being different meant enduring physical and emotional torture. Many were suspected of being rebels against his dictatorship – the fact that Jose Manuel chooses to ignore in his desire to find his Luis. It’s perfectly shown in a tear-at-your-heartstrings manner as his parents refuse to allow him to leave their mansion to find Luis. Instead, he writes letters he won’t send and hides them in a place in the ceiling for when he can.

Wade returns to his childhood home to mend his broken heart. He is greeted by the home’s caretaker, Sepa (portrayed by Erlinda Villalobos, a veteran Pinoy actress who has played in numerous shows and films), who attempts to get him to think positively. Soon they are joined by Wade’s mother Vivian (portrayed by Rosanna Roces), who has had her own heartbroken. The two bond over their loveless lives over cups of wine and conversation.

The charm of the series is in full effect as it takes the time to introduce you to each character and allows them time in the script. With each line and how it’s delivered, I find it easy to feel like I’ve known the characters for years. This outcome is a testament to the skill of the actors as they interact with one another. Wade treats Sepa like a maternal grandmother, which is truly sweet. It’s evident from his posture and how he listens that he cares for her like his own. Vivian knowingly dismisses Wade’s broken heart while lamenting her own, which to me eloquently displays her desire for her son to minimize his sadness in favor of finding better love later.

The trio set out to clean the home and getting rid of the past, as Vivian had read in a self-help book. Set among the almost dreamlike lighting, they get to work, and the lean Wade in cut-off shorts and a tank top is the focus of this section of the episode. While cleaning, he notices a loose ceiling tile and finds things belonging to Jose Manuel hidden there. Among them is the letter, which is where the episode switches perspective.

Instantly the color practically explodes on the screen as we see vibrant reds and browns, and everything is a little brighter. Jose Manuel is writing his letter and is set to go on an adventure to find his lover, Luis. This plan is promptly cut short by his father, portrayed by Bembol Roco, a seasoned actor who has starred in many shows and movies. Referred to as “Sir” by his wife, Daling (portrayed by Angeli Bayani, an actress who played with Bembol in “My Special Dad” among other roles) stands at the door, trying to talk some sense into him.

People may marginalize Sir’s actions as homophobic, but I hope they don’t. Sir has his reasons for being so firm. Just because he is angry at Jose Manuel for defying his rules (orders), it doesn’t mean he is doing anything from any homophobia. He just knows what is outside their door – the horrors that await a naïve twenty-something trying to avoid doing something stupid. Sir doesn’t want that for his son, so he does what he can to keep him safe. This scene starkly puts into perspective the cultural differences Jose Manuel and Wade have.

While Wade can wear bracelets and jewelry and act as an out gay man, Jose Manuel can not. It might sound a bit cliché, but different rules in a different era. Wade has more freedom because, by his time, Martial Law has long since become long-past history, while Jose Manuel has no freedom. Even the books he read can be misconstrued as rebellious. I wonder if that was director Adolfo Alix Jr.’s intention for making Jose Manuel’s scenes so vibrant?

The episode takes a turn for cultural education as we watch Jose Manuel be briskly taught what is happening outside their door. First, by a gentle and understanding Daling, and then by a proud Sir who both explain what is going on in their own words. It’s such good writing as both say just enough to explain the terrifying times in which they live. These reasons are explanation enough for any non Pinoy person to grasp while keeping the details to a minimum.

The episode transits back to the present day as Wade explains the letter to Vivian and Sepa over breakfast. Vivian has little patience for it and makes it into a cute joke, while Sepa watches with a grave expression on her face. Ignoring Vivian’s advice to throw it away, Wade instead responds to the letter, ending the episode with a haunting song playing throughout.

Episode 1 is a strong start to a series, shot like a film. I love that the producers don’t shy away from exposition shots; instead, they use them effortlessly. The music that plays for these unspoken moments fits them like a glove. A good example shows Wade standing over the pool water. Those flashbacks, Wade’s swimming, and his pensive expressions as he remembers his ex-boyfriend are all cleverly filmed. Kiko as Wade was an excellent choice as the actor brilliantly commands scenes with a quiet presence. He stands still, his eyes moving over sets as if making an effort to feel fully at peace. Even with the rest of the world waiting for him to hurry up and heal, it’s his time to grieve. Kiko plays a wounded man as well as the best of them, and I wonder how he will play sensual and happy.

Jose Manuel’s experience evoked so much feeling from me as I watched his desire to see Luis doused with the cool water of reality. The way the time period is visually conveyed is very well done. Something Director Adolfo also does very well is to use every actor to their talents, and every scene he shoots is on point as he leads you through the environment he’s created. I never felt bored but instead constantly curious as the episode meandered in different directions.