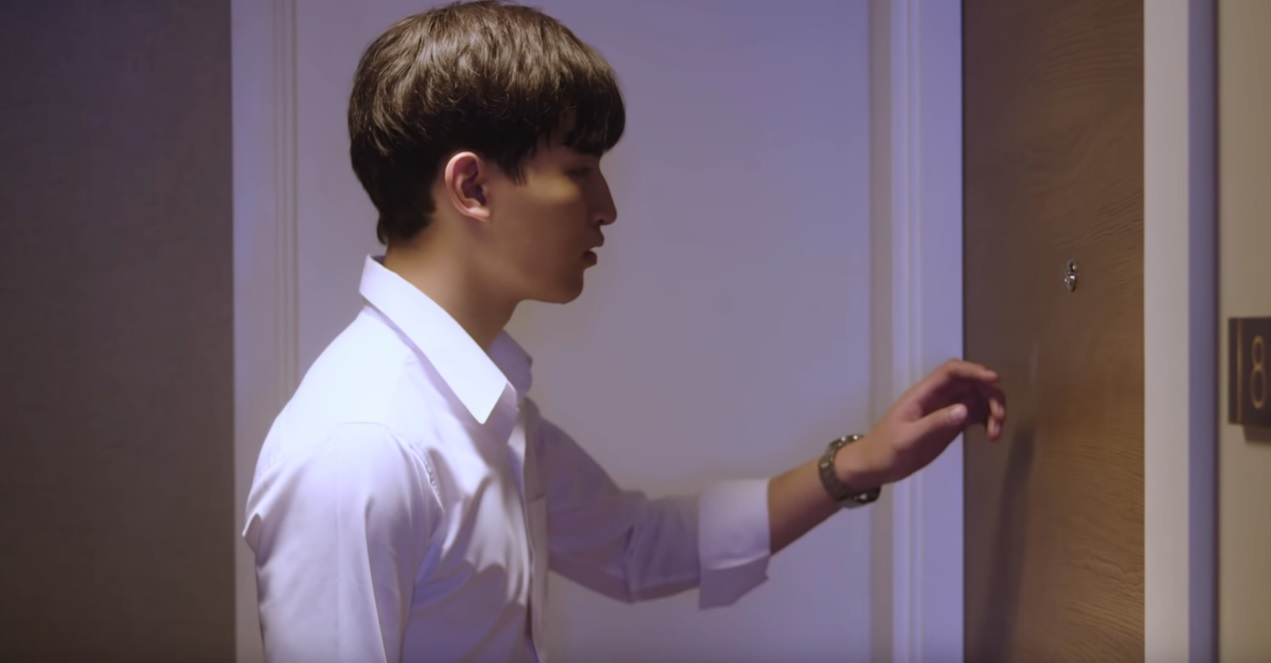 Until We Meet Again – Episode 9 [Review]

It took me a while to settle down and try to become more analytical about this episode. Act 3 is especially tough to watch.

After just last week of singing the praises of who I thought had the best performances in the series, this episode comes along and forces me to reckon with a new talent that’s been present in this series from the beginning. This episode clearly belongs to “Ohm” Thitiwat Ritprasert, who plays Dean like we’ve never seen him.

We open with Korn laying in a field of green grass, seemingly alone. Within seconds Intouch appears over Korn’s face. The scene is shot at a slow pace, mostly close-up, and not a lot of dialog with the actors (Nine and Earth as Korn and Intouch respectively) doing most of the communication of love and caring between each other with facial expressions, eyes and smiles. The scene ends peacefully.

Dean’s alarm is going off, he awakens and the scene suggests that the previous scene was a dream Dean is experiencing, this time less urgent, though it affects him the same way. Dean touches his lips, and wipes his eyes, as if remembering the actual physical contact during the a moving kiss with Intouch, and he continues to weep.

Later that morning, we see Pharm, looking for a particular book in the school library, which it doesn’t have, but a librarian points him to the faculty of Business Administration library (Dean’s faculty), which has copies to check out. This and the following scenes serve the purpose of getting Dean and Pharm together in the library. During this process, Dean has a conversation with Win, who surprisingly comes up with good suggestions regarding the seeking of truth, and avoiding the paralysis of fear.

As watchful bystanders, we, the viewers, need to remind ourselves that we know far more of what’s going on in the tragedy-filled lives of the series characters than the characters themselves. They’re learning as we watch them learn. We know why Dean is now more demonstrative of his affection to Pharm.

Pharm is really taken aback with this initial display in the library to the point of protesting. Dean continues the deep embrace, pulls away and says “Pharm, I love you”. Fluke’s character displays the gamut of positive facial expressions, eyes full of emotion, and waits a full 30 seconds to respond back “I love you, too,” and they continue their full embrace. The knowledge we as viewers possess makes this an even greater emotional experience.

They both head back to the study room and we get a bit of comic-relief to lighten the mood, with Dean at his normal, imperturbable demeanor, even setting some of his classmates straight about their flirting with his boyfriend.

He and Pharm head out, and in the parking lot, Pharm expresses his concern about stresses affecting Dean. Dean grabs and slowly kisses Pharm’s hand, holds it to his cheek and tells Pharm he’s “fully charged”. They part ways, with scenes intercut between Dean thinking pensively, and Pharm driving home, the happiest we’ve seen him. This full 3 minute segment just serves to show us their relationship building, slowly, inexorably, towards what is coming.

Act 3, where even the pace of the musical vocal tracks have slowed down dramatically to convey mood. Dean has made it to his destination as scheduled. He enters Sorn’s restaurant where he and Sorn share a silent acknowledgement. Dean proceeds to a private room, where Sin, looking pensive, and holding a manilla envelope, is waiting for him.

Sin asks Dean why he wants to know about “these two people” (Korn and Intouch), and that he’s aware of Dean’s dreams of someone via his boyfriend Sorn. Dean tells Sin more about the dreams, the endless searching, and finally finding that one person. Since finding Pharm, Dean’s dreams are happening more often, with more detail, and affecting him more. He goes on, saying that his and Pharm’s dreams are now connected as well.

“In our dreams, our names are Korn and Intouch”. Sin is listening attentively, and Dean continues saying that he is “quite sure, one of them committed (a) suicide. Now, I am more certain that I was Korn, who shot himself on that day”.

Sin is stunned, and seemingly doesn’t want to open that envelope.

The reveal is inevitable, and Dean asks to look at the damaged photo of what we know is Korn and Intouch, with Korn’s image intentionally torn out to hide his identity. With Sin watching him closely, Dean stares at the photo knowing the remaining person is Intouch. In Dean’s mind, we see an obviously uncomfortable Korn, along with the endlessly effervescent In, who’s coaching his Best Friend (Perth Tanapon Sukhumpantanasan) behind the camera.

Dean reads out the name on the report “Intouch Chatphokin”. Sin explicitly states that Korn committed suicide first, then Intouch did likewise. Sin pushes him if he recognizes the surname “Chatphokin”. Dean looks confused, and we learn that Dean’s mother’s maiden name is “Chatphokin, Alin Chatphokin”; Dean’s grandmother was “Antika Chatphokin”, the sister of his Granduncle “Intouch”. Dean is beyond devastated.

Quickly, Dean is driving to Pharm’s home. He looks lost. He feels vulnerable. His normal stoicism and his reserved, quiet character, are suddenly eviscerated here with an emotional landslide of despair, fury, and helplessness, all directed at Korn.

Ohm puts forth a performance that still brings me to tears as I write this. I wasn’t expecting him to be so very good. All of this, while maintaining a relatively sheer and fragile veneer of calm and coolness, within the locked boundaries of his character. This time, there’s a new trait – vulnerability. P’New said on Twitter that they got this scene with multiple cameras, in one take. Astonishing.

The lump in my throat is back. The weight on my chest is oppressive. I’ll continue later.

Dean arrives at #802, and after a minute or so of staring at the door deep in thought, he knocks. He waits and pulls his own key out as Pharm opens the door. Pharm sees Dean’s tear-streaked, exhausted face, and when he reaches to caress Dean’s face, and Dean relaxes visibly, and asks if he may stay with Pharm tonight. Inside, they are silent while Pharm searches his closet for something that Dean can wear. They exchange few words; their communication is subliminal.

Dean comes out of the shower and finds Pharm asleep on the couch. He lovingly takes Pharm into his arms and carries him to the bed. He asks Pharm why the couch, and shy Pharm just talks about the small size of the bed. At this point, Dean will have none of it, and lays Pharm on the bed and climbs over and straddles Pharm, and slowly leans down to touch and kiss Pharm. Maybe what started out as tender lovemaking stops as an exhausted Dean just lays his head on Pharm’s chest. Pharm starts gently stroking Dean’s hair, as if saying ‘it’s OK, you with me now, and everything will be OK.”