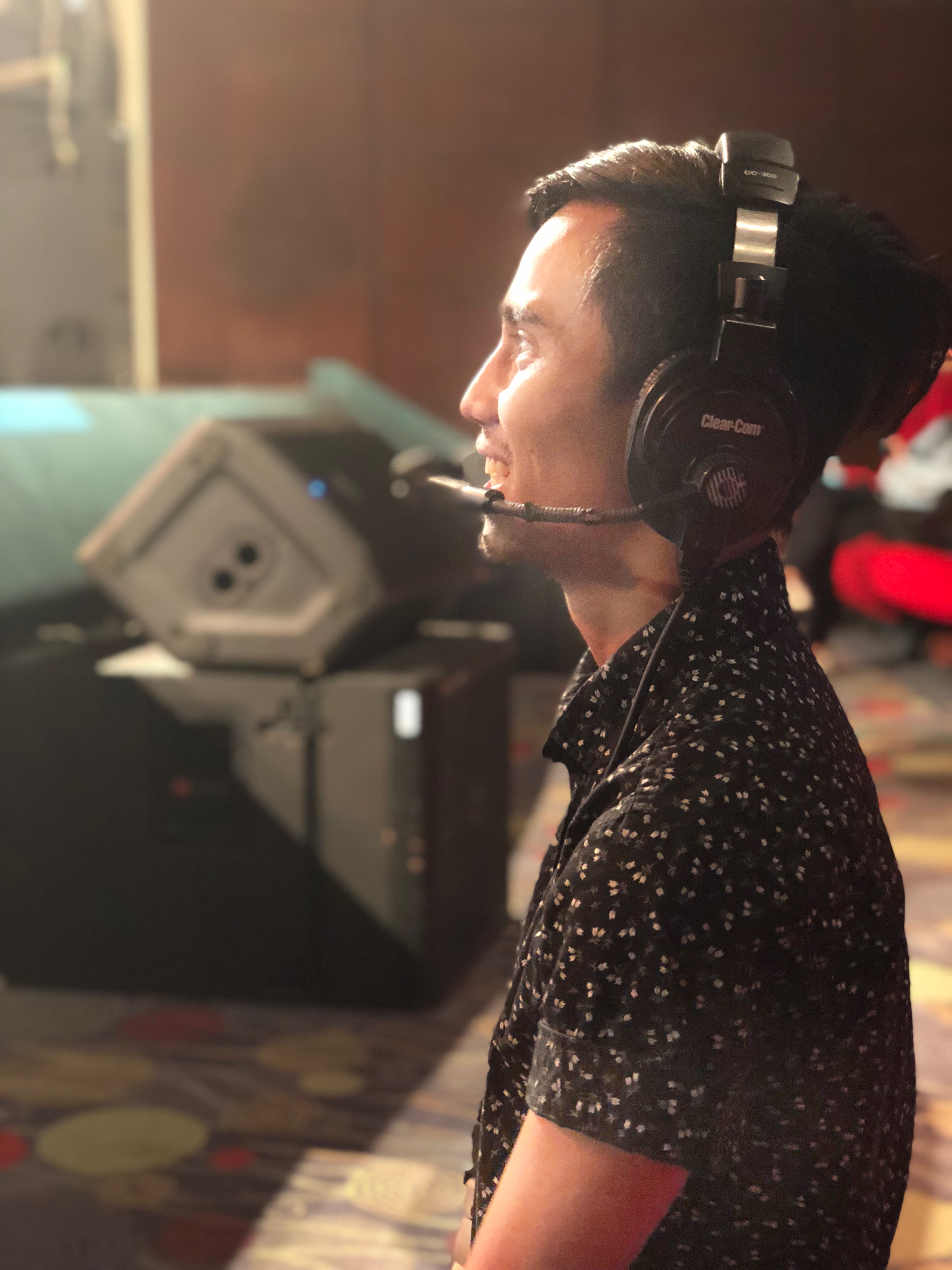 Spotlight on Kristian Kabigting, with AsterisK Entertainment + My Extraordinary, the Series!

Just recently, Twitter is abuzz with news about an original Boys Love series from the Philippines. A quick search and confirmation from Twitter friends indicate that it’s true. AsterisK Entertainment‘s Kristian Kabigting spearheads what is a milestone for BL shows in the Philippines. He certainly has the credentials to produce one – in fact – there are three BL shows up for broadcast.

Get to know about these BL shows, the producer-writer himself and the story behind the productions [after the jump!]

I guess the biggest question is – what took you so long? I think people appreciate that you spearheaded this new BL series with local funding and a local cast. Could you give us a bit of background as to how this idea of yours became a reality? Let us know about My Extraordinary’s inception and ultimate goal to air on TV5.

I became a BL fan way back in 2017 when a close friend introduced me to the series SOTUS. At first, I was hesitant to watch but out of curiosity since he kept on pushing me, I watched it! Surprisingly, I was hooked and followed up with the sequel, SOTUS S. From there on, I became a fan and watched all the available Thai Series I could find online. I even made sure that I watch at least 5 episodes per night before I go to sleep.

The idea for My Extraordinary materialized this year. My first love was script-writing and before taking up artists management as my full-time career, I was part of Ricky Lee’s script-writing workshop. I became one of the brainstormers for ABS-CBN Star Creatives (Think Tank). I think this year is the perfect time to go back to my passion, together with Asterisk’s big plan to venture into TV and movies by starting off with My Extraordinary.

Originally, our opening series was to be A Kiss To Remember. But after watching one of the current Thai BL series, I was amazed by its storyline, the screenplay, the twist, and even the acting. After that, My Extraordinary came to be.

We understand that your production company also produces shows featuring Thai actors. We just saw you with Gun Atthapan, who was recently in Manila to receive an acting award. How long have you been involved in the BL community here in Asia? Give us a bit of a background about yourself as a producer, content creator, writer.

My involvement in the BL community started this year. The main reason is that I really want to study to see how the BL industry works, how it is operated, and why it so popular right now. I was fortunate to attend the recent Asian TV awards. However, I was actually not part of the production team, nor did I have any involvement with the event. I was just one of the guests and had been invited to the event by one of the Partners of Asian TV Awards here in the Philippines.

Since many Thai Actors were there, I took the opportunity to attend and start “networking” as well. You know, in this business, connections are essential to augment and to sustain your business. Most of the famous and prominent people in the entertainment business were there, so it was necessary. At the time, I felt somewhat overwhelmed and just a bit awestruck at that time because that was the first big event that I’d ever attended.

I’ve been attending local showbiz events here since 2010, but this event had a different feeling as I was surrounded by famous international stars. This year we were going to produce the fan meeting of Off Jumpol & Gun Atthaphan a.k.a #OffGun. It was going to happen in May, but because of the COVID-19 outbreak, the event has been postponed and rescheduled. Our new target date will be October of 2020. We have another fan meeting in the works for an additional fan meeting for another famous Thai BL couple as well.

How about telling our readers a bit about the upcoming My Extraordinary. What is the storyline – without revealing too much of course!

My Extraordinary, from the title itself, is about a love story between two people which revolves around past events of every character and the “lies” beneath the story that play an important element in the series. Enzo Santiago will play the role of “Jonas”, a Forensic Science student, and Darwin Yu will portray “Shake”, a Law student. I can’t reveal much more for now. Eventually the storyline will be slowly revealed in our upcoming promos.

How did the audition go for the show, and how were the two leads chosen? Tell us a bit about Enzo and Darwin.

Actually, there were no auditions held for My Extraordinary. I personally handpicked actors Enzo Santiago and Darwin Yu to play as the lead characters for the series. The reason why I chose them because I strongly believe in their capabilities as actors, and instinctively felt they were the right choices for the story. I know they will give justice to their characters, and I know they will work on it 110%.

Also, one thing I like about Enzo & Darwin – on the day I offered this project to them, they accepted it with no hesitation or judgement whatsoever. From the moment they said “YES” to me, I told myself “these are ‘ACTORS’ – the real ‘ACTORS’ that we should have.”

How different or similar is the series compared to the current crop of Thai BL series?

My Extraordinary is totally different from the usual television series we’re used to seeing. You won’t see any violence, mistresses, or families fighting over wealth, action dramas with guns, or wars here. We are done with that kind of storyline, and I believe it’s time to offer something new on the table. This time we will be focused on the characters need and characters emotions.

Normally, BL series runs purely on the actors’ chemistry and physical attributes like “2Gether The Series”. There are usually no backstories at all, no character references. It’s more about the physical attributes and needs of the characters. But people love it and still enjoy watching it, and because I think that’s the trend right now.

As both a stakeholder in the business and artistic side of a BL show, how do you divide your time between managing the technical and business aspects verses developing the content with your story?

It is quite a challenging yet very exciting job being the President of Asterisk Digital Entertainment and managing the near-40 artists in our talent pool, while at the same time writing My Extraordinary. At this point, I’ll finish writing the 8 episodes for My Extraordinary and 12 episodes for A Kiss To Remember. Then I will focus on handling the artists, since I want to spearhead these first 2 BL Series here in the Philippines under Asterisk and TV5.

Where do you get your inspiration? Any particular filmmaker, actor or someone you look up to?

I have many inspirations in life and so many people I admire, and to be thankful for. Right now, my inspiration is GMM-tv. Meeting with them personally impressed me with the way they handle their artists and I’d really like to apply their style of system management at Asterisk Digital Entertainment. I’m the kind of person that if I want something, I will do everything to get it, whatever it takes. I am so blessed right now that everything is happening according to plans.

Do you have a message to our local BL fans out there?

BL fans are continually becoming a bigger force in this industry now. Girls, girls at heart, and boys, are now addicted to BL, no matter the age or status in life. My message to all the fans is to be inspired and sensible enough not to compare actors too closely, because each of those actors is an individual, and has a unique personality all their own.

And to all Filipino BL fans, this is it! I know you’ve been waiting for this to happen. Finally, we will have our own BL series. I’m humbly asking for your support for my artists, Enzo Santiago and Darwin Yu for their first BL TV series, My Extraordinary. I assure you this show, along with these actors being cast in it, will not disappoint you.

The Psychomilk team is thankful to Mr. Kabigting for this interview opportunity. Stay tuned for our interviews with the lead actors – Enzo and Darwin!